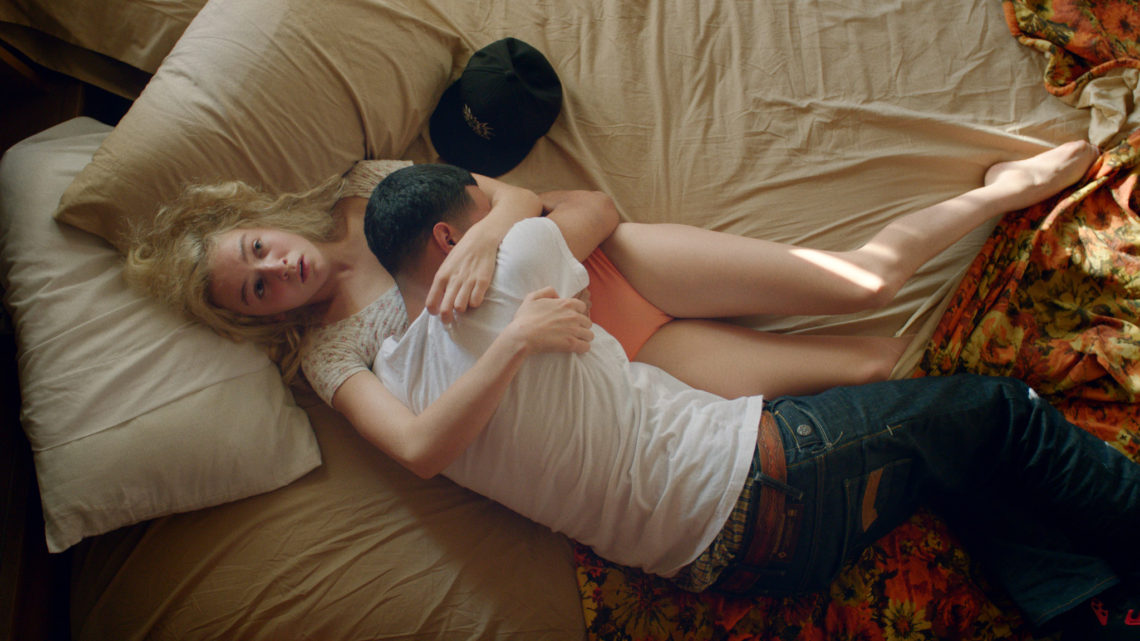 “I always figure it out,” says Leah (Morgan Saylor), the college-student protagonist in Elizabeth Wood’s debut film White Girl, to her coke-dealing lover Blue (Brian Marc) as he sits in jail. She says this with a half-giggle and a smart-aleck smirk, despite sitting amongst prisoners facing serious prison time, because it’s likely true. It goes without saying that Leah has existed in a bubble of privilege her entire life. A New York transplant from Oklahoma City, she’s a rising sophomore, has a cushy unpaid internship at an artsy magazine, and she and her friend Katie (India Menuez) have become gentrifiers by moving into an apartment in Ridgewood, Queens. She figures things out because she projects a culturally safe, politically protected image that allows the world to figure things out for her. But as soon as she falls in with Blue after trying to buy weed from him, Leah quickly learns that an ugly, predatory world exists just outside of her periphery, and she can never turn back.

This is “the point” of White Girl, a cautionary tale of one girl’s experience with drugs, sex, body commodification, America’s justice system, and more drugs. Wood primarily conveys this through formal provocation, filling the frame with darkly lit grit and grime. She shoots in uncomfortably intimate close-ups, low angles, and frequent montages, capturing the immediacy of a young life pushed to the brink by casual substance abuse and endless partying. Michael Simmonds’ hazy, sleazy photography emphasizes the danger of Leah’s circumstance but also the excitement and the risk-taking fun. While Wood’s script puts Leah through the ringer, she doesn’t condemn her or her actions. If anything, it demonstrates that anyone with Leah’s trust in her abilities and surroundings could fall down a similar path.

Unfortunately, Wood’s tiresome script also traffics in trashy shock value and surface-level characterization. This is undoubtedly on purpose, as she tries to both subsume the audience in Leah’s coke-addled pleasure/desperation and provide enough distance so as not to glamorize the exploits, as if that’s possible. Yet this dual-pronged effect ultimately renders her end game facile and fails to justify the provocation as anything other than empty. Once Leah commits to both getting Blue out of jail and selling the rest of his coke to pay the lawyer (Chris Noth) and Blue’s scummy supplier (Adrian Martinez), White Girl falls into a predictable, one-note rhythm. She does drugs, sells drugs, has sex with her douchebag boss Kelly (Justin Bartha, in easily the best performance of his career), does more drugs, goes out clubbing, sells more drugs, wakes up in a stupor. Rinse and repeat until she finally learns her lesson the hardest way possible with two especially violent events. It’s designed to appall, but it mostly bores because Wood defines Leah entirely by her actions. By the time she rails blow off Kelly’s dick in the last third of the film, it’s just another thing that happens to this girl rather than a new debasement. White Girl obviously elicits sympathy for Leah because she’s a human being, but that’s all it elicits because we don’t actually know her in any meaningful way.

It’s worth nothing that Wood’s strategy with White Girl isn’t unsound or illogical. She wants to dunk the audience’s head in shit and then yank them up for air so that they become aware of how white entitlement shields people from uncomfortable realities. Leah has little to no knowledge of how the legal system unfairly punishes black and brown bodies relative to white ones. But she learns. She has little to no idea of how older men frequently exploit the bodies of young women with reckless abandon. But she learns. She has no conception of how a drug-taking lifestyle can heartlessly swallow up months of your life. But she learns. (Or maybe she already knows these things and goes forth anyway. White Girl doesn’t give much indication either way, but I lean away from that interpretation on good faith.) But Wood accomplishes this very quickly, pretty much within the film’s first half-hour, then keeps going, if only to illustrate what happens when someone doesn’t understand that concept until they’ve been pushed off the cliff. Anyone with half a working brain will comprehend Wood’s intentions long before White Girl’s conclusion, and anyone who has been on the receiving end of casual white privilege might not have the patience to make it that far.

White Girl has its bright spots. Saylor’s performance commands attention because of her clear commitment to the material and ability to convey internal emotions via a blank expression. Michael Taylor’s editing keeps the action moving at an enthralling clip, even when the script goes south. Plus, Wood has an eye for arresting imagery—there’s a genuinely heartbreaking shot of Leah and Katie in a silent, naked embrace as they sit on the floor of their shower while the water rains down on them. Her direction achieves exactly what it sets out to, and she clearly has a facility with actors since she acquires compelling performances from all of the young actors (Menuez especially shines in her small role). Yet, none of it is enough to save her well-intentioned, misguided film. Though provocation is a legitimate formal and narrative strategy, the substance must be strong enough to sustain the incitement. In this case, White Girl’s substance is strong, but the execution is too flawed for it to be anything but a cheap and dirty high.