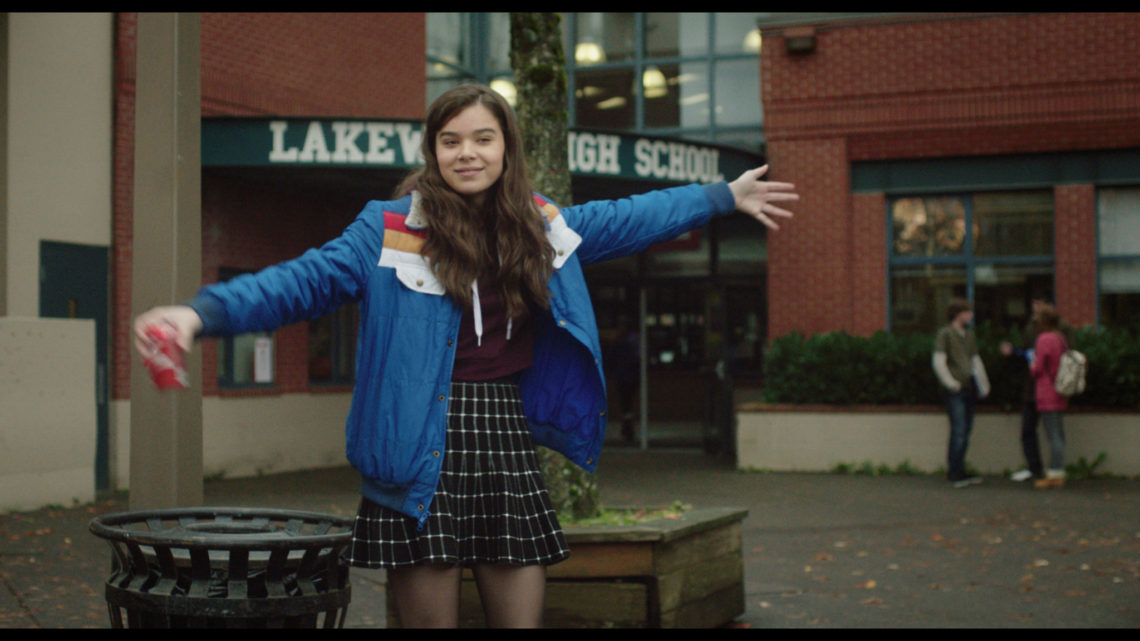 Now Playing: “The Edge of Seventeen”

Vikram Murthi looks back a week in this critic-at-large column to review the new teen movie "The Edge of Seventeen."

If there’s one adolescent trait that Kelly Fremon Craig, writer and director of the new film The Edge of Seventeen, acutely understands, it’s the rage—the messy, misdirected resentment that many harbor in their teen years for perceived sleights, cosmic and trivial. Though indelibly recognizable in real life, this youthful fury is too often absent in on-screen depictions of teenagers for any number of commercial or creative reasons, most of which presumably revolve around flawed ideas of “likability.” But Craig’s debut feature sets itself apart from the teen drama rabble by embracing that anger wholeheartedly and filtering it through a loquacious, self-righteous heroine who believes the world is out to fuck her over in every imaginable way. The Edge of Seventeen captures unadulterated self-loathing and its chaotic manifestations better than almost any film this year (save for Kenneth Lonergan’s Manchester by the Sea), rendering it the most compelling teen film this decade, if only by default.

Much of The Edge of Seventeen’s success concerns Craig’s impressive handle of the narrative and its dramatic stakes, conveying the heightened emotions of youth as well as their relative insignificance in the grand scheme of things. Nadine (Hailee Steinfeld in a tour-de-force performance) has had a rough few years after her father suddenly died of a heart attack, but she could always count on Krista (Hailey Lu Richardson), her best friend since second grade. That changes when Krista begins dating Nadine’s popular brother Darian (Blake Jenner), one of many targets of Nadine’s ire. Lonely and enraged, Nadine subsequently spirals into depression, lashing out at everyone and herself for being dealt such a crap hand. Craig treats Nadine’s emotions with the utmost sensitivity, understanding that they’re based in legitimate justifications, but that they’re transient feelings which will ebb and flow with every passing year. This distance, coupled with the immersion into Nadine’s psyche, provides The Edge of Seventeen with necessary wisdom that elevates it beyond the genre’s blinkered melodramatic trappings.

More so than Craig, Steinfeld does the heavy lifting in the film, communicating her character’s layered emotions with mastery. At almost every point in the film, Nadine is a ball of defensive sarcasm and unfounded superiority. She rails against everything—her family, her classmates, even God on a couple occasions—but all of her bluster stems from an abiding sense of self-hatred. In her most vulnerable moments, she wonders aloud how anyone could ever like her, and how she finds nothing of value when she looks inside herself. These scenes clarify and illuminate the scenes of her throttling rage towards ostensibly innocent people. But during these moments, Steinfeld never falls into affectation or unrealistic worldliness that plague inauthentic movie teens throughout time, a la Juno from Juno or Charlie Bartlett from Charlie Bartlett, two films released in the same year. She simply embodies the voice of an intelligent, thoughtful young woman thrust into internal disarray.

While it’s refreshing to hear a young character articulate feelings of existential disorder and self-loathing, Craig doesn’t simply voice those feelings, but instead provides a three-dimensional portrait of them. She mainly accomplishes this by depicting how Nadine’s emotional chaos affects those closest to her. We see Krista become fed up with the one-sided nature of their friendship, how she’s always supporting Nadine without the promise of reciprocation. We see Darian’s frustration with Nadine’s inability to recognize his own plight and how her actions negatively affect their unstable mother (Kyra Sedgwick). We see her teacher and reluctant mentor Mr. Bruner (Woody Harrelson) treat her histrionics with compassion and playful mockery because he recognizes she’s stronger than she realizes. Craig acknowledges that low self-esteem can evolve into weaponized narcissism that unintentionally hurt others, like Nadine’s classmate Erwin (Hayden Szeto), who harbors a crush on her but is inevitably strung along by her teasing, self-serving behavior. Craig never paints Nadine in a negative light necessarily, not even when she’s being particularly cruel; she just recognizes that undeveloped empathy is a mark of youth.

The Edge of Seventeen contains some frustrating elements, like its nondescript visual aesthetic (excluding Carla Hetland’s costume design and William Arnold’s production design, both of which are superb) and an overly sentimental prologue that recalls a similarly unnecessary one in Broadcast News, directed by The Edge of Seventeen producer James L. Brooks. But these are relatively minor flaws in the face of The Edge of Seventeen as a whole, which subtly defies expectations every step of the way. It’s remarkable that the film contains a happy ending that spits in the face of “closure,” providing narrative resolution but stops well short of putting a period on the emotional damage or fractured relationships. It’s significant that it never offers a solution to Nadine’s troubles but instead just portrays their daily reality. It’s energizing to hear characters act recognizably cruel to one another, or to see a depiction of depression that doesn’t also feature a 101 lesson on the disease, or to feel like the harshaness of youth is taken seriously but not too seriously. Craig has constructed a film that embodies tumultuous youth that neither panders to its target audience or placates them with falsehoods. For that, she and her film deserve our attention.