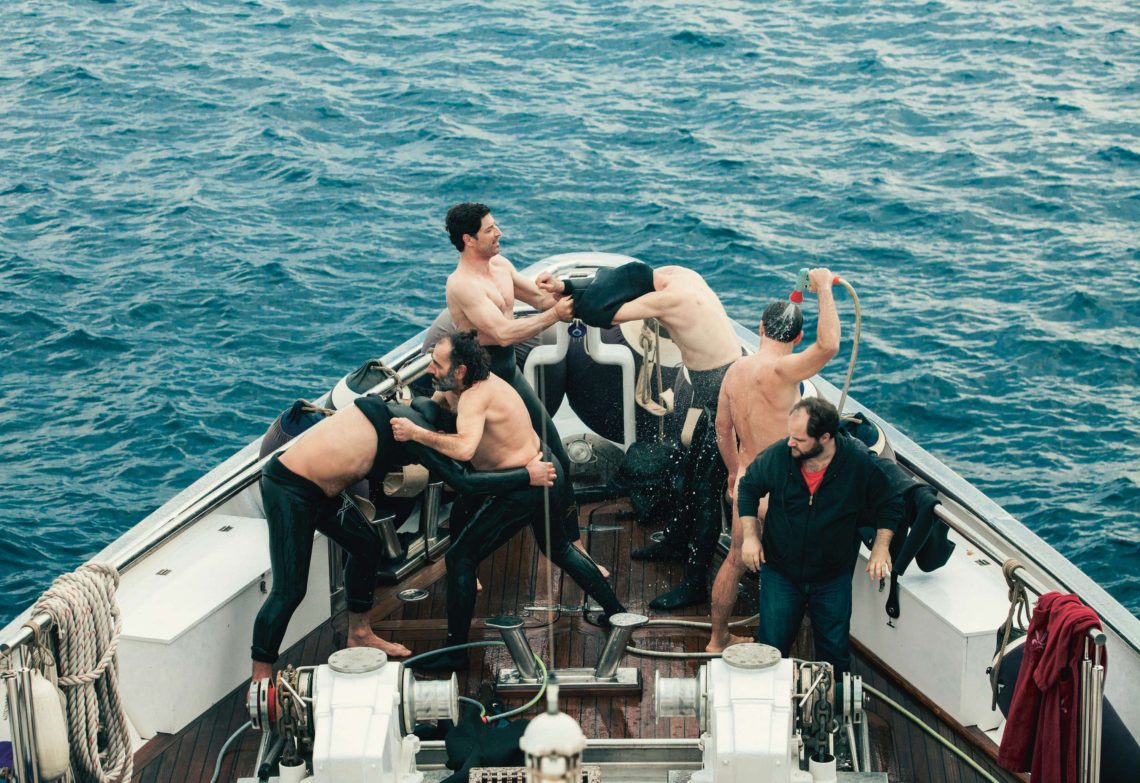 Now Playing: “Chevalier” and “The Ones Below”

I. Straight-faced and grounded but nevertheless absurd, Athina Rachel Tsangari’s deadpan comedy Chevalier adopts a sociological gaze toward the male pissing contest, the basest and most vulnerable of masculine rituals. On a fishing trip aboard a luxury yacht, six men (Yorgos Kendros, Sakis Rouvas, Yorgos Pirpassopoulos, Vangelis Mourikis, Panos Koronis, and Makis Papadimitriou) engage in a expansive competition called “The Best In General,” which essentially turns everything from sleeping to phone calls with the missus into a contest. Each of the six men judge each other and assign points, which will be tallied up by the end of the trip to determine who is “best,” with the winner receiving the ring that gives the film its title. As the film alludes to early on, the game is “about how [they] see each other” and effectively designed to establish a common perception about their status in relation to the group. In theory, they’re trying to determine who is “generally best,” but in reality, they’re just seeing who can best the others.

Naturally, the competition creates divisions within the group, and a low-grade tension infects even minor interactions, but Tsangari and co-writer Efthymis Filippou (who also co-wrote Yorgos Lanthimos’ most recent film The Lobster) don’t inject artificial drama into the proceedings. Chevalier doesn’t build to a telegraphed climax, even when arguments boil over into minor violence, nor are any secrets or concealed emotions revealed in the final act. This is partially because Tsangari precludes much individual characterization by keeping her subjects and their relationships to one another as indistinct as possible—we know their names, professions, and most immediate connections—but mostly it’s because Chevalier defies any neat categorization that would necessitate narrative burdens. It’s primarily an observational portrait of unfettered masculinity, and while it functions as a deconstruction, it’s neither a harsh critique nor a biting satire. Tsangari approaches the material with a scholarly eye, a cool curiosity that’s eager to embrace and judge when appropriate.

Tsangari’s refusal to assign symbolic or metaphorical weight to the competition coupled with the film’s measured pace may prove frustrating for those eager to discover a “point” to Chevalier. It’s in no hurry to dole out laughs or arrive at some prescribed conclusion. However, if you’re willing to ride the ship along with Tsangari and the six men, Chevalier becomes an oddly affecting exercise in empathy, and how our lowest, most exposed moments engender a deeper understanding of ourselves in the minds of others. Tsangari laughs at and with her subjects when they’re measuring their erect penises or quickly putting together Ikea furniture, but she never denies the men their humanity. All of them face their fair share of humiliation during the competition, like when they publicly share the results of their blood work or when one of the men can’t get aroused on command. These men start as vain, prideful creatures preening at each other like peacocks, but they’re eventually broken down just a little bit by a game of their own creation, a game that by the end eventually carries over into the ship’s crew. It’s no accident that Chevalier opens with a long shot of human-like shapes coming ashore, only for us to get a closer look at them with each successive cut.

Though Chevalier relies too heavily on its premise and Tsangari’s insistence on privileging group dynamics over individuals lends the film a vagueness that works against its favor, the film has a chilly energy that remarkably never dips into sneering condescension. Tsangari remains at a distance, but you never get the sense that you’re watching her subjects from far above, like lab rats running into each other in the name of science. Chevalier rides a tricky line and it mostly succeeds, all in the name of demonstrating how fickle and unwieldy common perception can be. 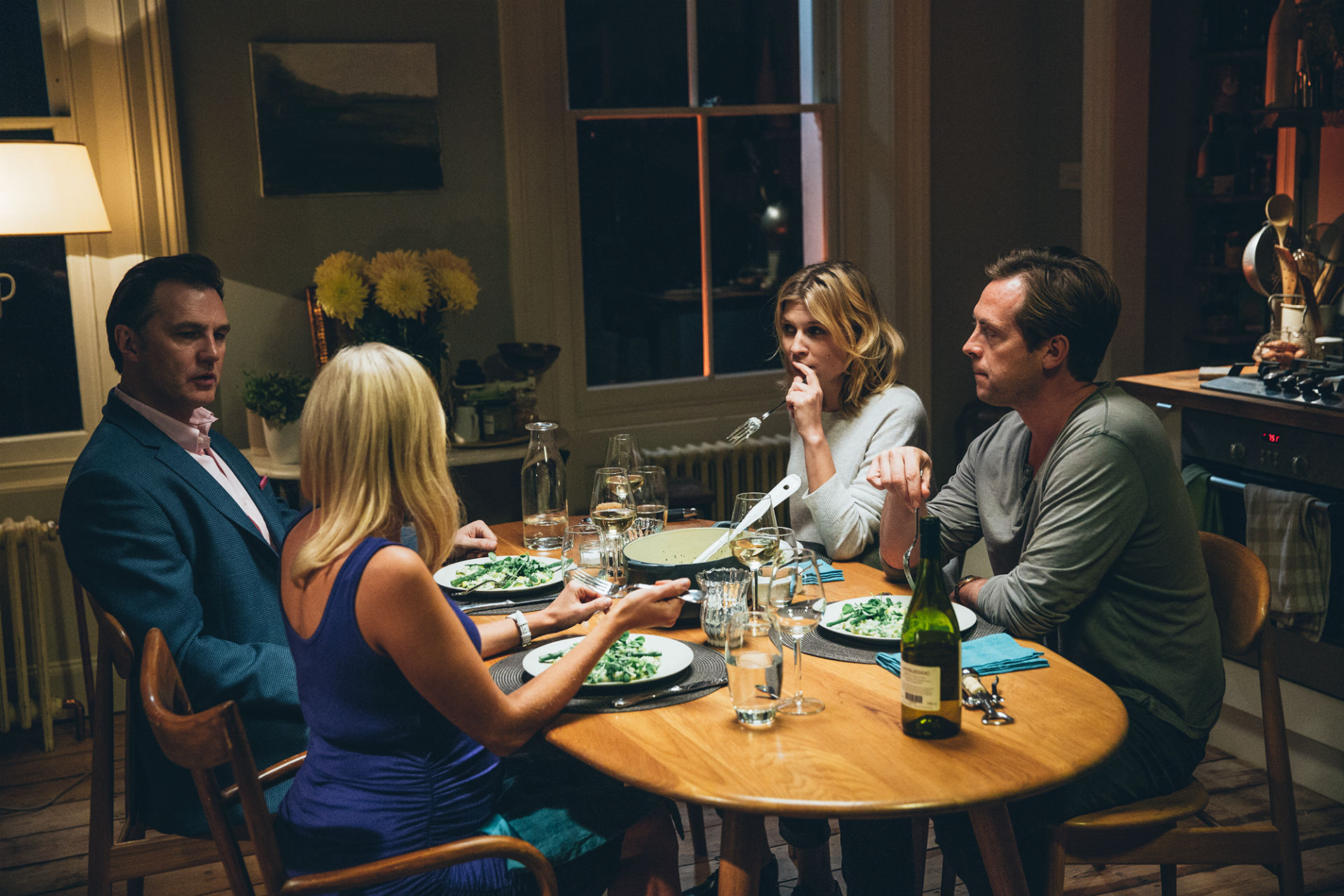 II. Dull and programmatic in equal measure, The Ones Below seeks to thrill with its Polanski-tinged pregnancy drama but mostly ends up insulting its audience’s intelligence with an obvious endgame and cheap stabs at paranoid dread. Happy Couple Kate and Justin (Clémence Poésy and Stephen Campbell Moore) are expecting their first child with everything going smoothly, until Jon and Teresa (David Morrissey and Laura Birn), the Creepy Couple, move in downstairs. Teresa is also expecting after 7 years of trying to conceive, and though she and Kate hit it off initially, a series of accidents at an uncomfortable dinner party causes Teresa to fall down the stairs and miscarry. When Teresa and Jon go away to grieve, Kate eventually has her child, but problems arise when Creepy Couple returns yet again and curious coincidences play off Kate’s postpartum anxiety. Is she losing her mind or is she caught in a psychological battle with embittered would-be parents?

Putting aside the predictability of The Ones Below for a moment (the rhetorical question above should answer any and all narrative questions), first-time director David Farr telegraphs nearly every single “twist” and “turn” with precise images that linger on so long that there might as well be a flashing neon sign on screen that says, “SIGNIFICANT.” The tightly wound script leaves no room for the characters or the central situation to breathe; it mostly chugs along at a clipped pace to a highly foreseeable destination. While Poésy occasionally impresses with her frayed emotions, most of the performances are exaggerated beyond comprehension, none more so than Jon and Teresa’s horrified reaction when Kate remarks that she wasn’t sure if she wanted children in the first place. It’s not a crime that The Ones Below plays in a very familiar sandbox, but it’s damning that Farr and company are content with just going through the motions.

There are a couple of interesting ideas here and there, especially when The Ones Below depicts early parenthood as a waking nightmare, complete with half-awake sniping and the piercing sounds of the world invading Kate and Justin’s carefully constructed domesticity. Alas, the film commits to being the mediocre thriller it was at heart with a third act so flat and unexciting that, of course, Farr spends the last 10 minutes carefully explicating it in painstaking detail. Up until the credits, The Ones Below maintains a veneer of respectability, arguably its worst quality, as if it’s a classy British relationship drama. It would have benefitted everyone involved if The Ones Below had taken a few cues from the camp playbook. At least then, it would be an affected B-movie thriller instead of the lame faux-nightmare that it tries so desperately to be.