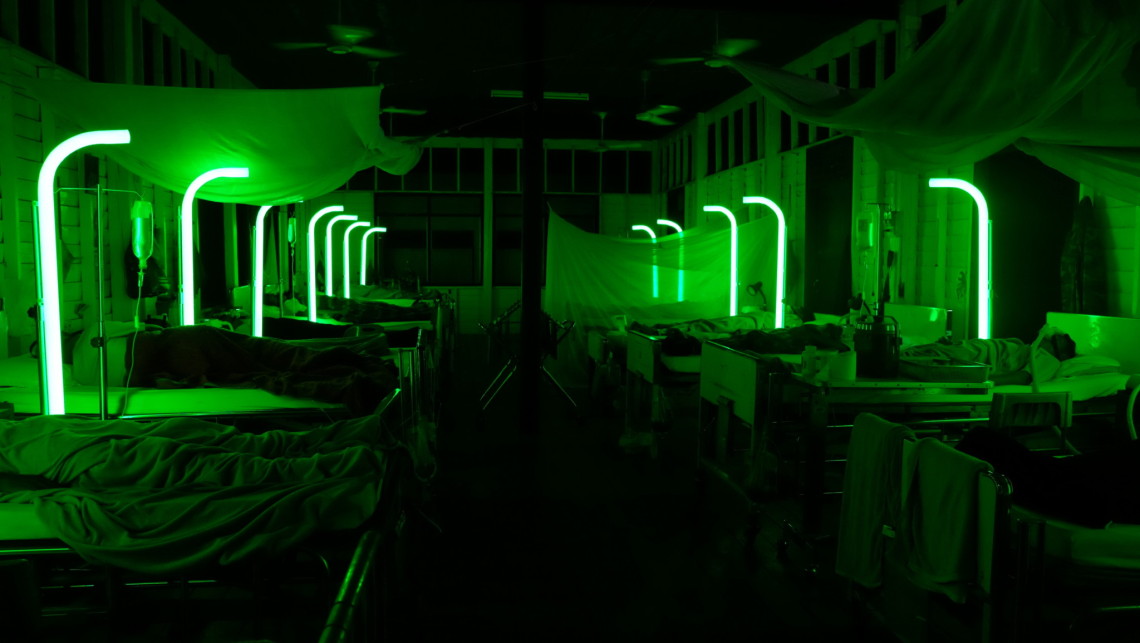 “Our problem is that we think too much. All day, and all night. At night, we call it dreaming. We all dream. We can’t stop them. Thoughts are the same. Since we can’t stop them, we must become more aware,” says the meditation leader at the remote hospital in Cemetery of Splendour, the latest film from Thai director Apichatpong Weerasethakul; however, known or unknown to the meditation leader, the hospital itself is a surreal space that enables dreams and thoughts to intermingle. A former elementary school built on the grounds of an ancient cemetery of kings, the hospital houses many soldiers suffering from a mysterious sleeping sickness. Though the doctors try to help them with various methods, including a strange neon-light therapy, the soldiers remain in a half-awake state, often falling asleep mid-sentence or while eating. Apichatpong’s film follows suit, adopting a somnambulant mood as it takes the audience on a meditative journey through a medley of dreams, memories, and history.

Though Cemetery of Splendour doesn’t quite have a narrative so to speak, it does hinge on two relationships that take on an intimate dimension over the course of the film. Housewife and volunteer nurse Jenjira (Jenjira Pongpas) becomes particularly close with Itt (Banlop Lomnoi), a lone soldier with no relatives sleeping in the last bed in the hospital, with whom she makes a connection, calling him her “new son.” Jen also connects with Keng (Jarinpattra Rueangram), a medium so talented the FBI supposedly courted her; she uses her powers to help grieving families communicate with the comatose men. Burdened with a physical disability that forces her to walk with crutches (her right leg is shorter than the other), Jen nevertheless wanders around the hospital grounds searching for something. What exactly that is, Apichatpong never makes clear. Spiritual fulfillment? A stronger connection with her own memories? A deeper bond with her nation’s history, from its ancient kings still battling it out in the spirit realm to the present-day militia’s foot soldiers? “I think I’m dreaming,” she tells Keng channeling Itt’s spirit. “I just want to wake up.” Amidst the film’s enigmatic nature, Apichatpong firmly grounds Cemetery of Splendor in that very desire.

However, Apichatpong never telegraphs that kind of endgame, instead allowing it to blossom organically from his painterly filmmaking. His static camera lulls viewers into an oneiric state, allowing eyes and minds to wander but never once losing focus on the frame. DP Diego Garcia’s crisp, serene imagery make great use of Khon Kaen scenery, gaining depth with each successive shot, and editor Lee Chatametikool varies the relaxed rhythm just enough so that the immersive experience isn’t compromised by protracted long takes. It’s this approach that enables certain surprising moments to have maximum effect, like when two goddesses to whom Jen prays take on human form (Sjittraporn Wongsrikeaw and Bhattaratorn Skenraigul) to peacefully inform her that the soldiers will never recover because the kings’ spirits are using their energy to help them in battle. After 40 minutes of naturalism, this surreal scene has the effect of chilling the senses and throwing the entire film into a different register.

Despite a couple hallucinatory images—such as an amoeba squiggling across a cloudy sky like a slug crawling on an overhead projector—Cemetery of Splendour mostly lives and dies in small, personal moments that resonate more and more the longer Apichatpong fixes his camera on them. The two most powerful scenes in the film are when Jen awakens Itt by hand bathing him as he lies in bed and when Keng, imbued with Itt’s spirit, tenderly kisses Jen’s disfigured leg as she quietly sobs; both physical gestures—one mediated, the other not—stand out not just because of the filmmaking, but also because of Jenjira’s performance, which evokes a restrained, yet palpable resilience against the various forces that threaten to keep her asleep. Apichatpong embraces the sensuality of both moments, but he never quite tips it over into eroticism (when he refers to sex, it’s usually in a playfully jokey manner, as when Keng curiously pokes at Itt’s erection while he’s comatose, and when Jen tells Keng her body cream smells like “cum,”). They stand alone as deeply spiritual acts; one person healing another aided by ancient magical energy filtered through thousands of years of turmoil.

There’s a political dimension to Cemetery of Splendour, but instead of resorting to didactic pronouncements to communicate its beliefs toward the Thai government, Apichatpong instead couches them in metaphor. The film lends itself to a reading of how Thailand’s internal strife develops because its government is asleep at the post, like the soldiers lying comatose in their hospital beds. The cycles of political turbulence and violence continues because the paralyzed government remains unaware of the dangers of repeating history. The film’s most trenchant analogy for pointless, repetitive behavior lies just outside the hospital building: The government works on a secret construction project that amounts to little else but using cranes to endlessly dig dirt. Though not to discount the film’s real relationship with Thailand’s current political environment, Cemetery of Splendour is too multifaceted a film to force viewers to ascribe to a single interpretation. Moreover, its vivid imagery stands out stronger than any allegorical connection. The glowing neon tubes that recolor the hospital beds, the handholding skeleton statues that tower over Jen and Keng as they discuss Jen’s previous marriage, the absurd trailer for some junky genre exercise—these are the things that linger in the mind long after the film concludes. Or take the last shot of the film: a wide-eyed, unblinking Jen staring straight ahead at her surroundings, refusing to drift off to sleep any longer.