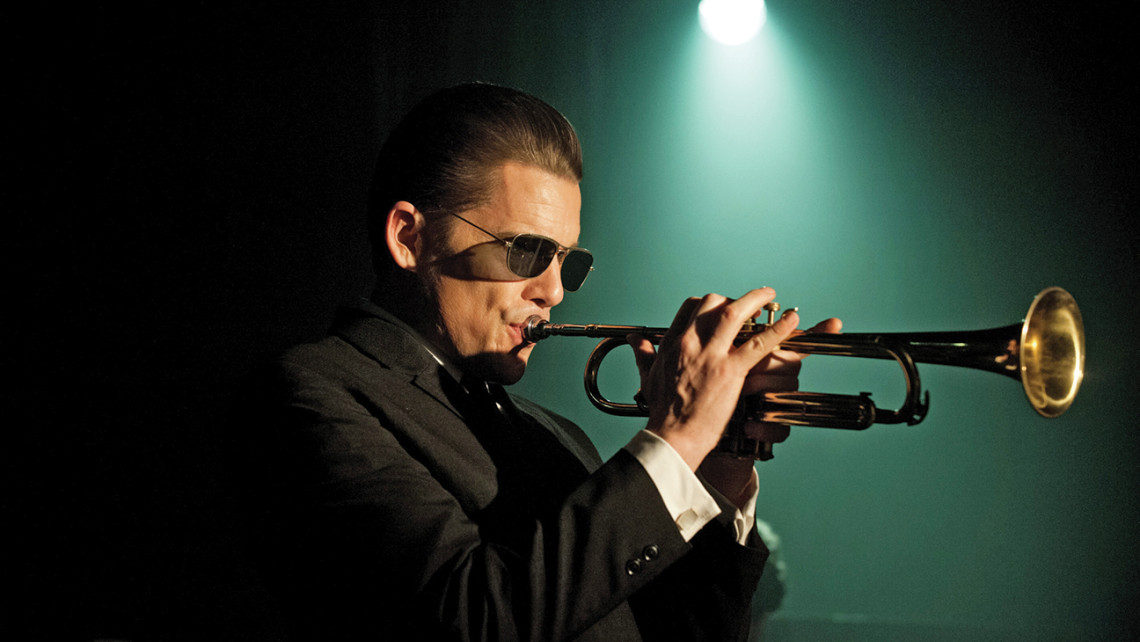 Now Playing: “Born to Be Blue”

In an interview for the Village Voice following the premiere of Born to Be Blue at last year’s Toronto International Film Festival, Ethan Hawke thoughtfully voiced one of the central tensions driving his portrayal of jazz trumpeter Chet Baker—the disingenuousness of venerating a white musician in a genre dominated by astounding black talent (both celebrated and forgotten). It was an ongoing concern with Baker’s career, the idea of a skinny farm boy from Oklahoma with a James Dean daydream look in his eye taking the jazz world by storm with the cool aplomb of West Coast swing:

“It’s a hard thing to address,” Hawke began, cautiously, “because it’s very complicated.” He thought for another moment. “There’s a great story that I tried to get into the movie, but it didn’t make it: When Chet won all these jazz polls, Chet told Miles Davis that he wanted to write to him and Dizzy and Cliff Brown and Louis Armstrong. He wanted to write them all letters and apologize, you know? And Miles Davis said, ‘Why would you stop there? I can think of 30 musicians that can play the trumpet better than you — and they’re all black.’ ”

It’s exactly that tension that director Robert Budreau dips into with surprising finesse, in turn upending several inherent problems with biopic narratives. The film dispenses with a chronological biography, instead framing a formative chunk of Baker’s life and career between two performances at the famed New York jazz club Birdland. A long-time heroin addict, the film charts Baker’s efforts to go clean following a harrowing assault in which all of his front teeth are knocked out, thus destroying his ability to play trumpet. Stubbornly refusing to quit, he reteaches himself how to form an embouchure (the pursed-lip blowing technique vital to play brass) around dentures, which turns out to be a gory and visceral effort, evoking something of a real-life Bleeding Gums Murphy. Outside this goal, Baker also repeatedly revisits the memory of his initial Birdland performance, in a series of black-and-white sequences that double as scenes from his own unfinished biopic production from the 1960s.

Outside these narrative ellipses, Born to Be Blue also exhibits some self-awareness of another less-talked-about biopic trope: the uncritical celebration of male genius. Deceptively soft-spoken (Hawke affects Baker’s characteristic whispery drawl, a bit of biopic-y mimicry that would derail a lesser actor), Chet is prone to mood swings, jealousy, and blustery pride when it comes to his musical abilities. Other (mostly male) characters in his periphery are content to chalk it up to a musician’s artistic temperament. The lynchpin of Born to Be Blue’s self-reflectivity is Carmen Ejogo (Selma) as Baker’s fiancée Elaine. An aspiring actress (she is introduced while playing Baker’s ex-wife Jane in the film-within-a-film biopic), Elaine initially acquiesces to her role as the jazz legend’s caretaker—joining him at his family’s farm (a jaunt that offers the requisite biographical details of Baker’s youth without resorting to flashback) and instating a zero-tolerance policy for drug use.

Thankfully, Budreau is smart enough to let Elaine’s own goals and desires to shine through her relationship with Baker. While her lover spits blood, Elaine tackles the casting couches of LA at a time when her ethnicity limited the availability of mainstream roles (a fortuitously timely subplot in the year of #OscarsSoWhite). Baker and Elaine’s side-by-side career trajectories threaten to fracture the couple’s bliss (her unwavering support of his work versus his dismissal of hers). But ultimately, it’s Baker’s worst behavior that undoes the bond—and reveals Elaine as the true hero of the story, brave enough to walk away from a co-dependant enabling relationship. That Born to Be Blue refuses to let Baker’s genius absolve his personal failings separates this biopic from the usual fawning hagiography.