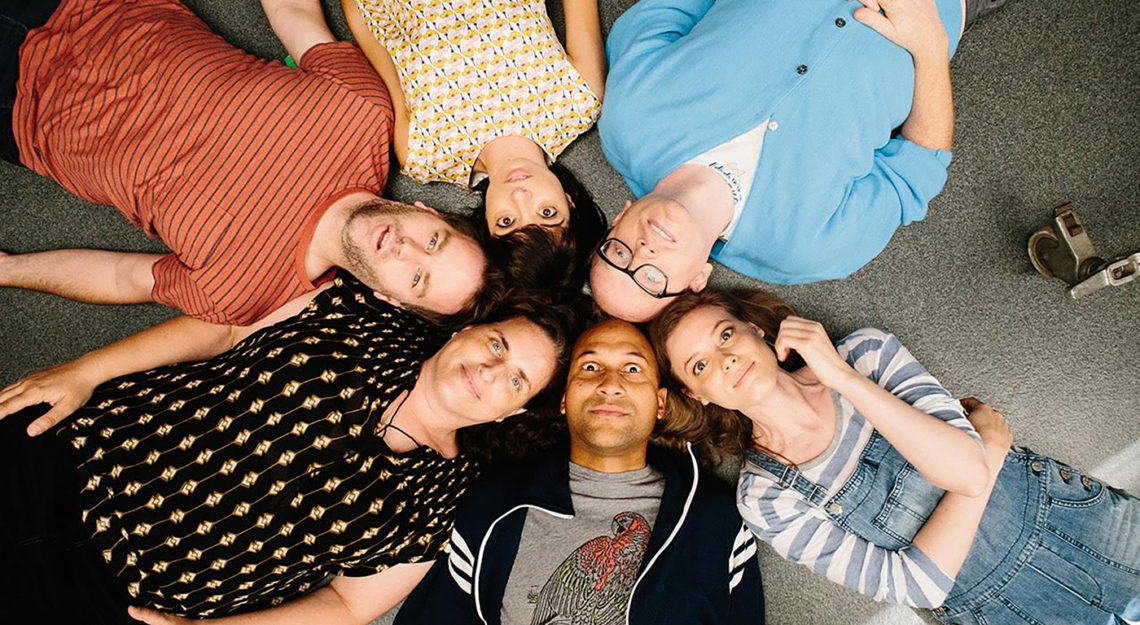 Though tight-knit groups may serve a common purpose, their dynamics largely concern the Unspoken, truths or observation that if uttered would drastically affect its balance. Mike Birbiglia’s compelling sophomore feature Don’t Think Twice, about a New York improv group on the brink of collapse, understands this idea very well. The group in question, The Commune, may have a peppy, one-for-all-and-all-for-one exterior, but underneath lies a well of fear about not making it and resentment towards those who do, which bubbles up to the surface as the door to any further opportunities begins to close. All it takes is a whirlwind of change to push its members—Miles (Birbiglia), the leader; Jack (Keegan-Michael Key), the breakout; Samantha (Gillian Jacobs), the die-hard in a relationship with Jack; Lindsay (Tami Sagher), the rich one; Allison (Kate Micucci), the artsy type; and Bill (Chris Gethard), the sad sack—to finally confront the existential dread in the pit of their stomachs.

The change that affects the group comes in the form of three pieces of news: Their theater is finally shutting down after years of unsatisfactory ticket sales; Bill’s father (Richard Kline) gets into a near-fatal motorcycle crash and sits in a hospital bed outside death’s door; and most of all, Jack and Samantha receive auditions for coveted Weekend Live (read: Saturday Night Live) spots. Since all of these events conveniently happen at once, it starts to throw The Commune into a spiral, as the dreams of comedy stardom that once bonded them together have now trapped them in stasis. While they work menial day jobs to support their marginal lifestyles, which amounts to living in dorm-like lofts and cramped apartments well into their 30s, they’re afraid the writing might finally be on the wall, and the only things that lie ahead are rejection and failure.

Story aside, Birbiglia absolutely nails the dangerous cocktail of self-delusion, self-superiority, and self-doubt that drives people to enter a career in the arts. The Commune is filled with adrift, insecure people who don’t quite fit into workaday society, but are larger-than-life superheroes when they’re on stage. None of them want to give up that feeling for anything, but their buoyant optimism has been replaced with clear-eyed uncertainty on the cusp of middle age. They’re still going to the same after-hours bar to vent their frustrations. They’re still watching Weekend Live every week even though none of them really like it, because it still represents the best opportunity for comic performers. They’re all still holding out hope something great might come along. “I don’t want my dad to die thinking I’m a failure,” Bill says at one point, but all of them are afraid they’re going to die actual failures. So what do they do? They crack jokes in the face of despair, such as impersonating Bill’s father’s brain-damaged voice, as it’s better to get a laugh than face their own irrelevance and mortality.

As for the members themselves, some are more sketched in than others, but all feel true to life. Though Micucci and Gethard perform well in their roles, their characters get the shortest shrift, even if Gethard makes the most of his small role as a grocery store employee afraid he’ll finally become a loser without The Commune. Sagher’s Lindsay fares a bit better as the one member with rich parents, which allows her to live at home without working a day job, something the rest of the group secretly holds against her. But it’s the other three members who get the most attention. Birbiglia shines as Miles, whose bitterness at being routinely passed over by the powers that be manifests itself in a nasty, condescending tone and a penchant for sleeping with his 22-year-old improv students. He’s someone way over the hill who doesn’t want to accept he doesn’t have what it takes for the Big Leagues, so he naturally takes his frustrations out on others and sneers at other people’s success. It’s only when an old crush (Maggie Kemper) comes back into his life that he starts to envision a life outside of comedy, one with more stability and less heartbreak, even if it means finally letting go.

Meanwhile, Key works in a different mode as the ambitious, showboating Jack, someone eager to jump to the next lily pad and who views improv as a means to a greater end. He can’t hide his ego from The Commune even before he starts throwing his weight around and hanging out with celebrities like Ben Stiller. But Birbiglia doesn’t paint him as a villainous figure, just a perceptive striver with grand aspirations. When the Weekend Live people show up at a Commune show, he takes it seriously and treats it like an audition, even if it means sacrificing the well-being of the team just so he can stand out. He watches his relationship with Sam deteriorate before his eyes as their interests diverge, he struggles at his new job where the Lorne Michaels-esque creator describes him as “not a pure talent,” and even when he tries to help out his friends, the distance between them is too vast to cover.

But it’s Jacobs’ Samantha who holds her ground as the film’s delirious heart, the person who loves improv for improv’s sake and doesn’t really have higher ambitions other than performing in small theaters for the rest of her life. Jacobs imbues her character with both a cult member’s devotion and a melancholic anguish as she watches her beloved group fall apart, but Samantha is the only one who actually turns her passion into a career. She refuses to cave into the group’s worst collective impulses and cling to a fading fantasy, instead turning to Del Close for inspiration to make the best of her situation. It’s a genuinely sweet performance, especially when Birbiglia provides a couple glimpses of her affecting the next generation of improvisers, embracing her role as a shepherd of comedy talent.

Though Birbiglia’s script admirably examines creative resentment and hostility, and how it can divide even the most charitable and pleasant amongst us, Don’t Think Twice is ultimately too reserved to honestly delve into such an acrimonious mental state. For a film ostensibly about how one person’s success leads his friends’ to face their own creative shortcomings, Don’t Think Twice plays way too nice, not allowing its characters to be anything less than pleasant people even when they’re lashing out or holding onto rage. (Miles comes closest to reaching that point as he frequently talks shit about his team behind their backs, or tries to use his fading glory to impress his students.) It generally makes sense for the characters’ antipathy and fear to be just bubbling under the surface, but Birbiglia places so many psychological landmines in the script that never go off with much force, it’s as if doing so would make these characters too unlikable for the audience.

When the inevitable fight finally occurs after a contrived mini-betrayal, it’s a long time coming, and yet it’s still too minor to make much of an impact, especially considering that Birbiglia shortly transitions into a misjudged final scene and a sappy epilogue that basically provides everyone with a happy ending of sorts. It’s such a frustrating development because Don’t Think Twice mostly stands as a wonderful depiction of the casual bitterness that foments after years in a creative profession, and how inertia can kill someone just as easily as self-destruction. The film’s numerous inspired character moments—Bill advising Jack on which of his characters to perform in the audition just after he found out his father is in the hospital; Miles angrily getting high while watching Jack on Weekend Live; Jack’s frustration with Sam when she decides to blow off her audition—feel ripped from Birbiglia’s personal experience, and provides much-needed specificity to its general milieu. Though Birbiglia isn’t a stylist and mostly conveys competency behind the camera, the film’s depressed vibe invades every frame, with a few key shots communicating public loneliness defter than any other film in recent memory. So many films about the arts focus on the struggle of making it, but Don’t Think Twice works within the struggle of letting go, of changing course instead of driving fruitlessly down an endless road. Birbiglia might not have depicted that road as smoother than it really is; that it’s even set there is an achievement.