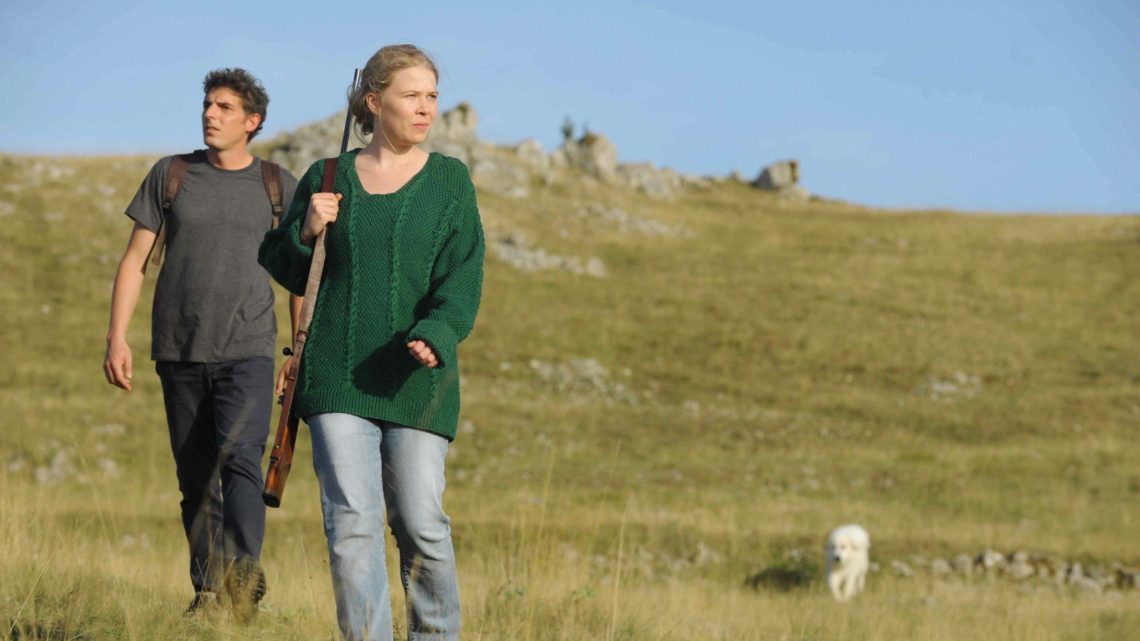 In our critic-at-large column, Vikram Murthi writes about the newest film from Alain Guiraudie, "Staying Vertical."

The key to Alain Guiraudie’s Staying Vertical is its controlled unpredictability, a grounded surreality that twists and turns the narrative without allowing it to fly completely out of orbit. Guiraudie’s erotic journey into the bizarre isn’t without substance, but its best quality derives from watching it casually move into unexpected territory without winking at the audience. Staying Vertical features a lengthy, graphic close-up shot of a birth, unexplained jungle psychological testing, and an assisted suicide/mercy fuck scored to droning prog rock, yet it never devolves into “Can you believe we’re doing this shit?” tonal territory. Guiraudie adopts the Kafkaesque straight face of presenting the unbelievable in completely believable terms, rendering it not only compelling but utterly potent as well.

Staying Vertical’s first half-hour sets up the film’s strange rhythms established by Guiraudie, editor Jean-Christophe Hym, and the main cast. We open on wayward screenwriter Léo (Damien Bonnard) driving along the countryside. In quick succession, he stops to flirt with a young man named Yoan (Basile Meilleurat), meets and charms a shepherdess and single mother Marie (India Hair), has sex with her, returns to Paris to get more money from his financier for a script he hasn’t even begun, gives an exorbitant amount of money to a homeless man, returns to the countryside, flirts with Yoan some more, returns to Marie and then quickly impregnates her. Hym measures out the pace so well that the film never feels rushed or unwieldy, but instead presents it as a logical progression of events, even though the literal retelling of it defies credulity.

Some of the credit belongs to Hym, but much of it goes to Guiraudie’s characterization of Léo as well as Bonnard’s performance. Within the first few minutes, both Guiraudie and Bonnard convey Léo’s restlessness, which amounts to a strong disregard for societal norms, evidenced by his sexual inclusivity, and a disinterest in social responsibility, or to put it in sitcom term, “settling down.” You get the immediate sense that he’s someone who evades his obligations to pursue his own interests, like Yoan, whom he aimlessly lusts after, even going so far as to engage with his grumpy, homophobic old housemate (Raphaël Thierry). But when Marie takes off with her two kids and leaves him with their newborn baby, his newfound obligation runs counter to his lifestyle, actively throwing himself and the film off-balance. When he becomes the baby’s primary caretaker, his world takes on a more ominous sheen, as he’s not the only one in danger any longer.

Though this somewhat conventional psychology is at the core of Staying Vertical, it never conforms to the obvious beats that it would otherwise demand. Guiraudie establishes a series of characters early on and keeps circling back to them without a prescribed endpoint. (Case in point: Léo’s financier makes a comical late-period appearance that’s contextually coherent but otherwise random.) Characters serve narrative functions but Guiraudie provides them their own orbit, only adding to the general surrealism when they crash and collide into Léo’s narrative. Everyone from Léo to Yoan’s housemate abides by their own unique set of principles, but the fluid, off-kilter world they inhabit often throws them into sharp relief.

With a film like this, the obvious question inevitably arises, “What’s the point?” Is this an exercise in prolonged fuckery designed to bug you out and leave you with nothing else? Though it’s possible that many will walk away believing that, the fact is that the fuckery itself is so damn entertaining, Staying Vertical presents too many substantive strands to ignore. Near the beginning of the film, Léo talks to Marie about his fascination and fear of wolves despite never seeing one. She tells him they’re nuisances who eat sheep and deserve bullets, but Léo still thinks they have a right to exist because “they’re living things.” You could easily extend Léo’s mixed stance on wolves to his own life, how he’s both afraid of and compelled towards a “normal” life, one that involves parenting and monogamy. While that might be slight on face, Guiraudie imbues it with urgency by feeding through his own brand of uncanny. By the very end of Staying Vertical, you’ll know the meaning of the title, but you won’t be any closer to more definitive answers about much else, which seems like a perfect place to leave a film obsessed with the ambiguous nooks and crannies of life.