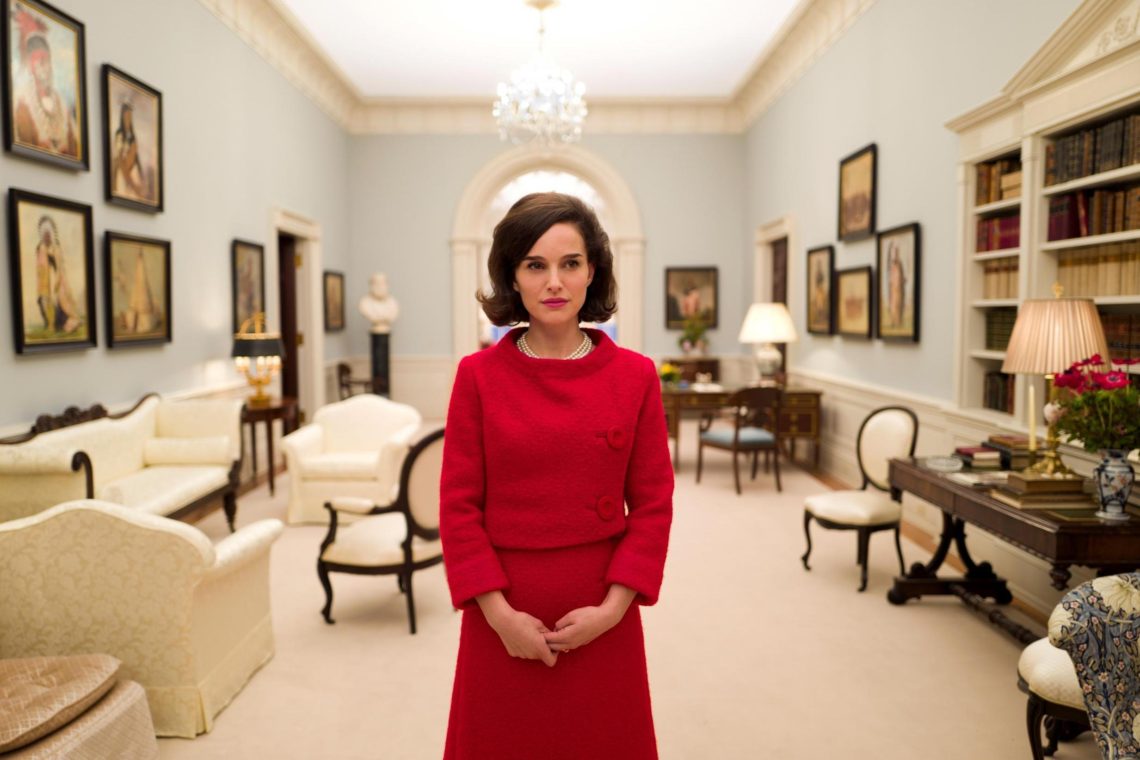 It’s telling that, in the days since my first viewing, the lasting impression of Pablo Larraín’s Jackie has been to remind me of another semi-recent biographical film, Experimenter (2015) in which Jackie co-star Peter Sarsgaard appears as renowned social psychologist Stanley Milgram. For my money, Experimenter is a marker by which modern biopics should aspire, foregrounded with a self-awareness of the inherent artificiality of depicting real-life events and people. By contrast, Larraín’s Jackie peddles this artificiality without guile, instead falling back on tired biopic tropes disguised by the sheen of a prestige art film.

Jackie covers the eponymous First Lady Mrs. Kennedy (Natalie Portman) immediately before, during, and after the infamous events of November 22nd, 1963 in Dallas, Texas. The assassination and its aftermath are framed by an extended interview between Jackie and a journalist (Billy Crudup), which, in turn, is framed by a recreation of the televised White House tour hosted by Jackie in 1962, which, in turn, is framed by a confessional conversation between the First Lady and the priest (John Hurt) who is to perform the private funeral ceremony for her husband. Larraín cycles through these various time frames with the sort of dreamy elliptical editing that can trick one into believing a film is more narratively inventive than it is in actuality.

Where Jackie falters is in the critique of its subject’s public persona versus her private life. In the wake of her husband’s death, Jackie reels at the prospect of preserving his legacy, planning grand funeral arrangements while privately grappling with her own feelings of inadequacy as a new single mother, and as a wife to an imperfect man with admirably lofty ideals. As she bristles against the dignified persona she so carefully crafted with projects like the White House tour, she also fears the loss of this protective shell. Or as Jackie puts it (referencing her husband’s favorite musical) “there can never be another Camelot.”

Unfortunately, Portman’s performance is the kind of boilerplate biopic mimicry that, while certainly attractive to Oscar voters, is the antithesis of the kind of critique she and Larraín are attempting–and the kind of critique successfully carried off by Experimenter. The Milgram film surrounds its understated performances with constant reminders of the unreality of biopic storytelling, underlining the fallacy of attempting to accurately convey the nuances of a true story onscreen. Jackie stumbles in this regard by taking the inverse approach, with an inauthentically attention-grabbing performance set amidst a fairly straightforward re-enactment of events. Perhaps Portman was always doomed, as donning the iconic pink Chanel suit and matching pillbox hat (and other accoutrements of Jackie’s respectable sixties style) always tended to come off as artificial, as these artefacts are so inextricably linked to images of the JFK assassination as to become vaguely unreal. The startling contrast between Kennedy’s real accent and Portman’s mimicry (affecting Jackie’s Mid-Atlantic accent, which is less Mrs. Kennedy than South Park’s Cartman by way of Miss Porter’s School) is foregrounded in the sequence recreating the 1962 White House tour. Portman performs an ersatz version of the tour, performing Jackie’s physical movements while lip-syncing along to the real Jackie’s voice. If the White House tour ventriloquist act is meant to foreground the artificiality of Jackie’s public persona, then Portman’s comportment of Jackie-isms even in private moments unfortunately undermines the effort.

“There are times when your life resembles a bad movie, but nothing prepares you for when your life actually becomes a bad movie,” Sarsgaard-as-Milgram muses at the end of Experimenter. If the real Jackie Kennedy was as concerned with legacy as is suggested by her onscreen counterpart, then I’m sure she would feel much the same.