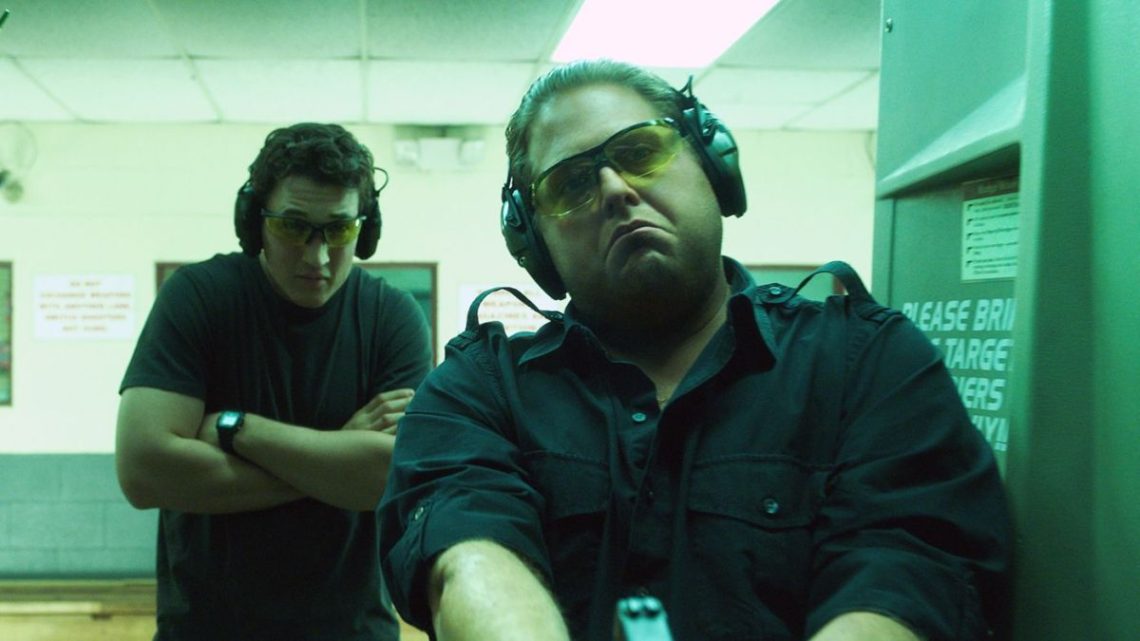 The subtitle of Guy Lawson’s book Arms and the Dudes reads “How Three Stoners from Miami Beach Became the Most Unlikely Gunrunners in History.” It’s a compelling enough hook and was largely the reason why Lawson published the initial Rolling Stone story in the first place, but the hook tells a very small part of a much larger, more fascinating tale. Arms and the Dudes primarily examines the Bush administration’s reliance on small private contractors to fund their dual wars in Iraq and Afghanistan and how their lack of strong oversight or regulation, coupled with plain old rank negligence, allowed for egregious widespread corruption to take place. This corruption directly led to lost lives and a weakened war effort, and it’s all because the U.S. government and the contractors they relied on viewed the physical and psychological effects of war as an abstraction.

Of course, Lawson uses the exploits of David Packouz, Efraim Diveroli, and Alex Podrizki—three “dudes” who became friends at an early age by ditching prayers at a Miami Beach yeshiva to go get high—as a lens into that world. They are the novel’s protagonists because they arguably represent the sexiest example of Bush’s small business initiatives, young entrepreneurs ambitious enough to acquire a $298 million contract to fund the Afghan War effort and deliver by any means necessary. However, they’re also the subjects because they came to be easy scapegoats for the government when the eventual full-scale investigation arose. The Dudes certainly cut corners, forged documents, and lied through their teeth to all types of authorities—especially Diveroli who Lawson portrays as a larger-than-life amoral sociopath—but they were ultimately participating in a system that actively incentivized and encouraged such behavior. The Pentagon allowed proxies to illegally procure weapons by circumventing domestic and international law. The Dudes’ actions were in full display of the government, who frankly didn’t care at all until it was legally necessary. They might have been stoner bros capable of understanding complex federal arms contracts, dealing with shady weapons dealers and diplomats, and negotiating deals with Army officials and defense ministers, but they were still middlemen through and through.

Todd Phillips’ latest film War Dogs, based on Lawson’s book, does not have any interest in the complexity of the real story. Phillips doesn’t care about the political and global implications of the Dudes’ actions, nor in the systemic neglect that allowed them to occur, nor even the wonky details about actual gunrunning. He just wants to make his GoodFellas (or The Wolf of Wall Street or The Big Short) and tell a story of two craaaazy kids who made it big by dipping their feet into the arms business and then flew too close to the sun. It’s a narrative that’s been told a dozen times by much more impressive filmmakers, but that doesn’t stop him from going through the motions, trying to suss out something new, or worse, something meaningful.

Miles Teller and Jonah Hill play Packouz and Diveroli respectively (Phillips removed Podrizki from the story), as prototypical bros from the Old School or The Hangover model. Packouz is a masseuse who wants something more from life, and luckily, he meets Diveroli, who’s back in Miami Beach and tells him about his gunrunning exploits. Soon, Packouz’s girlfriend (Ana de Armas, in an utterly thankless role as the moral scold) becomes pregnant, he joins Diveroli’s company, AEY, and they start bidding together on federal contracts on a public government website. It’s high-flying adventure for a while with them making money hand over foot and performing dangerous missions such as driving through Iraq to bring weapons to the Green Zone (an event that never actually occurred, by the way). But then, of course, the two acquire the Afghan contract and everything goes south. Required to supply 100 million rounds of AK-47 ammunition to the Afghan army, they find an Albanian supplier that has the ammo, but unfortunately it’s been manufactured in China, which means it cannot be sold under American law. But that doesn’t stop the bros! So they try to defraud the Afghans and the U.S. government, and they would’ve gotten away with it too if it weren’t for their pesky hubris! 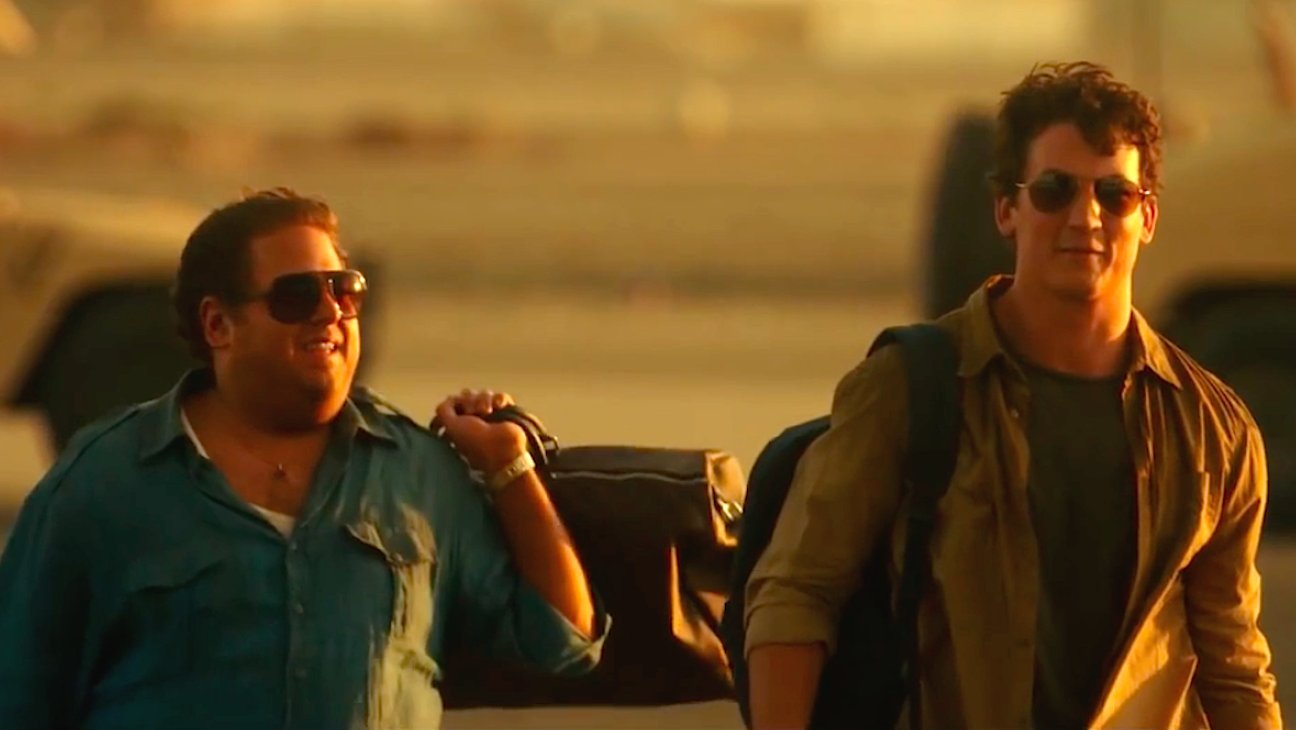 It’s all very inorganic and forced, mostly because Phillips’ interest in the story remains entirely on the surface. While it’s understandable that he and co-writers Stephen Chin and Jason Smilovic might not find the nuances of federal arms contracts compelling enough for the big screen, the choice to reduce and simplify the entire story into a buddy comedy is both and deeply disappointing. As a result, the narrative beats are all telegraphed from a mile away, almost all of emotional content is strained and irrelevant, and of course, it’s as apolitical as possible to reach the widest possible audience. War Dogs is a film that features Jonah Hill excitedly saying, “I fuckin’ hate Bush!” that could still reasonably appeal to neo-cons.

While War Dogs surely represents missed potential from a creative standpoint, it’s mainly just a mediocre bore on screen, never terrible enough to be so-bad-it’s-good captivating or okay enough to mildly recommend. Teller is bland but competent as Packouz, despite his utter lack of chemistry with Hill, and succeeds in gaining the audience’s sympathy as the “sane” gunrunner. Hill, on the other hand, excels at playing Diveroli-esque characters, i.e. boorish, narcissistic monsters driven by base desires and venal interests. He’s a commanding presence as the Ugly American Asshole From Hell, complete with a foolish teenager’s bravery and a distinct bro cackle, a characteristic sure to be the film’s highlight. Hill is the primary reason to see War Dogs, but even at his best, it’s simply a lesser variation on the masterful Donnie Azoff character in Wolf of Wall Street.

But I keep returning to Phillips, mostly because of how wrong he is for the material. In its ideal form, War Dogs could have been a crackerjack political procedural that functions as a microcosm for global corruption in the War on Terror, but it would require a director not to get sucked into the hook and focus on the bigger picture. As it stands, Phillips took the hook and a series of anecdotes from Lawson’s book—the Chinese ammunition, the Albanian gangsters, the shady Swiss arms dealer (played by an utterly disinterested Bradley Cooper), etc.—and placed them within a familiar narrative. It’s even telling which details he chooses to focus on, like Packouz’s supposedly pathetic masseuse career (in real life, he was saving up to record a rock album) or Diveroli’s uncultured bravado, instead of the minor touches that could have livened up the material, like how Diveroli and Packouz were adept at reading contracts because of their experience studying the Talmud growing up.

There’s one scene in particular that encapsulates War Dogs’ lack of ambition: Halfway through the film, Diveroli pumps up a handful of new AEY recruits by explaining how much money they’ll soon be making when they come on board. But when one of them has the gall to ask Diveroli what AEY actually stands for, Diveroli quickly explodes and kicks him out of his office, telling him that it doesn’t stand for anything as he hurriedly leaves. In reality, AEY does stand for something, the first initials of the three siblings in Diveroli’s family. But Phillips would rather sacrifice even the most minor truth for an opportunity to give his subjects a crowd-pleasing scene, which rest assured, it is. It’s not that Phillips liking Packouz and Diveroli is the problem (Lawson likes them too, but his interest takes on a more distanced fascination), it’s that he isn’t willing to portray them as the middlemen they really are. Instead, they’re fucking heroes. Watch the manically edited montages of them making deals while railing blow or all the “awesome” slow-mo scenes soundtracked to on-the-nose classic rock and try to argue otherwise.

Near the end of Arms and the Dudes, Lawson quotes Dietrich Dörner’s The Logic of Failure: “Failure does not strike like a bolt from the blue; it develops gradually according to its own logic. When we watch individuals attempt to solve problems, we will see that complicated situations seem to elicit habits of thought that set failure in motion from the beginning.” To his credit, Phillips takes this idea to heart, but he never grasps its true implications. Packouz and Diveroli were doomed from the start, but so was the U.S. government when they tried to indirectly fight their battles by outsourcing the dirty work. By the end of War Dogs, both dudes are losers, but they’re still winners in Phillips’ eyes, and that’s ultimately the insurmountable problem.