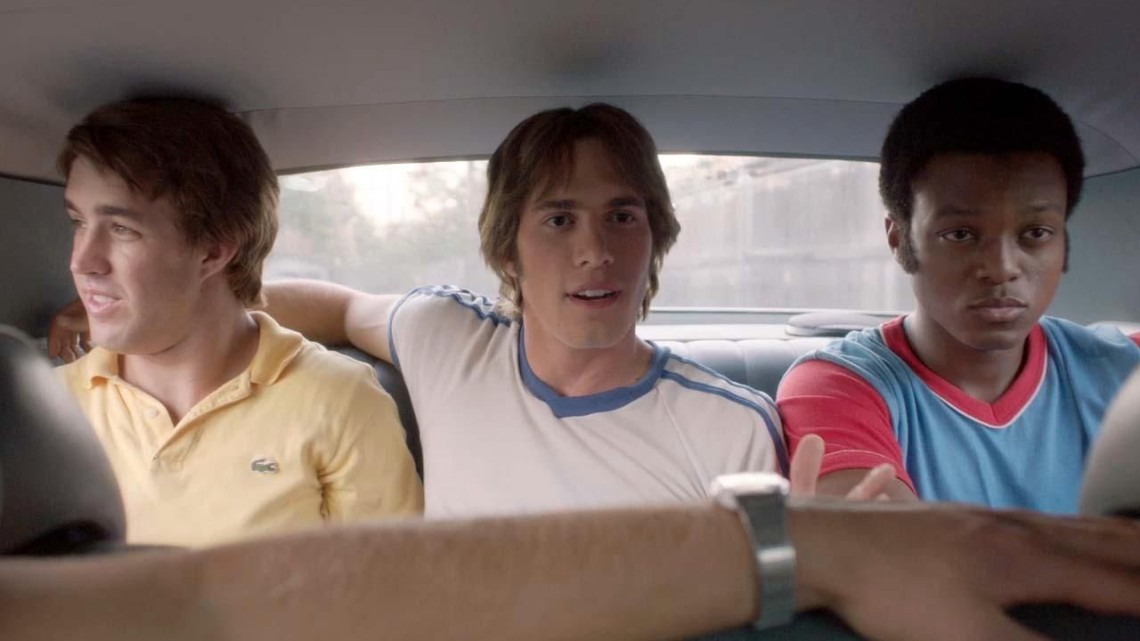 Now Playing: “Everybody Wants Some!!”

Forever the curious traveler and earnest purveyor of bong-hit philosophy, Richard Linklater may have never mentally left college. Though he never obtained a degree from an institution of higher learning, Linklater is one of the few contemporary directors who best embody the inquisitive, open-minded mentality of the ideal college student. Few exceptions aside, his films feature a tender sincerity, as if Linklater retained the unhardened perspective of an eager freshman; they indulge in thoughtful, digressive conversations, lap up the poetry of the mundane, and most importantly, never condescend to the immediacy of clichéd emotions, especially coming from the mouths of soulful searchers. If there’s any claim to universality in Linklater’s work, it doesn’t exist in the lived experiences of his subjects, but instead in their abstracted milieu. The waiting-for-something-to-happen brand of teenage boredom in Dazed and Confused; the Before trilogy’s genuine belief in unexpected, adventurous love; and in his latest film Everybody Wants Some!!, the utopian notion of adaptation within an inherently flexible environment.

Set in 1980 in the four days leading up to the first day of class, Everybody Wants Some!! follows a group of college baseball players as they drink, disco, proselytize the Facts of Life, flirt with and bed women, and most of all, constantly compete and fuck with each other. Freshman pitcher Jake Bradford (Blake Jenner) serves as our point-of-entry character (describing him as a protagonist doesn’t feel right), a Linklater stand-in to help ease us into the aggro-masculine world of college athletics. Ingrained with the confidence and swagger that comes with being a popular athlete most of his life, Jake preaches good-natured sweetness over one-upmanship, immediately setting him apart from most of his teammates’ arrogant personalities, and steals his way into audience sympathies, if only by default. He feels comfortable in any and all social situations. He gives the theater girl (Zoey Deutch) he crushes on flowers and a note instead of the well-worn pickup line. He even has a sweet record collection.

Though Jenner’s down-to-Earth presence and delivery make Jake a compelling character all on his own, he functions as a necessary evil, the driver on our anthropological tour of this specific world. We’re not exactly following Jake, but examining the group dynamics of The Team, a platoon of individual personalities forced to work as a unit on the field so frequently that they’re bound to clash almost anywhere else. From the film’s first minutes, Linklater doles out little bits of information regarding the various dynamics at play, circling back to the ones that are important and throwing in the rest as seasoning. Seniors are distrustful of anyone younger than them for fear of being replaced. There’s a general anti-pitcher bias that runs amongst the hitters and fielders, with leftie pitchers being the de facto weirdest demographic. The pro prospects are generally the biggest assholes, with one, the over-the-top parody of jock douchebaggery Jay Niles (Juston Street), outshining the other, the self-serious but talented Glen McReynolds (Tyler Hoechlin), in spades. Everything from foosball to smoking weed is an obligatory competition, to the point where it’s mildly surprising that Linklater didn’t include a scene where the guys whip out and measure their dicks.

But in typical Linklater fashion, the large ensemble never remains one-dimensional stereotypes for long, eventually taking on shaded, nuanced personalities thanks to specific writing and sharp performances. My favorites, in ascending order: Nesbit (Austin Amelio), the offbeat livewire (leftie pitcher), poor gambler, and self-described “knuckles” champion; Brumley (Tanner Kalina), the virginal freshman, susceptible to peer pressure, perpetually slow on the uptake, and overly familiar in a desperate attempt to be liked; Plummer (Temple Baker), another freshman who frequently spouts unknowingly witty asides with an all-too-familiar beer-soaked delivery, double-fists when he drinks, and supplies the most reasonable statement in the film: “Cats don’t belong in fridges”; Finn (Glen Powell), the smooth-talking amateur philosopher of women and baseball, who reads Kerouac and smokes a pipe, charming as shit, and all but guaranteed to be the audience MVP; and finally Willoughby (Wyatt Russell), the stoner pitcher who’s a perfect cross between Slater (Rory Cochrane) and Wooderson (Matthew McConaughey) from Dazed and Confused, who performs Tai Chi in the nude, has every Twilight Zone episode on videotape, listens to Pink Floyd’s “Fearless” while ripping bongs, hides a drifter past, and preaches gentle wisdom about finding the tangents within the framework. Linklater’s storied familiarity with his actors pays dividends here; each of these characters expresses their personalities often in one line of dialogue or moment of action. He makes sure that by the end of the film you know these guys, even if you don’t have any fill-in-the-blank, real-life referent for them. 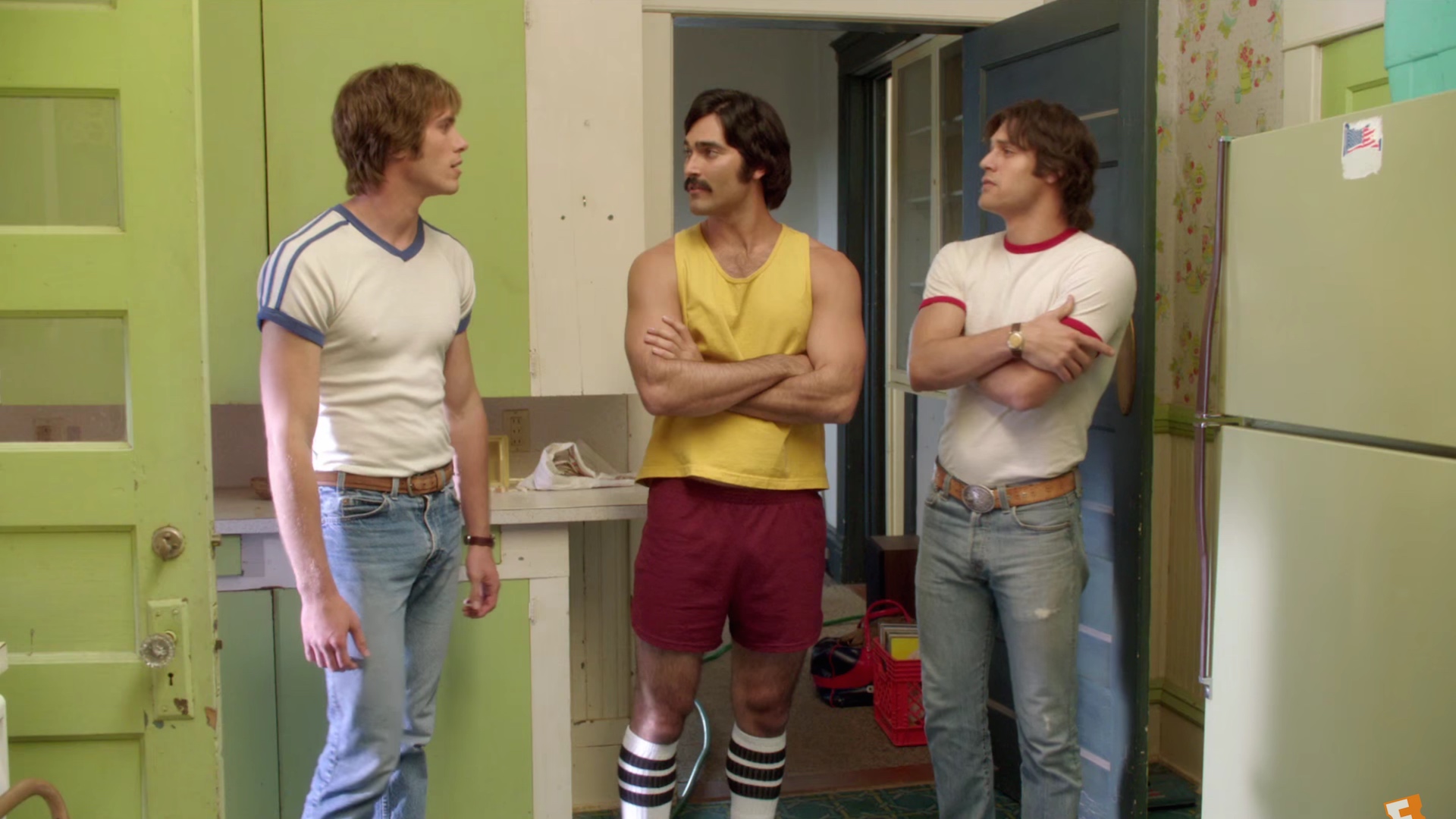 To state the obvious, Everybody Wants Some!! is a “dude movie,” simply because it’s explicitly about, and remarkably perceptive of, heterosexual male group dynamics. Whether or not you hold this against the film depends on your tolerance for such a premise, but the lack of an active female perspective aside from Jake’s love interest Beverly (though she functions primarily as the heady performing arts counterpart to Jake’s physical identity) doesn’t inherently lend the film a discriminatory attitude. While there’s plenty of preening and requisite guy talk about getting pussy, it often takes a backseat to the nuances of straight male interaction, especially for a movie ostensibly about a bunch of athletes trying to get laid. Linklater sets his sights on the various phases of male friendship, specifically ones predicated on circumstance. There’s initial distrust or outright disdain, followed by gradual-but-tempered acceptance based on similar skills or outlooks, finally concluding with some leveling of the proverbial playing field. The near-constant fuck-withery throws every conversation into a guessing game of sincere or sarcastic. The genuine moments of connection are often bookended by evasive trash talk or binge drinking. Linklater doesn’t pretend that it’s revelatory to point out these behavioral modes, but he nevertheless depicts them honestly and fairly, sans the compulsory eye-roll that many other directors would have needlessly provided, a momentous feat in and of itself.

Billed as a “spiritual sequel to Dazed and Confused,” Everybody Wants Some!! shares some obvious DNA with Linklater’s 1993 anti-nostalgia masterpiece, but it’s more of a thematic companion piece than anything else. Though Dazed and Confused’s hangout vibe and killer soundtrack lends itself to endless re-watches and quotability, its melancholic tone sharply permeates the party surface; the air of impermanence hangs just as strong as the pot smoke, as if the good times are already in the rearview mirror for many of the characters. Moreover, Dazed and Confused’s ethnographical substance had much to do with Linklater’s panoramic floating-eyeball approach to high school, and specifically how the fluidity of space doesn’t negate the cruelty of a fixed pecking order; Mike (Adam Goldberg) and Tony (Anthony Rapp) may be allowed to attend the Moontower party, but they’re still going to be treated, and beaten up, like the nerds that they are.

If Dazed and Confused was about the muted pain of being trapped in an unforgiving ecosystem that forces innocents into prescribed roles so they can perpetuate hierarchical rituals, then Everybody Wants Some!! is about the innate freedom in escaping that space. Linklater presents college life as a shiny, permissive environment that facilitates identity hopping amongst a range of equal subcultures. Linklater posits that though a person arrives to college in a box—baseball player, actor, punker, etc.—that box is porous and transparent, and one is encouraged to break free of its modest confines. While at a punk club, Jake asks Finn if they’re phonies—jocks who put on various masks to fit in so they can meet women—to which he replies, in effect, that it’s not phony to be adaptive, and while that’s just one line of many from a character filled with them, you can sense that Linklater believes it. Just because these guys are playacting and subsequently engaging with a coterie of different experiences to get laid doesn’t negate the actual experiences had or the curiosity they brought to it. They still danced at a disco, moshed at a punk club, mingled at a theater party, etc. You may go where they are, but you still only bring yourself.

“Here for a good time not a long time, right, fellas?” says Willoughby as he packs up his stuff and exits the baseball field for the last time, expressing a sentiment that runs through the film without much fanfare. There’s a sense of “we’re gonna live forever!” from these guys’ actions, but of course, we know they won’t. Most of them will eventually have to find an identity beyond “baseball player” and engage with a new set of Sisyphean struggles in the real world, a place filled with different, more sturdier boxes that are even more difficult to escape. Linklater never assumes his subjects are naïve about this fact; instead, they’re committed to having a good time living in the now, grasping at the cosmic meaning of existence that lies just outside their grasp. They paw at it with discussions of determinism, clumsy late-night musings about the beauty of having a passion, glances at prescient chalkboard scribbles from an egghead teacher saying, “Frontiers are where you find them,” but they never quite hold onto them, nodding off into sleep or face first into another beer before it really settles in. That’s okay, Linklater claims, there’ll be plenty of time, if not at college, than for the rest of their lives, to keep searching and grasping at that ever-elusive meaning. But for now, as the song says, let the good times roll.