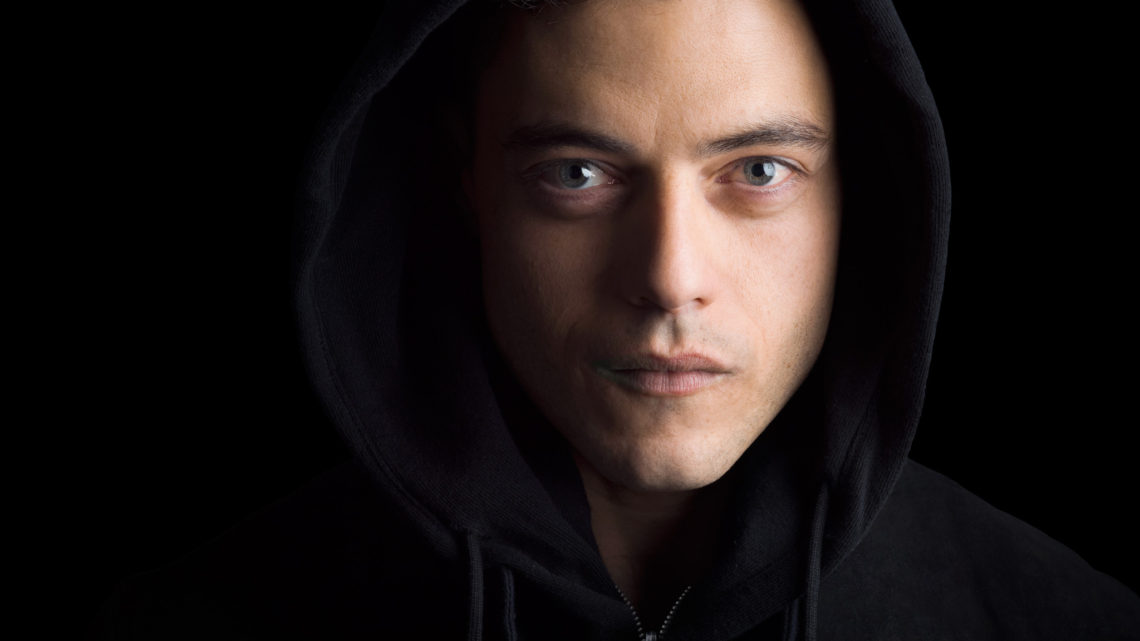 How to Save the World: On “Mr. Robot” and David Fincher

A lonely man of questionable sanity talks in monotone, directly addressing the audience as an unwilling participant in his misery. A second man, whose recklessness is tempered only by his aggressive charisma, appears. The second man has grandiose plans of killing capitalism and resetting society to some utopian pre-credit standard. By the time this plan actually, miraculously happens, the lonely man realizes that his companion is a manifestation of his psychosis. A Pixies song plays, and the credits roll.

In the years since its 1999 release, Fight Club has been praised, picked apart, and bro-ified; its rules have been plastered on dorm-room posters even as its hypermasculinity has been vilified by countless critics. Yet in a Palahniuk-ian twist, the richest and most thought-provoking commentary on the film and the filmography of its director David Fincher arrived nearly two decades later in the form of a television series. 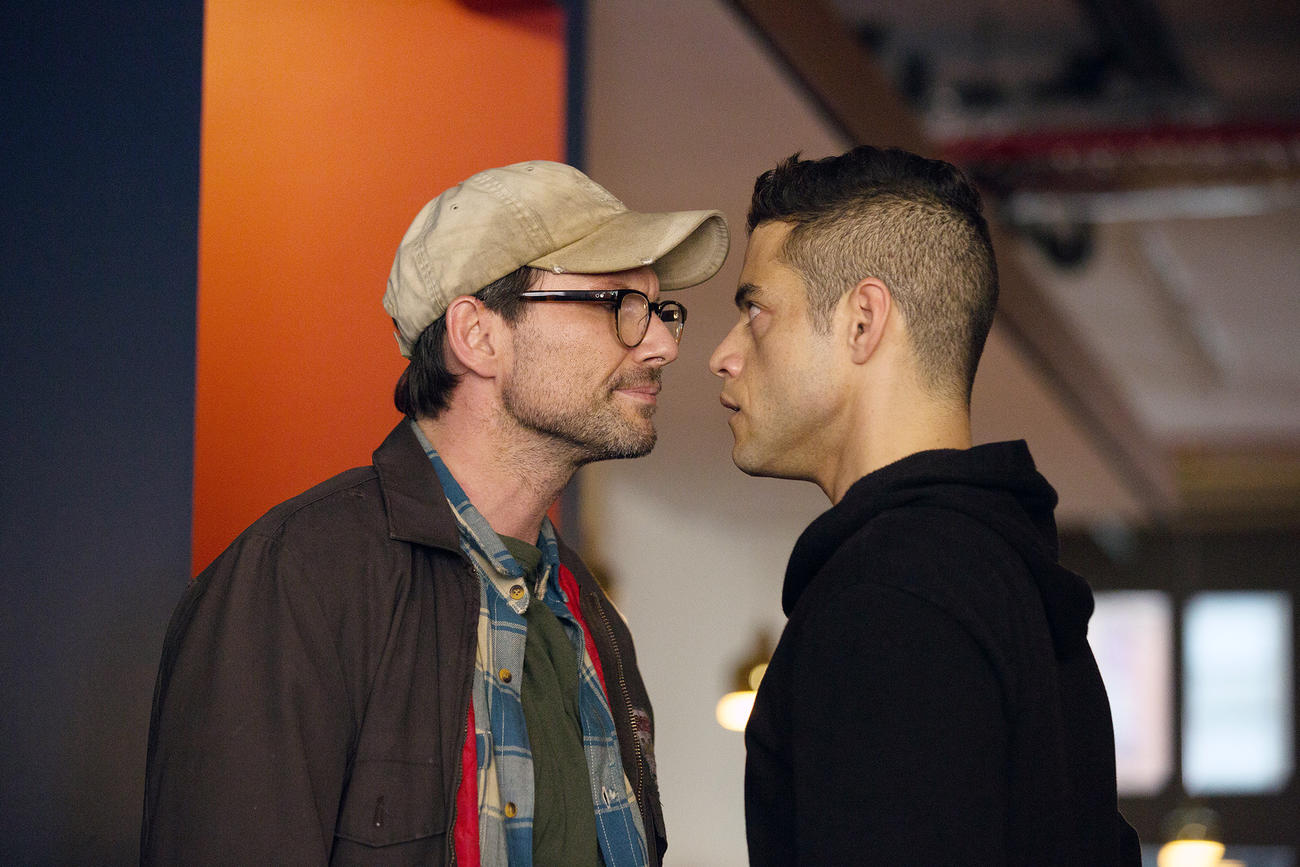 Mr. Robot is a taut psycho-cyber thriller, a masterful piece of cinematic television whose first season plot skeleton mirrors the outline of Fight Club mentioned above. On the page, the USA show’s freshman season seems to borrow too heavily from Fight Club, but on screen it quickly outgrows its most obvious inspiration even as it pays homage. Mr. Robot includes several seemingly subconscious nods to Fincher’s entire filmography, including a rooftop murder that visually mimics the climax of Gone Girl, and an electronic score reminiscent of Trent Reznor and Atticus Ross’ phenomenal soundtrack to The Social Network. Creator Sam Esmail has imagined a five-season arc that, when not functioning as an outright televised ode to David Fincher, still directly tackles the dark themes and psychological recesses that seem to preoccupy the filmmaker. In perhaps the showrunner’s equivalent of Fincher’s much-discussed preference for dozens of takes, Esmail has even foregone television norms to take directorial control of every second season-episode (the first of which premieres tonight).

The pilot of Mr. Robot shares more DNA with the 1997 conspiracy thriller The Game than with any other Fincher work. In The Game, a wealthy man played by Michael Douglas becomes convinced that a high-powered company called Consumer Recreation Services intends to rob and murder him, when it’s actually orchestrating the entire conspiracy as part of a very expensive, stressful, and vaguely life-affirming birthday gift. Although Mr. Robot hasn’t had that explicit “gotcha!” moment yet, its reality is no less fractured. In the pilot, viewers meet antisocial hacker Elliot Alderson (Rami Malek), who works for an internet security company protecting a conglomerate that he’s mentally renamed Evil Corp. Elliot addresses viewers as an imaginary friend and thinks men in black are following him. He is required to attend therapy, but to date, no reason for the requirement has been given. Plus, a homeless man he meets turns out to be the head of an Anonymous-like entity called fsociety that’s hellbent on taking down capitalism. Christian Slater plays the titular Mr. Robot, the unhinged Tyler Durden to Elliot’s unsuspecting narrator. Though it takes Elliot months to pinpoint Mr. Robot’s psychological origin and recognize him as a delusion, Esmail makes his spontaneous appearances random enough to raise suspicion among viewers far sooner. Within and beyond the pilot, Esmail never reassures viewers of Elliot’s objective reality, instead manufacturing these reminders of potential unreality at every opportunity.

For both viewing experiences, the central character and audience must constantly reassess their own understanding of the show’s reality. Along the way, viewers must make a conscious decision to either gain control over the viewing experience by attempting to unravel the plot at hand (the internet is teeming with much-debated Mr. Robot fan theories), or to embrace the unreality by leaning into the manic energy and seeing where it leads. By the end of season one, when a post-credit sequence reveals a group of unbothered CEOs lounging idly at a mansion party after learning that the global credit system is frozen, it’s understood that regardless of what is real, Fincher’s idea of life as a game for the wealthy still rings true.

Class commentary is not the only trait Fincher’s and Esmail’s work shares. Both create worlds in which extreme misogyny, violence, and manipulation are the norm for women, but while Fincher’s films have been critically polarizing in their portrayals of gender politics, the women of Mr. Robot have been largely celebrated. The difference may be that, by placing most of the action directly in the corporate sphere, Esmail allows these women more subtle forms of maneuvering, making many of the nuances and power plays more akin to those of Mad Men than a Fincher film. Differences aside, the toxic and threatening male attitudes that drive the characters of films like The Girl with the Dragon Tattoo are still present in Esmail’s work. Elliott’s coworker and childhood best friend Angela (Portia Doubleday) endures the most consistent, shocking disrespect, soldiering on wearily but with resilience. After swiftly losing a work account due to a random act of sexism, she faces down an executive who makes lewd comments toward her as she tries to discuss his role in her mother’s death, as well as a CEO who coldly requests she buy a clean pair of shoes after she witnesses a bloody on-air suicide. With four seasons of corporate backstabbing and general anarchy still to come, the transformation of Angela into a Lisbeth Salander or Amy Dunne-type–fed up and cunningly fighting back against an uber-patriarchal world–seems inevitable.

Like Lisbeth and other female characters Fincher has brought to life, the women in Mr. Robot also consistently refuse to be saved. In the case of enigmatic and conniving Joanna Wellick (Stephanie Corneliussen), an executive’s pregnant wife who forces herself into labor to derail a police investigation against her husband, they’re even capable of going to great lengths to save the reckless men in their lives. Despite writing a relatively capable cast of female characters, Esmail has Elliot spend most of his non-hacking time in the first season attempting to connect with society largely through misguided, female-driven rescue attempts. Elliot’s initiation to fsociety, the catalyst for the entire show, is a result of his spur-of-the-moment decision to frame the executive who belittled Angela. Later that night, he secretly makes his psychiatrist’s dishonest boyfriend break up with her, assuming her sadness will thicken her skin against future phonies. On a personal level, Elliot is an ineffectual, but more likeably earnest, crusader acting off his misinterpretation of female needs, on par with Nick Dunne or Fight Club’s narrator. 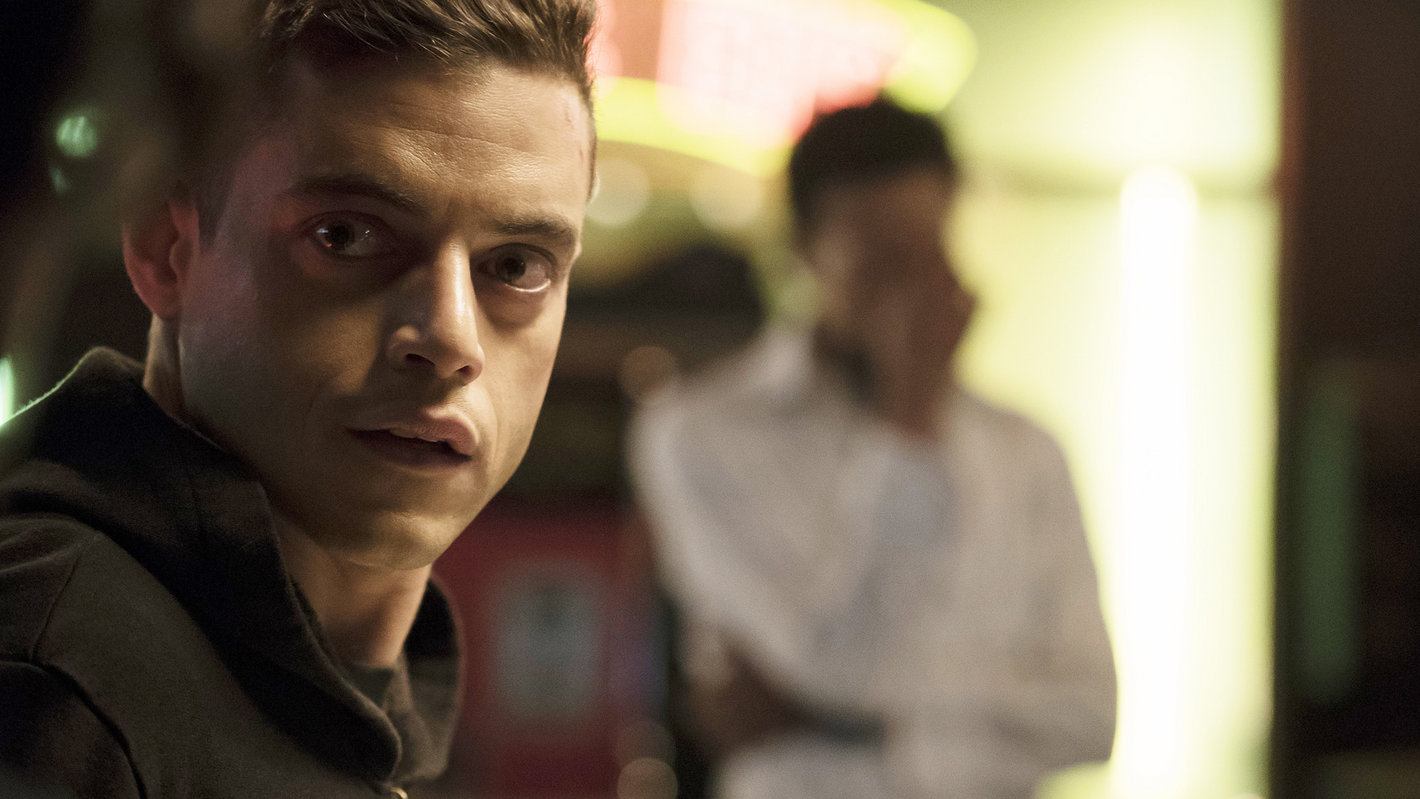 The most heartbreaking of Elliot’s rescue attempts, which also made for one of the best single episodes of television in recent history, came when Elliot’s drug-dealing girlfriend, Shayla (Frankie Shaw), was kidnapped by the crew of her abusive supplier, Vera (Elliot Villar). The supplier gives Elliot one day to complete a nearly impossible task–hacking into a prison network to free him–in order to get Shayla back. As night falls, viewers see Elliot, all frayed nerves in a black hoodie, stare out at the prison yard where he’s managed to hack open every cell door. Vera returns just long enough to throw Elliot the keys to the car that he and the henchmen had arrived in and say, “I told you you’d get her back, bro. You just didn’t realize she was with you the whole time.”

The camera holds on Rami Malek, his face undergoing an almost imperceptible shift toward desperation, as he opens the trunk. Episode director Deborah Chow makes the painful but necessary decision to spend 80 full seconds documenting Elliot’s grief, all while a spare, ominous beat mingles with the sound of prison sirens offscreen, before letting the camera rest on Shayla’s lifeless body. For most viewers, it takes this long to realize that this is Esmail’s Seven, his “What’s in the box?” moment, pulled off just as seamlessly and with an equal element of sick surprise. Where Brad Pitt was all vocal denial, Malek’s performance shows an internal fragmentation that is almost more powerful. No scream ever comes, and no words are spoken. Elliot is alone, without the benefit of a Somerset character to act as his conscience or even a John Doe to kill. Where Seven withheld the image of the box’s contents, Mr. Robot shows a body but refuses catharsis, ending the episode with a wail of sirens and a crushing sense of dread that endures through the season finale.

At their often caustic cores, Fincher’s films are obsessed with questions of identity. Who is Amy Dunne, or for that matter, Mark Zuckerberg? What do they want, and what are they capable of doing to get it? The answers are jarring and twisted, but with Fincher and Esmail’s twin technical styles–both have a penchant for cool colors, sleek cinematography, and dialogue that lands like a punch in the gut–the questions are just as important. For Elliot, the question is a clear refrain, its variations spoken several times: “How can I save the world?” Perhaps this question is the area in which Mr. Robot will soon outpace Fincher. After all, while a film facilitates finality through the end credits, television dwells in fleshing out the long-term story. At the start of season two, Esmail is essentially imagining the day after Marla and Tyler hold hands while watching skyscrapers explode in Fight Club. Rather than settling for a version of David Fincher’s larger-than-life ideas made for the small screen, Mr. Robot has proven itself capable of supporting those same big ideas with realistic, continuous repercussions. This is just its first act.