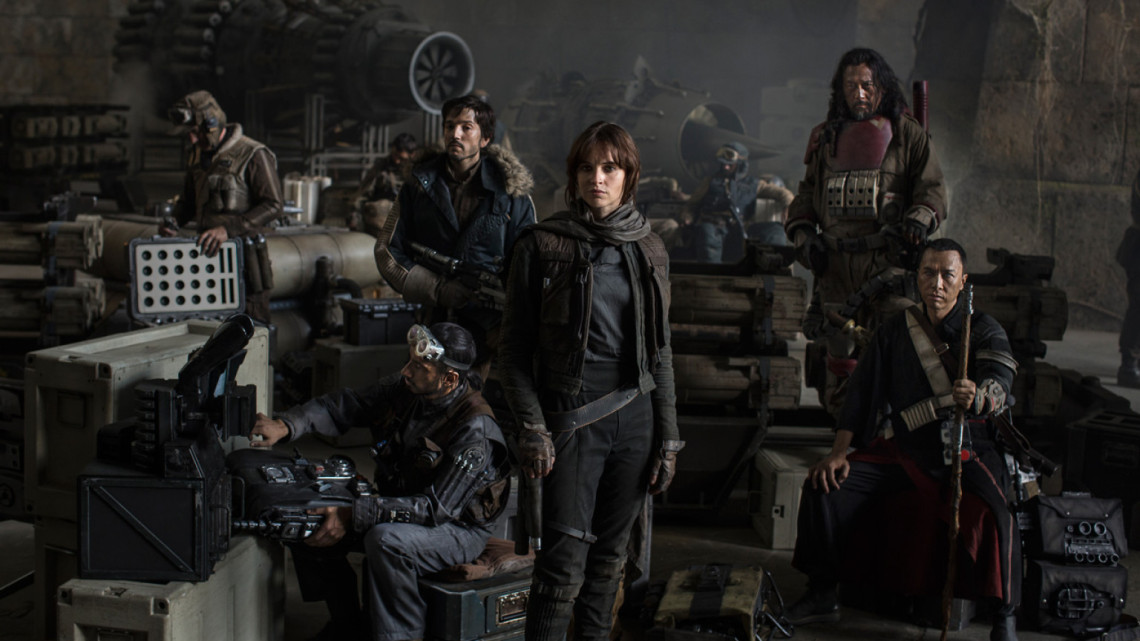 A Modest Proposal Regarding Blockbusters

Imagine an alternate future: You’re at the theater to see a new space-action film directed by up-and-comer Gareth Edwards. Rogue One is the title, but you have no idea it’s related to a movie franchise. In fact, you hadn’t heard of the film until a month ago, when a handful of publicity photos were released, and you’re going in mostly blind, only knowing of its great cast. You sit in the third row, avoiding the tall guy near the end of the aisle, and hope your neighbors won’t text during the movie (those types are likely at the AMC showing anyway). The title credits hit the screen, but beneath “Rogue One” sits a subtitle you could have sworn wasn’t in the trailer… How did you miss it? But there it is: “A Star Wars Story.”

By now, most everyone has heard of (and perhaps forgotten) the release of 10 Cloverfield Lane, JJ Abrams’s super-secret quasi-sequel to 2008’s Cloverfield, with the newest installment directed by Dan Trachtenberg. Through winding origins, Valencia (the film’s working title) went through several rewrites as it began to get refurbished into the Cloverfield universe, although the marketing lid remained in tact until the first trailer arrived in theaters in January. Even then, the film’s connection to Cloverfield was left unexplained. The film has now grossed nearly $95 million worldwide against an estimated $15 million budget. This was a success by virtually all reasonable standards, outgrossing 5 of the 8 Best Picture nominees from last year, even with its release set in the March drop zone before the “real” summer movies get underway.

Rogue One and 10 Cloverfield Lane are two largely disconnected movies, yet I began to see an opportunity for an innovative release schedule upon seeing the Rogue One trailer. Unlike Jonathan Swift’s shocking, satirical A Modest Proposal from 1729, mine does not recommend the idea of eating babies (unless we’re talking about a secret release set in the Snowpiercer universe). However, my proposal is perhaps similarly far-fetched, the pipe dream of a cinephile exhausted by years of pre-release “buzz” and “rumors.”

I suggest that more studios could benefit in taking the same route of secret release: specifically those with enormous properties—the tentpoles and franchise installments—which have become effortlessly ubiquitous in online movie journalism. After the release of 10 Cloverfield Lane, there were plenty of essays explaining how a secret release was possible in this case, the so-called “Beyonce” approach to releasing a film. Many critics, rightly so, think this is impossible for most large-budget movies, owing to the fact that the bigger the budget, the more parties are involved, therefore bringing a higher probability that word will get out. Yet from a more personal perspective, I cannot imagine anything more exciting than a massive “gotcha” carried out on unsuspecting audiences on a nationwide or even global scale. Whether the movie becomes an indelible part of big-budget filmmaking history or exists as an entertaining piece of box-office fare, the legacy of a tentpole’s secret release would stick with the movie years after its initial release.

And therein lies the possibility. My mind began to run with this idea after seeing the teaser for Rogue One, the fledgling entry into the Star Wars universe outside of the main six episodes. Rogue One is the first (so far) of three “Anthology” films which will tell separate stories within the Star Wars universe. We’ve known about these films since Disney CEO Bob Iger announced the series in early 2013, much like the early announcements in the Marvel and DC universes. All of these installments, especially those in the Star Wars franchise where some films exist in and out of the so-called canon, create a lot of noise.

All this noise can potentially mask other sub-projects. Remember, 10 Cloverfield Lane didn’t enable its secret release by keeping production as a whole a secret; rather, it kept its tie to a different cinematic universe under wraps (insiders knew the film was being made, they just didn’t necessarily know what that film was). A story like Rogue One could certainly carry out production with a certain level of transparency without giving its identity away (i.e. “a science-fiction thriller about a young woman on a mission to steal plans from an evil emperor”). There are always going to be rumors around the internet as dots are slowly connected, yet with several other installments at any given time in the same franchise, there are plenty of distractions for the online rumor mills, the message boards and Reddit threads. These anthology movies are so loosely connected—especially in terms of actors, whose schedules could otherwise be an indication of franchise tie-in—that, without appearing on the screen during a release-date rollout such as Marvel’s release presentation for Phase 3 in late 2014, it could very well fly under the radar.

Of course, there are still plenty of limitations to this proposal, even if I’d like to think that it’s possible. To start, to grab a release date several years in advance (a necessity for nine-figure budget movies) shows intent to make a mark. Therefore, to grab a date years in advance tips the cards a little bit. This connects to a second problem: Money. Although the rollout of 10 Cloverfield Lane was fun for many film nerds tired of pre-release news, the stakes were also relatively lower. With a secret spin-off Star Wars film (or any other large franchise), the budget is going to inevitably be huge, and therefore the necessary box office take is going to have to be even larger. Considering a surprise release is still a unicorn in the industry, this would be an unnecessary gamble for the studio.

Still, perhaps this is just the innovative strategy needed to inject some energy into a franchise model that, while not even close to being finished (Jurassic World, Avengers: Age of Ultron), perhaps isn’t quite as exciting as it once was (Batman v. Superman: Dawn of Justice). What a secret release could do isn’t necessarily about the surprised, excited reaction at the movie theater—as great as that would be—but about what happens afterwards. Word of mouth from opening-night audiences spreads quickly thanks to social media, and the ensuing storm of surprise and satisfaction (not solely with the film, but the surprise itself) could easily carry a secret franchise film through the rest of the weekend. Even as opening weekends now elevate or damn a film, often irreparably, there’s still a chance that the level of free marketing earned through a surprise release could recoup whatever might be lost on the opening Thursday and Friday nights. It’s a gamble to let a project roll into theaters with stilted exposure, yet the possible benefits cannot be accurately modeled without any preeminent examples of such a release.

So yes, the longer I write and the longer you read, the more unlikely the opening scenario posed actually seems. What studio in their right mind would jeopardize millions of dollars in what could be labelled as a stunt, or, in their probable words, an experiment? The marketing department might fall in love despite the risk, but the accountants often get the last word when it comes to these kinds of decisions. Still, a doctor can write a prescription even if the patient never fills it, and there’s no doubt Disney or Warner Bros., or any smart company, are reading online articles, rumors, and conversations for their next brainstorming meeting. With WB’s greater emphasis on tentpoles and large franchise releases, perhaps there won’t be any room for this kind of experimenting in their release strategy. Or perhaps, with the larger-than-ever need for studios and distributors to make the theatergoing experience exciting again, this is exactly the modest proposal they need.