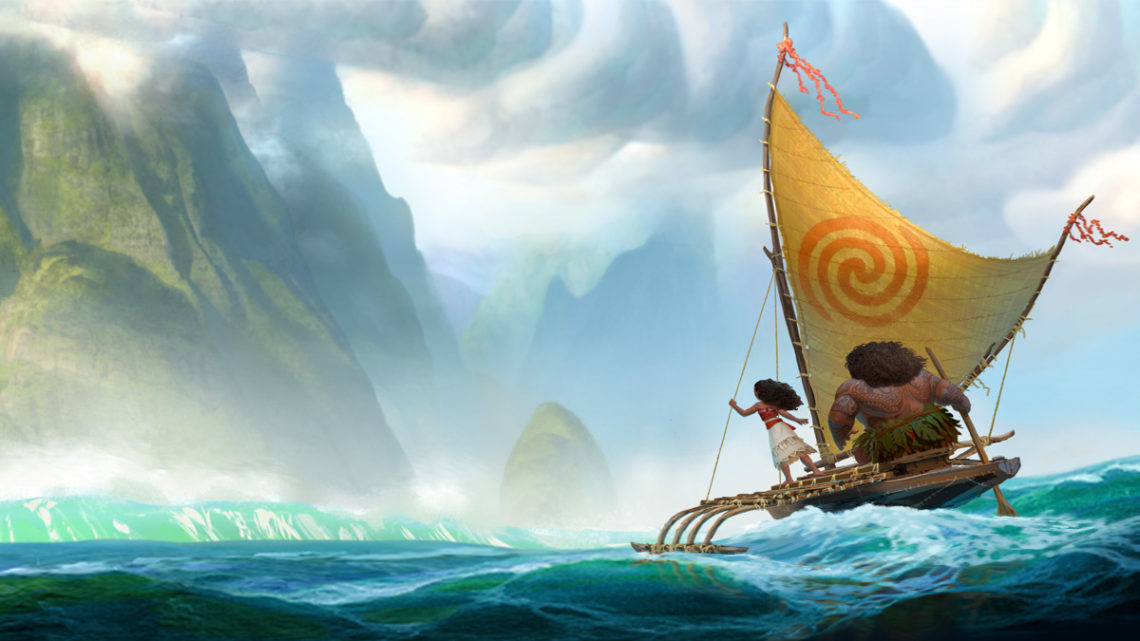 Josh Spiegel writes about the new Disney animated film "Moana" and its vast connections to the other stories of the Disney animation canon.

Early in Moana, the new film from Walt Disney Animation Studios, the title character (voiced by newcomer Auli’l Cravalho) has been guided to a discovery on Motonui Island, where she’s lived her whole life: a mysterious cavern that holds a group of massive boats that far outmatch the smaller skiffs that she’s used when previously attempting to sail past the reefs. Following the advice of her clever grandmother (Rachel House)—who defines herself as the “village crazy lady”—Moana bangs out a brief report on a drum positioned on the top of one of the boats. In doing so, she’s essentially able to see that her ancestors, unlike those who live on the island now, were voyagers. The reverie is scored to one of many original songs in Moana, “We Know The Way.” This song, co-written and co-performed by Lin-Manuel Miranda of Hamilton fame (don’t boo, it’s disrespectful), has a lyric that represents the key to the film in more ways than one: “We tell the stories of our elders in a never-ending chain.”

On the surface, this line is important to Moana as she tries to convince her father, the island chieftain, to sail beyond the reefs. Motonui is suffering from a lack of fish, dying crops, and the specter of death in other forms. Legend has it that the demi-god Maui stole the Heart of Te Fiti, thus dooming mankind to an early grave lest Maui return the Heart to its rightful place. The ocean chose Moana, we see in the film’s prologue, as a toddler to be the wayfarer to hunt down Maui and force him to return what was not his. But her pleas to Chief Tui Waialiki (Temuera Morrison), essentially begging him to keep adding links to the chain and let their people sail once more, go unanswered. So she takes matters into her own hands and sails off with an abundance of hope and the guidance of watery spirits to lead her through dark times. Soon, Moana finds the still-playful Maui (a predictably exuberant Dwayne Johnson) and is able to rope him into helping her. They make for an odd couple, fending off various monsters on their way to hopefully saving Moana’s village and restoring Maui’s demi-god status.

It’s possible that, as you read through that last paragraph, you recognized more than a couple elements within the story of Moana that are reflected in other Disney animated films. This, in effect, is the true never-ending chain, the stories of our elders being told and retold, repeated as often as the catchphrases and songs that we walk out of the theater quoting and humming. The directors of Moana are John Musker and Ron Clements, as close to living legends within Walt Disney Animation Studios as you can find; they’ve also directed The Little Mermaid, Aladdin, Hercules, and The Princess and the Frog, among others. Keeping those films in mind makes it exceptionally easy to spot the unavoidable similarities in this new one. The initially fractious relationship between Moana and her father recalls that of Ariel and King Triton, not just because the men are rulers, but because there’s a familiar push-pull those character exhibit that’s based in parent/teenager relationships. Maui’s fast-paced, wisecracking attitude, as well as the mini-sized version of the demi-god depicted in his tattoos, recalls the Genie, whose lead animator Eric Goldberg is credited here as a hand-drawn animation supervisor. The face-off in the finale between Moana, Maui, and the god of earth and fire feels rooted in the Greek mythology that Musker and Clements tweaked and messed with in Hercules. And so on.

The similarities run well beyond just Musker and Clements’ other films. That same fiery climax also feels surprisingly (and pleasantly) reminiscent of the “Firebird Suite” sequence in Fantasia 2000, as we see a winsome female character face off against a visualization of environmental destruction, only to incur a sort of verdant rebirth. Odd as it may seem, some of the bickering between Moana and Maui recalls some of the early arguing between Belle and the Beast in Beauty and the Beast before they fall in love. (It helps that Maui is also a shape-shifter, so he turns into variously beastly forms throughout.) One of the most visually remarkable sequences occurs when Moana and Maui descend into the realm of monsters to retrieve Maui’s magical fish-hook, which is currently being kept captive by a nefarious crab, Tamatoa (voiced by Jemaine Clement); at one point, the crab is shrouded in darkness and only visible by neon colors that essentially make him glow in the dark. The use of bright pinks in this scene feel like an homage to the psychedelic “Pink Elephants on Parade” sequence in Dumbo (as well as a call-back to Musker and Clements’ own The Princess and the Frog, with its depiction of voodoo magic in the scheming Dr. Facilier).

Moana is being released as we approach the 80th anniversary of Disney’s first full-length animated feature, Snow White and the Seven Dwarfs, and comes only a couple of years after the mammoth success of another Disney princess film, Frozen. The tropes of films like Moana are impossible to avoid; even the film itself is aware of this. When Maui first meets Moana, she defiantly denies that she’s a princess. Looking at her garb, her boat, and the colorful chicken who stowed away on her journey, Maui blithely states, “If you wear a dress and you have an animal sidekick, you’re a princess.” To its credit, Moana doesn’t fall into any storytelling traps, nor does it utilize all of the familiar elements of Disney storytelling. (Most obviously and worth praising: There is no romance in Moana—neither hints of a possible one, nor mentions of a future one. Even Pixar’s Brave, in spite of not indulging in romance for Princess Merida, has the notion of arranged marriage built into its premise. Not here.) But it would be wrong to suggest that, like its heroine, Moana blazes a wholly singular path. It would also be wrong, however, to suggest that’s a bad thing.

After 56 feature films in 80 years, the men and women of Walt Disney Animation Studios have trained audiences about how to watch and fall in love with their stories and characters. It is not, for example, difficult to predict one of the final shots of Moana when one of its first shots features Moana’s father showing her a sacred place at the top of the island where past chieftains put one rock on a pile to signify their time as ruler. Equally, we know from Disney and countless other cinematic storytellers that the first time the heroes and villain face off is likely not the last time, as it stands here. We know how to watch these movies, and the people making them know that we know how to watch these movies. For Walt Disney Animation Studios, after 80 years, it makes ample sense (and here, it’s also creatively logical) to tip a hat to the past. The people who worked on Moana were, it’s safe to assume, heavily inspired by past Disney animated films; for Musker and Clements, it might be Golden Age films like Dumbo, but the younger animators might well have been inspired by The Little Mermaid or Aladdin. We crave originality in our storytelling, but it is impossible to deny that the stories of our youth will inform the stories we tell as adults to the next generation.

Moana is proof of one of the slightly less-repeated axioms of storytelling: It’s OK to use familiar tropes as long as you use them well. John Musker and Ron Clements have spent their whole careers doing exactly that. If anything, Moana represents a larger step forward as the two directors aren’t quite as beholden to a specific source material. (Granted, their Treasure Planet isn’t the most faithful adaptation of Robert Louis Stevenson’s Treasure Island, but it is still an adaptation of that story.) Even more, Moana is an intriguing step forward visually, as the duo’s first computer-animated film. While it would be delightful to see another hand-drawn feature, Musker and Clements appear to be as comfortable in this format as they are in telling this story, giving life to the elements, specifically water, in vibrant ways. Moana, in many aspects, is the ultimate Disney princess movie: It’s got songs you’ll be hearing on the radio for probably a year, a winning heroine, a memorable sidekick, colorful visuals, and more. It’s a story whose various parts you may recognize, another link in that never-ending chain. But like the best Disney films, this specific link in the chain stands out in its whole.