On Hypermasculinity: The Objectification of Men in “Magic Mike XXL”

In 1973, British film theorist Laura Mulvey described the “active/passive hetero sexual division of labor,” declaring that men “cannot bear the burden of sexual objectification.” You heard it: They simply cannot bear it. Pleasure of display is warranted in art; in film, it’s a requirement. Unlike men, women are naturalized purveyors of the sexually bombastic stares that are attributed purely to our bodies. And like art, it seems, we must enjoy the suggestive indolence of Jesse watching Céline as together they cart their way through Vienna in Before Sunrise; or fawn over the crisp intensity of Count Laszlo de Almásy as he, soaking in rapacity, watches Katharine Clifton in The English Patient. Or perhaps sometimes it’s even the sleight of the camera, a stand-in for the tangible male gaze, as we watch the sway of hips from behind float sinuously in a floral qipao worn by Maggie Cheung in Wong Kar-wai’s masterpiece In The Mood For Love. Women are bequeathed the gaze, and we are all too familiar. Historically, men cannot bear such ostensible prying and so women, in their stead, are forced to.

And now there’s Magic Mike Deux, aptly titled “XXL,” the second act of Mike Lane’s (Channing Tatum) journey through the life of a stripper-turned-carpenter-turned-part-time-stripper. As we reconnect with him through the high and lows of singledom (his girlfriend in the first film left him! What? He proposed on the beach! He bought ice cream! So cruel!), we watch as he builds furniture with solitary verve. Masked in normalcy, he seems idle, ill-content—maybe he should start stripping again? Ten minutes into the film, as he cuts through a blade-like piece of metal, the sparks flying strategically like isomorphic cum, Pony by Ginuwine comes on, the bass and the beat strikes the proverbial chord. We watch in protracted adulation as he sits for a while, contemplating his commitment to dancing, and yet—we don’t care. Start dancing, Channing! Shake what your momma gave you, baby! And eventually he does. His movements are precise, fluid and exact. His composition is punchy and cacophonous, and each push moves through you, the audience, as you watch, exalted. Delicious, like burning champagne; you want more. 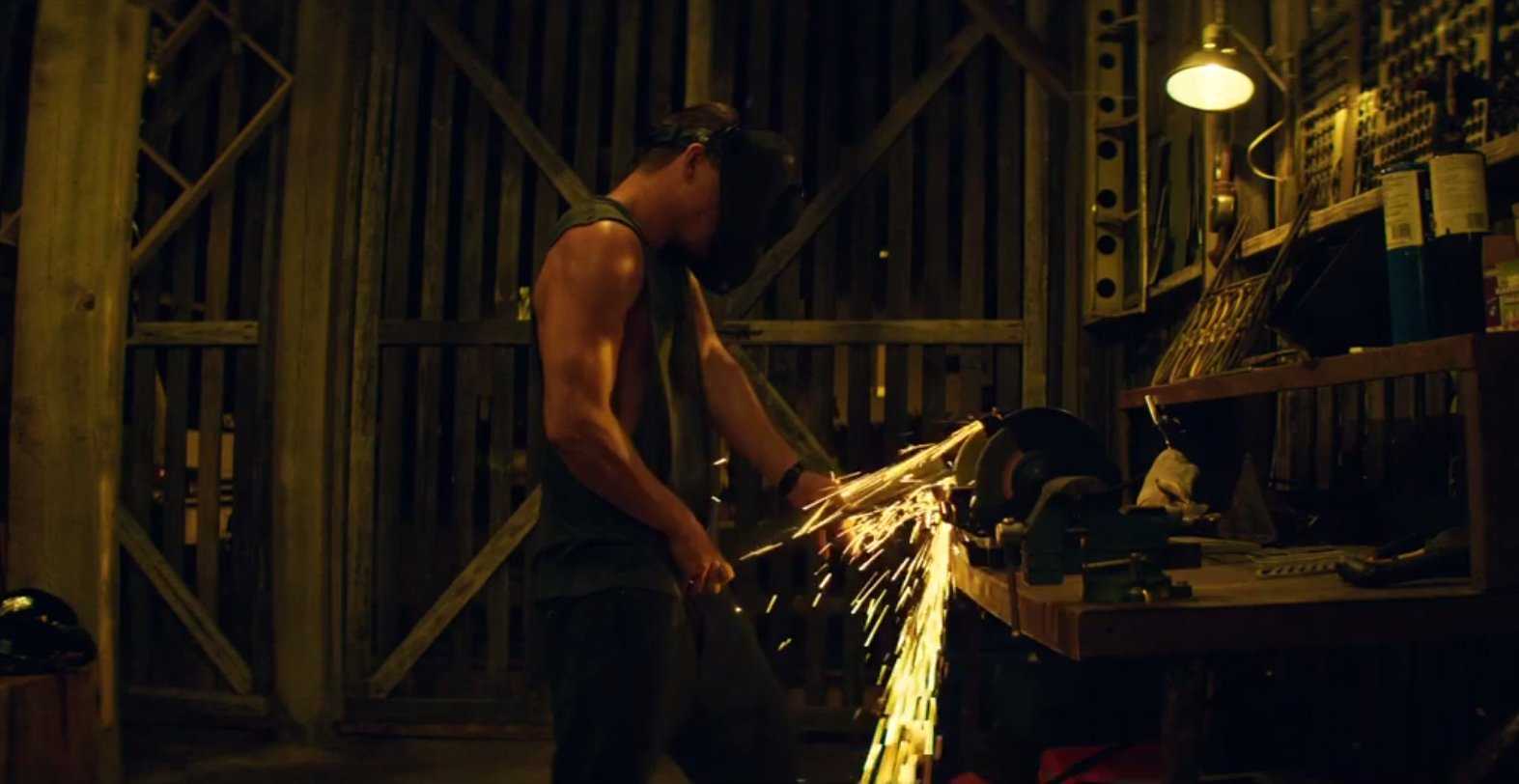 Channing Tatum is a physical dream. He’s charming yet aloof; attractive yet mildly self-conscious. His jokes are off-center, not as rehearsed or well-timed as his comedic performances in 21 and 22 Jump Street. Last year at the Toronto International Film Festival, I watched him linger at the press conference of Foxcatcher. Squeezed next to Steve Carell, Mark Ruffalo, and Bennett Miller, he looked past the audience, fidgety and not at all agile; in fact, he looked stiff. Uncomfortable, he took the opportunity to explain that he wasn’t that smart. It seemed like a statement. A few months later, in a roundtable for The Hollywood Reporter for the Oscar Special, he repeated this sentiment with composed brevity. When asked what motivated his film choices, in stark contrast to the very British intellectualized snobbery of Benedict Cumberbatch and the pomposity-stricken-but-happy-to-be-here Eddie Redmayne, he sat dumbfounded. His answer seemed sincere but short. He just got lucky, he intimated.

This lack of affectation is Channing Tatum’s most compelling quality. It’s reminiscent of Matthew McConaughey before his recent “McConaissance,” like Matt Damon’s parody of him on The Letterman Show—the carefree alright alright alright, an innocence hinged on good American values. Like pre-McConaissance McConaughey, Tatum seems comfortable by being watched—though not necessarily by performing, at least not always. He knows he’s an entertainer, and he expresses as much, but he has no interest, it seems, in being a personality. That’s why he expects that gaze—maybe he even welcomes it—but only until he stops performing. Afterwards, he’s no longer a character of his own cherished cultivation, and therefore not for your consumption. Tatum is a man who seems to want a wife and a job; those are appurtenances of human life that he requires, and his interest in film seems to be purely accidental. He seems to lack the acuity of film language, but there’s an eagerness and a Protestant-like work ethic that shines. In fact, as he sits by the sheets of paper of his furniture designs, or by his DIY costumes for his stripper-convention in XXL, there’s a continuity of hardworking blue-collar appeal. Let’s not forget that Magic Mike is loosely based on his life as a stripper. This, his severity of work ethic, is what proves to be worthy of our fascination and seduction. His sexuality is based on how hard he’d work for you. As I walked out of the screening of the film, I couldn’t help but say, “Channing Tatum is such a ride or die!”

In a recent interview with Vanity Fair, Chris Pratt—a man who went from being class clown as Andy Dwyer on Parks and Recreation to a white-man heartthrob du jour—said, “There are a lot of women who got careers out of [their bodies], and I’m using it to my advantage.” He added, “I think it’s appalling that for a long time only women were objectified, but I think if we really want to advocate for equality, it’s important to even things out. Not objectify women less, but objectify men just as often as we objectify women.” Which I guess is his kind of feminism: equality is just keeping it real for both genders, right? Hmm.

Marcelle Sauvageot wrote her memoir Commentary in 1934. It was a declarative, surreal exploration of her life after the absence of her lover and his marriage to another woman. French/German writer Clara Malraux affirmed, “Commentary should have been a milestone in women’s literature. The first book written by a woman that is not about submission.” Women submit all the time; we are a culture that hinges itself on female submission. In the introduction of the book, American poet and editor Jennifer Moxley wrote, “[the woman] must find happiness through him and for him. She must bear his gaze and be his mirror.” This is how it stands now: Socially speaking, like a ruby-red branding, raw and fleshy, women tease, strut and strip for the male audience. We do so because we have to. Women are always brought back to our bodies, whereas men have the choice to weave in and out of being sexualized. Yet even when they are, there’s no punctuation after “sexy!” there’s also “and funny,” “cool” and countless other enumerations to remind us that men are much more than just their physicality. Last year at the Emmys, Colombian actress Sofia Vergara was literally put on a turning podium like a circus trick. Look at her curves, Hollywood marveled!

For all its pleasure of the objectification of men, XXL is a stand-alone piece. In fact, even in moments of objectification, the men are, astutely, in positions of power. In its closing dance scene, Mike dances in a “mirror routine” with Malik (So You Think You Can Dance Season 4 contestant Stephen “tWitch” Boss, who never says one word) as they dance together for their pledged voyeurs. Two women are chosen to get a “lap dance” (squared to a hundred—as if you got a lap dance in all of the parallel universes in which you exist and you felt it in one sitting) and Mike’s offhand love interest Zoe (Amber Heard) is one of the “lucky ladies” chosen. Her whole experience of the “show”—as in being tossed around and getting her face smashed in with gyrating dicks, her pelvic area groped with the miming act of cunnilingus, her constant movement of being thrown up in the air and sexualized like a spinning plate—is odd, especially given that Zoe seemed pretty hesitant to go on stage in the first place. One assumes she enjoyed the experience overall, especially given her flirty romance with Mike–but we do see moments in which she seemed very obviously uncomfortable. If that was me on stage, with butts and heavy weird breathing of dancing performers, no matter how much I wanted to hit that, I’d be laugh-crying—mainly crying. So the question stands: Can men really be objectified in the same way as women? 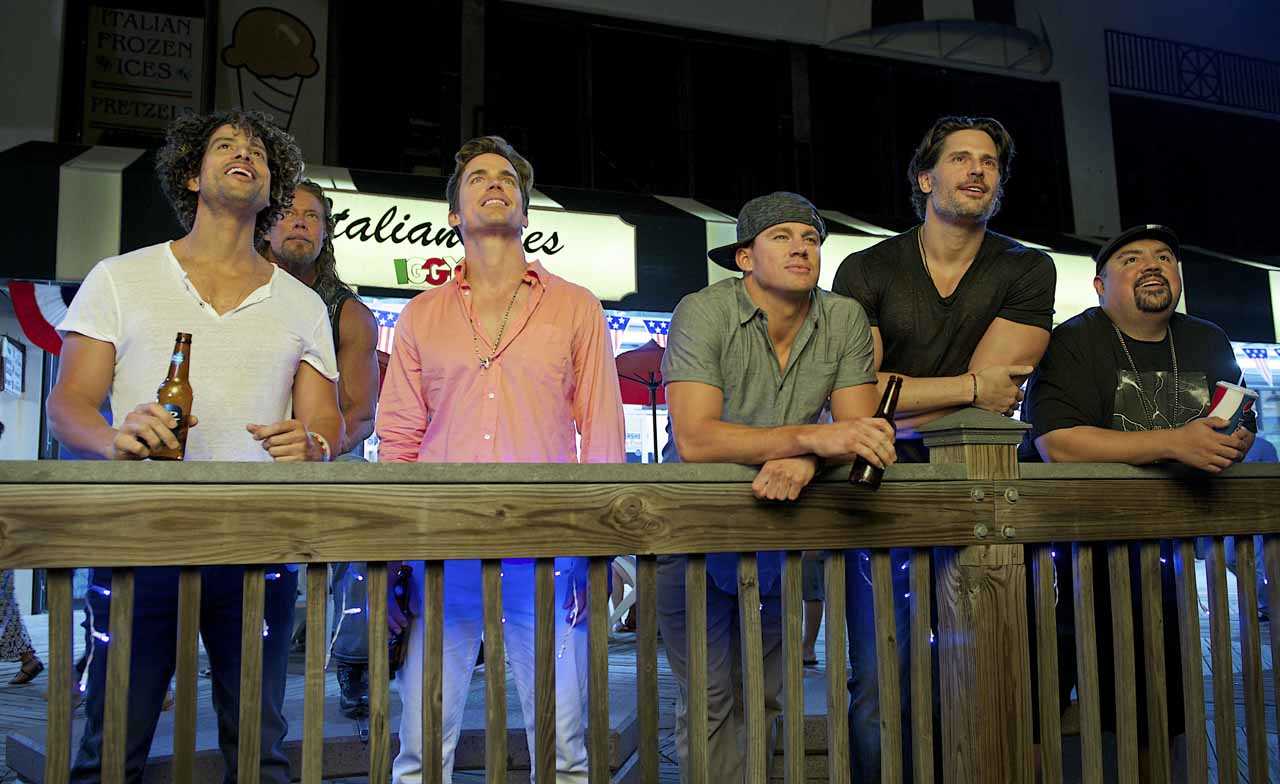 I once attended a Q&A where a filmmaker (who had no generosity of his own camera lens as he documented his heroine frail, fail and flail her way through New York) didn’t want to be filmed by the audience as he talked. He apologetically half-explained that he didn’t like the way he looked on camera. A self-conscious move, I assume, but I sat thwarted by his audacity. Why is it that men are so content and brutish about art when it is created at the sacrifice of someone else’s image or body—especially when that is of a woman’s—but not their own? The insincerity and hubris! I still don’t have an answer. In the same vein, wouldn’t true male objectification be a dick shot? Wouldn’t it be fair to see Channing Tatum’s penis crawl into a shot as unexpectedly as we see women with their shirts off, tits bouncing to the sound of Kanye? Wouldn’t that be true equality, Chris Pratt?

Would this, then, be an appropriate time to say that I want to see more actors show their dicks? I don’t even mean metaphorically—I mean actual, fleshy and prostrating dicks. If we’re going to have a semblance of conceptualized equality of the sexes, there are surely some people out there who would love to see some dick on the big screen. (And I mean real dick, Mark Wahlberg, you insufferable human being.)

To say women like being watched would be an overstatement. And yet, we flatter ourselves, societally, with that conclusion. Perhaps it’s the only way we can overlook our derision, our own double standards, that have become acceptable and have too often been destructive to all the women that have to navigate the world where they are constantly watched. Regardless, Magic Mike XXL offered something different. It was exhilarating at times, and towards the end it left me in a frenzied state as I watched the pleasured moves, a mimicry of Michael Jackson, reminding me that sometimes the purest entertainment usurps all logic and is just intensely spectacular.

8 thoughts on “On Hypermasculinity: The Objectification of Men in “Magic Mike XXL””