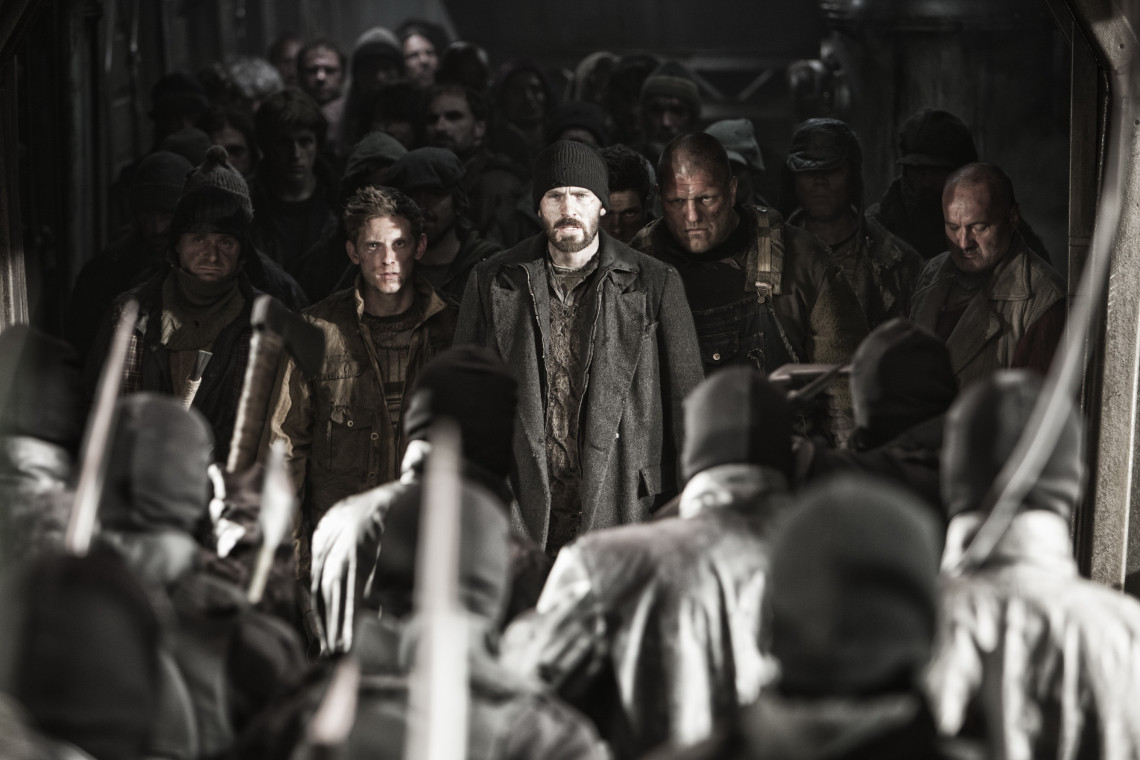 LAFF Review: “Snowpiercer” is Spectacularly Off the Rails

Once upon a time, Bong Joon-Ho’s ambitious sci-fi action film Snowpiercer was threatened with an Americanized edit by controversial industry magnate Harvey Weinstein. Fans of the Korean auteur (as well as fans of good sci-fi in general) were understandably very vexed by the decision to cut the film down by twenty minutes and add expository voice over, eager to see the director’s original, uncompromising vision. Then, a funny thing happened. The film was screened in various international film festivals, and the first jokes that came to critics’ minds were how the film could’ve actually used a little trim. Funny how the universe works, sometimes.

Either way, it turns out that that’s the version the US is getting, as Bong and Weinstein came to a compromise that it would release here in its originally intended version, but in limited release, meaning we can judge for ourselves what kind of worth there is in the director’s vision and whether or not some restraint could have improved it.

Well you know what? Maybe some restraint would have improved Snowpiercer in the traditional sense, but I wouldn’t want to live in that world. For as messy as the film is, it operates like no other movie. Bong Joon-Ho has always been a master of deftly blending different genres — hell, The Host alone operates on the conventions of about five or so genres — but Snowpiercer operates on a plane of movie watching so off the wall and bizarre that you find yourself trying to make sense not only of why it isn’t wholly successful, but how a movie like this was even able to be made, and with near-blockbuster production values.

Adapting the French graphic novel Le Transperceneige, the basic set-up is that the earth has been frozen over after an experiment meant to counter global warming goes awry. The remnants of human civilization have only one hospitable environment: a state-of-the-art, transcontinental locomotive that revolves around the world non-stop, 365 days a year, powered by its own perpetual-motion engine. However, with the start of a new human society comes some of the bad habits of the old ones. The upper-elite classes get to live in the front cars of the train, which have power, food, and luxury to spare; the middle-class is in, well, the middle, tending to the whims of the more fortunate; and the poor are relegated to the tail, which has little heat, little food, and poor living conditions all around (not to mention the periodic child abductions).

Fed up with being treated this way and with nowhere else to go but forward, the citizens of the Snowpiercer’s tail — which include Chris Evans, Octavia Spencer, John Hurt, and Jamie Bell — kickstart their own revolution, willing to fight their way to the front of the train by any means necessary. This gives the film a linear, propulsive pace that, yes, echoes that of the film’s on-rails setting. Like its characters, the story can really only go one direction, thus forcing Bong and his co-writer Kelly Masterson to find ways to continually reinvigorate the film’s forward momentum and keep it in perpetual motion. And the results are…weird.

As Evans and his team progress through the train, each car changes the style of the film, thanks in part to not only Bong’s sensibilities but also superlative art direction and production design. A moment of pitch black comedy and satire could be followed by an even more ridiculous action sequence. Scenes played up for tragedy could be upended entirely by weird performances from the supporting cast. This is a purposefully schizophrenic film, because each of the social stratas within its train act like they’re in their own insular, myopic world. Thus, when the serious-minded, would-be revolutionary Chris Evans finds himself exchanging verbal bouts with a deliciously hammy, scenery-chewing Tilda Swinton wearing dentures, we don’t mind how these two characters simply should not exist in the same universe – let alone the same room – because, in Bong’s world, but of course they would. 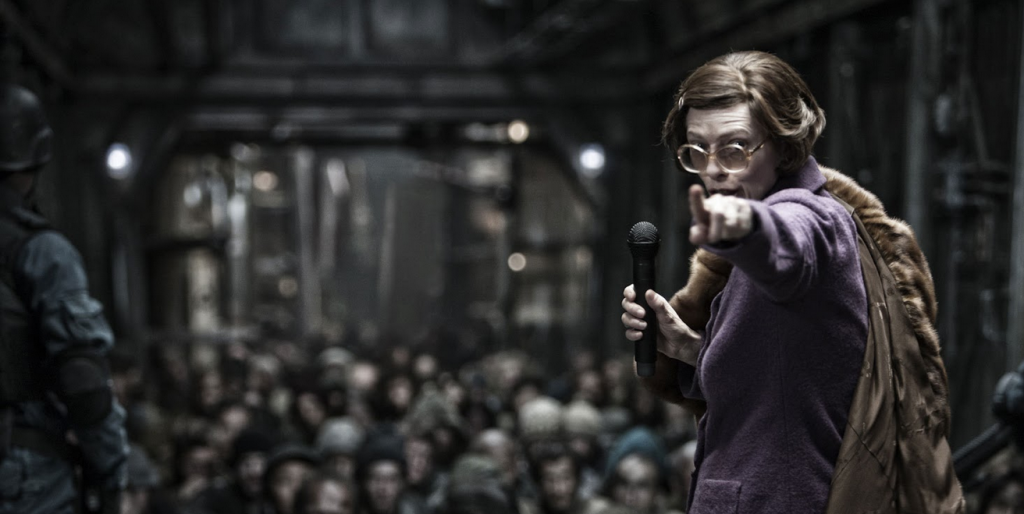 Of course, in playing with tones and genres that intentionally do not fit, the film acts more as a post-modern genre exercise than as a properly functioning movie. When major characters die, there’s no emotional spark, as the mechanics of the film’s disparate elements and how they interact with each other get in the way of the human drama at the center. Of course, that mixing and matching is meant to be the point, but that shouldn’t excuse thin characters. Furthermore, the film moves at such a propulsive pace for the most part that it can grow numbing, especially during a rather long shootout/fight sequence two thirds of the way through. It certainly doesn’t help matters that Bong has somehow forgotten how to direct good action sequences, often relying too heavily on slo-mo and spotty CG to make up for the naturally claustrophobic spaces his characters fight in.

While the cast is uniformly excellent, their characters are mostly given the short shrift. Tilda Swinton and Alison Pill, for example, do wonderful work mugging the camera as two side-villains, but they eventually exit the movie midway through. Of the actors, Chris Evans is surprisingly the film’s secret weapon, delivering what may be a career-best performance, and he’s given actual character development to boot. A monologue he delivers late in the film is so excessively grim that it could only take a seasoned veteran to keep it from veering off into parody. And yet Evans manages to ground not just that moment, but the entire movie. As chaos follows him, Evans keeps his cool, delivering a level of commitment you’d expect out of Cruise or Hanks. More than both Captain America movies, Snowpiercer shows that Evans is a real-deal movie star.

It’s important that we get some sort of grounding, because it at first feels as if Snowpiercer is all sound and fury signifying nothing. But that’s not the case. Messy as the film ultimately is, we do get a thematic throughline, albeit an obvious one, as the film showcases how societies operate on rails and simply can not change or divert course when they’re already in perpetual motion. The film makes this easily apparent, and yet it’s not playing dumb with the idea either. While its vision of the future is bleak, the film’s sense of freedom to do whatever the hell it wants and defy traditional convention shows that it isn’t willing to succumb to the same kind of strict, linear sensibilities embodied by the film’s villains.

So maybe the film could have used a trim or been a little leaner; but in doing so, we’d also lose the spark of lunacy that makes it unforgettable. Snowpiercer is as rag-tag as its team of survivors, schizophrenic as the society it depicts, diverse as its multi-cultural cast and crew, and when it decides to stop, it does so by shattering all the previously established conventions of its world and genre. That alone is worth something, whether it be in the post-apocalyptic or Hollywood-blockbuster wasteland.