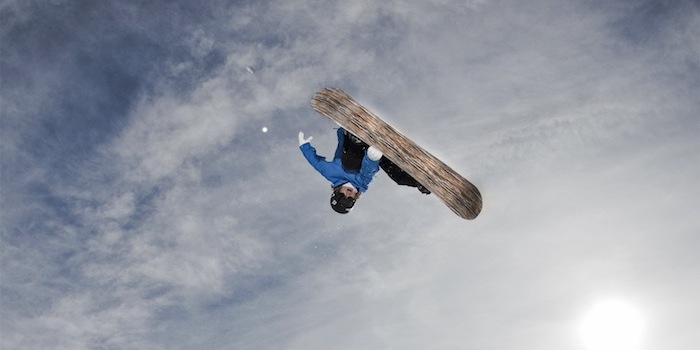 “The brave might not live forever, but the cautious never live at all.”

This quote pops up prominently in The Crash Reel. But if this documentary was meant to inspire me to abandon my extremely cautious existence and take more risks in life, then it failed spectacularly. Fortunately, it succeeds at most of the rest of what it attempts to do.

Kevin Pearce was one of the brave. He was a snowboarding prodigy, hitting the slopes and half pipes at a young age and taking the sports world by storm. In 2009, he was considered a favorite for the US Winter Olympics team. And then, on New Year’s Eve, he struck his head during routine practice, and everything changed. He suffered a traumatic brain injury, and in the three-plus years since, he’s had to slowly re-learn how to live. Filmmaker Lucy Walker was there to follow his progress.

The footage of Kevin and other TBI victims in the months just after their injuries is horrifying. There’s a vacancy in their eyes that’s unnerving on an existential level. Even years after the accident, Kevin still speaks and acts more slowly, and the look on his face still lacks some of the verve it had before. “Love your brain” indeed.

The Crash Reel is about what goes into restructuring a life. Kevin will never have what he once did – eventually, he starts snowboarding again, but competition is, and mostly likely always will be, out of the question. So now he has to find something new to invigorate himself, while at the same time adjusting to his new mental impairments.

The movie also delves into how what’s happened to Kevin has affected his entire family. In particular, his struggle to accept his new reality parallels that of his brother, David, who is dissatisfied with living with Down syndrome. The family angle is the source of most of the movie’s best moments, both harrowing (watching Kevin’s mother break down crying when he defiantly asserts his desire to snowboard again is crushing) and uplifting (something as simple as their dinnertime prayer ritual is serene and warm).

Mixed with the calmer, more grounded family drama is plenty of high-energy snowboarding footage. Walker soaks the snow-shredding action in a heavy MTV gloss. Details like neon-hued, graffiti-fonted titling purposefully take us to a 90’s-X-Games-Red-Bull-backwards-baseball-cap frame of mind. It feels a bit dated (Unless this is in fact still the atmosphere that extreme sports aim to evoke), but it works. After all, that world is firmly in the past for Kevin now. And it also helps that the board sequences are thrilling, reminiscent of the racing footage in Senna. At times the film goes absolutely brutal. There’s a montage of boarding and biking accidents that I had to turn away from. All I can attest to their effectiveness was the consistent chorus of groans from my audience.

There are a few threads the doc picks up, only to drop without any firm resolution. Towards the beginning, a lot of space is devoted to the friendship-turned-rivalry between Kevin and Shaun White, but White fades out of the story after the accident. And the movie dips its toes into the issues of safety concerns in extreme sports and the lack of proper insurance for many athletes, but doesn’t make much of an impression. It’s not a requirement that a doc be topic-focused, but there’s a lack of closure on these fronts.

Most intriguingly (and disappointingly), the film talks about how the reason that injuries like TBI are becoming more frequent is that the limits on these sports keep getting ratcheted up. Regulation half-pipes used to be 8 feet tall. Now they can go as high as 23 feet. All of this happens in the name of thrilling the spectators. They’re there to see the crashes. And people like Kevin are the ones who pay the price for their entertainment.

I learned of James Gandolfini’s death just before writing this review. Life is so tenuous. The Crash Reel is an affecting reminder of how suddenly circumstances can turn on us. But it’s also an inspiring look at how we can deal with even the most hobbling bad luck.

One thought on “LAFF Review: ‘The Crash Reel’”