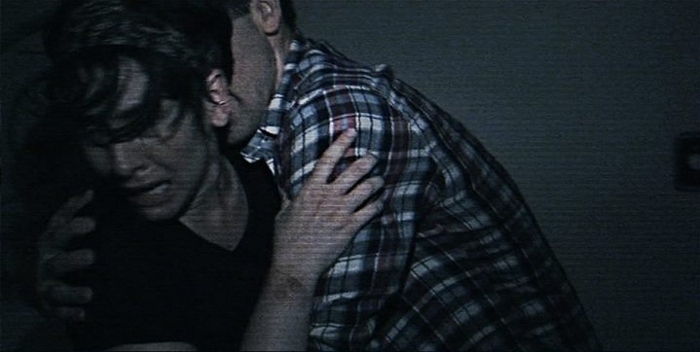 LAFF Review: ‘Delivery’ is the Rare Horror Movie Where Nothing Happens

I can’t remember for which movie it was for, but I fondly remember Francois Truffaut saying in an interview that he would make some movies just for the sole purpose of bringing one scene into existence; one scene that would “justify” the rest of the movie. Brian Netto’s directorial debut, the found-footage horror film Delivery, reminded me greatly of this quote because it’s a movie that’s entire purpose is to build up to one single moment. Unfortunately, that one moment lasts approximately 2 seconds, and everything surrounding it is uninspired and uninteresting.

This is a movie engineered specifically to build up to a brief punchline, and as disturbing and shocking as that punchline is, it doesn’t redeem us from the actual movie, which is a tepid slog sorely lacking in atmosphere, interesting characters, a good story, or even scares.

Delivery shoots itself in the foot in its very first scene by giving us a title-card that tells the audience up front that our protagonist dies. Not “missing” or something vague which could lend the story actual suspense. She dies. The film further proceeds to give a bad first impression by giving us talking head interviews that disrupt the flow of the “found-footage” conceit, laying out more and more hints about what’s about to go down and robbing us of tension in the process.

That being said, the film’s first act is one of the only genuinely clever things it has going for it. After the introduction, the film sets everything up through a style that’s both accurately recreating and effectively parodying TLC reality television shows. Said show is called Delivery, a family-oriented reality television program that’s meant to give first-hand looks of real couples going through the highs and lows of pregnancy.

The couple in question here is Rachel and Kyle Massy, who have been pining for a child after going through a traumatizing miscarriage, but have finally gotten their wish with a new baby on the horizon. But this being a horror movie and all, unsettling things begin to unfold in the Massy household during their 9 months of anticipation, and the TV crew captures it all.

If this sounds like “found-footage Rosemary’s Baby“, that’s because it basically is “found-footage Rosemary’s Baby“, only without the scares or the involving psychological drama. It’s a real shame that each character is completely two-dimensional considering lead performers Laurel Vail and Danny Barclay do the best they can with what little they’re given. Vail especially lends the film much-needed dread, as she plumbs head-first into the despair of her role. I can respect Barclay’s performance, but it’s a shame how frustrating the character he has to work with is, as he continually neglects his wife’s emotional and psychological well-being and gets flustered and angry with her for seemingly no reason outside of “because the script needs to create conflict”.

The talking-head interviews laid throughout the entire film also spoil any sense of dramatic flow the story ever had. Found-footage works best when you feel like you’re an active witness in the events unfolding on-screen, but playing up the “documentary” aspect removes audience involvement because it naturally creates a disconnect (Europa Report handled this effectively by having talking-head interviews in the first act, only to end up using them as sparingly as possible throughout the rest of the movie).

But Delivery‘s biggest sin is that nothing much happens in it. Now, “nothing” can still be scary if it’s given weight and an atmosphere to work with. Hell, barely anything even happens in The Blair Witch Project and it’s still one of the eeriest moviegoing experiences I’ve ever had, because the fact that “nothing was happening at all” only further increased the dread and the suspense.

Delivery contains no dread or suspense not only because we already know what’s going to happen, but mainly because it fails to create a palpable atmosphere through its documentary style and ends up disconnecting the viewer. It’s just a lot of empty bickering and arguing between a couple, which could work if the dialogue authentically depicted the struggles of real couples going through pregnancy — but it doesn’t.

The film doesn’t even do much in the way of actual demonic happenings. There are a few scenes where Rachel hears mysterious noises in the night, but they don’t amount to anything and every scare ends up feeling flaccidly executed, with a lot of the film’s already weak jump-scares coming from camera distortions instead of anything actually scary.

A horror movie can be many things, but one thing it should never, ever be is tedious. Delivery has the seeds of an effective found-footage horror film, yet stumbles in just about ever regard. The only reason why its grade isn’t even lower is because so little happens in it that it can’t even earn the moniker of being “interestingly bad”. It’s just a load of nothing, and sometimes, that’s more frustrating than something so terrible it’s mind-boggling.