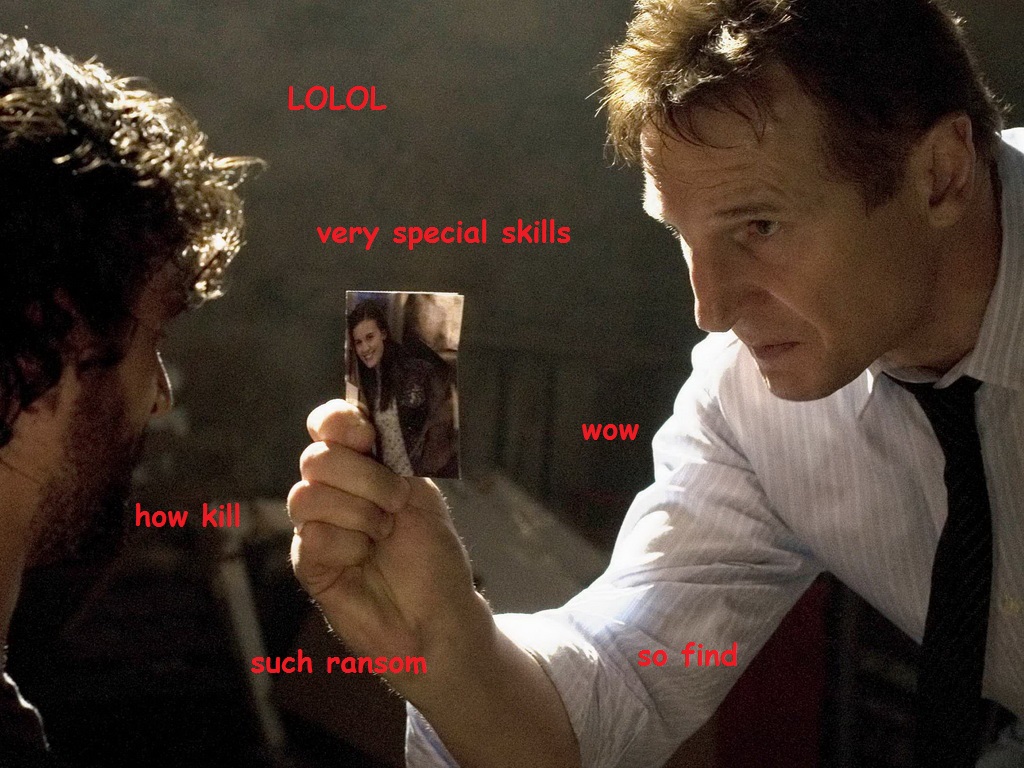 I Will Find You, and I Will Mock You: The Best “Taken” Parodies

Liam Neeson shoots, karate chops, and broods his way back into the hearts of moviegoers everywhere on Friday, January 9th. Yes, folks, we are but mere hours away from the release of Taken 3 (originally Tak3n, changed for those confused by the use of a “3” in lieu of an “E”). By now, everyone on the planet should be familiar with ass-kicking, family-saving, ex-CIA patriarch with a “particular set of skills” Bryan Mills. The Taken series has become one of the more successful trilogies – that is, assuming God sees it fit to bestow his mercy upon us and let Mills finally retire after three films – of recent years. And as we know, ubiquity often leads to parody, so over the last few days, I have scoured YouTube in search of the best Taken parodies. They are plentiful, but I think I have found a unique set of videos that will satiate your Taken hunger.

If there is a father who stands in starker contrast to Bryan Mills than Peter Griffin, well, that position has not yet been … taken. Mills is the hardboiled brand of Hollywood masculinity, while Peter Griffin of Family Guy is of the inept, self-seeking, idiotic masculinity, a parody of sitcom dads. The show flips the famous phone call from the first Taken. We know Peter doesn’t have the skills, and hearing his pathetic attempts to bargain for Meg’s life make this a great foil to Taken‘s gritty earnestness.

Captain Hippo’s “Taken with a Real Dad” goes all in, playing like an extension of the Family Guy parody. Translating the series’ premise into the average American family, the original’s hurtling seriousness hangs over this parody, letting this one’s real-life dadness breathe. With this actual father totally game for the spoof, every reaction and distraction is played to comical effect. We should all hope that our dads never gets this call.

In my parody search, I tried to avoid false trailers, because they usually go with the tired joke that there will be thousands of Taken sequels, with Mills still having things taken when he’s in a nursing home. So I couldn’t resist including this one, which depicts Taken 3 as prequel. Smosh plays this as an origin story, featuring Mills’ very first “taking”. You don’t become an overwrought badass overnight.

Here’s another fake trailer, this one for a mash-up of Taken and the Peter Pan story. Riffing off of soundalike words, this version of the Mills family story is titled Took. Replacing evil kidnapping gangs with pirates, Mills with a weaponry-skilled Peter-Pan-turned-dad, and the main villain with Captain Hook, Took is actually well-shot and edited for a parody. Also, Tinkerbell totes a machine gun.

For a simpler and actually really funny parody of the first Taken‘s phone call, footage from Tropic Thunder is cross-cut with Taken to show that the only man alive able to reign in Neeson’s monologuing badassery is the one and only Less Grossman. Oh, how I love Tom Cruise.

From Union Pool comes the most endearing and charming Taken parodies in all of the Internet. Featuring the voicework of George Takei and his husband Brad, this animated take has Brad kidnapped by the octopus-seductress Ursula Major (the twin sister of Ursula from The Little Mermaid) in a plot to steal George’s beautiful voice. With its sweet tone, this parody undercuts the broad masculinity of the Taken series in favor of the power of love, making it the parody I enjoyed the most of these.

This is a cat reacting to Taken. What more is there to say? How long until we get whole series of these? Adorable.