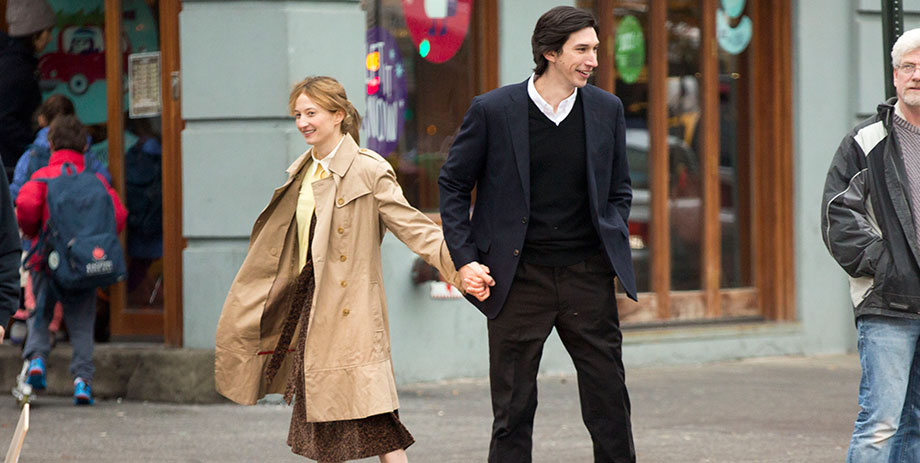 With a knife in hand and her husband breathing over her neck inside their kitchen, Mina (Alba Rohrwacher) tells Jude (Adam Driver) that she feels like he’s controlling her. They have a child together, but to say that her pregnancy was an act of union would be unfair. It is not explicated, but the scene of them conceiving the child communicates that Jude impregnated Mina as a means of keeping hold of her. Had it not been for that sexual encounter, Mina would have continued her work at the Italian embassy, transferred to a different country, fought off her heartbreak, and carried on with her life free of the man whose weight she feels against her back and without the child that precipitates the hot-blooded tempest that is Saverio Costanzo’s Hungry Hearts.

In a sense, Mina is right to challenge Jude’s sway over her. He has forced her into motherhood, yet disagrees with her methods as a mother. Mina doesn’t want the child to eat meat, nor does she dare expose him to the sun. Feeding him avocados and oils instead, she strives to clear the infant of impurities. Her desire to keep her child pure is in part because any loving parent would want that, while slightly on account of a fortune teller having told her that her baby was an indigo child – a child with supernatural abilities. Jude is instead a modern man, an engineer and a rationalist, who plainly sees that his child is suffering. When a doctor imparts to him that the boy is troubled with stunted growth as a result of his diet, Jude panics, his opinion of his wife steadily transmogrifying from compassionate to timorous.

But we mustn’t forget that one scene in the kitchen, meticulously filmed by Costanzo. “I feel you want to control me,” Mina tells Jude, the room bright, the lens daunting. As she says these words, her grip on the knife remains firm. This is not the tale of a man oppressing a blameless woman. A film like that would be too redundant, and Hungry Hearts denies ideologies, making certain not to merely pit man against woman or assert patronizing –isms. It is an expert story about two individuals in the midst of quashing their other’s spirit – methodically, steadily, and unaware.

Neither character, however, is conscious of what he or she is doing to the other. Mina’s most unfortunate characteristic is that she is unaware of her absolutism as well as the delusions her lack of self-consciousness breeds. But the same can be said for Jude. Both to himself and the audience, he looks like the sympathetic character of the film, pinned into a situation he cannot escape from, with a dying child, and a mentally degenerating partner, but that is not necessarily the case. His sense of self-pity continually eclipses his conceit.

The irony is that the real victim of these ongoing horrors is the baby, who is hardly present in the film and whose name is never revealed. The infant is no more than a prop for the unveiling of his parents’ mutual intemperance. Slowly and unconsciously, Jude and Mina work together to destroy the child, mutilating his diet and, in due course, his fragile mind.

The starving heart that the film intimates is more than just a need for sustenance. These are hearts famished for fulfillment, looking to rectify their own missteps by projecting them onto another, new being. Mina never had a mother, and in consequence, she is too present as one herself – too possessive, too inexperienced, and ultimately injurious to her boy. Just as she is hungry for love, Jude is hungry for concession, exploiting logic to assert his sway. Yet in the midst of these metaphorical hungers, their boy is starving, not purely for food, but for a name he’s not been given, and the unconditional love he’s been refused.

Worth appreciating throughout the film is the element of love between man and wife that never disappears from the screen. Thanks to masterful performances as well as the script, as Jude and Mina struggle against one another’s dogmas, they never once abandon their care for one another. Even the two clear-cut instances of physical assault in the film are so divergent in meaning and intent that neither propagates sentiments as simplistic as contempt. The complexity of the couple’s situation demands empathy from the viewers rather than naïve judgment. Even the intrusive leitmotif that tracks Mina’s movements as if she were a killer shark signal more to Jude’s paranoia than they do her harmfulness. She is just a mother wishing to protect her child, and the film makes sure to detail precisely how much she cares for him, and how happy the child is in her arms.

That the Italian director Costanzo has set his film in New York City is telling as well. The metropolis adds to the film’s disorder, signifying how small these people are compared to their city, and how little they matter in its blanket of bureaucracy. Jude, the rationalist, can do nothing to stop his wife, because he has no rational evidence against her. His city’s laws demand him to have tangible proof of Mina’s protracted killing of their son, but his only evidence is in his head, forever trapped like he is.

Bereft of the machinations of most modern American films, the film’s preference for the English language is also welcome. Encumbered by gimmickry, Hungry Hearts neither romanticizes nor demonizes, refusing to implicate one gender or principle against the other. With a full stomach that lusts for nothing but the experience of a mighty story and free of the dogma that even its characters cannot rid themselves of, the film almost stands as a metaphor for good filmmaking. Because he does not baby his film with supercilious ethics or ideologies, Costanzo allows his viewers freedom to look into the sun and find inside it a couple tussling their way into perdition, hand in hand, in an unaware but well-choreographed pirouette. Though it’s a blinding sight, it’s even more difficult to turn away from it.