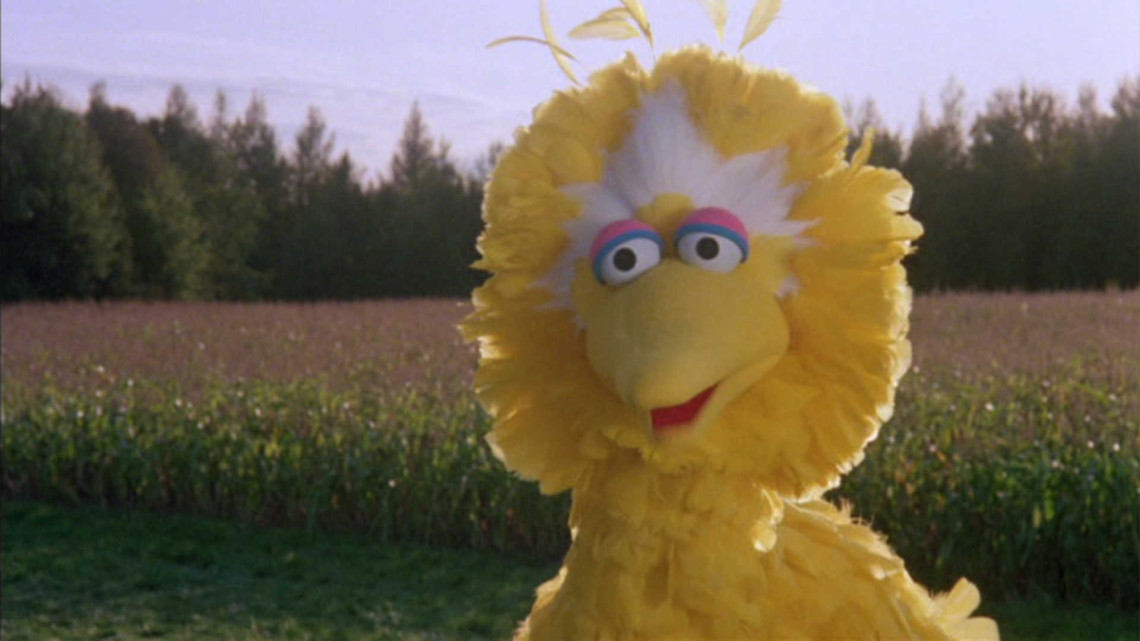 My partner in crime, Steven Boone, recently met Luis from Sesame Street on the MTA subway. Since MTA trains are denoted by a letter or a number, Sesame Street was literally brought to Boone by one of the items that has “sponsored” the show since 1969.  Luis told Boone that he’d just eaten dinner with his Sesame Street co-star, Bob. “Had you gotten on earlier,” Luis said, “you’d have seen Bob too!” He then graciously posed for a picture, which Boone emailed to me.

After reading with envy about Boone’s brush with television royalty, I scrolled down to find the familiar, friendly face of actor Emilio Delgado. Delgado played the proprietor of Sesame Street’s Fix-It Shop for 43 years, entertaining my generation and the one that followed. While he looked older than he did when I first encountered him on TV in 1973, I could still see my childhood’s Luis staring back at me. I admit it was a little jarring at first, but the moment I’d registered that, “yeah, Luis got old,” my brain cruelly reminded me that so had I.

The best thing about being a Sesame Street Muppet is that the cast gets older but you stay the same age. Big Bird, who’s been 6 years old for 46 years, doesn’t have to dye his feathers nor be subjected to scrutiny by fortysomethings like me who remember  his “younger days.” Sesame Street’s recent Birdman parody showed that Big Bird hasn’t aged a day. He’s also still being voiced and inhabited by Caroll Spinney, whose documentary I Am Big Bird opens later this week. 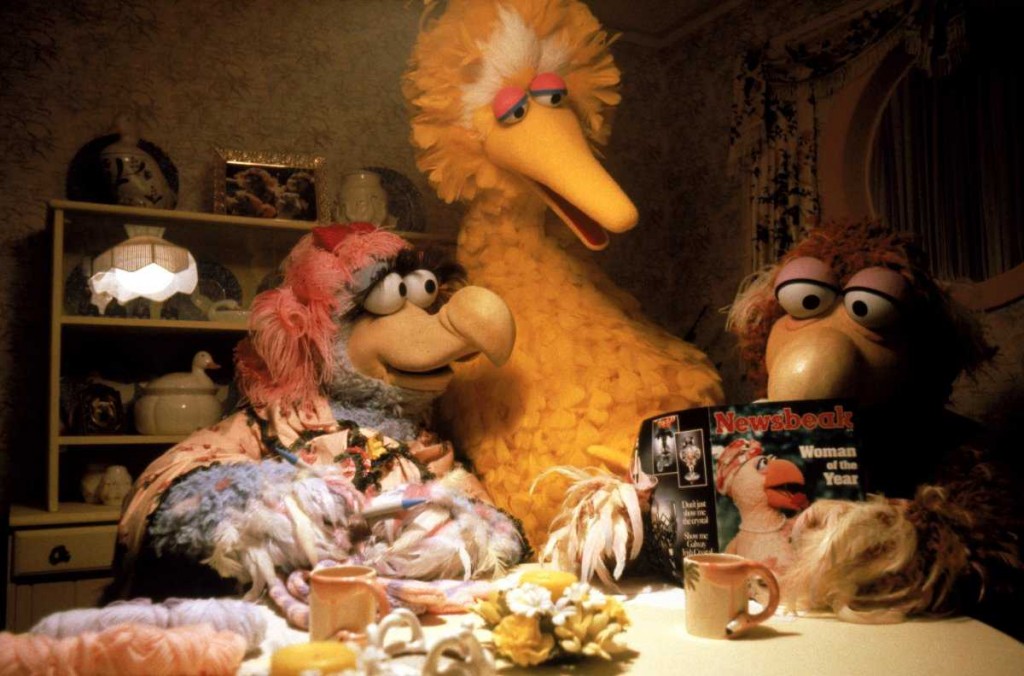 That documentary beget this appreciation of Big Bird’s first (and only) big screen starring role in 1985’s Sesame Street Presents: Follow That Bird. Long before Tyler Perry, Sesame Street put its name in the title and its lead actor in an ostentatious costume. And while Big Bird’s face has as much mobility as a Botoxed actor’s mug, he still manages more genuine emotion than Madea ever will, thanks to Spinney’s puppetry and voice.

Director Ken Kwapis shoots his avian star as if he were human, never once fearing any cracks in our suspension of disbelief. He bestows upon Big Bird the kinds of close-ups Lillian Gish invented, and one swears that there really is something going on behind those fake Muppet eyes, something alive and relatable. Such is the genius of Jim Henson’s creations. I have always accepted them as sentient beings, even in their worst movies. It’s impossible for me to lose the nostalgia I have for them, nor for Sesame Street. Follow That Bird plays into those feelings in major ways. For starters, the humans who inhabit Sesame Street look exactly as they did when I was a kid. That was even more jarring than seeing the 2015 version of Luis.

Until Elmo took his title, Big Bird was the show’s symbol of childhood innocence. Elmo’s current reign of terror is foreshadowed by a silent appearance in a window of 123 Sesame Street at the end of Follow That Bird. But before Elmo channels his inner Eve Harrington, we’ll spend 88 minutes basking in Big Bird’s childlike wonder. For most of his debut feature, Big Bird is trying to find his way home, which means he will at some point ask the most famous question in all of TV land: “Can you  tell me how to get to Sesame Street?”

Follow That Bird begins not with the expected Warner Bros. logo but with the first of its many cinematic nods to the parents in the audience. The film will crib from North By Northwest and a few other movies later, but its opening joke is an homage to George C. Scott’s first scene of Patton. Here, Scott is replaced by an equally grumpy Oscar the Grouch. Oscar is one of the most negative characters ever to grace a TV screen, full of more insults than Don Rickles and an unquenchable desire to be mean. So, of course, he was my favorite Muppet as a kid.

Nowadays, we’d never get a character like Oscar—he offends the sensibilities of the parents of today’s overprotected children. But in this movie, he gets to offend with “The Grouch’s Anthem,” a paean to complaining and pointing out the flaws of others. “Something is wrong with everything,” croons Oscar, “except the way I sing!” After his musical number, which is a fantastic showcase for Caroll Spinney’s other Muppet character, he declares “you’ve seen the best part of the movie! Have a rotten time!” 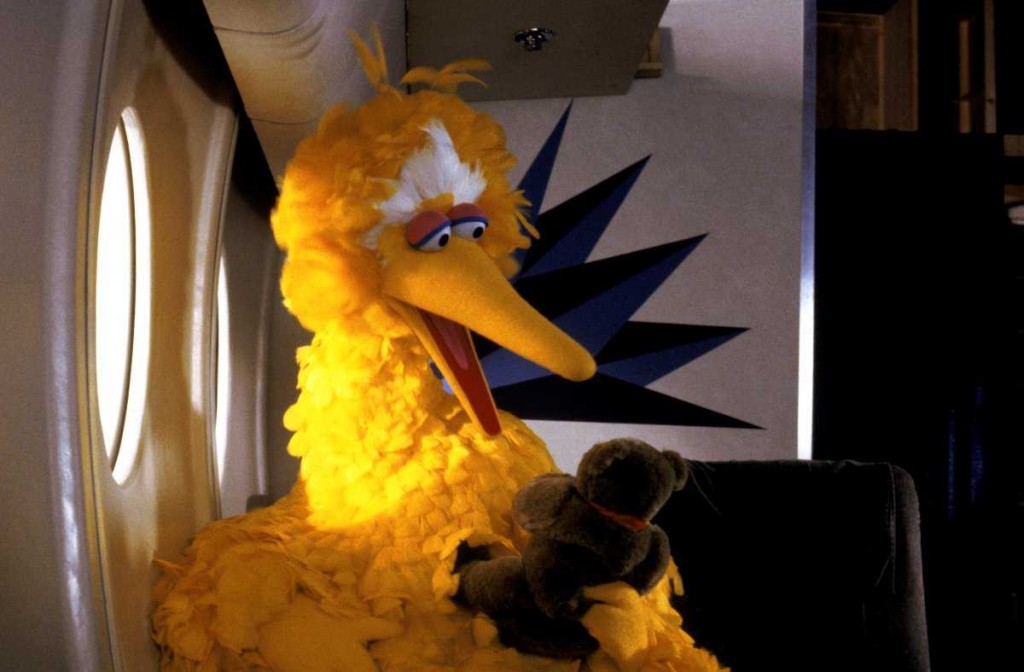 The only one destined for a rotten time is poor Big Bird, though his endless optimism keeps him from dwelling too much on it. After realizing that he doesn’t get to interact often with birds on Sesame Street (an unbelievable notion if you consider the pigeon infestation at Bert’s house), he becomes an easy target for the bewigged Miss Finch (Sally Kellerman). Snooty Miss Finch thinks that birds should only “be with their own kind.” She’s REALLY adamant about it, to the point where one expects her to defend her position by stating “I’m not a birdist! Some of my best friends are human!”

Miss Finch convinces Big Bird to leave Gordon, Susan, Maria and all his familiar Sesame Street brethren behind and take up residence with the Dodo family of Oceanview, Illinois. When the Dodos turn out to be as hostile about other species as Miss Finch is, Big Bird runs away, figuring he can get back to Sesame Street in 3 hours “because it took only 2 hours to fly here by plane.” Unfortunately for Big Bird, he can’t fly (which is why Oscar calls him a “big yellow turkey”). So he starts walking, and Follow That Bird becomes a joyous road movie. Along the way, he meets Waylon Jenninngs, some cute kids and numerous members of SCTV, including evil brothers played by Dave Thomas and Joe Flaherty, and a cop played by the late John Candy.

Meanwhile, Big Bird’s disappearance is reported by Chevy Chase (who quotes Mister Rogers on his newscast), putting the Sesame Street cast on the road to find him. The cars they employ are amusing pieces of set design. Oscar drives the “Sloppy Jalopy,” a junky car also inhabited by Big Bird’s biggest protector, Maria aka “Skinny” (Sonia Manzano). Gordon (Roscoe Orman), his sister Olivia (Alaina Reed), Linda (Linda Bove) and Cookie Monster jump into a yellow VW bug that Cookie can’t stop eating. And the Count, the compulsive vampire who loves to count things, drives a huge purple pimpmobile that Roscoe Orman would have killed for when he played Blaxploitation hero Willie Dynamite.

Other characters take to the skies in search of Big Bird. Ernie and Bert zoom around in an old bi-plane, while Grover flies through the air as his inept superhero alter ego, Super Grover. 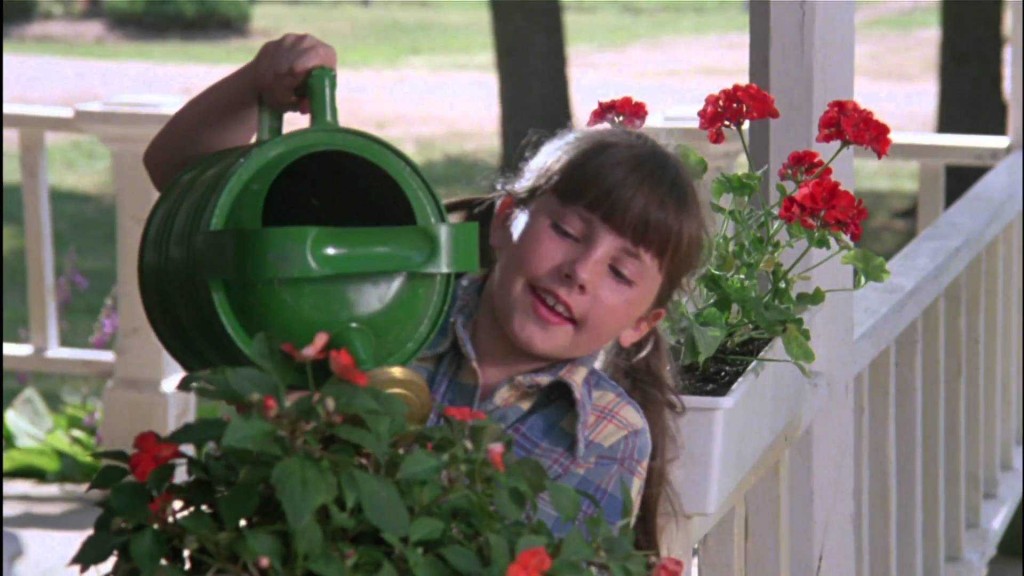 Follow That Bird has an excellent score primarily written by 14-time Emmy winner and composer of many Sesame Street ditties, Jeff Moss. Jennings has a country number. Ernie and Bert do a great duet about flying upside-down, with an especially memorable vocal by the late Jim Henson. Big Bird has a peppy number with some farm kids he meets and a sweet, contemplative one with Olivia. Later, when things are most dire, a figuratively (and literally) blue Big Bird sings the saddest song I’ve ever heard in a kiddie movie. It’s so sad you almost wish Judy Garland could have covered it. Kwapis catches a tear running down Big Bird’s cheek after the number, and the moment is as shameless as it is profound and moving.

Of course, Big Bird makes it safely back on Sesame Street, where he is reunited with his best friend Mr. Snuffleupagus and the diverse group of people and Muppets who comprise his extended family. This neighborhood diversity has been the show’s most enduring message. Sesame Street has never shaken its late-60s flower child sensibilities, and I can’t stress how much I was affected as a child by seeing people who looked like me on the show.

As a final note: Two things surprised me while watching this movie. The first is how much I remembered of it, from the song lyrics to lines of dialogue like Kermit the Frog’s corny as hell but still hilarious chicken joke. I hadn’t seen this movie in at least 25 years, but it all came rushing back to me in powerful waves, making me giddy with childlike pleasure.

The other thing, which is much sadder, stemmed from realizing how many people involved with this film have passed away. For Paul Bartel (who plays a cook in a Grouch Diner I’d kill to visit), co-screenwriter Judy Freudberg, Jim Henson, John Candy, Jeff Moss, Waylon Jennings, and others, Follow That Bird is a lasting testament to their craft. It’s a sweet, wonderful little movie that proves that, unlike Luis, me and everyone else, Sesame Street is ageless.

(This article has been brought to you by the letters O and D, and by the number 30.)