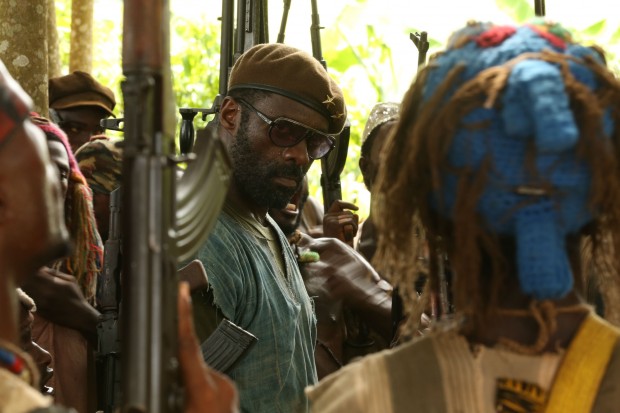 Being both a fan of Idris Elba and Cary Fukunaga, Beasts of No Nation has been high on my radar since the film was announced and today brings a welcome first look at Idris Elba in the film. The film is adapted from Uzodimna Iweala’s story, following a young boy named Agu whose African country is thrust into civil war, and must join a unit of mercenary fighters led by Idris Elba’s character, who you can see below. Agu must deal with the death of his father and disappearance of his mother and sister, while befriending a mute boy named Strika as they try to survive this war together.

Idris Elba is in a much-deserved hot streak of his career, landing parts in big-budget films like Prometheus and Pacific Rim while ruling the small screen as well with his fiery performance on BBC’s Luther. To see him bring his talents to what is likely to be a fierce and captivating performance from him is enticing. The fact that it’s under the direction of Cary Fukunaga is even better. If you weren’t sold on Fukunaga after Sin Nombre and Jane Eyre, he got you for 8 weeks with HBO’s True Detective. Fukunaga gained nothing but good will and job offers from his stellar work on the mini-series, and I’m very happy he used the momentum to get a smaller foreign-set film like this made.

Beasts of No Nation currently had no release date, but the moment it does we’ll be marking our calendars. Check out the photo below.

Source: Deadline (via The Film Stage)