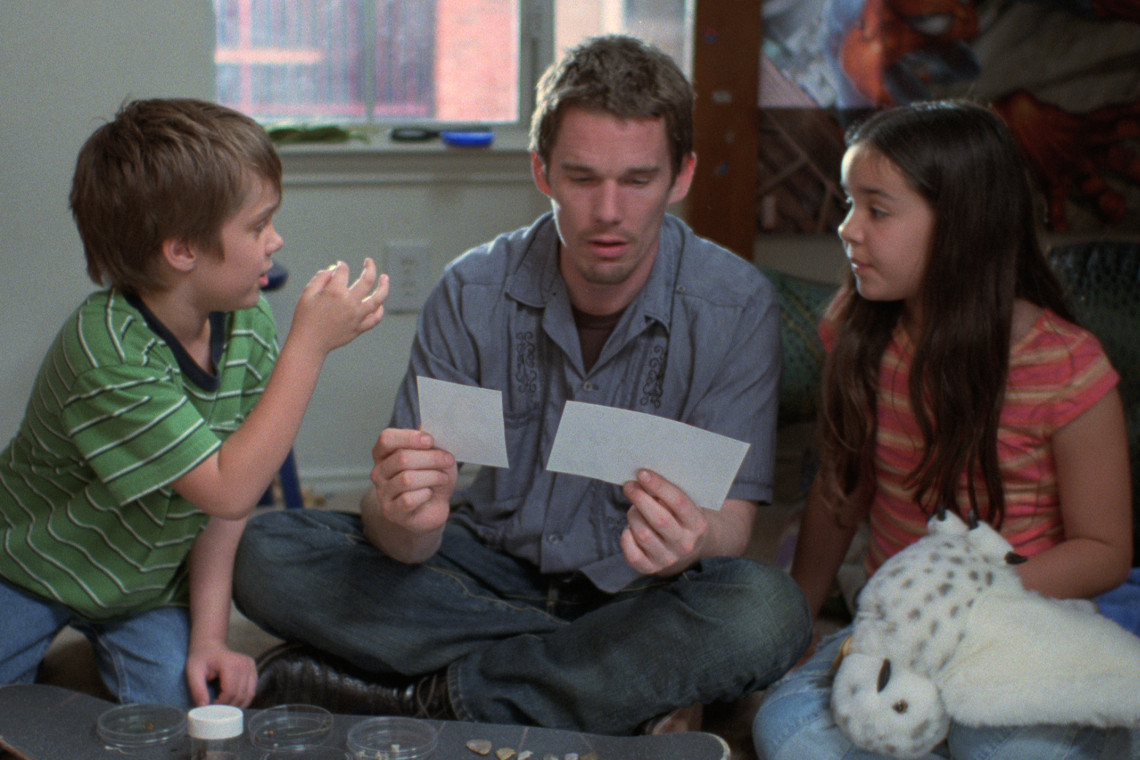 Embracing The Magic: What “Boyhood” Forgets About The “Dance” Of Childhood

In the second hour of Richard Linklater’s Boyhood, Mason Jr. (Ellar Coltrane) asks his father (Ethan Hawke) about magic in the real world. Hawke rebuffs his child, telling him there’s no such thing as magic, and then turns away and sleeps. The camera rests on Mason’s cherub eyes as he contemplates the wonders of the world and pays no heed to his father’s mistrust. The glimmer in his eyes is supposed to mirror that of the audience. After all, how can magic not exist when the film itself is so magical?

However, while Boyhood is undeniably a fascinating film, the intrigue it engenders has little to do with its substance. Though it succeeds as a cinematic experiment (Linklater filmed the same actors every summer for 12 years to watch them mature onscreen), it ultimately fails to be meaningful. It’s an empty shell, but the shell is lacquered with such splendor that it’s easy to overlook the hollow core. In Boyhood, the magic of childhood isn’t in its complex emotions, but in its glossy veneers. As Coltrane grows up, Gameboys turn into XBoxes, Cat Power eases into Wilco, Obama and McCain come and go, and the Beatles remain eternal. The characters’ feelings are left to simmer somewhere else; Boyhood’s sentimentality rests on timely songs and Buzzfeed recollections rather than genuine emotions.

There are a few moments that tug at the heart, sure—Hawke’s passionate song about a family split springs readily to mind. Yet these scenes only make the rest of film all the more infuriating. They indicate that Linklater is capable of deep feeling but simply refuses to indulge in it, relying on artifice instead. Boyhood is mostly filled with moments so mawkish and forged that they seem more like endorsements for the American Dream than scenes in a film that prides itself on mirroring reality.

None of the characters in Boyhood are ever really scrutinized. Instead, they are peered at until they are forgotten. The stepfathers are disposed of, never to be heard of again, and even Samantha is forgotten when she inevitably grows up and goes to college. Did she ever really exist? Throughout the film, she’s an object meant to be looked at but not felt; she’ll amuse us with Britney Spears impressions, but she’ll never make us feel. Linklater seems to have forgotten that childhood is more than recurring songs and objects: it’s a distinctive experience that produces a myriad of mismatched individuals. The characters in Boyhood are indistinguishable from each other because aside from teenage dorm-room musings, they do not think. And what is a human without its thoughts?

There is no tangible evidence that these children have any feelings at all. They are left unmarked by divorce and a string of alcoholic fathers. Not even heartbreak can wear Mason down. Though they planned to spend their college years together, his split with his girlfriend leaves them both unscratched. He tells his father that he’s sad, but he’s quickly reassured that she wasn’t good enough, and that’s the end of it. Life in Boyhood is far simpler than the reality it tries to echo. It’s a waste of the most enchanting subject matter of all: the period of life when an individual is most in touch with his immediate emotions, sorrow is a door away from joy, there is wonder in every sight, sound, and motion, and entire personalities are constructed out of every event.

The film never dares to let Mason fail, nor does it ever truly distort anyone’s image. His reckless father is redeemed for both his kindness and his hidden change in lifestyle, while his cruel alcoholic stepfathers are pitied due to their difficult professions and situations. If the film is being told from the eyes of a wistful adult, then Mason must be the most virtuous adult of all, without any trauma or ill-will, fully capable of empathizing with every person who has crossed his path, and always able to forgive.

He’s also an exceptional talent at just about everything. After a fleeting scene shows him taking photos with a camera, he is suddenly transformed to a man full of artistic passion. His apparently unique eye is never questioned. He is never tormented by doubt, at least as far as we’re shown. And unlike so many others, he never stumbles in his ambitions. Instead, he wins a silver medal, and then a scholarship to his preferred university, where he immediately chances upon an ideal roommate and the gorgeous, tap-dancing girl of his dreams. His entire essence is depicted as a one-dimensional echo of a put-together past, seen through the eyes of a soppy optimist who refuses to acknowledge that life was more than just a series of checkpoints characterized by melodies and many things. His appearance is the only part of him that changes. The rest remains tedious and static, everlasting and decomposable—he might as well be made of plastic. 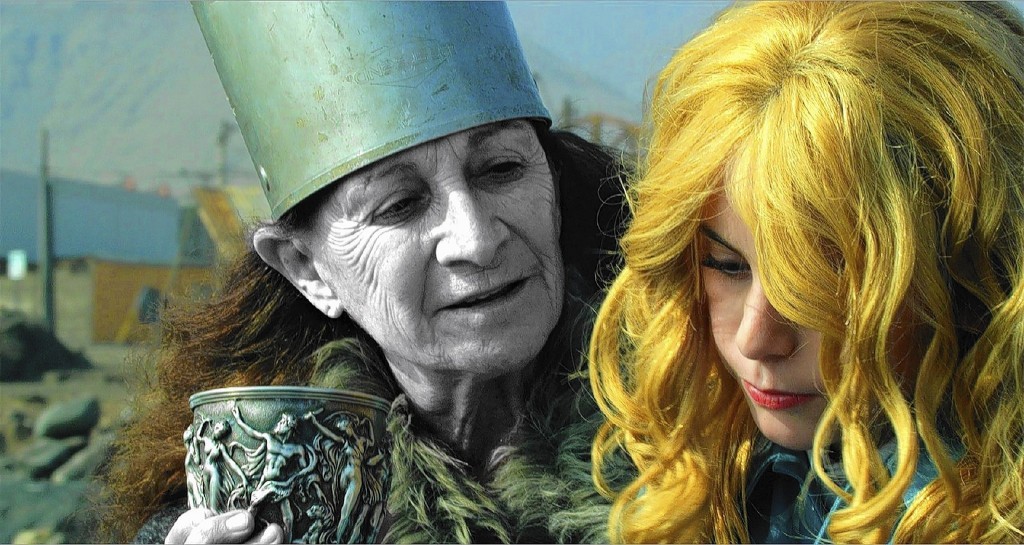 Another film that looks back at childhood is Alejandro Jodorowsky’s The Dance of Reality, which effortlessly captures the otherworldly essence of the past instead of endeavoring to simply reflect it. Jodorowsky’s film is peppered with songs, violence, and the grotesque, but it is endlessly captivating. What Jodorowsky strives for isn’t to examine the past, but to remember it with a matured gaze. He stars as himself, while his real-life son Brontis plays his father. He presides over his own childhood like a protector, ever-present and ceaselessly reflective, holding his younger self back from self-destruction, but allowing him to fail and transform into an older man.

The Dance of Reality doesn’t merely look at the ripening of a child, but a man as well. The protagonist of the film is in fact Jaime Jodorowsky, the director’s father, whose hatred for Chilean dictator Carlos Ibáñez del Campo leads him to a love for humanity. Jodorowsky’s film brims with empathy, but unlike the emotions of Boyhood, it’s earned. When the dictator cries over a murdered stallion, Jaime recognizes that even evil loves, just as he himself loves the child he torments.

Jodorowsky remembers boyhood for what it is: an innocent world of imagination and wonder. His mother (Pamela Flores) sings when she speaks, teaching her son to hold tightly to imagination even when adulthood threatens to wash it away. Cleverly, Jodorowsky’s so-called “dance of reality” bears little resemblance to the reality of practicalities and reason. It is instead a surreal journey of emotions, senses, and experiences. In Jodorowsky’s dance, traces of reality are deepened by the emotions attached to them, bolstered by memories, and made enchanting by how they are recaptured. The men and women young Alejandro comes across did indeed exist in his past, but it doesn’t matter how similar they were to what the older Jodorowsky imagines them to be. They are etched in the aged man’s mind as mystical creatures, their idiosyncrasies both colorful and awful. As a result, they become thoroughly and absolutely human. The childhood Jodorowsky presents isn’t free of trauma or full of achievement. Instead, it carries with it the slow burning wisdom of father and son as they grow separately but in unison, letting go of trumped-up ideologies and learning to move closer in faith to the whimsical mother.

Perhaps that is the true test of childhood. Adulthood tempts all children to leave behind the fantastical for the reasonable, and that is the greatest loss of all. In The Dance of Reality, Jodorowsky paints the picture of a life in which the fantastical perseveres throughout adulthood and old age. A life that dares to be enraptured is naturally more desirable than that which cannot find a trace of its former magic.

3 thoughts on “Embracing The Magic: What “Boyhood” Forgets About The “Dance” Of Childhood”