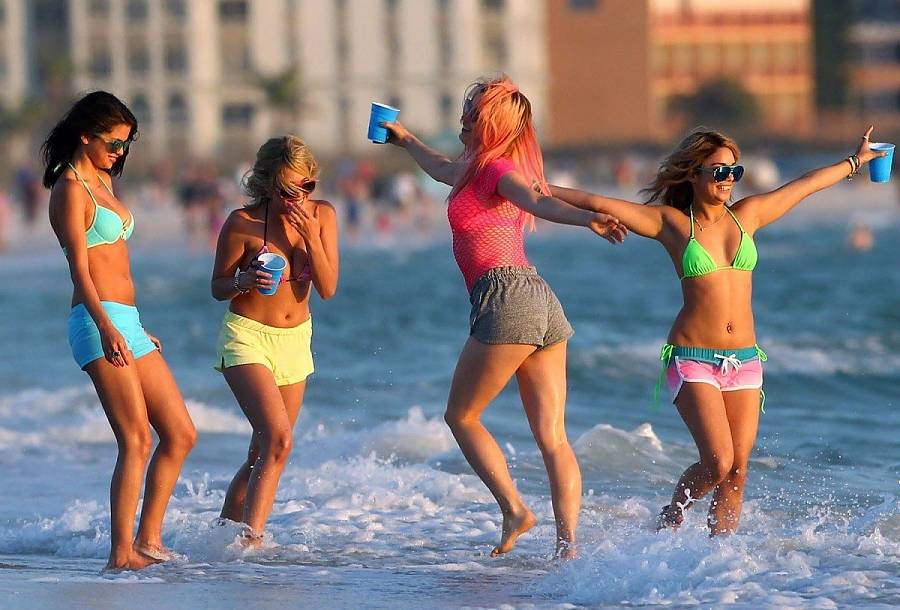 Dispatches from an Opening Night Screening of Spring Breakers

I’d already seen Spring Breakers once, at an early screening with a crowd very receptive to the latest offering from Harmony Korine. Since that first viewing I was eager to get back to a theatre to see it again. The film was stuck in my head for days. The images. The edits. The music. The vibe of the film sat in my soul and the only way to satiate my lust for its satirically depraved spirit was to watch it again.

And so I gathered myself, sister in tow, on opening night for the film here in Canada. We bought tickets to the 10:40pm screening and entered a completely packed auditorium, filled to the brim with 17-25 year-olds. I could tell immediately that this would be a fascinating audience experience; a case study of sorts on the immediate effects of Harmony Korine trolling a generation of filmgoers looking for a good time party movie.

The following are notes and reminiscences from that screening:

– The previews are playing and already the crowd is rowdy. They are clearly hoping this movie provides an escapist release.

– The movie begins. Skrillex music and slow-motion shots of gyrating bodies on a beach. Breasts fills the screen. The audience is laughing and cheering and everyone is having a great time.

– The real world enters the picture, and this slower, more delicate section of the film is already confusing people.

– “What a dumbass!” These words are used by one of the girls sitting behind me to describe Selena Gomez’s character, Faith, during scenes of her participating in a prayer group. The rest of the audience is laughing hysterically.

– The group of girls behind us will not stop jabbering, but at least they’re talking about the movie.

– People seem genuinely shocked by the scene of the girls robbing the chicken restaurant. This may be the moment that loses most of the audience. They can’t seem to figure out how seriously to take the film.

– “Oh my god, did Vanessa just say the money makes her pussy wet?”

– The girls in the film arrive at spring break. Parties everywhere. Topless girls grinding all over the place. The guy sitting next to me tells his date, “yeah, this is the shit right here!”

– The girls behind me are cheering.

– Selena Gomez, Vanessa Hudgens and Ashley Benson are in a pool. Gomez is talking about freezing this moment in time. The guy next to me says, “oh, shut the fuck up, you bitch.”

– “Is that the fat one? Ewwww,” says one of the girls behind me, referring to a scene in which Rachel Korine takes her top off.

– A party in which girls are topless on the floor, making out with each other receives various reactions. “Hot!” “Gross!” “What the fuck?”

– James Franco has just bailed the girls out of jail. “He’s so ugly in this, but still so hot.”

– “Good. Fucking go.” The gentleman next to me is clearly happy to see Selena Gomez’ character exiting the story.

– Now James Franco is showing the girls all his shit. The audience is laughing, but the same people laughing are also saying things like, “oh my god, this is so stupid. This movie is so dumb.”

– “’Oh look at me, I’m brushing my hair.’ What a terrible movie.” Clearly, the random shot of a stripper preparing in front of a mirror is sending this young girl down the row into a fit of rage.

– Horror and disgust as James Franco fellates a loaded handgun. “No! Why, James Franco?” And finally, the first person within earshot to say those words I’ve seen thrown around on Twitter all week: “This is the worst movie I’ve ever seen.”

– The montage set to Britney Spears’ ‘Everytime’ plays to huge laughs, at least two girls singing along, and one of those same girls saying, “this movie is the worst,” only to continue singing along.

– The crowd’s patience is wearing thin. Rachel Korine’s character has been shot in the arm and plenty of people are happy to see her leave. “Oh, good, it’s the fat one.”

– We’ve come now to the final scene of the film and the audience has flat out turned on the film. You can barely hear the sound of Vanessa Hudgens’ voice-over through the shouts and jeers from the crowd. “Did James Franco just die?” “What the fuck is this movie?” “Of course they’re just shooting everyone.” “Now that guy falls into the pool and, yeah, there, right into the pool.” “You see what Disney does to you?” “This is the worst movie ever.”

– The final shot. The audience can feel it. The girls behind me begin a mocking slow clap. Much of the rest of the audience joins in. “Beautiful movie,” says another girl behind me, sarcastically. “What a piece of fucking garbage.”