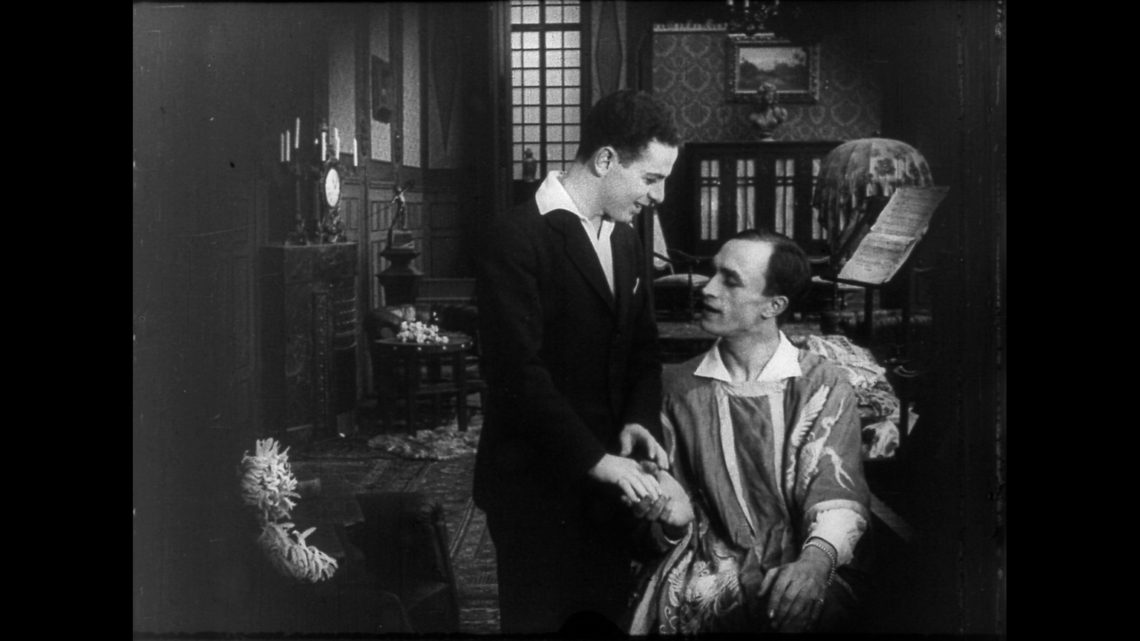 Nathanael Hood writes about the experience of watching the restoration of the German silent film about homosexuality, "Different from the Others."

That any of Different from the Others has survived at all is nothing short of miraculous. Made in the brief interim after World War I when film censorship wasn’t enforced in Germany, Richard Oswald’s 1919 film was one of the earliest movies, if not the very first, to overtly depict homosexuality. Co-written by legendary sexologist Dr. Magnus Hirschfeld, one of the first advocates for sexual minorities, the film combined deliberate melodrama and plain-spoken didacticism to create a condemnation of homophobia and a plea for tolerance and understanding. It primarily targeted Paragraph 175, the notorious provision of the German Criminal Code, which made homosexuality between men a crime. Over 1,000 German men—but not women, since women were not thought capable of feeling sexual attraction—were arrested every year for violating it. Under the Nazis, Paragraph 175 was used to arrest 100,000 innocent homosexuals, 50,000 of whom were imprisoned. But the Nazis didn’t stop there: They hunted down every surviving copy of Different from the Others and destroyed them.

Except, that is, for the approximately 40 minutes of footage that they missed. In 1927, eight years after Different from the Others was released, Hirschfeld and Oswald collaborated once more on Gesetze der Liebe, an educational film on various sexological subjects. It repurposed the aforementioned footage in its section on homosexuality. So while no copies of Different from the Others survived, one lone copy of Gesetze der Liebe did, locked away in a forgotten film vault in Ukraine until its discovery several decades later.

So yes, it’s a miracle that any of Different from the Others survived. But Outfest UCLA Legacy Project’s meticulous 6-year restoration of the recovered footage—cleaning it; re-tinting it; recreating lost subtitles; replacing missing sequences with inter-titles and production stills; and reconstructing the scientific slideshows and lectures given by Dr. Hirschfeld, who appears in the film as himself—is nothing less than a resurrection, with a 35mm print of the restoration recently screening at the 2016 New York LGBT Film Festival, or NewFest. Historians have been unable to determine the film’s original length—the best educated guess is that at least 20 minutes of footage have been permanently lost—but the new opening credits and inter-titles ballooned the screening to a comfortable 54 minutes. 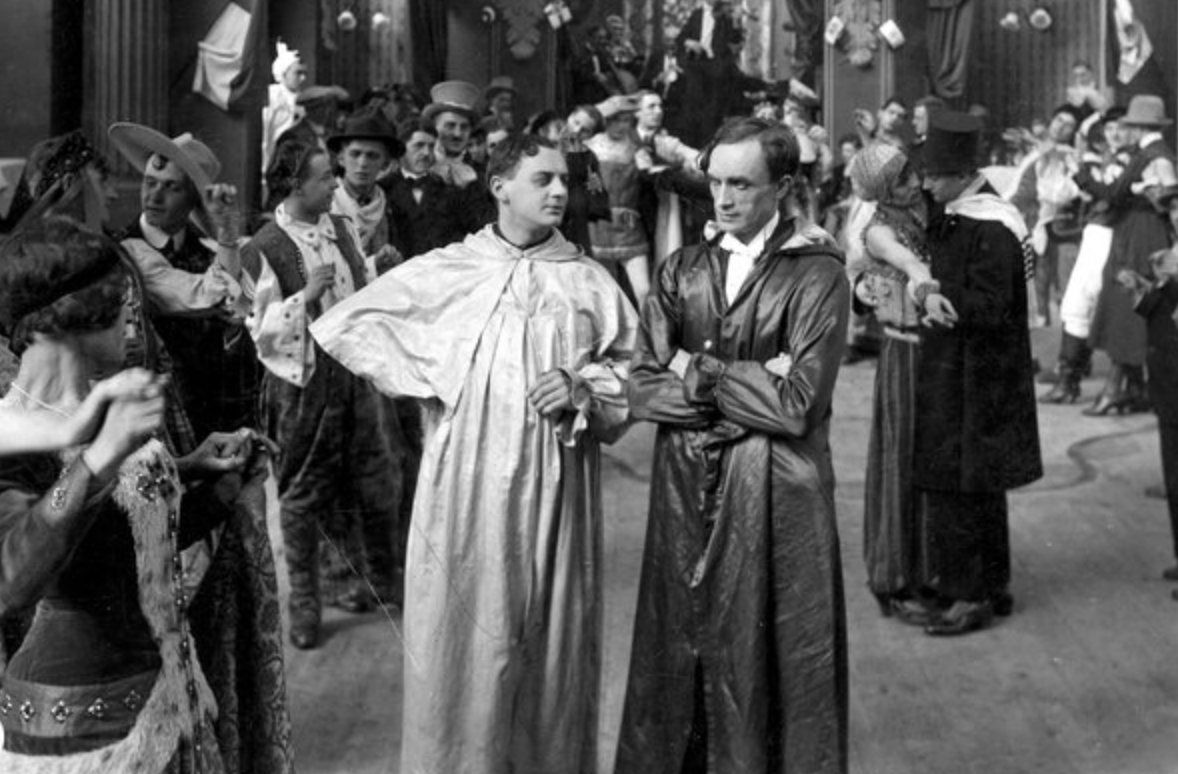 In its opening moments, we meet Paul Körner (played by closeted actor and perennial political troublemaker Conrad Veidt), a popular virtuoso violinist, and his male admirer Kurt Sivers (Fritz Schulz). After much begging, Körner takes Sivers on as a student. Sivers quickly becomes his star pupil and eventually his lover. But during a walk in the park, the two are spotted by Franz Bollek (Reinhold Schünzel), a ruthless extortionist who had previously blackmailed Körner after spotting him at a gay costume party. At first, he pays Bollek, not wanting to out himself and potentially ruin Sivers’ career and reputation. But after repeated shakedowns, Körner snaps and tells Bollek to go ahead and tell the police that he’s violated Paragraph 175—he’ll just tell the police that Bollek’s been blackmailing him for years. Bollek calls his bluff and the two are arrested. After an impassioned speech by Dr. Hirschfeld arguing against the barbarity of Paragraph 175, the jury concedes that Körner is not guilty and sentences Bollek to several years of hard labor. However, lacking the legal power to grant Körner clemency, the jury is forced to sentence him to a largely symbolic jail sentence of one week. But coupled with his ostracization from high society, his friends, and his family, the sentence is too much for him to bear. He swallows a number of pills and dies.

That summary greatly streamlines the plot, omitting several extended sequences involving Sivers’ home life, his disastrous coming-out to his family, and the doomed attractions of a young woman in love with him. But these sequences are among those permanently lost, replaced in the restoration by new intertitles. The majority of the surviving footage follows Körner in the present day. Happily, an extended flashback of Körner’s early life did survive. We see him caught kissing another male student while at boarding school, prompting his immediate expulsion. We see him attend college where he defends himself from embarrassing social rendezvous with women by diving headlong into his studies—but even then, belligerent friends still drag him to parties, where they abandon him to the mercies of ravenous college girls. Finally we see him encounter a sympathetic doctor who informs him that “Love for one of the same sex is no less pure or noble than for one of the opposite…Those that say otherwise come only from ignorance and bigotry.” But this is quickly followed by his discovery by Bollek. From there, we continue Körner’s downward spiral to suicide. 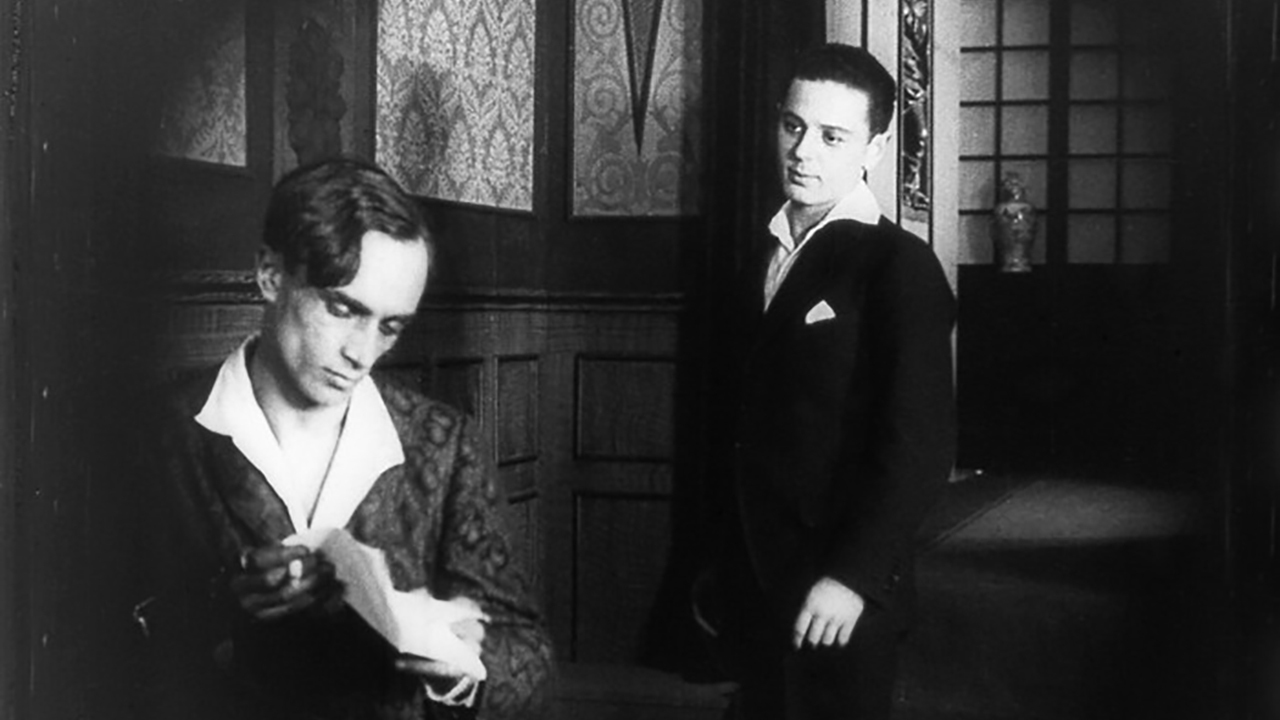 In contradistinction to the burgeoning German Expressionist movement of the time, Oswald took pains to film Different from the Others in as naturalistic a style as possible. The few overtly stylistic flourishes were omitted when he and Hirschfeld salvaged footage of the film for Gesetze der Liebe. Their loss is all the more unfortunate since they significantly frustrate modern attempts to reconcile the film within a larger stylistic historiography. One of the more fascinating segments of lost footage bookended the film: It featured a grim procession of famous historical figures persecuted for their homosexuality as imagined by Körner. A surviving production still reveals that it involved an actual parade of extras in lavish historical costumes. The other great loss was the original final shot: an anonymous hand brushing out Paragraph 175 from an open German law book. Of what survives, only Schünzel’s performance as Bollek suggests a connection to the hyper-stylization that overtook German cinema of the era. He’s practically a character plucked from a turn-of-the-century melodrama, a hodgepodge of overly dramatic gestures, highly mannered movements, and grotesque smile/grimaces. If the film had been made in the 1930s, one could easily imagine Peter Lorre being cast for the role. (Speaking of Lorre, it’s deeply ironic that future cinematic depictions of homosexuals would take cues from Schünzel’s performance here, including Lorre’s own affected turn as the maniacal, possibly homicidal Joel Cairo in John Huston’s The Maltese Falcon [1941].)

But despite its moralistic soliloquizing and didactic instruction, Different from the Others is remarkable for its unapologetic depiction of homosexual desire as something natural and beautiful. There’s nothing perfunctory or mechanical about Körner’s longings for Sivers. The film is emotionally explicit: These are two ordinary people driven not by bestial urges or uncontainable lusts, but by a deep-seated attraction and emotional need. In that sense, Different from the Others shocks with its modernity, never reducing either of its protagonists to palatable stereotypes for straight audiences. Though the ending surrenders to many tenets of melodrama—Körner’s homophobic parents are finally confronted at their son’s funeral, Sivers is saved at the last moment from committing suicide—for audiences of the time, it was a brutal illustration of an all-too-common reality. Tragically, it was a reality that would last for several more decades, as Paragraph 175 wouldn’t be officially repealed in post-unification Germany until 1994.

Following the NewFest screening of the film, a panel was held featuring Academy Award-winning filmmaker Rob Epstein, Museum of Modern Art Department of Film Collection Specialist Ashley Swinnerton, and film journalist Manuel Betancourt. The panel was moderated by film scholar Noah Isenberg. Currently, a recording of the majority of the panel has been posted on YouTube in three parts: here, here and here (go to 2:35 of the third video to hear this writer ask a question).