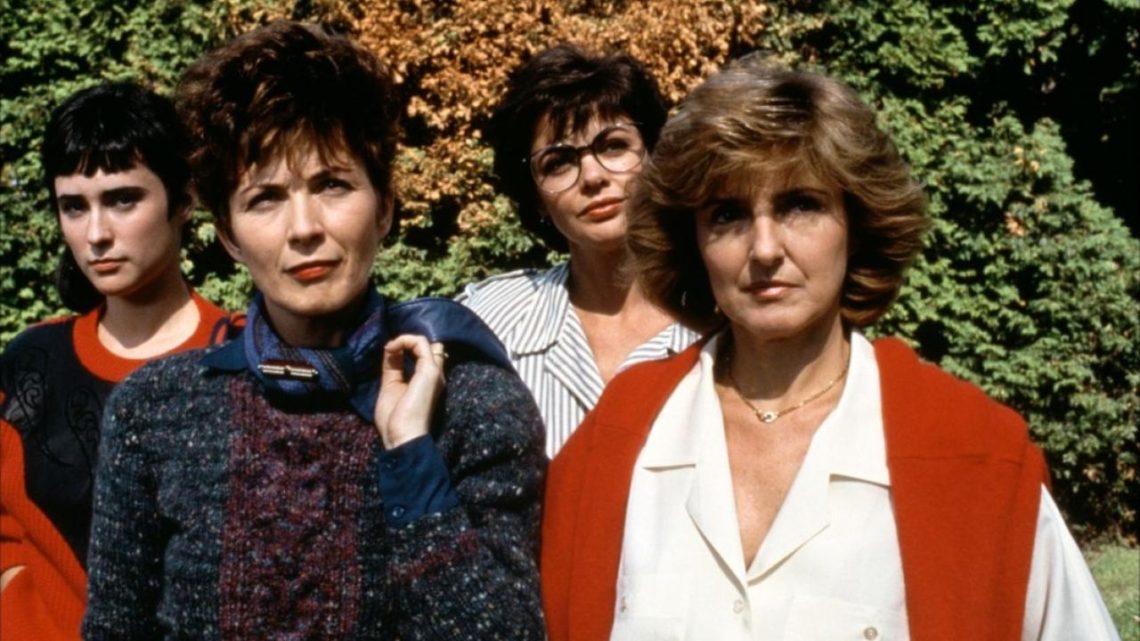 “The Decline of the American Empire” at 30

Angelo Muredda looks back at Denys Arcand's "The Decline of the American Empire" on its 30th anniversary.

Thirty years after it hoisted Denys Arcand onto his perch as Canada’s premier cultural export for cocktail-party intellectuals and casual squash enthusiasts, it’s still hard to get a bead on The Decline of the American Empire, a tart but ideologically confused salon on the interpersonal dramas of Quebecois academics in the self-interested 1980s. The title, rhymed in the equally grand pronouncements of sequels The Barbarian Invasions (2003) and Days of Darkness (2007), seems to promise either a grim sociological tome on the inevitable apocalyptic outcomes of capitalist decadence or a wide-ranging satirical treatise on the same. What Arcand delivers instead is at once more minor and more grandstanding: a philosophically muddled, socially conservative survey of the sexual misadventures and existential noodlings of a tribe of over-educated and over-sexed yuppies who share a vague sense of standing on the precipice of a new world order, worse than the last.

Arcand rigidly divides the proceedings along gendered lines, alternating between the equally disinterested locker-room and lakeside discussions of early middle-aged male and female scholars at the same Montreal university, whose banal theses on the desires and mating habits of the opposite sex find their testing ground when the groups meet in the middle for a cottage retreat. We start in the hallowed halls of academia, meeting up with big-shot historian Dominique St. Arnaud (Dominique Michel) in the middle of an interview with CBC broadcaster Diane (Louise Portal) on the topic of Dominique’s new book, ostensibly a treatise on things Arcand finds distasteful about the modern condition. “I need another five minutes,” Diane says. “Just stretch it out.” And so Dominique does, offering up the film’s putative, perhaps lightly ironized argument: that the present obsession with personal satisfaction and instant gratification at the expense of all else is a sign of a civilization on the verge of collapse. The women keep the conversation going at the gym with their posse while Arcand seemingly dives into the depths of Dominique’s footnotes to exhume Rémy (Rémy Girard) and Pierre (Pierre Curzi), a pair of smug, sexually omnivorous braggarts and historians holding court at the women’s eventual pastoral destination. Arcand then cross-cuts between the two camps’ conversations and hazily dramatized memories, revealing their mistaken ideas about one another with all the subtlety of mocking rimshots, before allowing them to meet in a barbed dinner-party catechism.

The Decline of the American Empire purports to make up in historical awareness and keen insight into the present what it lacks in narrative tension. In some respects, the film succeeds as a detached longitudinal study of how the effects of the Quiet Revolution spread through Quebec’s Francophone intelligentsia from the 1960s onward only to calcify into an equally oppressive moralism without God in the 1980s. Whatever their respective lacunae about how the opposite sex lives and loves, Dominique, Rémy, and Pierre are all products of the same cultural transformation that saw Quebec changed, through successive Liberal governments, into a more secularized, socially progressive society than under Catholic conservative leaders like Maurice Duplessis. Likely young radicals at the height of that cultural shift, Arcand’s 40-something heroes have since believably curdled into wan opportunists who drift from conquest to conquest, while the next generation, represented rather obviously by Pierre’s student and girlfriend Danielle (Geneviève Rioux), turn fetishistically to the past even as they stand to inherit the damaged future their elders have left for them. 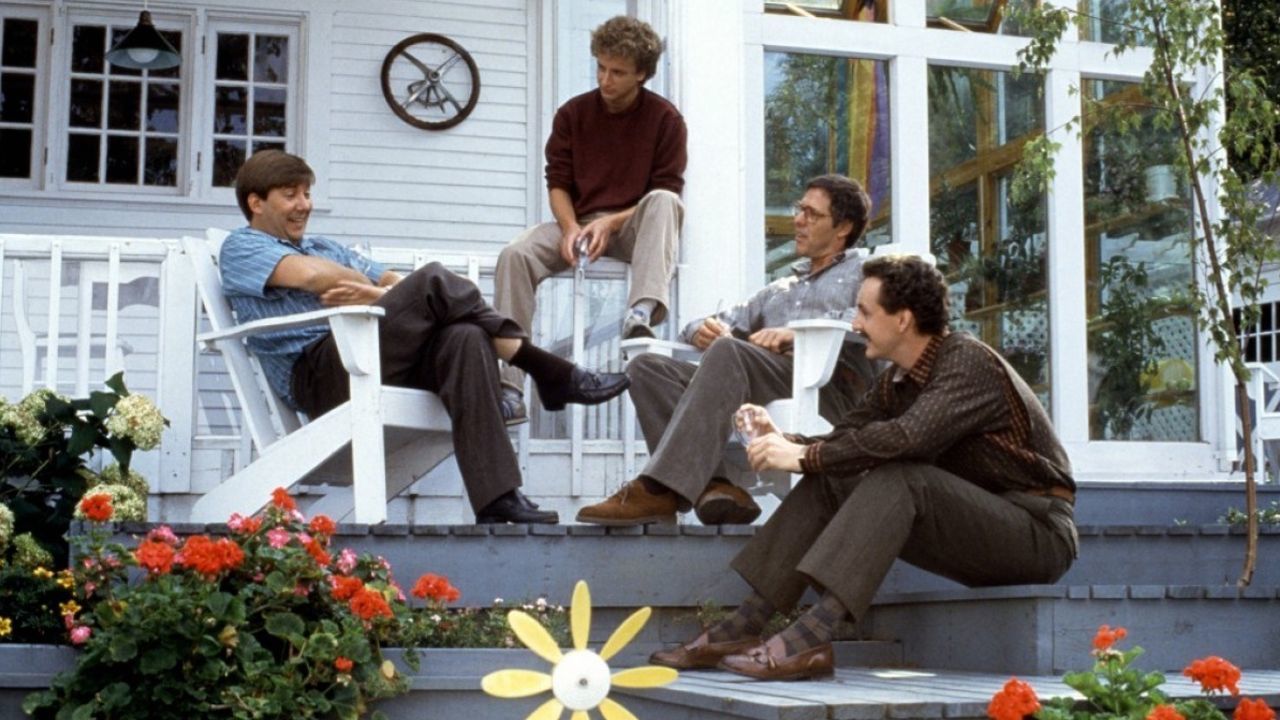 Arcand’s cynicism about the way the 1960s spirit of sexual liberation has degenerated into unchecked narcissism among champagne socialists like Dominique and Rémy (and eventually, no doubt, Danielle) is fair enough, but also telling of the film’s imperious endorsement of monogamous coupling as the last bastion of ethics in the modern age. The film particularly stumbles in its tokenistic representation of Claude (Yves Jacques), the macho men’s lone gay friend, an art historian who’s presumably on hand to add a queer spice to the group’s otherwise strictly vanilla sexual exploits. A furtive moment where Claude panics after urinating blood ostensibly humanizes a character who is otherwise just a grim embodiment of Dominique’s thesis, his impassioned speech about how he only feels alive when he is cruising all but marking him for death from the decadence the film ultimately scolds, for all its liberal pretenses.

It says a lot about Arcand’s unexamined prudishness that the lone sop to sexual diversity outside of his characterization of Claude is a flashback to Rémy waving off the services of a trans sex worker with the jovial dismissal that that’s that’s not what he “had in mind” in his search for sex before bedtime. That Claude survives to reappear in The Barbarian Invasions, where Rémy is now terminally ill, suggests an unearned subversion of the trope that gays in straight movies must die for a heterosexual community’s renewed health. That reversal is at worst insulting and at best unprepared for by a predecessor that uses Claude as a blunt instrument to critique Rémy’s own extramarital dalliances. Unable to reconcile its naughtiness with its haughty finger-wagging, its heteronormativity with its prurient appetite for outré anecdotes — where cruising and kink are reduced to stories other people tell over spirits — the film devolves into a confused, curiously retrograde elegy for the solidity of Catholic values.

In spite of these deficits, the film has retained its appeal as an example of quality Canadian filmmaking, likely because of its technical assuredness, borne from Arcand’s long nonfiction career in crafting observational documentaries for the National Film Board. If the standard line on quotidian, mostly English-Canadian cinema is that it is either eccentric — prone to weird sex and snowshoes — or hopelessly prosaic, its chief popularizers at international showcases like Cannes (at least, before the colorful, regionally situated melodramas of Xavier Dolan) have trended a third way: toward an especially austere strand of modernism. With its long tracking shots, frontal tableaux, carefully framed two-shots, and roving camera set pieces of characters warily circling each other in conversation, The Decline of the American Empire set the table for the success of later formalist, philosophically accented Canadian art-house darlings in both official languages. It’s a pity that those well-employed tricks of the trade are in service of such a confused, bloviating text. Ambivalence can be an asset, but in Arcand’s case, it’s the product of intellectual haziness rather than complexity, an inability to seriously grapple with the questions — about history and futurity, about secularization and morality, about sex’s proximity to both life and death — it dashes off as carelessly as a swig of wine.