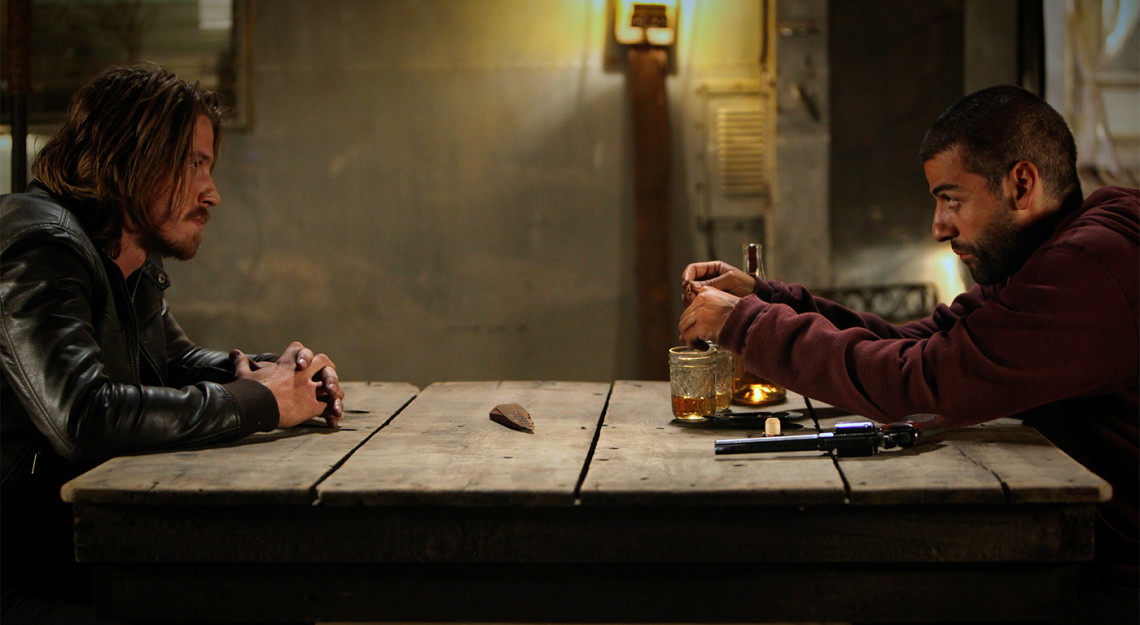 This Week’s Cinema: “Aferim!” and “Mojave”

Our critic takes a look at some of this week's new movies.

I. Consciously difficult material often marks the quality of a supposedly “serious” film. Look at the plots of some of the Best Picture nominees for this year’s Academy Awards: Bridge of Spies focuses on the intense negotiations of a prisoner exchange between the United States and the USSR; Spotlight follows the Boston Globe’s investigation into the widespread sexual abuse scandals in the Catholic Church; Room centers upon a young mother and her son struggling to escape captivity and adjust to the real world. Regardless of their quality, these are prestige pictures that demand attention from Oscar voters and audiences alike because of their weighty content. They’re “serious” because their material dictates it.

But as anyone who spends enough time at the multiplex knows, there are plenty of films that wear the mask of importance even if their actual content falls short of it, as if adopting a serious tone will inherently elevate inadequate material. At the same time, there are also films that engage with significant subject matter but don’t try to constantly beat us over the head with its significance. Two new releases this week follow these respective patterns: William Monahan’s laughably pretentious Mojave assumes a self-serious tone that renders the whole film a joke, while Radu Jude’s tragicomic Romanian drama Aferim! allows its despairing worldview to grow organically out of its road narrative.

II. Mojave communicates exactly what kind of film it is in its first 10 minutes. Thomas, a rank cliché of a “depressed artist” played by a maddeningly blank Garrett Hedlund, escapes his pampered life in Los Angeles and heads for the Mojave Desert presumably to “find himself.” Once he’s there, he acts like a parody of a reckless madman, provoking howling animals in the distance to attack him and purposely crashing his vehicle so he can travel on foot (“good,” he smugly comments on the wreckage). Not long after this ludicrous display of bravado, Thomas meets Jack (Oscar Isaac), a silly caricature of a menacing drifter; think Dennis Hopper’s crazed photojournalist in Apocalypse Now if he had escaped the jungle to spout pseudo-literary bullshit so terrible it would drive Colonel Kurtz insane quicker than Vietnam. Naturally, a fight ensues between them and they become enemies. By the end, only one will be left standing.

Everything from Mojave’s exaggerated performances to Monahan’s blunt direction reeks of irritating self-seriousness, but its wellspring lies in the script. Though it’s filled with some terrible dialogue (choice lines include, “To be or not to be? It always comes to that,” and “When you’re working, everything’s cobwebs. People are cobwebs!”), the real problem is the heavy-handed way it tries to equalize the actions of a detached, self-involved artist and those of a serial killer. Monahan argues that Artist and Murderer adopt a similar delusion of importance that perpetually justifies their destructive actions, isolating them from the morals that govern most people’s lives. When Thomas accidentally kills a cop in the desert and tries to pin the crime on Isaac’s drifter because he was a witness, he’s confident that he can get away with covering up the incident. His programmed, PR-style reaction evokes the numerous celebrities and high-profile individuals who routinely abuse their power and suffer no consequence. How different really, Monahan asks, is Thomas—by all accounts a run-of-the-mill asshole—from a crazy drifter who quotes George Bernard Shaw and has remorselessly killed seven people in the desert?

Though it’s possible a director could craft a good film out of this idea, Monahan’s leaden dramatization renders the entire film inert and idiotic. Despite ostensibly being a cat-and-mouse crime film, Mojave has no sense of tension; it just meanders along in a sun-drenched haze acting like it all means something. Whenever Mojave isn’t indulging in long, morose sequences of Thomas staring vacantly and mumbling—you know, to demonstrate his intensity and/or existential longing—it’s indulging in ill-conceived, horrifically paced dialogue scenes between Hedlund and Isaac, in which the latter rambles in nonsensical monologues about Big Concepts (Art, Religion, Shakespeare, what have you) only punctuated by the word, “brother.” This is a movie that literalizes such painfully obvious subtext by having Jack ask Thomas, “Which one of us is a sociopath?” and asking the audience to take that question very seriously.

Monahan so thoroughly pervades Mojave with an oppressive atmosphere of Seriousness even when it’s being completely ridiculous (the nadir being Mark Wahlberg’s cameo as a film producer in which he yells profanity-laced gibberish in a bathrobe all for a stupid plot point) that it can’t help but fall apart. It tries to be a half-hearted critique of Hollywood pomposity by acknowledging Thomas’ “bad guy” bona fides, and yet still makes a last ditch attempt at sympathy anyway. It wants to engage with sobering ideas, like the dangers of fame and how it detaches a man from reality, but it never takes because the film itself is so divorced from reality. Any and all attempts at self-awareness surrounding its own absurdity fail miserably. Mojave so badly wants to be taken seriously but doesn’t have the intelligence, emotional or otherwise. “Look at where the world is because of solitary dudes going mental in the desert,” Jack says at one point, acutely unaware that that world he’s describing also bore Mojave. 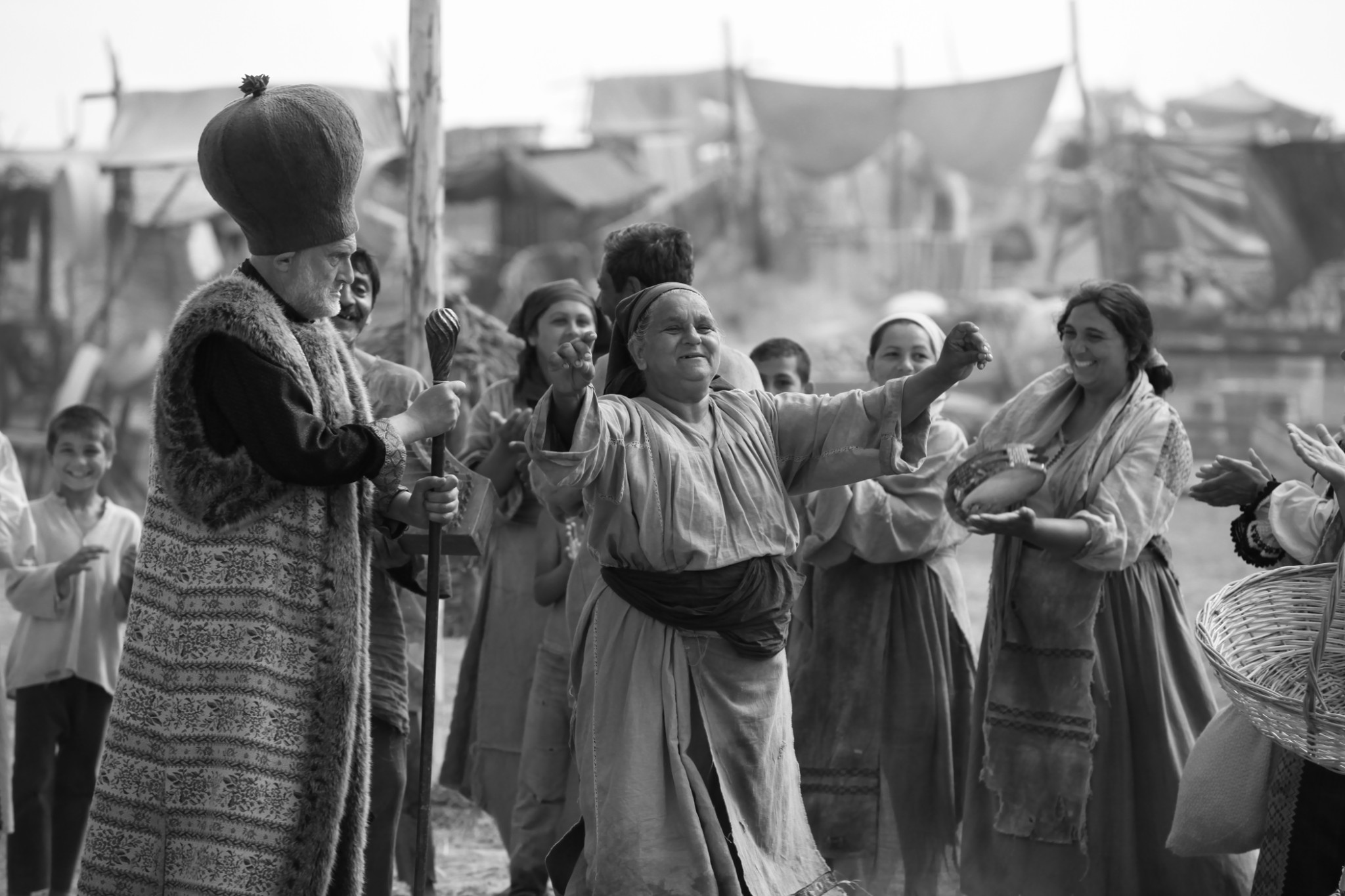 III. While Mojave tries and fails to earn its own self-importance, Aferim! never tries to foreground its own significance and is ultimately much more affecting. Reminiscent of Hal Ashby’s The Last Detail, Aferim! follows Costandin (Teodor Corban) and Ionita (Mihai Comănoiu) as they traverse 19th-century Wallachia to find Carfin (Toma Cuzin), an escaped gypsy slave who had an affair with the nobleman’s wife, so they can bring him to “justice.” Once they find him, they discover that he wasn’t entirely at fault and connect with his humanity, so much so that they lightly question their mission’s purpose. The word “lightly” is crucial, as Aferim! presents a world where everyone from slaves to nobleman, Jews to Christians, Romanians to Hungarians all inherently accept the limits of their existence. That Carfin would even slightly succeed in appealing to his captors’ compassion suggests what little worth personal agency has in this time and place.

Though shot quickly on a small budget, Aferim! doesn’t adopt the minimalist style characteristic of the Romanian New Wave movement, but instead showcases its scale and scope to powerful effect. Jude employs widescreen, black-and-white photography not just to illustrate the loneliness of the open landscape, but also the distance between the country’s social groups and how their mutual distrust and prejudice drives them farther apart. Costandin and Ionita meet many people on their odyssey who harbor ill will towards anyone outside their social class, indicating that such hatred is passed from one generation to the next. When they meet a priest on the side of the road who coarsely rants about the Jews, it feels inborn out of fear and circumstance. Developed from historical documents and old books, Aferim! depicts the power structures in late-feudal Europe with knowing wit and a keen awareness of the present, how certain hundred years old beliefs carry over into a newly democratic Romanian society.

Though questions of individual morality and the relationship between the past and present are clearly on Jude’s mind, their seamless integration into the main narrative effectively strengthens these ideas. Just as Jack Nicholson and Otis Young’s characters in The Last Detail express guilt over escorting a young sailor to a harsh prison sentence, the father-son team wonders aloud if they shouldn’t just let Carfin go instead of delivering him to what will certainly be a horrific fate. Though their winding journey gives them plenty of opportunities, Costandin and Ionita never sway from their mission, adopting a pessimistic sense of humor about it all. However, it’s not an easy sit for either of them when it comes to actually facing the consequences of their actions, forcing them to briefly reckon with the individual cost of their labor. Like a certain other Western making the rounds in American theaters, Jude wants its audience to reckon with uncomfortable ideas as well, such as how much of the past we can truly leave behind, and how little we have truly evolved. Aferim! demonstrates that permeating a narrative with a message is better than trusting self-seriousness to deliver it for you.