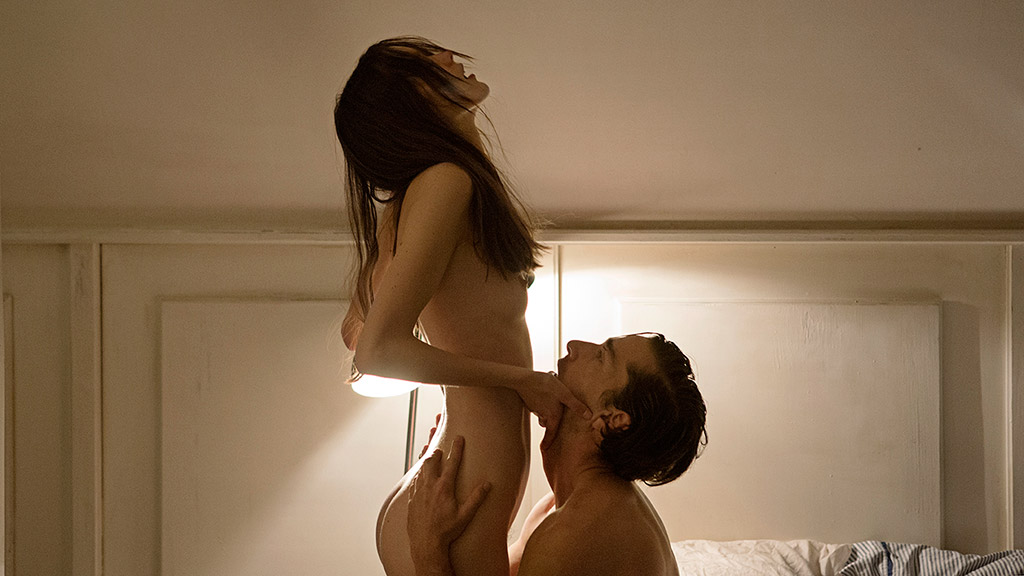 No surprise that David Fincher’s adaptation of Gillian Flynn’s controversial best-selling novel Gone Girl became a big hit upon its release. One aspect of the film that generated unexpected chatter, however, was Ben Affleck’s penis. Days (weeks?) after critics had seen the film, many of them were still arguing about whether or not the star’s member was ever actually on-screen, to the point where Kyle Buchanan wrote a step-by-step how-to guide to see it.

This mere half-second flash of male nudity, and the attendant talk it inspired, is sadly emblematic of Hollywood’s relationship with gendered nudity. Actresses are so widely expected to physically bare all that many feel a need to resort to adding “no nudity” clauses to their contracts, to a degree that men generally are not—and even then, they can be shamed for that choice. Male nudity, on the other hand, rarely goes beyond the occasional butt shot, and of the handful of American films in the last decade to show full-frontal male nudity, it’s almost always for comedic effect (Borat, Grown Ups, Forgetting Sarah Marshall, Jackass 3D). It’s funny to see a dick because it’s so rare and outrageous, but a naked woman posed for maximum titillation is practically a criterion for commercial entertainment—not only in mainstream films like 300: Rise of an Empire, Sin City: A Dame to Kill For and Hercules, but (perhaps even more so) on cable television in series like “Game of Thrones” and “Boardwalk Empire.”

To catch a tiny glimpse of Ben Affleck’s penis in Gone Girl, then, is to be treated to something that actors typically are not expected to give in the same way that actresses are. It was the rare moment in a Hollywood film that invited a female and queer male gaze. This (very) brief respite from the infrequency of full-frontal male nudity is all the more notable because of how casual, rather than comedic, it is (an impression confirmed by looking at Jezebel’s 50 best dick shots, which includes many clothed men and many comic representations). And that is what is irksome about this double standard when it comes to nudity in Hollywood movies: For some reason, the sight of a dick is not immediately sexualized in Hollywood, but the sight of a bare female form is inherently sexualized. 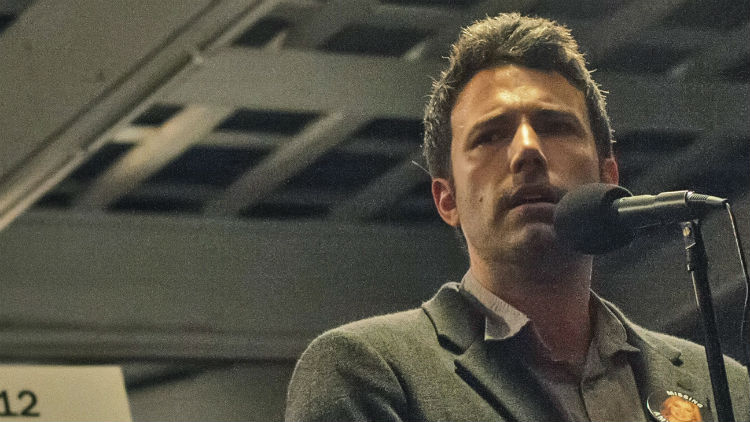 Even when a filmmaker attempts to subvert that heterosexual male gaze—as Jonathan Glazer tried to do with Scarlett Johansson in Under the Skin—such attempts are successful only up to a point, as evidenced by the fact that the scene of Johansson examining her body in a mirror ended up appearing on countless porn/scummy websites. Because of deeply held patriarchal notions that have conditioned us to see only sexual objects in images of nude females, it can be quite difficult to find effective ways to reject them. Certainly, mainstream American cinema has historically been uninterested in that kind of subversion. Pre-Code Hollywood films like the early Tarzan movies were hardly shy about sexualizing the female body; the Hays Code may have made such blatant objectification more difficult in the 1940s and ’50s, but the dissolution of the Code in the ’60s opened the titillating floodgates once again. By the time we reach the modern day, there are many lists online counting down the “best gratuitous nude scenes”: Species, Fast Times at Ridgemont High, Swordfish, and of course, Showgirls.

As ever, though, this kind of sexism was much less of an issue this year in film outside of Hollywood. Lars von Trier’s Nymphomaniac, of course, was not shy about showing all bodies, and it still caused all kinds of chaos when it premiered stateside. Alain Guiraudie’s Stranger by the Lake directly invited a queer male gaze, showing a much higher comfort with male nudity than in Hollywood; even better, the graphic sex also served the characterizations, showing how each man is driven by his lust to wade into some dark psychological waters. Unabashed eroticism of the kind displayed in Guiraudie’s film and in Abdellatif Kechiche’s Blue is the Warmest Color is apparently something that Hollywood films are afraid to embrace. It’s all about morals, or something.

Hollywood’s conservative streak when it comes to sexuality has become even clearer with two recent news items, both of which have been received with an encouraging amount of ire: the lack of full-frontal male nudity in 50 Shades of Grey, and the lack of any sex scenes in The Imitation Game. The latter—a biopic of Alan Turing (Benedict Cumberbatch), the brilliant mathematician who was ultimately criminally persecuted for his homosexuality—has received less attention, but has proven to be just as controversial. 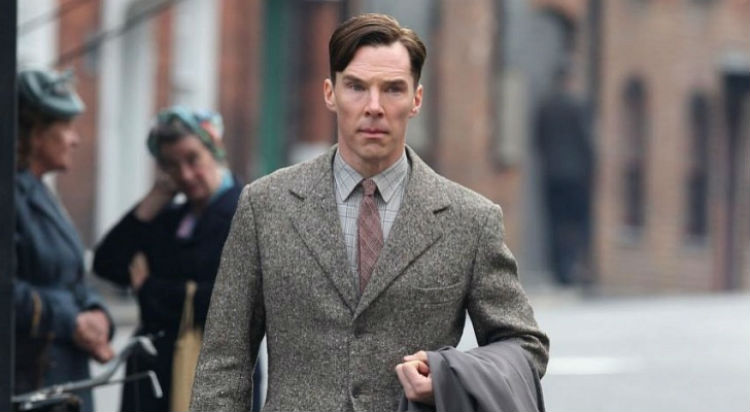 The film spans decades of Turing’s life, with a particular focus on his extraordinary code-breaking work during World War II—but according to reviews and reports, never once does he express his sexuality onscreen (there are no sex scenes, and he never touches another man), thereby relegating this crucial aspect of his personal life to a mere footnote. Cumberbatch and director Morten Tyldum have defended the choice: Tyldum by claiming the lack of sex scenes is “historically accurate” (whatever that means), Cumberbatch by arguing that their inclusion would mean the loss of “subtle storytelling.” But the fire was again stirred earlier this month when Jonathan Dean of the Sunday Times reported having seen an early version of the script that did contain a gay sex scene with both characters “tugging off each other’s clothes, hungry for sex.”

The Imitation Game has been hailed by some as a potential Best Picture frontrunner. I don’t think it’s unreasonable to assume that the removal of that scene was an intentional move so that (older) viewers won’t really need to think about the character’s homosexuality while watching the inspiring and tragic story, or have to be confronted with the spectacle of two naked male bodies having sex. Instead of taking the queer male (or female) gaze into account, the film sanitizes a person’s life for mass consumption the way Dallas Buyers Club ironed out Ron Woodruff’s ambiguities for the sake of a more heroic character arc. 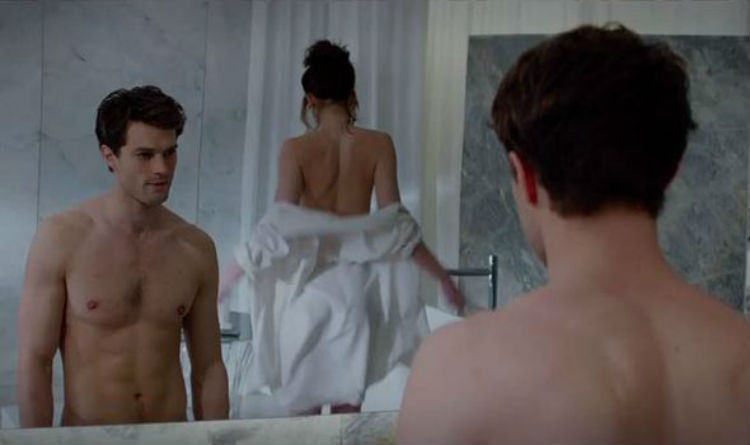 Far more attention was lavished on the announcement that there would be no full-frontal male nudity in 50 Shades of Grey. This came about because Jamie Dornan, who plays Christian Grey, signed a contract to that effect: “There were contracts in place stating that viewers wouldn’t see my, um, my todger.” This struck many as odd, considering this film, as was the case with E.L. James’s original book, is about characters having lots of sex. As with The Imitation Game, the point of toning down some of the more graphic parts of the book, including cutting down on full male nudity, appears to be partly about not “alienating” audiences; Dornan himself has said, “You want to appeal to as wide an audience as possible without grossing them out.”

But what if Dakota Johnson, who plays Anastasia Steele, had made a similar request for her contract? They simply would have found someone else, because while a male actor can get away with such a refusal in this industry, a female actor cannot, at least not without fear of destroying one’s career. Considering the level of outcry that resulted from this announcement, one can’t help but wonder why filmmakers still choose to accept this sexist double standard. Instead, here is yet another example of Hollywood putting a female body on display for men to scrutinize, because the male gaze is supposedly the only one worth catering to—this despite the fact that the book was particularly popular among women.

Not that I’m advocating a world in which men become subjects of dehumanization as much as women have been since cinema began. That’s why the solution to fixing this double standard is two-pronged: have male nudity become just as normalized as female nudity, and start to treat both with more respect. This is up to both filmmakers—who are responsible for the kinds of representations of these bodies that we get shown—and us, as we need to control our lust and take into account what these representations mean. Many feminists, queer activists and general cinephiles have been demanding this kind of equal treatment in film for some time. This balance is only the first step. It’s not as simple as just giving us more dicks, but it’s a start.

8 thoughts on “Sex(ist): On Cinematic Nudity”