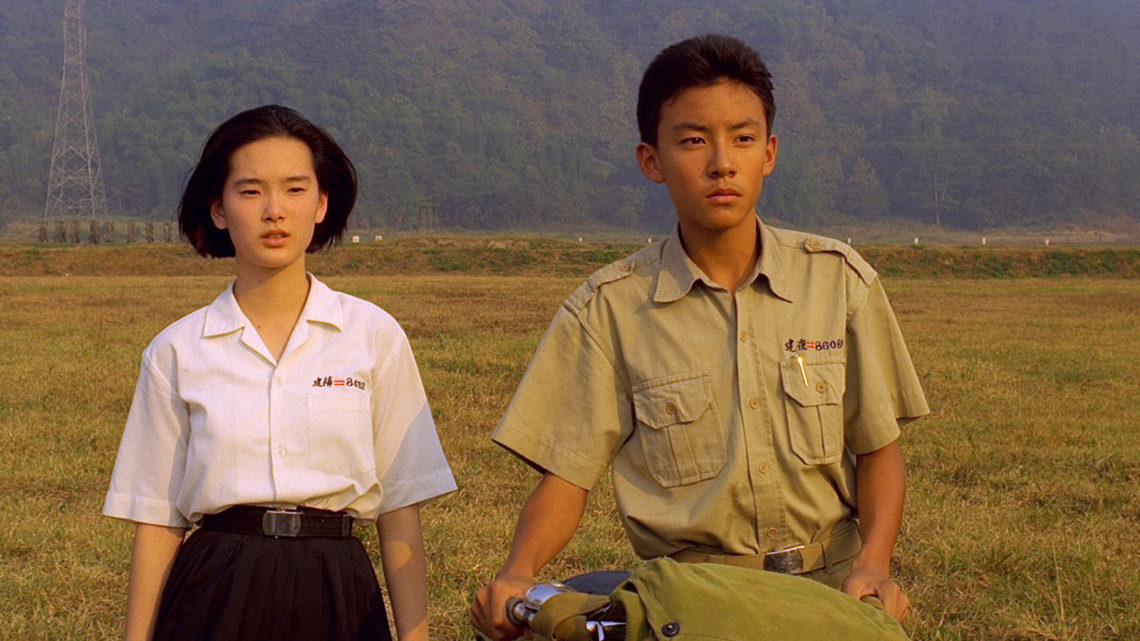 On its 25th anniversary, Sean Gilman looks back at the iconic Asian drama "A Brighter Summer Day."

Edward Yang’s A Brighter Summer Day was released earlier this year by the Criterion Collection; a home video event years in the making, rumors of its impending inclusion in the canonical collection (as part of Criterion’s partnership with the World Cinema Foundation) have been swirling since as far back as the fall of 2012. Based on a celebrated and controversial crime from 1960 that Yang recalled from his childhood in Taipei, the film is a four-hour dissection of a teenage boy, a family, and a community in flux. The film is a landmark of the Taiwanese New Cinema, the movement led most famously but by no means exclusively by Yang and Hou Hsiao-hsien, and one of a series of masterpieces by young filmmakers from the Chinese periphery in the late 1980s and early 1990s that attempt to grapple with the generational legacy of the post-World War II civil war that sent millions of Chinese into exile in Taiwan, Hong Kong, and beyond.

Cheng Chen, in his film debut, stars as Xiao S’ir, a 14-year-old bookworm with worsening eyesight who has fallen in with the local gang after being transferred into a night school. He becomes enamored of the gang-leader’s girlfriend, the mysterious Ming who may be carrying on affairs with any number of other boys around town. S’ir’s gang is at odds with another gang over a local concert, which each side wants to control. Their brawls escalate from fist-fights to murder to a massacre in the midst of a typhoon. At the same time, S’ir’s father, played by Chang Chen’s own father, the veteran actor Chang Kuo-chu, is being manipulated into some shady business by an old friend who ostensibly has the government connections necessary to get his son transferred back into day school and his wife (Yang regular Elaine Jin) properly credentialed for work (she lost her papers when the family fled Communist China in 1949). Yang takes his time building up the world around S’ir, establishing a dozen or so of his friends and rivals, most notably a short kid named Cat who loves singing Elvis in his unbroken voice (the film’s title comes from a mistaken transcription of a line from The King’s “Are You Lonesome Tonight?”), a rich kid named Ma who protects S’ir and has ready access to a variety of weapons (including a handgun and samurai sword), and Sly, the gang member hoping to supplant the gang’s absent leader, Honey, who has gone south and joined the Navy but who returns at the film’s midpoint in a performance worthy of Orson Welles’s famous “Mr. Wu” anecdote. 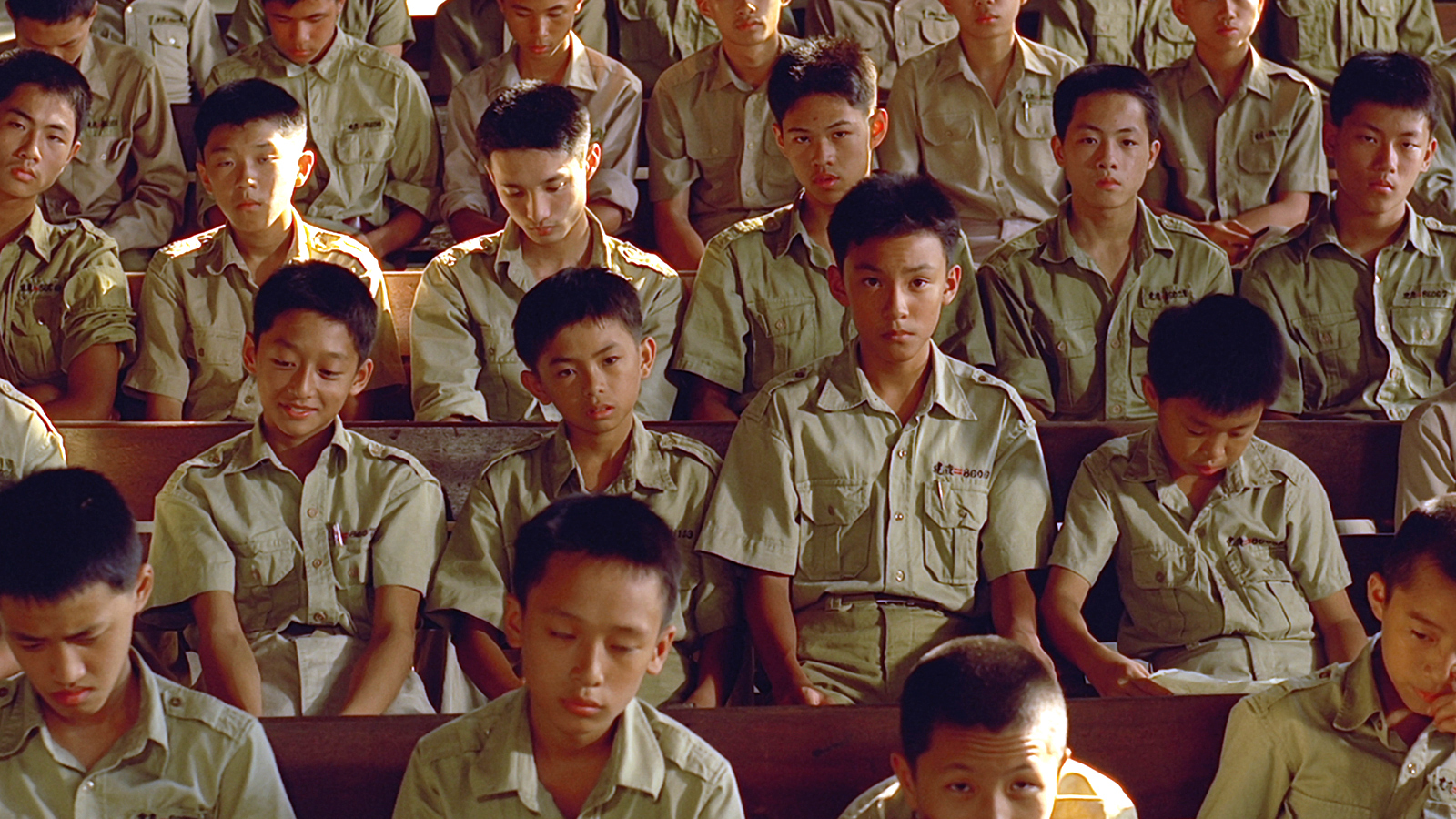 The film is densely packed with metaphors for the different cultural influences that are pulling together and ripping apart Taiwanese society. The boys use basketballs and baseball bats as weapons, but are in love with American pop music. The people all live in Japanese-style houses, left over from 50 years of colonization dating from the end of the nineteenth century (“We fought a war for eight years against the Japanese only to now live in their houses”). These houses contain hidden secrets, including: Ma’s samurai sword, a long knife found by Cat that fatefully finds its way into S’ir’s hands, and a photograph of a Japanese girl—possibly a vanished soldier’s sweetheart—which becomes one of S’ir’s totems. A radio and watch purchased by the parents in better times on the Mainland are cavalierly misused by their children: the one dismantled and never quite put back together correctly, the other repeatedly stolen, pawned, and secretly returned. In the opening scene, S’ir snatches a flashlight from a desk in a nearby movie studio, which he carries around for most of the film before abandoning it for a knife that doesn’t fit in his belt as snugly as the flashlight. The motif of flashing lights appears in several key moments in the film: the opening scene features an electric lightbulb being turned on, the appearance of a girl (possibly Ming) during a school fight, the headlight flash that accompanies an important character’s death, and the intermittent power at the rival gang’s lair. Such objects-as-symbols might have been overly determined contrivances, but the world Yang painstakingly creates allows them to accrue meaning organically, with the weight of a flood.

Using a deliberate pace featuring long shots and long takes—a style that would become known, somewhat inaccurately, as Asian Minimalism, reaching its expressive extreme in the work of Tsai Ming-liang, Apichatpong Weerasethakul and the early films of Jia Zhangke—Yang attempts to explore as much of the possible context around S’ir as possible, seeking an explanation for his horrible crime in ever-widening circles of circumstance. In some ways this portrayal is reminiscent of this year’s OJ: Made in America, but told with an austere visual flair unheard of in the world of television documentary. The camera usually (though not exclusively) maintains a middle-to-long distance from the characters, as if attempting to take in as much of their surroundings as possible. The shots are frequently framed by walls or trees, receding deep into the frame (as opposed to the horizontal arrangements common in Hou’s films) and creating what Emilie Yueh-yu Yeh and Darrell William Davis call in their study Taiwan Film Directors a kind of “Tunnel Vision,” where our expansive view of the characters only reveals to us the constrictions of their world. In the same way, Yang often elides key details from the plot, as if deliberately hiding pieces of the puzzle, forcing the audience to actively take part in the creation of the narrative. Sometimes these elisions are subjective (we along with S’ir can’t properly identify the girl in the school fight at the opening), sometimes they are of extraneous information (we don’t really need to know what S’ir’s father’s friend wants him to do, we just know it’s shady). But there’s always a sense of mystery about the murder central to the film, one that cannot be totally solved or truly understood.

Narrative absences like this are a hallmark of the Taiwanese New Cinema, as well the Hong Kong New Wave, a contemporary film movement which had an underrated influence on the young Taiwanese directors. Yang and Hou and their companions (Wu Nien-jen, Chu T’ien-wen, Mark Lee Ping-bin, Sylvia Chang, etc) are usually seen, in Western critical studies, as following in the tradition of landmark European movements and filmmakers: Italian Neo-Realism, the French New Wave, Michelangelo Antonioni, Robert Bresson, along with Japanese director Yasujiro Ozu. Yet the Taiwanese directors themselves rarely credit the influence of European arthouse cinema. Yang has cited the German New Wave as an inspiration (he decided to change careers in the late 1970s when, while working for a computer research lab in Seattle, he happened to catch Werner Herzog’s Aguirre: the Wrath of God in a local arthouse theatre), as well as the Hong Kong New Wave. The Hong Kong filmmakers were a handful of young directors who moved from television into feature filmmaking, and broke through a couple of years before the Taiwanese did. Directors like Tsui Hark, Ann Hui, Patrick Tam and Yim Ho made low-budget, independent and politically committed films about Hong Kong’s aimless youth (The Happening, Dangerous Encounters: First Kind), the legacy of the war in Vietnam (The Story of Woo Viet, Boat People), and the general unease of life in the early 1980s (Nomad). These directors were quickly followed by a slightly younger second wave, led by Stanley Kwan, Peter Chan and Wong Kar-wai (in the same way that Yang and Hou were followed by Tsai and Ang Lee). Among other greats in a series of films released between 1985 and 1993—including Hou’s A Time to Live, A Time to Die and Hui’s Song of the Exile—A Brighter Summer Day represents attempts by Yang’s generation to negotiate with their parents’ legacy, growing up in exile from the homeland, disconnected from their own past. It’s probably a coincidence that the Taiwanese filmmakers, raised under 40 years of Martial Law, developed an austere, oblique style, while the Hong Kong directors, coming of age in one of history’s most extreme experiments in laissez-faire capitalism, developed a free-wheeling, genre-confounding, expressively esoteric style. 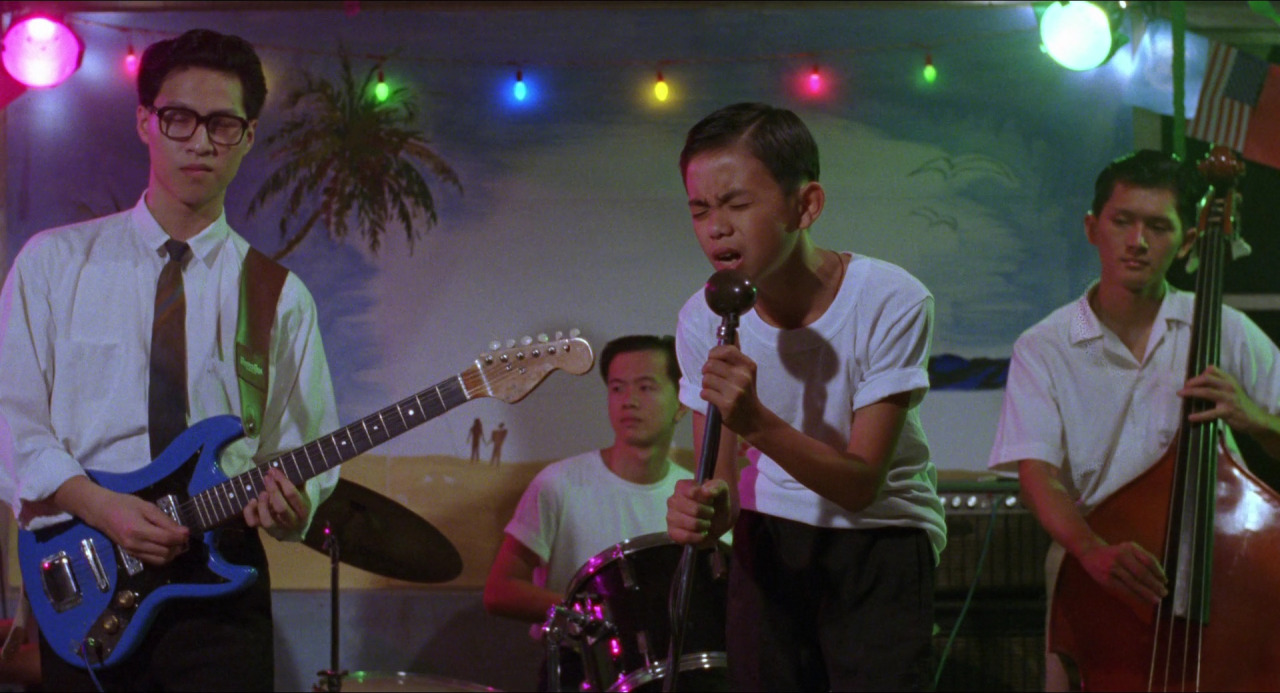 In this backward-looking respect, A Brighter Summer Day is an anomaly for Yang. It marks the midpoint of his career, both temporally (halfway into his 18-year-spanning career in feature films) and numerically (the fourth of seven completed features). It’s the only one of his films to be set in the past: unlike Hou, Yang was a director of Taipei’s present, tracing intricate narratives about young, middle-class workers and their devastations, sourced to a large degree in their inability to adapt their learned cultural traditions to the new norms of modern capitalism. In his three 1980s features, this kind of conflict is the subject of dark drama, usually ending in arbitrary and despairing death. His post-A Brighter Summer Day work is lighter and warmer in tone, though no less marked by violence. Mahjong, his greatest film, depicts modern gangster youths, who, after all their humiliations and violent outbursts against an emasculating and increasingly exploitative world, find a grace note of romanticism and hope for the future. Yi yi updates the family dynamic to the turn of the century, with each member of Wu Nien-jen’s household wandering off on their own quests for fulfillment. There’s still a horrible inexplicable crime, at its heart, but rather than obsessively focus on its origins, on the network of causes and conditions that might explain its occurrence, in Yi yi the crime is a tangent, a thing that happens to the neighbors, the lives of whom we catch glimpses of but for the most part don’t even notice.

Yi yi was the only one of Yang’s films to receive a proper theatrical release in the US, which had as much to do with Yang’s own distrust and disillusionment with film companies as the shortcomings of international distributors. For the most part, the New Cinema was conceived to counter the influence of Hong Kong and American films in the local market. Aside from a couple of hits (the omnibus The Sandwich Man, Hou’s 1989 A City of Sadness), this was a near total failure. The New Cinema as a formal movement was essentially defunct by 1987, and Yang’s films from A Brighter Summer Day and onward were independent productions. This has made it extraordinarily difficult to find his movies on home video. Not helping the cause is the general paucity of Chinese arthouse films being released in high quality in the West. Wong Kar-wai’s movies are ubiquitous of course, as are many of Tsui Hark’s more popular works, though pointedly none of his punk-anarchist early films. Of the New Wave work of the directors listed above, almost none exist in acceptable condition on American home video. If they circulate at all, it’s usually on ancient imported VHS or VCD ports, fuzzy, cropped and haphazardly subtitled. So far this year Criterion, has released two Taiwanese films: A Brighter Summer Day, and King Hu’s A Touch of Zen (with his Dragon Gate Inn presumably coming soon as well). This has doubled their number of Chinese-language films, joining Yi yi and In the Mood for Love (John Woo’s The Killer and Hard-Boiled and Wong’s Chungking Express are technically in the Collection but are all out of print). Not coincidentally, given Criterion’s influence on American cinephile culture, those are the only two Chinese-language films that tend to show up on Best of the Century-type lists. It took twenty-five years for A Brighter Summer Day to have a chance to join the popular canon. Here’s hoping its release is only the first step in the wider recognition of what has been, over the last 40 years, the most vital cinema in the world.