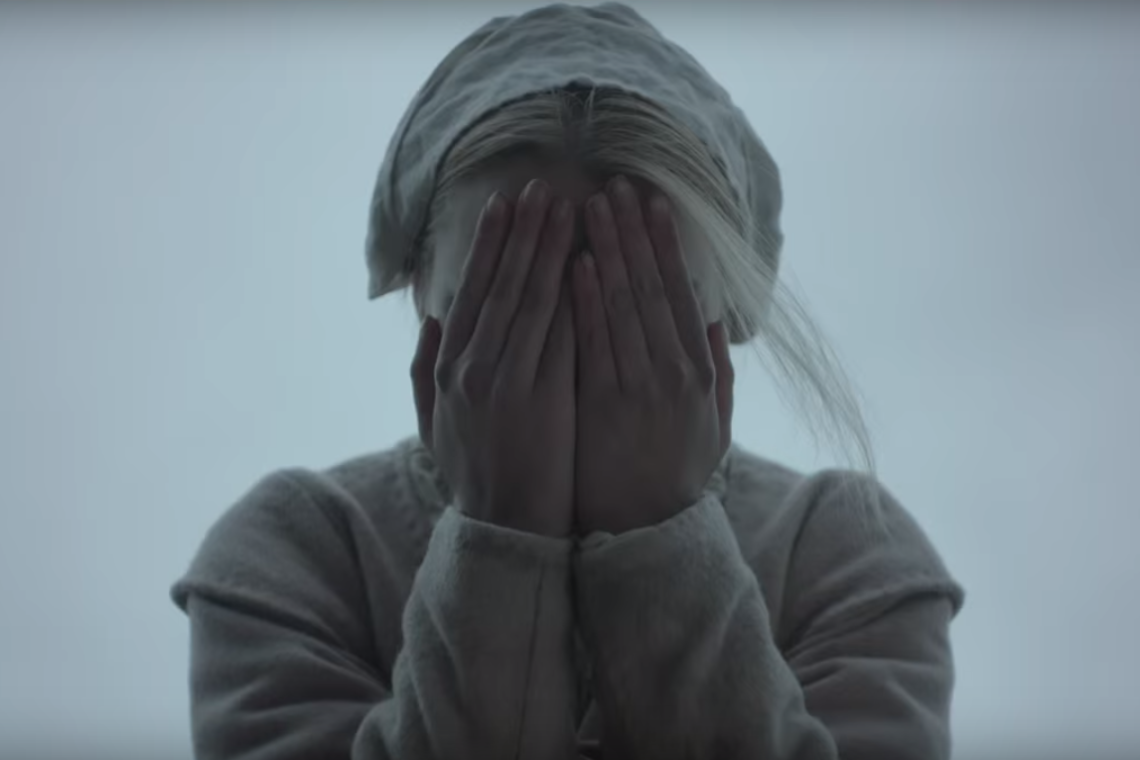 An Aural Reading of “The Witch”

Olivia Collette writes about the aural choices in the new horror film "The Witch."

A settler family is banished from their village. The father is accused of being too religious. Exiled with him are his wife, Katherine, his teenage daughter Thomasin, his pre-teen son Caleb, and his twin six-year-olds Mercy and Jonas. They find a desolate land near a forest, and make it their home. Before long, a fifth child, Samuel, is born, and shortly after, he mysteriously disappears.

Was it a witch or a wolf? Was it Satan or Nature? How would you reconcile these questions if you believed that each was conceivable?

That’s the basic premise of The Witch, which follows this family as its situation grows more devastating. Because its plot is that simple, it gives director Robert Eggers room to play with the film’s atmosphere, and sow fear in ways that require little dialogue. His use of sound in establishing the film’s pervasive uneasy feeling is especially masterful. 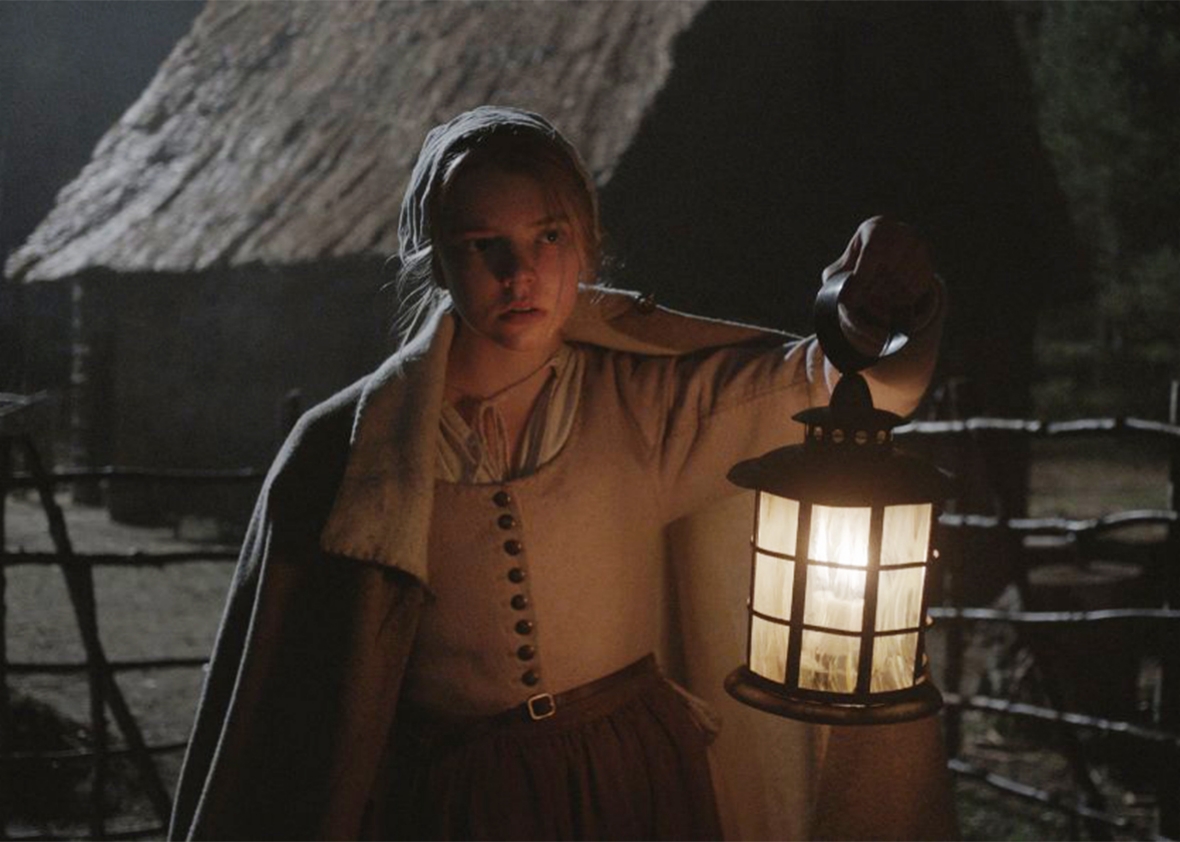 Hear It to Believe It

The Witch is a movie full of cues that help us perceive its universe. The first cue is visual, because the film begins quite evidently in 17th-century colonial America. This means we’ll have immediate expectations about how the notion of a witch will play into this story. But we’re not going into this experience with 17th-century superstitions. Our 21st-century knowledge of the 1692 Salem Witch Trials allows us to entertain the possibility that the eponymous entity will be nothing more than a false accusation made by petrified Puritans, because witches, then, as now, are not real.

Then the first unholy event occurs: baby Sam disappears, which is instantly followed by images of an elderly lady grinding flesh and smearing the bloody paste on her nude body. Despite what we see, it’s still possible to believe that the flesh is not the baby’s, and that this woman is not a witch; our 21st-century mindset probably isn’t inclined to jump to that conclusion on visual evidence alone.

But this scene is nevertheless alarming, and what creates that dread is the musical cue. What we hear—the only thing we hear—is a single chanting voice. Eventually, it’s joined by other voices singing a dissonant, eerie minor-second chord. (Most audiences will recognize that minor-second progression as the same that the Jaws theme used to announce its predator.)

A bass note chimes in, played possibly by a cello. The bass string and treble chanting sustain their notes throughout the piece. A percussive sound is eventually added, either mirroring the grinding of the flesh, or a clapped rhythm to the crone’s naked dance. When the song becomes more troubling, the voices are singing something like a melody. The minor-second chord persists throughout the piece, but two soprano voices start to screech wildly before the song suddenly stops.

Whether or not this is the sound of what’s happening onscreen, it’s at least the impression of it. It’s unsettling, all the more so because our brains inherently feel uncomfortable hearing seemingly unharmonious minor-second chords. Plus, during my viewing at least, this piece came through the speakers quite loudly. Assuming this is Eggers’s intention, it means the music envelops the moment, making it nearly impossible to ignore.

It’s not looking good for baby Sam. The music tells us that much, while guiding us to the possibility that a real witch is now terrorizing the family. 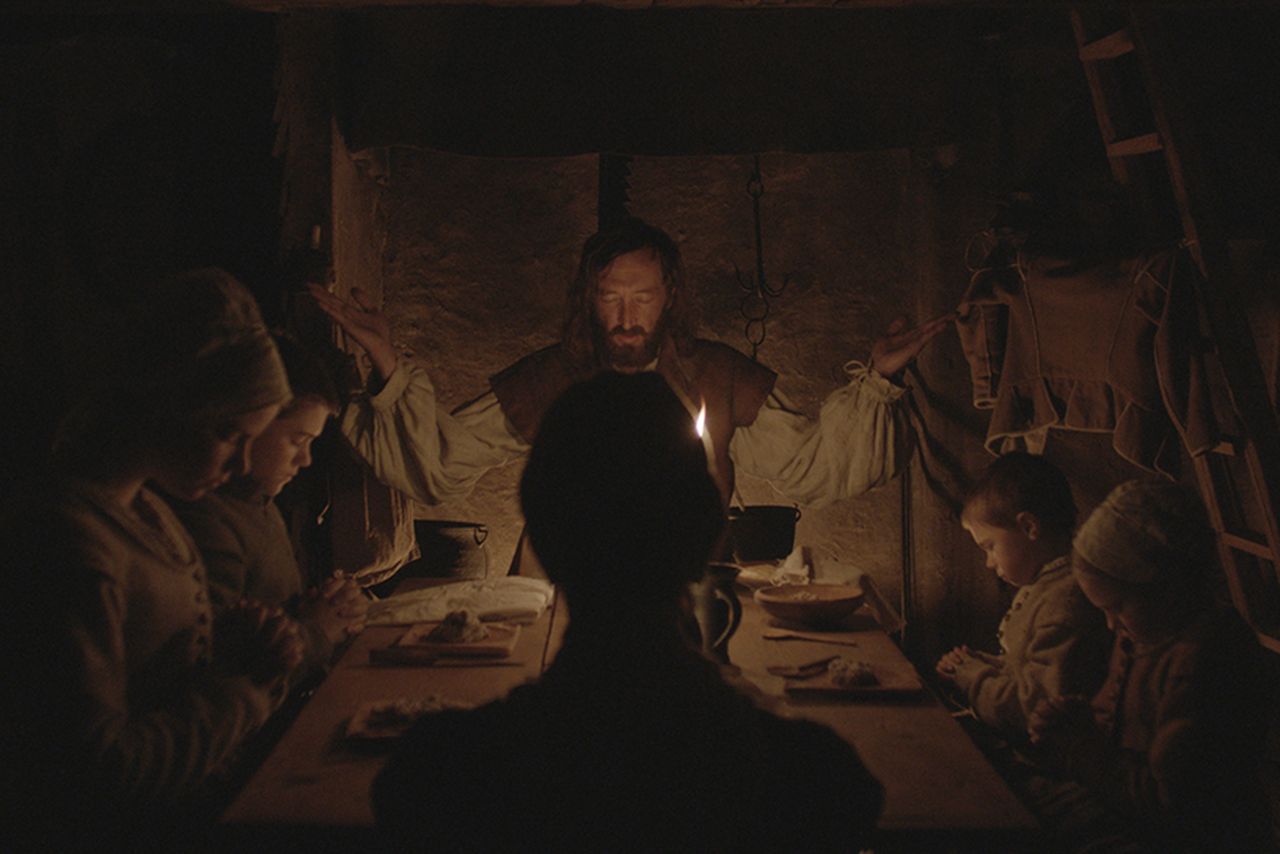 What The Music Says

On a few occasions, the movie’s music usurps any other soundtrack. For instance, when young Caleb encounters a red-hooded witch in the forest, you hear composer Mark Korven’s strained score, which seems to combine strings, a bit of percussion, and some voice. But you don’t hear Caleb cracking twigs on the ground with each step, much less what the picture shows to be his heavy breathing as he approaches the seductive enchantress.

There’s also an intriguing tension within that piece. It begins with more strings, possibly hearkening to the kinds of instruments that would have been available to Caleb, his family, and the villagers they used to live with. Towards the middle of the piece, however, discordant, ethereal voices join in, and as they increase in volume and heft, the strings begin to disappear until only the frenetic voices are left.

The scene ends with the witch having kissed Caleb. Pervasive chanting, and the absence of strings, tells us that whatever she was up to, she won. The piece itself ends with a percussive sound that does more than mark the end of a scene, suggesting a door closing and being locked. Knowing that this is the last moment Caleb will lead a normal, healthy life, the piece’s brief, final moment is all the more disconcerting.

Throughout the movie, Korven doesn’t rely on a full orchestra to set the tone. His arrangement is sparse, lacking the horns, woodwinds, and common percussion instruments that you’d expect to hear in a John Williams score. In Korven’s compositions, the strings characterize the family, voices carol in the witches’ realm, and any percussive sounds tend to mimic hard surfaces in the story, like glass shattering, logs falling, hammering on wood, and so forth. When a broken William admits he stole his wife’s precious silver cup, the strings lament with him. When Thomasin joins the witches, they sing a violent chorus around the fire.

String instruments like the violin are said to produce a sound that’s closest to the human voice. So it’s especially interesting that when the family first discovers the land they plan to inhabit post-banishment, the worrisome piece is entirely played with strings, but manages to simulate haunting, voice-like qualities. It’s as though the music warns us that the two worlds—the family’s and the witches’—are about to clash. It’s also a reminder that witches are still very much human—so much so that they’d rather use their own voices instead of affecting civility with manufactured instruments. Strings may sound like voices, but they’re not the real thing. 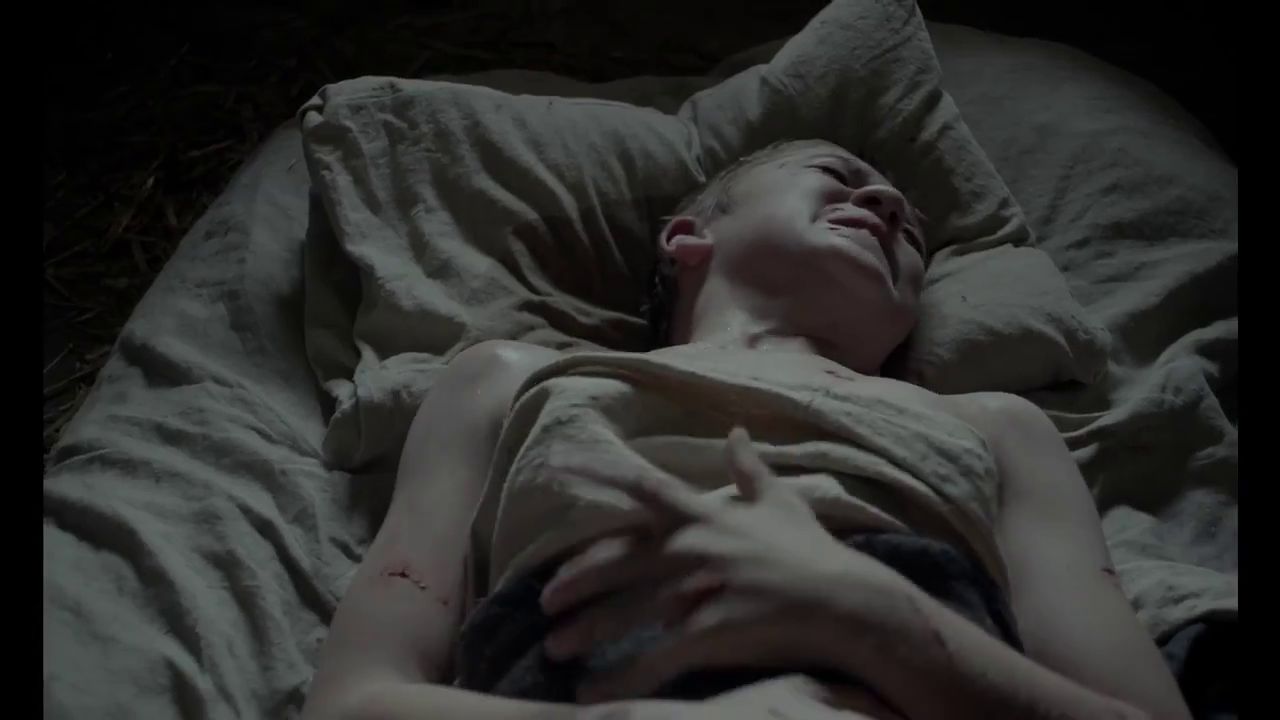 Silence and The Void

Even when it’s not there, sound is still important in The Witch. I saw the film with my significant other, who works in sound production, and for him, the movie’s most salient parts were the ones marked by absolute silence.

Even with the film’s many loud musical moments, The Witch is largely quiet. It’s part of how it so successfully invokes fear in its audience. The silence is constantly letting us know just how utterly secluded the family is—far from any known civilization, with no one around them having any interest in saving them. The family’s isolation is so palpable that when you hear something, it’s jarring. Only the goat Black Phillip’s heavy breaths in the shed punctuate the silence, which is even more imposing with the knowledge that there really is nothing else to hear. So even when the generally disturbing soundtrack doesn’t play, we can’t relax. 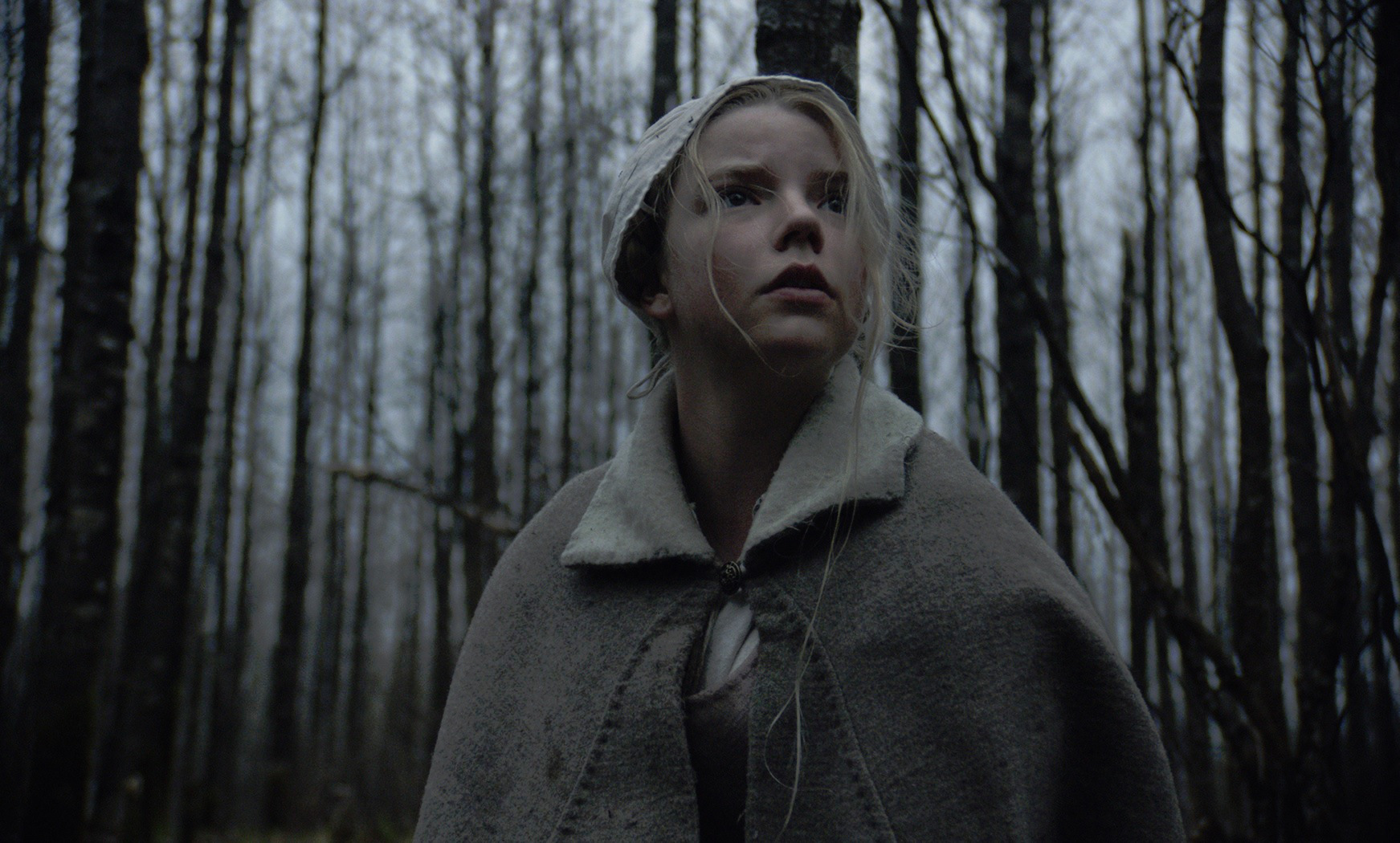 The Witch doesn’t spend much time explaining things to its audience. It shows us the things that matter, and if we don’t believe or get them, that’s on us.

The dialogue is scant, and barely advances the plot. When William confesses to stealing the cup, it doesn’t change anything about what’s going on at that moment and what’ll happen after. All told, it’s fairly inconsequential.

But when William does speak, his distinct voice is like a soft, rumbling earth. The casting of Ralph Ineson in that role can’t be an accident. Not only is his deep voice remarkable in itself, it’s also in significant contrast to the other characters’.

Consider who else is in his life: his wife, his teen daughter, his pre-adolescent son, his twin six-year-olds, and an infant son. Every one of these characters has a high-pitched voice, either on account of being female or a child.

William is also the only character who doesn’t lose his cool. His world is crumbling through attrition; he’s losing every person he holds dear one by one; he can’t provide for his family because he’s a terrible farmer and hunter; and his faith is not helping him one bit against the forces that are determined to wreak havoc on his life. But his voice never suggests uninhibited rage, not even when Black Phillip gores him in the torso.

Everyone else gets to scream and express their emotions vocally. Katherine grieves for her baby openly and snaps at her children when they annoy her. Thomasin gets to cry and yell at Jonas and Mercy to shut up. Caleb’s life ends with an impassioned prayer. The twins seem to only open their mouths to shriek or to repeat the most irritating and shrill children’s songs.

William doesn’t do any of that. Maybe it’s because he feels he can’t; or perhaps he really couldn’t if he tried. But what matters is that he doesn’t, and for the most part, he gives the impression that he might just make it through the horror, if only because he’s at least willing to feign stability.

But he doesn’t. Nobody survives but young women willing to become witches, which is exactly the kind of woman Thomasin becomes.

When she makes that decision, we finally hear the Devil’s voice, which Jonas and Mercy claimed to hear from Black Phillip. It’s fascinating that it turns out to be a whisper. So really, it’s a non-voice—or, you could even say, a genderless voice—and one that’s also disembodied, to an extent. It demonstrates just how powerful the Devil is—so cool and commanding, it doesn’t need to technically speak at all. It’s so skilled; it can be heard no matter what shape it takes.

If the sounds of The Witch tell us anything, in that tranquil forest, where raucous women and a hushed Devil reign, it’s that the family didn’t stand a chance.