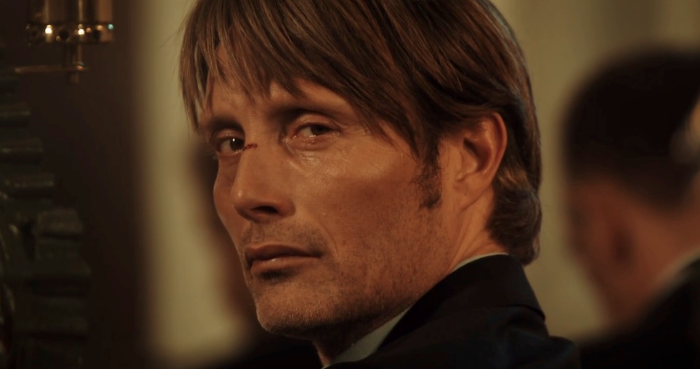 The Hunt is Tobias Lindholm’s second production with Thomas Vinterberg – their previous collaboration was Submarino. The talented screenwriter doesn’t restrain himself to screenwriting though. His second feature, A Hijacking, had its international premiere last year in Venice and received very good reviews.

In my discussion with Lindholm he tells me why the concept of a witch-hunt was so crucial and fascinating for the film, how fatherhood changes one’s point of view, why danish men are passive… and how toxic mosquitos have inspired him while writing this script.

What was your goal when creating the script for The Hunt?

There is a lot of research behind the story, investigation of cases like this one. At the same time for me, as a writer, the most important thing was the mechanics of a witch-hunt, that we could observe from all sides and in all aspects. We’re rooted in realism, I don’t think there’s anything in the story that’s completely unrealistic and could never happen. But of course we went for the most dramatic material. I was never really interested in the reason for why Lucas was hunted. For me it was about building the story around a certain engine, scheme. It was very important to say this guy IS innocent. It’s not a story about whether it happened or not.

So what’s it about?

Of course these things do happen and it’s terrible. But this is about an innocent guy and how we, the happiest country in the world, Denmark, can easily be so uncivilized and turn against our own friends. Of course it’s made in a realistic way so that we can understand each character. I understand them, their desperation.

You stress the realistic aspect – but the way the school psychologist behaves doesn’t seem very professional. I think these days someone could go to jail for such behavior.

That’s actually the scary part of doing the research. It has happened like that before. We have read files that can support such scene. But, on the other hand, we were never interested in a typical police story, where a guy has to go to jail and survive there for some time. We wanted to keep him out. To do that, we had to get into the case before the police gets involved.

But also, if you look at it from a greater perspective, she (the psychologist) is afraid that she isn’t right, that her gut-feeling is not correct, so she calls a friend. Which is also very unprofessional… We are pushing the buttons here. But we needed to keep him out of jail, therefore there must have been someone who behaved wrong and let the “virus” spread across the town.

Klara, the girl who accuses Lucas of improper behavior, is like a little femme fatale, a trigger for the whole story development.

We always knew that she’s very special. She’s not like other girls her age. She’s a loner. Probably a little more grown as well. In some cases she can speak like an adult and still be a child. This was something that we found interesting. We tried to show her and her family almost as if she’s a guest in this world, she’s never at home. She can be believable and observe grown-ups around, quote them…

She defies the stereotypical thinking of children as pure and innocent. She’s the mastermind here and it’s scary…

…It is. And at the same time she regrets it and quite fast tries to take it back. Then she realizes she gets attention from grown ups by sustaining this version.

Yes. Also, as a child it seems you don’t really remember what did and what didn’t happen. You can easily get in doubt. But what’s interesting [in the story] is that it’s this particular girl and this particular man. So that’s why we gave her characteristics. This is one thing but then the way she plays it, the little girl [Annika Wedderkopp], is just amazing, we could never hope for something like that and I can’t take responsibility for it. I think she adds 50% to the character that we didn’t have in the script.

Where did the idea of witch-hunt come from exactly?

We did Submarino together with Thomas and we knew we wanted to work together again. That story was happening in the city and we thought it would be beautiful to get outside, to the forest, that we both love. Deer-hunting, the first part, is in my opinion one of the most brilliant things ever done. The whole idea of a group of men turning into enemies…

Also Thomas had received some papers from psychiatrists after “Festen”. He hadn’t looked at them for a while, but then one day he called be, because he managed to read them.

What made that particular moment so convenient for you to write this particular script?

I’ve became a father around the time of Submarino, so suddenly I knew the paranoia of a parent, [this feeling] that somebody is hurting my child. If somebody came to me, and I have a 2,5-year-old son, and said: “your 10-year old daughter is being treated badly at school” I’d be like: “OK, it’s just the school part [that matches the description] but there’s something about it, so I’ll have a look at workers in the daycare. This is poison, it’s like a virus. I couldn’t imagine anything worse [that such situation] so that was intriguing. I also believe this is a very hard story to tell. For me it was a matter of balance: never let the virus spread to the audience. If the audience at any point thinks that maybe he did it the story would become pointless.

Wouldn’t it be interesting to let the audience join this spectacle with all their prejudices and fears?

Definitely. But it’s not a story of whether he did it or not. It’s a story about that he didn’t do it. That’s the basics of the witch-hunt story. To me it was very important not to twist and turn it, mislead the audience. For me, as a screenwriter, that’s boring. I like to stick to one thing and just play the cards. First thing to say is: “this guy is innocent” and just take the rest from there.

So, the whole idea grew from this one thing Thomas had in mind. Then we started talking about what is the worst thing that can happen to a parent. If it was in the US in the fifties, it would be about communists. So, what is the worst thing you can say about a person in Denmark? And calling someone a pedophile is the worst thing I can imagine. What would make me want to kill somebody? Probably if someone tried to hurt my child. We wanted to understand everybody in this small village, so we needed the audience to be like “oh, I’d do the same thing”. If the film was about someone beating his wife, so what? Not that it’s acceptable, but…

This idea of an innocent man being persecuted sounds very Hitchcockian. Did you have any particular film references that you were drawing from?

Yes, of course. We’ve seen those movies, we’ve talked about them are were fascinated by them. What I thought about the most was… I can’t recall the name, I’ll come back to it when I remember. But I saw an American B-film from the late seventies, about a mosquito that flew into a plane in South America, landed in New York and then everybody just turned into monsters, the virus has spread. That movie fascinated me because it was so precise. It goes from this guy to that guy and suddenly you have a whole city eating each other and going “grrraaaaahhhh”. And this one, innocent guy, trying to run away… The idea of building a drama upon that same mechanism was, for me, the whole engine. Also, the witch-hunt is kind of a genre itself in the world of film with its screenwriting and storytelling. So for me to do that for the first time, to crack that nut, was fascinating.

I think keeping the audience away from being involved allowed the film to become a sort of a mirror for them. To look at it and reflect on what would we do, if it happened to us.

Exactly, and that was the point. We knew from the very beginning that he was innocent, so we tried to figure out what is it they think he’d done. We read a lot of stories like that, but what’s important, we never researched ones where the people were found guilty. We tried to find the mechanism of how this is working. The fascinating – and, at the same time, worst – thing is that it’s always children who are hurt the most. Yes, Lucas’ life is ruined, but he can move on. Klara will never [be able to] move out of this situation. This will involve her forever, she’ll always be “this girl”. And it will stick to her family. She has been placed -or placed herself – in it, and she’s the victim here.

Why is Lucas so passive, never fighting back, just waiting?

Well, basically, we always want characters to learn something. So we need to give them a problem, right? [laughs] And then, for me, he’s also a typical danish man. In my generation, or the one before, there were not that many men, they were working. My father was very occupied by himself, so I was raised by women. That probably made me more passive. I never fought with my father. I was 21 when I started boxing, because i felt like i needed to do something. And, when I look at my friends when we’re out for a drink, we’re always sitting there almost afraid our girlfriends will call and yell at us. Come on! It’s kind of weak! And not good for anybody. So we wanted to give Lucas the same problem: he can’t set his own limits.

Exactly. So it’s only one time in the film, when he says to Theo that it didn’t happen. He never mentions it again. Because he is not guilty and he knows it. Maybe this is why this one scene when he confronts the butcher in the supermarket is so strong. When he’s passive we hope for the audience to react. And he’s the only one who can do something. He need s to confront them or move! He’s stuck. He need to move. But the story would end if he did, so…

During the press screening the audience cheered when he confronts the butcher. How does it make you feel?

I don’t think he’s a hero when he does it. It’s a terrible scene, scary, but I also really like it. It’s not a positive climax. For me it was just a proof that people are on the story. They react with the character. They’ve been waiting so long for something new to happen. And when he finally goes back and tries to take his destiny into his own hands, it’s a relief.

A version of this interview has been previously published in a polish film magazine KINO.