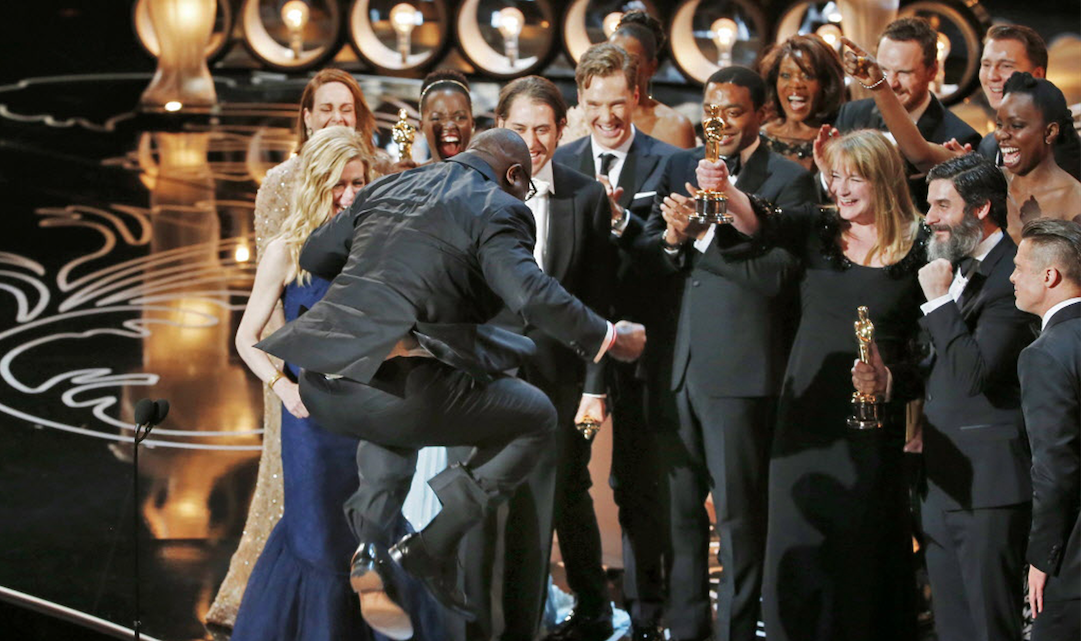 “12 Years A Slave” Big Winner at the 86th Academy Awards

Some cynical pundits (yours truly included) believed 12 Years a Slave to be too grim to have a realistic shot in Best Picture, where it faced in Gravity a likable and high-grossing blockbuster with real artistic credibility, and with Lupita Nyong’o likely to run into the quirky buzz-saw that is Jennifer Lawrence, it seemed to be an evening in which the historical drama would come up with, best case scenario, Adapted Screenplay and a below-the-line award or two. The Academy, however, proved cynics wrong and rewarded McQueen’s film accordingly.

Gravity shares with Star Wars the record for most Oscar wins without a Best Picture victory. Jean-Marc Vallee’s Dallas Buyers Club shared with the Best Picture winner a tally of three Oscars, including Best Actor and Supporting Actor for Matthew McConaughey and Jared Leto, respectively. Baz Luhrmann’s The Great Gatsby took home two awards for production design and costume design, as even folks who hated the film (yours truly included) could say, “Well, it doesn’t feel remotely like the book I know and love, but gosh, it sure does look pretty!”

Special mention must also go to Frozen, not only for its victory in the Best Animated Feature category, but also for its Best Original Song win for Robert Lopez, who now holds one of the coveted EGOTs, the acronym for winning an Emmy, Grammy, Oscar, and Tony over the course of one’s career. Lopez is the youngest person ever to win the quadruple-honor, and anyone who has seen Avenue Q or The Book of Mormon on Broadway, not to mention Frozen, shouldn’t be surprised to see so lofty an achievement at so young an age. One mustn’t overlook Kristen Anderson-Lopez, Robert Lopez’s wife and co-writer of “Let it Go,” who herself is a gifted musician (the Off-Broadway a cappella musical In Transit is worth seeking out, if the music is available out there on the internet).

Ellen DeGeneres proved to be a remarkably affable host yet again, perhaps lacking the bite that some audience members crave in an awards show emcee, but bringing to the table her quick wit and immense likability that make her such a popular talk show host. Her opening monologue fell flat in spots, as jokes about rain in Los Angeles, June Squibb’s age, and the stereotypical troubled pasts of industry folk all felt somewhat tired. However, she shone where other hosts usually stumble: the intervals between awards. Interactive gags with the audience occasionally feel canned and hacky, but Ellen brings such a light hand to the table that these moments made her evening. A running gag involving pizzas for the starving actors and the most retweeted selfie of all time were easy-going, unforced gags that humanized the ceremony.

Overall, while predictably lengthy, the Oscars were quite enjoyable. Few of the awards themselves were surprises, but the return of the performances of the song nominees was welcome, the In Memoriam segment was thankfully without applause, and we even got some instant-classic Oscar ceremony gaffes (John Travolta’s butchering of Idina Menzel’s name is an all-timer, to be watched on Vine in an endless loop for hours). Plus, there were no songs about the actress’s boobs, so when the bar is set so low, it’s not terribly high for Ellen to hurdle.

As with all award ceremonies, one can’t expect one’s preferences to all win awards (or, usually, ever be nominated), so it’s easy to thank heaven for small favors when it comes to the actual winners. 12 Years A Slave, while not my personal choice, is a feel-good victor; it’s the artful execution of a serious topic, with top-notch dialogue, indelible imagery, and some shattering moments. Gravity is worthy of every technical achievement award in the book, Frozen is as charming a Disney musical as we’ve seen the last fifteen years, and even Matthew McConaughey, though probably not deserving for his performance in Dallas Buyers Club specifically, has had such a tremendous couple of years on film and TV that it’s impossible to hate the fella (even when he knocks out an all-time great performance by Leonardo DiCaprio, who seems destined to become the Roger Deakins of the acting categories). You take the good where you can find it during awards season. Thankfully, the 86th Academy Awards had plenty of good to take.