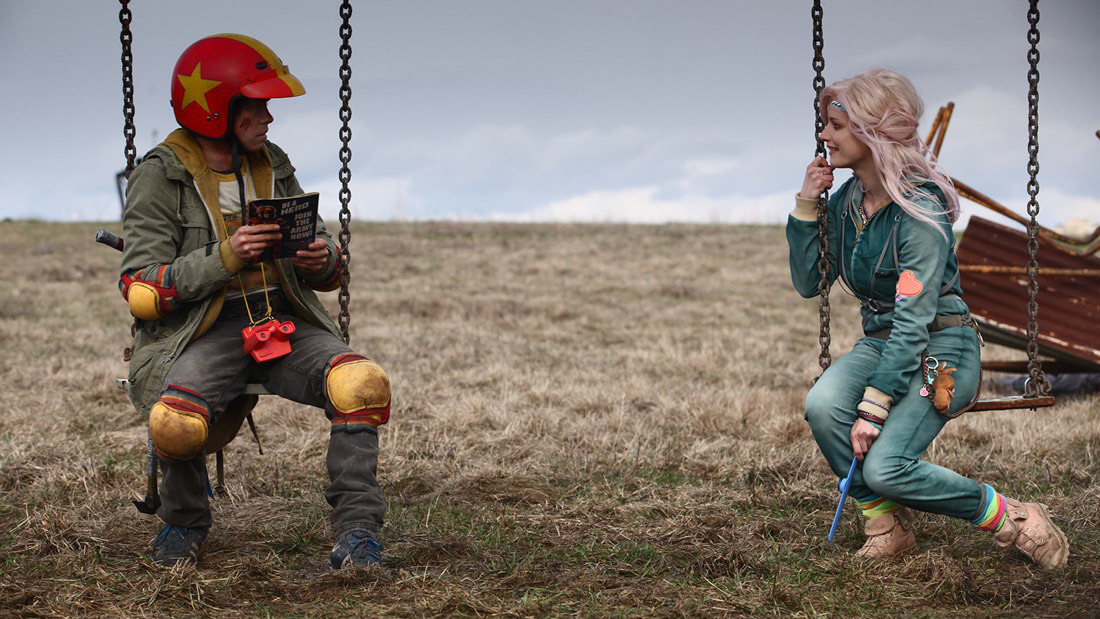 The post-apocalyptic future of Turbo Kid might be set in 1997, but the film’s stylistic sensibility is straight from the 1980s. That’s the point, of course; the whole film is intended as an ode to the campy gewgaws of ’80s pop culture. It’s a movie that’s about looking back at a bygone time, both for the characters and for the filmmakers, François Simard, Anouk Whissell, and Yoann-Karl Whissell, who operate under the collective appellation of The RKSS, or The Roadkill Superstars. Cleverly, they’ve tucked their fondness for the ’80s into their protagonist’s fondness for the decade, but when you’re lifting aesthetics from Mad Max and songs from the BMX flick Rad, you’re not really fooling anyone with nostalgic transference.

Turbo Kid takes place after acid-rain deluges have turned Earth into a desolate wasteland. As in just about every movie of its type, the remaining humans in Turbo Kid’s world have been reduced to nomadic bartering cultures, where everything they own is cobbled together from the remains of other bric-a-brac they’ve stumbled upon. The Kid of the title (Munro Chambers) is one such scavenger, a loner holed up in an underground bunker where he does little more than fiddle with the baubles he collects and read comic books—most notably, Turbo Man, the Kid’s favorite superhero and primary inspiration. Then he bumps into an equally lonely but endlessly cheery girl, Apple (Laurence Lebouef), and after an awkward introductory phase, the two strike up a friendship until she gets kidnapped by Zeus (Michael Ironside).

Zeus is a one-eyed warlord after Dennis Hopper’s heart, the kind of guy who likes to capture dissidents and helpless types and have them fight to the death in his private bloodsport arena. The Kid goes to save his new friend, and in the process discovers that Turbo Man is actually real, though long dead. Donning the fallen warrior’s armor, the unlikely good guy goes off to face Zeus, and Turbo Kid starts to get some traction. Before that point, the film is really about breaking out of personal isolation, an idea that carries through to the film’s climax. But make no mistake: Nobody made Turbo Kid to offer commentary on the human condition, except for when that condition is “liquefied” or “dismembered.”

Jason Eisener, he of Hobo With a Shotgun and the “Slumber Party Alien Abduction” segment from V/H/S/2, produced the film, and it shows. Everything about Turbo Kid is messy and cheap; its action scenes appear to mostly take place in roughly the exact same gravel pit to save on costs and to disguise the intentionally slapdash effects. Limbs are severed, heads hewn in half, upper and lower torsos exploded, guts unraveled. The directors try to be as gross as possible on a budget. Occasionally, the gore storm they concoct satisfies, but only when the film surrounding it isn’t being ponderous and boring, or falling into the same snares as less violent, more run-of-the-mill superhero movies—the origin-story impulse, for example, or the tiresome threads of destiny. The reliance on tropes makes all of the arterial spray feel rote, predictable, and anything other than fun.

Like the Sharknados of the world, Turbo Kid is a purposeful attempt at making cheesy, B-movie trash cinema. We’re supposed to chuckle along as the film winks at us. But the problem with making a movie to emulate bad movies is that inevitably, you wind up simply making a bad movie. When The RKSS focuses on the relationship between the Kid and Apple, Turbo Kid manages to be surprisingly sweet, in large part because Lebouef is outrageously lovable. (Chambers isn’t half-bad either, though as Degrassi refugees go, he’s got a lot of catching up to do before he’s standing next to Nina Dobrev and Drake.) But that sweetness is muddled by an excess of excess and terrible craft. Taking potshots at movies for being willfully bad might be a waste of time, but then again, so are willfully bad movies.