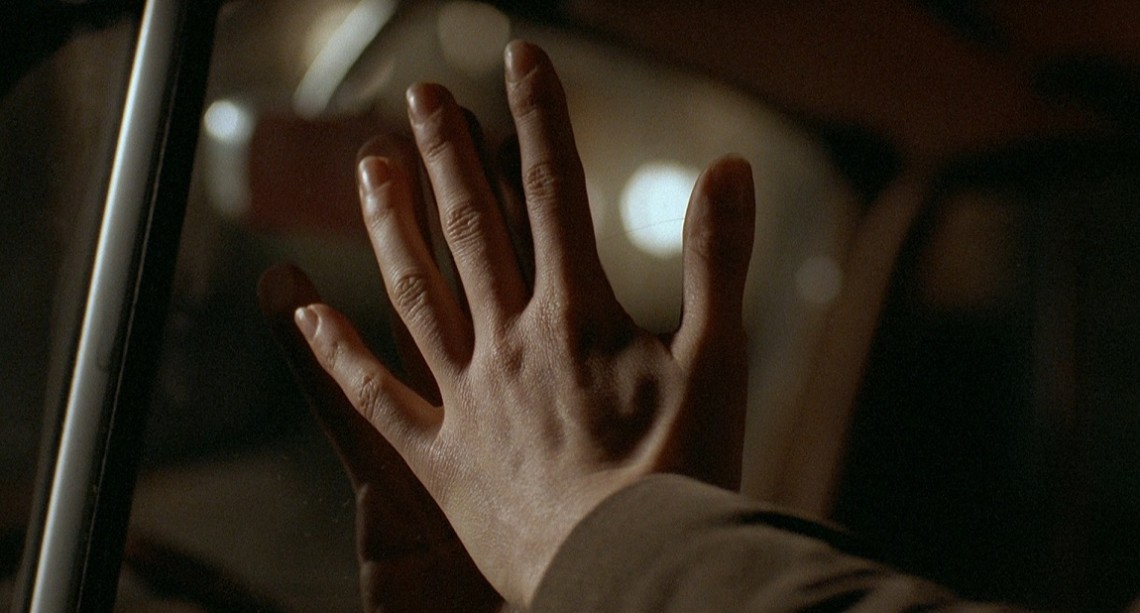 The final entry in Krzysztof Kieslowski’s thematic trilogy once again explores one of the virtues represented by one of the colors of the French flag. Red represents fraternity, and the way Kieslowski explores it might be the most unusual and complex of the three films. Where Blue and White critique their respective virtues, Red ultimately affirms the ties of fraternity, making it the most optimistic film in the trilogy.

The core friendship of the film is forged through unusual means. Valentine (Irène Jacob), a young model, hits a dog with her car. She nurses the dog back to health and tracks down the owner, a retired judge (Jean-Louis Trintignant) who seems disinterested in taking back his dog, even though the dog continues to return to him. Valentine quickly discovers the judge’s dark secret: he’s illegally eavesdropping in on the phone calls of his neighbors. While initially repulsed by the man and his actions, she forms an unlikely relationship with the man after he turns himself in to the authorities.

This core relationship ultimately affirms the virtue of the film. While Kieslowski vehemently critiques the values of liberty and equality, he embraces fraternity and shows how it can flourish and grow through unusual means. However, this is not to say that everything in the film is a positive affirmation of the bonds of fraternity. In typical Kieslowski style, there are elements that undercut this idea.

For one, the film’s subplot follows Auguste (Jean-Pierre Lorit), a young law student. His life seems to be in wonderful order, he has a loving girlfriend, there’s a strong chance of a good career ahead of him, but as the film progresses, he learns of the horrendous betrayal of his girlfriend who is having and affair with another man.

Issues of technology permeate the film. The opening shot follows seemingly endless meters of telephone wire that leads to Valentine’s phone. While this wire connects Valentine to her boyfriend, this connection does not foster real fraternity. The distance of the phone as a form of communication leads her boyfriend to jealousy and mistrust, especially when Valentine by chance misses a call or doesn’t pick up promptly.

This observation has become more pertinent in a world where instant and immediate connection to our friends is expected, and in some cases demanded. Kieslowski observes that this sort of expectation for communication is too demanding and selfish to foster true fraternity through trust. Instead it will pervert and usurp the very thing it is trying to facilitate. It will lead to miscommunication and distrust.

The judge’s eavesdropping explores how technology allows us the use the drive and desire for fraternity, to connection with human beings, to intrude into the lives of others. Tools meant to connect other people can quickly be used to monitor people and destroy bonds of privacy that will ultimately hurt lives and can break apart friendships and families.

But not all technology ends up working against the bonds of fraternity. Perhaps a bit biased, Kieslowski affirms the camera image as a way we can connect with others. In the final act, the judge worries over the fate of Valentine after the ferry boat she takes ends up capsizing. He sees a news report that shows Valentine is one of the few survivors. In this case, the television image has helped allay concerns.

This final sequence of the film brings together characters from all three films in the Three Colors Trilogy. We see Julie and Patrice from Blue, Karol and Dominique from White and Valentine and Auguste from Red. Some have found how the film brings all these characters together contrived, but thematically it’s an ultimate affirmation of the deep bonds of fraternity, the most ultimate expression of which is romantic love.