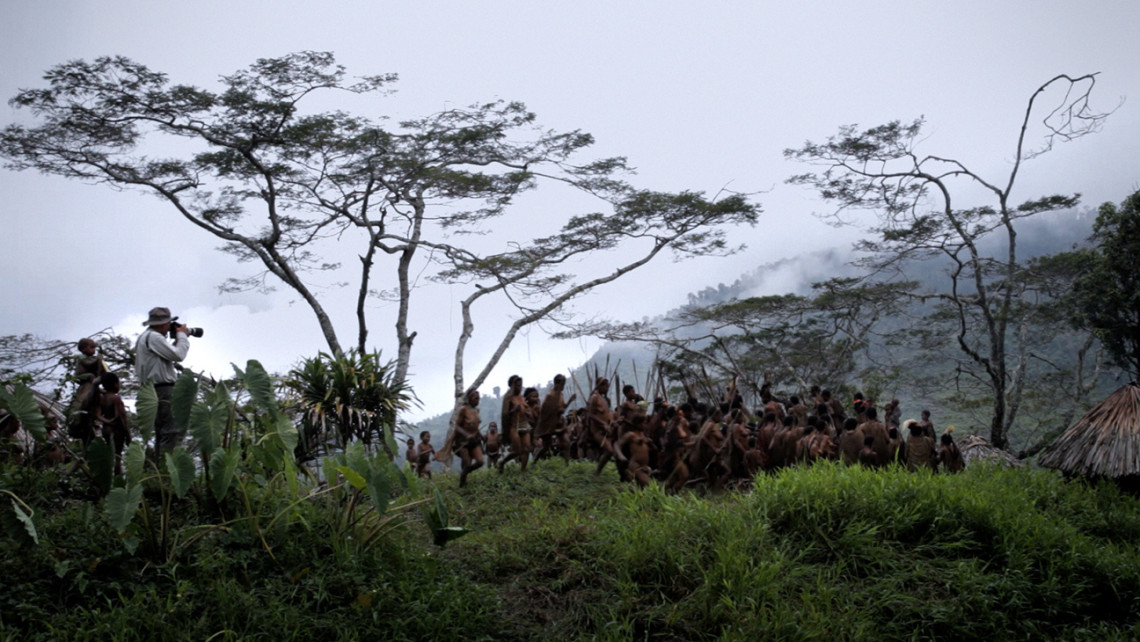 “The Salt of the Earth”

A curious reunion of cinema with its ancestral art of photography, Wim Wenders’ co-directorial project The Salt of the Earth celebrates the life behind a cameraman’s images. The film’s subject is world-renowned photographer Sebastião Salgado, an artful adventurer who has journeyed back and forth to the ends of the world, and deep into its hell-scales (and we are its title seasoning). His black-and-white photos have previously been seen in collections and exhibits (“The Other Americas,” “Sahel,” and most recently, “Genesis”). Now, his work gets the feature film treatment, a greatest-hits coverage whose form does not inherit the profound illustriousness of his cumulative work. Wenders shares directorial duties with Salgado’s son Juliano, so the project is a documenting tag-team of opposing levels of artistry; one filmmaker is certainly Wim Wenders, and the other is not. Nonetheless, they work together to provide a full picture of Salgado’s work, past and present.

Echoing the trademark of the subject’s work, Wenders shoots all of his material in black-and-white. In scenes where Salgado’s talking head fades into his photographs, Wenders fills in the gaps on the stories behind his famous photos and the projects from which they’re derived. It’s a walking tour through an exhibit, for better or for worse, while S. Salgado’s elegiac voice-over recounts the perspective that influenced the pictures he took. To complete the viewer’s experience of being in a museum on Salgado, Wenders employs hokey atmospheric sound design to different pictures, in a blundered attempt to make the images feel more alive (Laurent Petigand’s string-heavy score does a greater service).

Meanwhile, the younger Salgado is responsible for staler passages of documented footage, which capture a more-modern Sebastião Salgado researching various environments with his camera. We follow them as the photographer shoots a tribe in Indonesia, or later when he pursues a group of sassy walruses, milling about with their tusks. Juliano Salgado’s footage offers an intimate coverage of its topic, but whenever his father aims to take a shot, it’s a reminder of the lacking vision within the documenting footage, as compared to the contextualizing photographs. When the older Salgado opines about a shot not having a good framing, it only exposes the comparable emptiness within his son’s interpretation. Wenders isn’t the easiest act to follow, but it’s the cross that Juliano Salgado signs himself up to carry. Here’s hoping that his currently-developing feature film debut (about upward mobility in Brazil, according to this movie’s press notes) boasts a richer eye.

The art at the center of The Salt of the Earth is unquestionable. Defined by spectacular framing and an otherworldly grasp of lighting, Sebastião Salgado’s center creations are transfixing, even if the film’s form sometimes relegates them to a slide show’s glance. These are images meant to fill a room’s atmosphere, not just a wall. See this film on the biggest screen possible, and find a “Pause” button.

The Salt of the Earth certainly does not have the sturdy sense of wonder as Wenders’ previous documentary Pina, the 2011 3D film that celebrated the vivacious choreography of Pina Bausch. Granted, that project involved subjects in motion, but The Salt of the Earth is too stagnant on its own terms, with the idea of making photography into cinema an experiment that this film concludes on with a bit of a stalemate. The Salt of the Earth is the kind of documentary that spurs an emotional exploration regarding the depths of inhumanity, but also inspires wonder as to whether some films might be better off as photo books.

One thought on ““The Salt of the Earth””