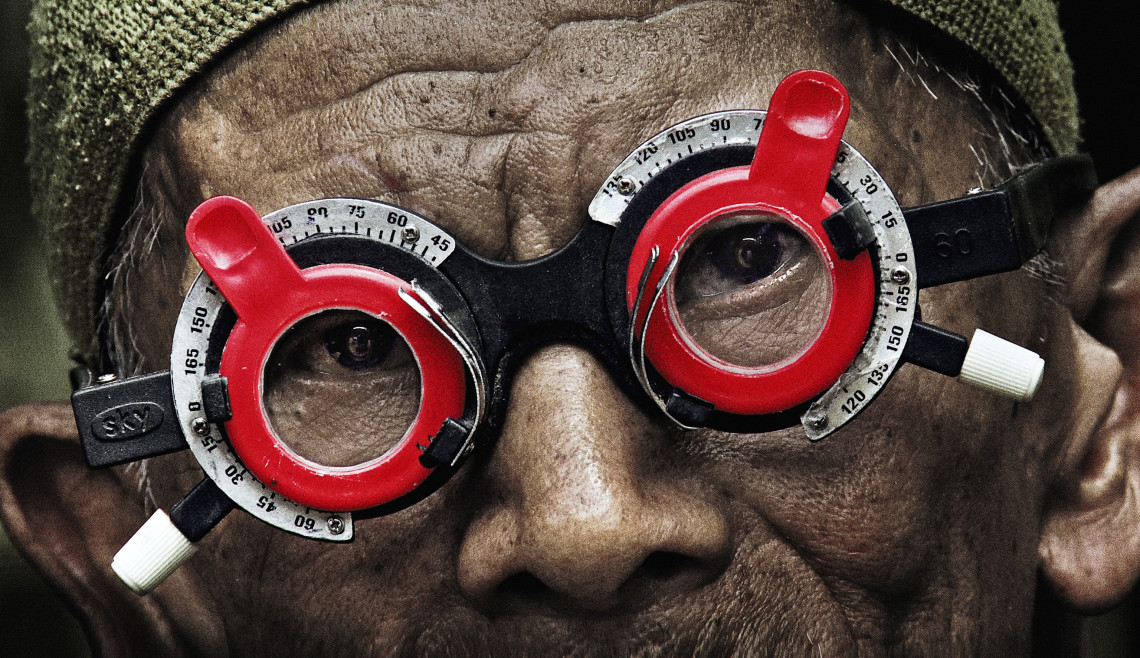 Joshua Oppenheimer’s The Act of Killing found an idiosyncratic, formally daring means of exhuming the ghosts of the Indonesian anti-Communist purges of the 1950s and ‘60s, cajoling surviving war criminals into confessing their atrocities by getting the proud men to act them out as if making movies. Oppenheimer’s approach loosed the tongues of unrepentant killers, but it also drew criticism for deceiving its subjects, and, more egregiously, aestheticizing and glorifying their actions. The Look of Silence, the director’s new feature on the same period of terror, could be seen as an apology to those detractors. Its primary subject, optician Adi Rukun, is not one of the ensconced officials who seized power in the purges, but someone traumatized by their violence, having lost a brother to those purges.

Reflecting how marginalized the true horror of the killing sprees have become, Rukun spends most of the film wandering rural hamlets and city outskirts, the verdant vegetation seeming to overgrow with the fertilized soil of mass graves. Cinema spirits hung over The Act of Killing as a bridge between propaganda and fact, but this film has the feel of actual ghosts haunting the areas around the decrepit survivors whom Rukun visits. His patients are old and withered, epitomized by an ancient man with nothing but gums in his mouth and eyes that cannot open any wider than slits, yet many can recall every minute detail of the suffering their families endured as targets of the new regime. It is their testimony that excavates the ghouls who reside in every corner of the nation; the grief that has barely lessened with time is etched into their faces, a chilling contrast with the pride of the anti-Communists and much-needed context to the official propaganda presented in this film and its predecessor that insists on unanimous belief in the righteousness of the killings.

In revising his focus in documenting the legacy of the coup, Oppenheimer also complicates the relationship of the United States to the destruction. The US spent the second half of the 20th century backing anti-Communist powers no matter how fascistic or murderous, and the film probes the tacit, off-the-record approval given to the Indonesian purges by American policy leaders. Even footage of a 1967 news report by Ted Yates clearly intended to note the horror of the situation is delivered with such classical newsman stoicism, the neutered centrism of Yates’ narration pitching the report’s tone so ambiguously that it can easily be read as a celebration of the anti-Communists’ ruthless efficiency. Oppenheimer even points the finger at himself in the ongoing whitewash of this piece of Southeast Asian history, showing Rukun the footage he gathered for The Act of Killing and studying the man’s face as disgust and pain curl over features to see the ongoing revelry of those who consolidated their power with terror.

Rukun also proves to be a capable critic, and soon he can suss out the sense of guilt suppressed by desperate bluster of the death squad members; watching one killer calmly relate his deeds, Rukun innocently says, “Maybe he acts this way because he regrets what he did.” Eventually, he even gets to confront some of the same death squad members Oppenheimer interviewed on friendly terms, some of whom played a part in his brother’s death. Rukun hones in on the areas that Oppenheimer failed to sufficiently explore, and he does away with the director’s ingratiating, affable outsider perspective in favor of direct confrontation. Rukun’s courage in coming face to face with these men is immeasurable, and that’s before he grills them on their culpability. The men are so unused to being challenged on the rightness of their behavior that they can barely contain their shock. “You ask deeper questions than Joshua did,” laments one subject, and it is precisely because he does that he offers a vital contribution to this film.

Rukun’s day job provides Oppenheimer with a convenient metaphor, finding in the eye doctor’s house calls and tools for regaining literal sight a literalization of the film’s quest for social revelation. But this also confirms Oppenheimer as one of a growing breed of documentarians rediscovering the importance of actual filmmaking in nonfiction filmmaking. The Look of Silence, like its predecessor, is not simply a moralizing issue doc urging a facile sense of understanding by way of an accessible primer. Instead, the diptych illustrates history with visual panache, and it attunes itself to the emotional conflict of survivor and perpetrator alike in the mixture of sorrow, denial, guilt and rage. It’s hard to judge either feature on its own; they are inseparably entwined as flip-sides of the same investigation, and they are each critiques and expansions of the other. Viewed collectively, they just so happen to represent some of the greatest work in the nonfiction field in decades.