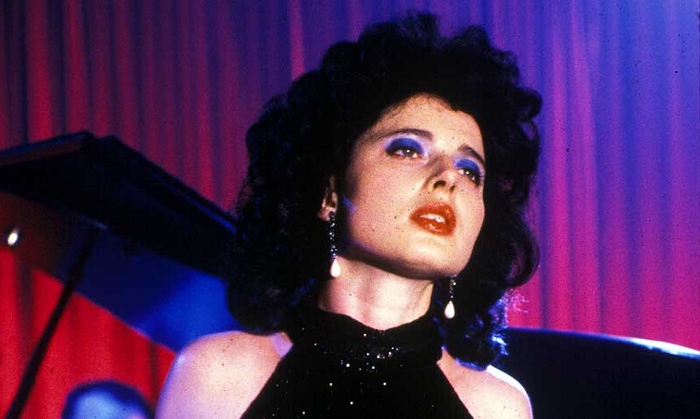 In my Retrospective piece on Dune, I asked the question: Why in the world Lynch decided to accept the helming duties for the Dune project even though he had no familiarity with the source material, and seemingly had no interest in it. Well, thanks to the marvelous invention that is Twitter, a follower brought up the most sensible reasoning for why Lynch accepted it by bringing up a detail that I myself brought up in the previous piece: The prospects of control.

When Dino DeLaurentiis gave Lynch the Dune job, he had him under a contract: Make Dune, and then after that, be able to make both a sequel and another project in which you have 100% creative control, no matter what. Seeing as how Dune completely failed on just about every front, a sequel was as good as dead. But Lynch was still under that contract, and now that he learned the horrors of a studio cutting down your work, he was now about to head something in which he had complete creative control and final cut.

The result was something that ended up redeeming Lynch from Dune, and transformed him from a director to look out for to one of the directors to look out for. This was the true Lynch that Eraserhead promised us. The one that both The Elephant Man and Dune were too afraid to show us. This project was not only what redefined David Lynch, but it also became one of the most influential films of the ’80s, and arguably in all of film history. A psychological descent into perversion, a scathing depiction of American suburbia, and just a simply enthralling, strange, and absorbing work.

This is David Lynch’s Blue Velvet.

Blue Velvet is a film of dualities.

It begins with Jeffrey Beaumont (Kyle MacLachlan) living in the cheery, suburban, Norman Rockwell-esque small-town of Lumberton only to stumble upon something startling: A severed human ear. And as the world around him seems to just goes on without a care in the world for this news (even when he shows it to the police, they act very nonchalant about it), Jeffrey feels as if he’s made an important, life-changing discovery.

“I’m seeing something that was always hidden,” he tells Sandy Williams, a friend he makes while embarking on his quest to unravel what is going on in Lumberton’s underbelly. “I’m in the middle of a mystery and it’s all secret.” In the world of Blue Velvet, the discovery of this ear is more than just a window into a seedier side of Jeffrey’s hometown. It ends up being a window into an entirely other world that was right under everyone’s noses.

This is why many people consider Blue Velvet to be the movie to start with when considering fully delving into Lynch’s filmography. Not only does it contain the same weirdness and abstract idiosyncratic nature of his stranger films bottled up into a story that’s actually easy to understand, but Blue Velvet is the definitive example of Lynch’s thematic obsession with the duality of human nature, reality, dreams, etc.

Jeffrey is a man inexplicably caught in the middle of these two worlds: The Rockwellian, Leave it to Beaver style suburbia he calls home, and the dark, macabre underworld that lies within. His constant shifting between these worlds is characterized by his affairs with two women from each of these disparate environments.

There’s Sandy Williams (Laura Dern), the police officer’s daughter. She’s shy, innocent, and completely drawn to the way Jeffrey gives himself over to this mystery, and the underworld surrounding it. Then there’s Dorothy Vallens, the singer who’s been held prisoner in this criminal underworld for a long time, and has now become a damaged denizen of it. Her young son and husband held ransom, Dorothy is forced to fulfill the disturbing sexual desires of nightclub owner Frank Booth (Dennis Hopper in one of his most famous and disturbing roles), who’s obsessed with the song “Blue Velvet”, PBR,  and inhaling copious amounts of helium.

To make matters more complicated, Jeffrey finds himself attracted to both women in some sense. To Sandy because she represents everything pure about the world he once knew; to Dorothy because of her otherworldly allure, and the possibility of saving her from the darkness. It is also worth noting that Sandy is a blonde while Dorothy is a brunette, another Lynch dichotomy that we will most definitely be seeing more of as we  progress further into the Retrospective. 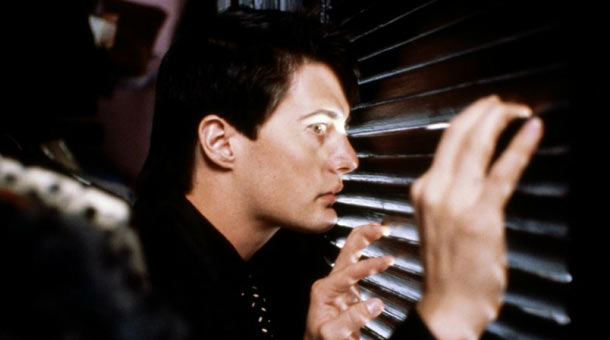 It’s interesting to note that while Lynch is toying with this notion of entirely different environments, he finds a perfect balance of depicting them both with equal parts realism and fantasy. He never tips too much onto one side, nor does he overemphasize the difference between these two worlds. The entire point is that they coexist together. There is always death lurking in the land of the living, and always a light trying to guide us in the world of darkness.

It’s also paramount to the film’s success that Lynch deals with these themes in generally realistic terms so that he can truly delve right into the base, abstract concepts that lurk within them. Instead of literalizing this “dayworld vs. underworld” dichotomy through fantasy, his placement of these themes on mundane, everyday American life ironically emphasizes the abstractions even further. We can see this happening in a small town we might have grown up in. It could be happening to someone who lives across the street from us. It’s not where you expect, and that’s what’s so horrifying about Blue Velvet‘s depiction of evil.

It’s like what I said in the Eraserhead piece. Instead of just piling all sorts of weird things on top of one another, Lynch’s version of surrealism comes through taking the real world and altering it in small yet immediately noticeable ways, creating an unsettling, just generally “off” feeling. These small details build up to create a wholly surreal atmosphere that is purely Lynch. Blue Velvet does this not only in a stylistic sense, but also within its thematic meaning. Blue Velvet can easily be interpreted as a simple tale of crime appearing even in the safest of places, but through Lynch’s lens, it becomes something truly universal.

The two worlds (and the women that represent them) end up colliding eventually, leaving death and misery in its wake. The evil of the “dark world” is only defeated when Jeffrey finally picks a side and makes the decision to bring light to the darkness instead of succumbing to it. The conclusion is a happy one–perhaps the most conventionally uplifting in Lynch’s entire career, and that includes The Elephant Man. And yet that undercurrent of darkness never really goes away.

It’s very subtle how Lynch reminds us of this remaining darkness. His brilliant opening and closing images are part of that. The film begins with its evocative scene of a man tending to his green lawn surrounded by white picket fences, only to suffer from a near-fatal stroke; the camera closing in at the soil where bugs by the hundreds are swarming right under his very nose.

It’s a perfect visual metaphor of the film’s central theme of evil lurking even in the most unlikely places, but what gives it true weight is the way Lynch brings it to the close of its arc at the end, when we see a robin holding a dead insect in its beak. It’s hopeful in the sense that one instance of evil has been defeated, but it also serves as a reminder that that insect is one of many, and they’re all still lurking below in that happy life that the characters have finally made for themselves.

Yet there’s still joy. And life simply goes on like it always has.

The final image of the film is of Dorothy Vallens, now free from captivity, embracing her child in the world of light. Upon seeing this ending again (for the first time in years), it brought in mind the conclusions of a lot of Lynch’s other films. In a way, a lot of them conclude with some form of loving embrace, whether it be literal or metaphorical. Eraserhead‘s Henry embracing the Lady in the Radiator. John Merrick a.k.a. The Elephant Man accepting the cold embrace of death. Diane Selwyn living forever in her Hollywood fantasy land in Mulholland Dr.‘s conclusion.

There’s a scene in Blue Velvet that foreshadows the image of the robin in the film’s end. Sandy, describing a dream she once had, says “In the dream, there was our world, and the world was dark because there weren’t any robins and the robins represented love. And for the longest time, there was this darkness. And all of a sudden, thousands of robins were set free and they flew down and brought this blinding light of love. And it seemed that love would make any difference, and it did. So, I guess it means that there is trouble until the robins come.”

As Jeffrey Beaumont says repeatedly in the film, it’s a strange world we live in. Some people never escape the darkness. But sometimes… the robins come. Freeing us of our dark path. Forgiving the mistakes we made. And life goes on.

Blue Velvet proved that a director working in his element with full creative control could lead very well into success. The film was seen immediately as a masterpiece, even when it flirted with both controversies regarding its sexually deranged material and a few divisive reactions from critics (Roger Ebert famously panned the film with a 1/4 star rating). On top of all that, it was a financial success as well, going well over its fairly low budget of $6 million and inspiring many independent filmmakers to the point of numerous rip-offs.

How would Lynch follow up this success? It was clear that he would strongly hesitate accepting another studio offer after the Dune debacle. At the same time, however, it’s easy to want to go bigger in scope, budget, and gain higher-profile actors.

Thankfully, however, Lynch remained true to his roots while also going in a wildly different direction. Next week, we discuss Lynch’s best year ever (1990) and the Palme d’Or winning Nicolas Cage/Laura Dern romance Wild at Heart.