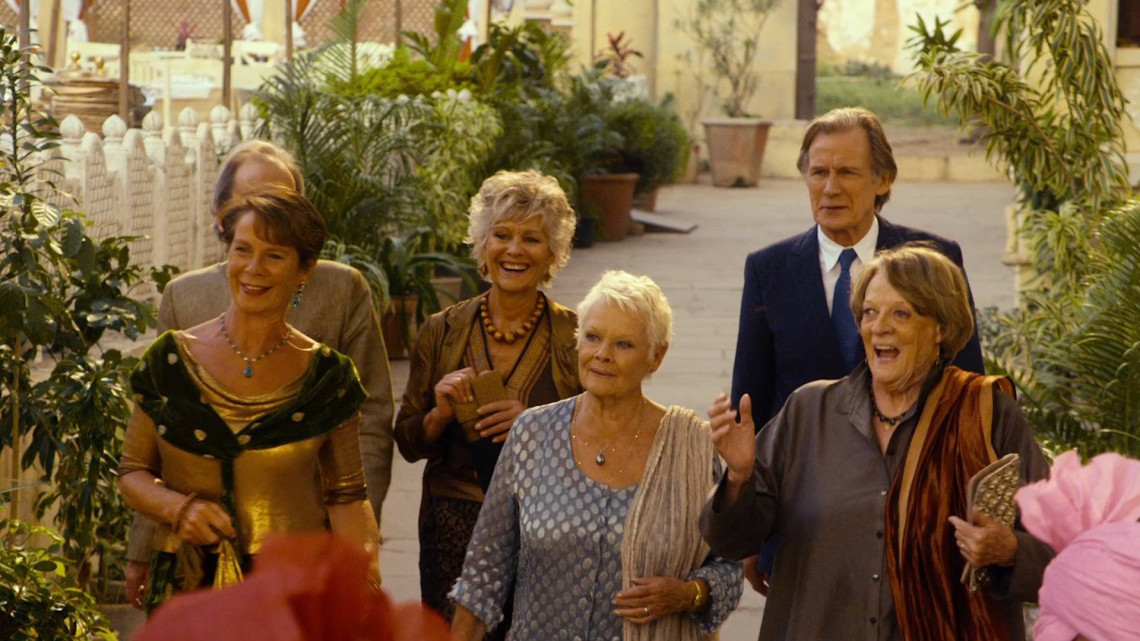 Don’t hold your breath, but the setting for this sequel to director John Madden’s The Best Exotic Marigold Hotel is still the first title location, even though this new film spoils that a second one eventually comes into the picture. For the most part, the tourist residents are still the same (although Tom Wilkinson made it out dead in the original). But now that the discovery element in the 2012 original has passed, this narrative scrounged from writer Ol Parker struggles to find something interesting for these people to do. Taking an even lighter tone (and a PG rating), the script fails to maintain a patent liveliness.

This second one focuses on the residents’ relationships, including a thousand of them to create a false sense of inertia. In no particular order: free-spirits Norman (Ronald Pickup) and Diana (Carol Parr) are experiencing insecurities about liking each other, having done the non-monogamous mambo for most of their lives. Things get a little more complicated when Ronald thinks he accidentally hires a cab driver to kill Diana. It’s an amusing concept by design, but unfunny in execution for how it allots ignorance as another tourist privilege.

At the same time, the independent Madge (Celia Imrie) is weighing the scales between two affectionate Maharajahs, but realizes through a couple of brief chats to and fro their residences that maybe she likes her driver Babul (Rajeh Tailang) instead; cringing whimsy ensues.

Of the hotel residents, the richest relationship belongs to Bill Nighy’s pleasant klutz Douglas Ainslie, who has a kind eye for Evelyn (Judi Dench). They’re separated by the current conditions of their new lives in India – he has an estranged relationship with wife Jean (Penelope Wilton), while she’s in demand to use her sass for bartering for fabrics for a local company. They go back and forth, with some amusing banter that passes the time.

Oh, and for good measure, there’s yet another strand in which Richard Gere shows up at the hotel as smooth silver fox Guy Chambers, who Dev Patel’s hotel co-owner Sonny thinks is an inspector sent by investors who might help him franchise. Sonny bungles in being a good son, fiance, and manager while trying to impress Guy, even though the inspector might be a different new guest, Tamsin Greig’s Lavina Beach. Guy just wants to work on a book (about aging!) and spend his time schmoozing on Sonny’s mom (Lillete Dubey).

The film does have one subplot that comes closest to earning its desired emotions, that of Sonny and his struggle to maintain a personal life while trying to excel at his passion, the hotel business. Not only is he due to be married to Sunaina (Tina Desai), but an old friend named Kushal (Shazad Latif) is stepping on his toes, and creating a frustrating competition. With the film framing itself around Sonny’s wedding, Patel’s hyperactive yet helpless performance garners endearing weight in an otherwise light tale with little dramatic ground.

Despite this loaded list, Madden’s movie remains as stagnant as Maggie Smith’s Muriel Donnelly character, mostly a star cameo with little required of her. She appears for some gratuitous dashes of salt, but is more a piece that is shifted  in the script’s tedious emotional busywork. A now-franchise that initially debuted opposite Joss Whedon’s 2012 Marvel ice cream sundae, The Second Best Exotic Marigold Hotel offers the equivalent experience of an AARP Avengers, with the overload of a narratively greedy albeit fan-servicing blockbuster.

A universal saving grace throughout is when the film can express Indian culture without the obtrusive perspective of the hotel’s tenants, as with the wedding of Sonny and Sunaina. It’s a rich celebration that provides the pure liveliness the script’s narrative can only desire.

However–and excuse the Seinfeld introduction–what is the deal with white people? I ask this about The Second Best Exotic Marigold Hotel as a fellow boring white dude who wriggled through the awkwardly colonial mess, embarrassed for the entire world as pasty American and British tourists wedged themselves into Indian culture with cheery naiveté intact. The sunny tale may seem to focus on basking in life’s twilight, but the possibilities certainly speak to the opportunities of a specific demographic when it’s clear that no Indian citizens are staying at this hotel (“for the elderly & beautiful,” its subtitle states), unless those citizens work there. It’s the same when Indian men and women are consistently treated with a dehumanizing glow to them, parsing wisdom that becomes egregiously token. Instead of just being a lousy vacation movie, the ugly attitude within The Second Best Exotic Marigold Hotel is well-deserving of some humbling, especially as it strives to put people in their place, and not in a guest management way.