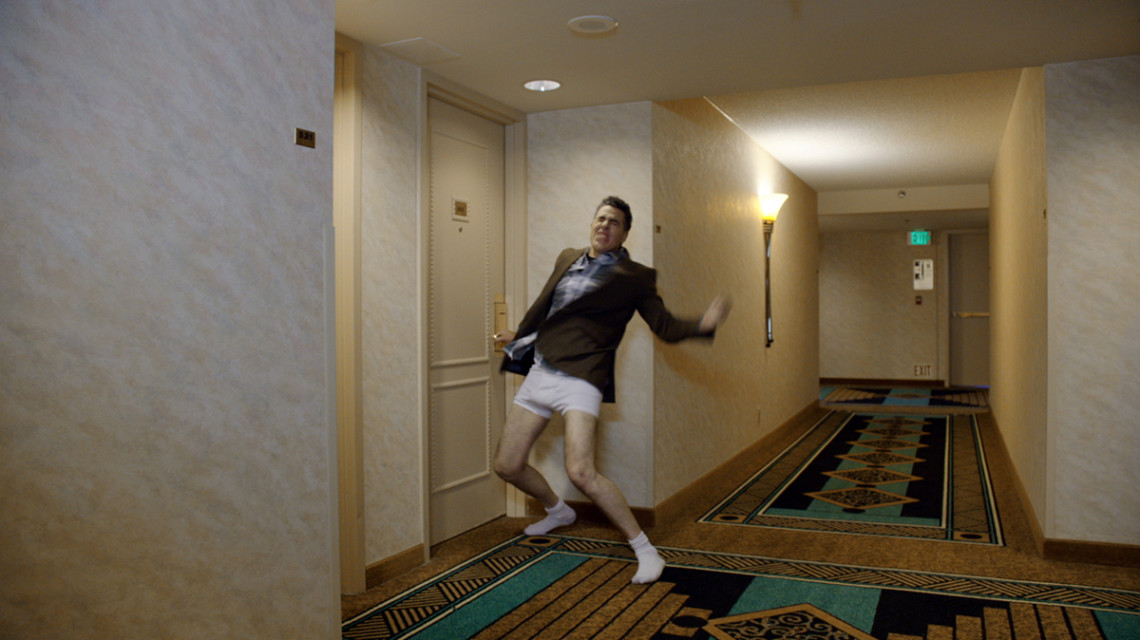 Waving the flag of the persecuted non-PC American idiot, Adam Carolla is a gasbag, a babbler, and/or a loudmouth with nothing to say. Sans the reflective spotlight he puts on himself as actor/writer/co-director (sharing the two latter duties with Kevin Hench), Road Hard is a boring middle-aged comedian’s non-edgy rebellion against the low-hanging comedic fruit of the world, including hotel rules, airplane passengers, and women. Such episodes are experienced by Carolla’s foil Bruce, a joke-telling divorcee living in his ex-wife’s garage, who makes his living performing well-attended shows across America. All the while, the past tries to tell him that he’s a failure, as he’s more recognized in public for his former co-hosting of “The Bro Show,” which his comedic partner Jack Taylor (Jay Mohr) has excelled past with his own A-list celeb-schmoozing talk show. But when his daughter Tina (Cynthy Wu) needs money for college, Bruce has to figure out how to pay for it, which involves either going back out on the road, which bores him, or hoping that his agent (Larry Miller) gets him a desirable gig.

Like how former “Man Show” co-host Carolla’s talk show (2005’s “Too Late with Adam Carolla”) tanked next to Jimmy Kimmel’s, or how he’s stuck playing comedic second fiddle whenever onscreen, Carolla wants to pit himself in this narrative as the underdog. The problem is his shrugging attitude to storytelling — he doesn’t want to take part in any of the heavy lifting an underdog patently needs to overcome. Bruce’s comedic skills aren’t an issue; he’s fine admitting out loud that maybe he didn’t work as hard as Jimmy Kimmel–er, Jack Taylor–and even the almighty road seems like a stress that he can separate himself from with little conflict. Part of it is a performance with no arc, and the other is a story that never wants to make him a joke that must be redeemed. There’s no tension to this narrative that exists plainly for its third act, in which Carolla is shown doing something other than stand-up, simply echoing his latest co-hosting gig, Spike TV’s “To Catch a Contractor.”

Carolla certainly co-writes and stiffly acts as a comedian writing about a comedian, crafting a narrative and its various episodes from behind a stand-up’s microphone. Previous funny people-turned-screenwriters like Woody Allen have been able to find a balance when making their joke-writer characters funny, in a way that presents their cleverness as a natural expression. Carolla is unabashed in the way that Bruce is always on, a start-stop machine of awkwardly placed tangents, with supporting actors trapped to respond with on-screen reactions. The result is an overwhelming feeling of desperation, which remains as unapologetic as this movie’s horrific perspective on women. Finally, a feature film version of “Too Late with Adam Carolla.”

Carolla & Hench’s aesthetic is fittingly plain, where even the flat lighting leaves one itching for emotion. Its biggest trick is a tracking camera, which is used idly for generic coverage. But even when Carolla is on-stage and performing with some type of emotional subtext, this definitely ain’t Lenny.

In the exploding history of crowd-funding, Road Hard deserves a paragraph. Not only does it have the longest thanks section I’ve ever seen, but it is a $1.4 million project with upwards of 13,000 donors. As gratitude, it is a project slapped together for those who stuck by the comedian through numerous debacles, and have turned his career of sporadic laughs into a coterie of albeit record-breaking podcast-listeners. This movie is for those who want to see Carolla, and his eye-rolling comedic persona, in action; instead of just hearing him take on the world as a dorky has-been, his directorial debut fulfills the desire to see him become one (and then have it classified as acting).

Despite temptations of reflections on what it means — of all things — to be the other man of “The Man Show,” Carolla finds a groaning safety in the opaqueness he’s allotted by the film’s fan support, working without the proper craftsmanship as actor/writer/director to even successfully half-ass this. As Road Hard chooses such mediocre assembly over artistry, his everyman mentality feels much more like a cop-out.