‘The Wolf of Wall Street’: Sex, Lies, and Lemons

Martin Scorsese’s pictures wade through the darkness of the human soul, but rarely has his viewpoint been as bleak – as hopeless, really – as it is in The Wolf of Wall Street. The man, one of the American cinema’s living national treasures, has built a cinematic canon full of flawed, borderline-irredeemable individuals; Travis Bickle, Henry Hill, Jake La Motta, liars, crooks, murderers, serial womanizers, the list goes on.

His films have never endorsed these men (and, occasionally, women) but you could always feel Scorsese behind the camera, understanding their problems, sympathizing with their plight; making their every pain real with music cues and whip pans and crash zooms. In short, he empathized. In “Wolf,” perhaps for the first time in his career, that’s not true. The film isn’t engaging with the dark soul of a man, it’s a work of societal criticism, disguised as a character piece. There’s no empathy here. The only thing you can sense Scorsese doing, behind the frame, is shaking his head in disgust.

That character is Jordan Belfort (played by a raucous Leonardo DiCaprio), a stock-fraud-artist whose pump-and-dump schemes earned him quick millions, a knockout second wife, an endless supply of drugs, a McMansion, a yacht, and a free pass against any and all forms of comeuppance. This is Scorsese’s ‘wealth in America’ movie. Not a ‘wealth inequality’ movie, mind you – it’s just about wealth. About the way we define ourselves with it, chase it, obsess over those who have it, laugh at their exploits, forgive their transgressions. The way we use it to dress ourselves nicely, to buy our way up in the world, to earn respect, power, jobs, opportunities, whatever the hell we want or need. It’s about how we get off on money, and all the glorious bullshit that it can buy.

What’s so damn bleak about “Wolf” is that it prescribes no solution to that quandary. In fact, it works to demonstrate our own messed-up proclivities by getting us to rollick along with Belfort’s exploits for 150 of the film’s 180 minutes. It gets us to endorse him ourselves by laughing our asses off. Scorsese zooms into every line of coke snorted, dolly’s behind every iconic entry into the office, makes a punchline of every drunken exploit. The film is presented as if Jordan Belfort himself directed it, so every Quaalude swallowed and every hooker fucked is a moment of unqualified triumph. And we enjoy it, every step of the way. This isn’t highbrow black humor, this is a boys-behaving-badly comedy, not entirely unlike films like The Hangover and Old School, and there are no pretensions surrounding the gags. 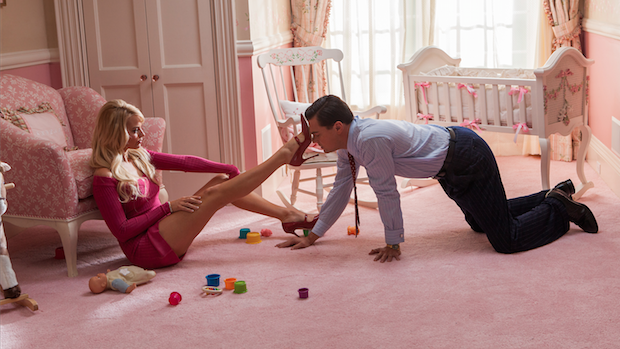 There’s no doubt where Scorsese stands on the matter, of course. He lets Belfort, through his voiceover, damn himself via omission. Jordan dumps his first wife – while standing under Trump Tower, tellingly – and never references her existence again. Another scene, late in the film, sees him brutally abusing his second; Scorsese’s camera catching their daughter lingering confused in the doorway, watching her dad. Belfort conveniently fails to mention this intrusion in his overlaid monologue.

See, this isn’t a rise-and-fall movie, because Belfort’s wealth and his self-aggrandizing never allowed him to truly fall. He’s not Henry Hill in Goodfellas, there’s no moment where he stops to say, “This was the bad time.” It’s just a rock-and-roll good-times comedy; one that Scorsese, on occasion, punctures with seconds-long intrusions of the individuals hurt by the man’s actions. In his life, these people – his daughter, his wife, his clients – aren’t victims. They’re just footnotes.

There’s a really famous quote often attributed to Scorsese: “cinema is a matter of what’s in the frame, and what’s out.” There’s a lot of ways to interpret that, but watching “Wolf,” it’s most telling where he starts and ends his story. He doesn’t give Belfort a background – the character steps off a bus in New York City as a fresh faced, all-American blank slate. The financial crashes of the mid-2000s, also, are left unreferenced, though they linger behind every frame. Scorsese’s Belfort doesn’t enter the world of Wall Street as an evil man, and he certainly doesn’t do anything to single-handedly change the course of the finance industry for worse.

He’s just another cog – an incredibly rich one, but a typical story none the less. The tenets of our money-buys-anything culture turned him into the client-robbing drug-consuming monster he was, and it’s suggested the same will occur to endless other baby-faced business grads and MBAs for innumerable years to come. The film ends not on a moment of hope or redemption, after all, but on the precipice of another nationwide financial disaster, one caused by men who were operating with the same presumed invincibility Belfort hid behind. 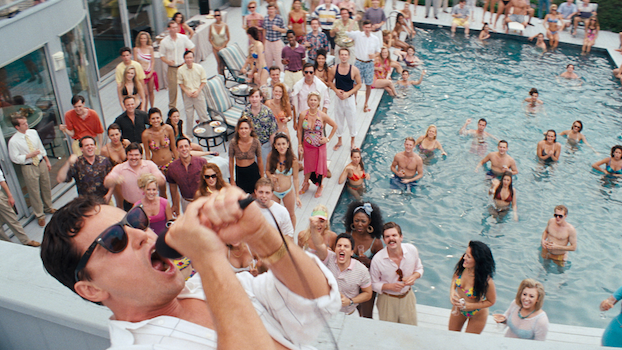 “Wolf” is dramatizing the meeting point between wealth fetishism, sex, drugs, self-made semi-celebrity, reality-TV-style celebrations of excessive behavior, and, oh yeah, wealth fetishism. In a sense, it’s about how our prisons are lined with drug dealers of the lower class while white-collar criminals rob and pillage from the poor only to walk free after a few months. A petty pill dealer, caught on the street with a handful of cash midway through the movie, spends as much time in prison as Belfort does himself for laundering millions upon millions of dollars.

Belfort gets arrested at one point, drugged up, sexually abusing stewardesses, and he gets away with it scot-free, because “luckily, we were in first class.” When the FBI finally catches him for his financial schemes, Belfort looks devastated, as if the party is over. That feeling only lasts for a moment. “I forgot,” DiCaprio’s Belfort says, while a shot of him playing tennis in a Club Fed prison lays over the screen, “I was rich.”

Matthew McConaughey shows up early in the film as a sort of proto-Belfort, an 80s stock guru who teaches our protagonist that the whole stock industry is a hall of mirrors, one that can only be navigated by men who do cocaine, jerk off twice a day, and have the amoral tendencies needed to take money from whoever they can get it from. He also teaches DiCaprio’s Belfort a primal, chest-bumping chant, one that Belfort passes onto the men and women working in his firm, and that they, the film insinuates, would pass on to the white collar criminals of the present and future. DiCaprio’s Belfort fancies himself an outsider, a lone wolf whose debauchery flies in the face of Wall Street’s more prestigious firms, but Scorsese’s picture suggests that men like him are lining the walls of every office.

The movie closes on a shot that recalls the average Joe’s that Belfort fucked over, and it isn’t sympathetic. Scorsese’s trying to deal with the implication that our society is fine with men like Belfort running free while lower-class criminals die in prison, and get abused on the street. He seems to have come to the conclusion that we laugh at the depraved exploits of the rich, and forgive them, because we’d rather imagine ourselves in such fancy duds than to reject the characteristics and exploits required to buy them. The film’s bleakness isn’t alleviated by its conclusion. We’d never want to truly punish a man like Belfort, Scorsese says, because deep down, we all wish we were flying in first class right next to him.