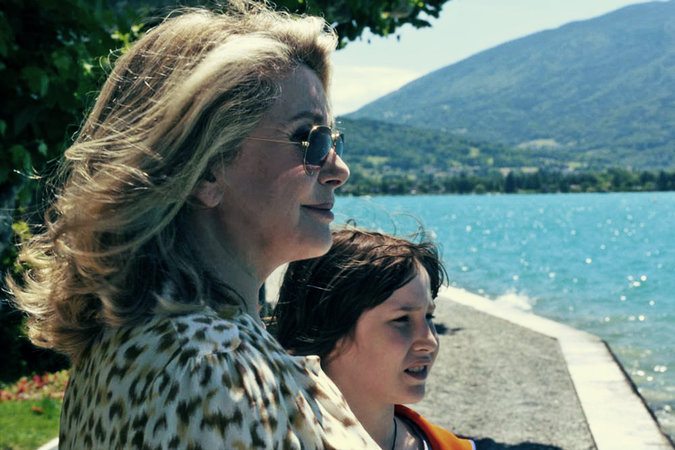 “On My Way” Hurries Along Slowly

Peaks and valleys; that’s the basic structure of French road trip film On My Way. As with January’s Gloria, the official Chilean entry for Best Foreign Language Film at this year’s Academy Awards, On My Way revolves around the mid-life crisis of its protagonist, in this case Bettie (the legendary Catherine Deneuve), sparked by her lover spurning her for the arms of a much younger woman. Unlike Gloria, though, On My Way stubbornly refuses to embrace its own shapelessness, and often grows inert by consequence.

Until it doesn’t. There are bursts of narrative vigor that pepper On My Way‘s running time — which clocks in at just a hair’s breadth under two hours — and give it purpose and drive; in these moments, the film feels most alive, and captivates our attentions with the greatest efficacy. That they occur only sporadically, leaving meandering stretches of nothing in between their comings and goings, becomes immediately frustrating. The effect is that On My Way feels like a good movie weighed down by the crushing weight of director Emmanuelle Bercot’s (one of the screenwriters on 2012’s excellent cop drama, Polisse) indecision.

On My Way begins as the aforementioned Bettie, harried and harangued in every corner of her existence, gets stabbed through the heart by the man she’s seeing; rather than divorce his wife and marry Bettie, he’s divorced his wife and married a twenty five year old instead. Bettie has too much on her shoulders to bear the lecherous betrayal – an estranged daughter and grandson, a struggling restaurant, a mother so elderly she’s verging on the ancient – and so she elects to hop in her car and drive, at first intending only on motoring around to clear her head.

A half an hour later, she’s hours away from home and even further removed from any desire to return. So she keeps going. And going. And going. If Bettie didn’t look, sound, and act like Deneuve, we might have very little reason to give a damn about her dedication toward picking up and getting out of Dodge; Bettie meets strangers, makes new friends, beds an insistent young man about thirty years her junior, and yet remains completely directionless as she hurdles through the pastured charms of Brittany’s countryside idyll. 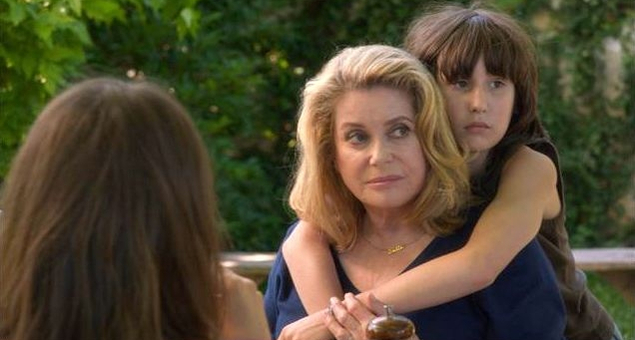 And then, all of a sudden, the unexpected happens: Bercot mercifully elects to gift On My Way with something resembling a plot. A phone call from Muriel (Camille), the child Bettie hasn’t spoken to in nearly a decade, infuses Bettie’s journey with purpose, and the film is all the better for it. Granted, the task at hand involves driving Muriel’s son, Charly (Nemo Schiffman), to the home of his paternal grandfather, Alain (French painter Gérard Garouste), hundreds of miles away; we’re not talking about high-impact stuff, here, and yet the meeting between grandmother and grandchild lends On My Way a dynamic sorely missing from its set-up.

Of course, even when Charly – problem child that he is – enters stage right, the story still maintains a tendency toward listlessness. Bettie has a destination now, but she’s still in no bloody hurry to get there; worst of all, Bercot can’t help but throw obstacle after obstacle in the duo’s path, whether it’s a roadside vomiting session, a declined credit card, or a tiff between Deneuve and Schiffman that forces the former to chase the latter down through a field. Eventually, they take a detour to attend a reunion between Bettie and her former beauty pageant acquaintances; she used to be Miss Brittany, back in the 60s, and someone wants to do a photo shoot featuring other one-time Misses altogether.

It’s not totally clear why she goes, other than to reinforce the fact that a) she’s still a knockout, and b) she’s no longer the girl she used to be. None of it really matters; we’re talking about Catherine Deneuve, here, so any overt acknowledgement of her looks feels like a case of being told something we already know. Ultimately, this and the other distractions that litter On My Way‘s itinerary just keep us from getting to the good stuff, which gets compressed into such a comparatively minute stretch of footage as to feel painfully rushed.

On My Way‘s third act is clearly the most important part of the film, so it’s a mystery why Bercot meanders so much before getting there. Maybe, having secured the services of Deneuve, the director just wanted to see how the iconic leading lady of films like Repulsion and Belle de Jour might react to having all manner of random, disconnected events thrown at her. For her part, Deneuve handles everything that rolls Bettie’s way with the sort of graceful, mannered aplomb one might expect of a screen idol with her bearing; she holds the entire film aloft, helped, eventually, by the precocious gifts of Schiffman.

But one can’t help but see the leaner, more focused film enmeshed within On My Way‘s fractured sheen. There’s a juicy story about familial strife, reconciliation, and catharsis bound up in this piquant little mess of a film; it’s a shame, then, that Bercot couldn’t make odds or ends of those elements. As the film’s coda reminds us, though, life goes on.