“Oculus”: Turns Out It Was Just A Reflector

Not being able to tell what’s real and isn’t real in movies, let alone those of the horror genre, has become such an overused, pretentious cliche when it comes to faux-profound filmmakers. So much so that when a film like Oculus comes along and does it so damn right, it’s all the more impressive. But don’t take from that statement that that’s meant to be the main draw of Mike Flanagan’s psychological horror film. Sure the film’s central, malevolent mirror is able to alter the perception of those caught in its grasp, but this is really more of a gonzo elaboration of Stanley Kubrick’s The Shining than yet another Paranormal Activity style spooker. Oculus manages to excel not only as a horror movie, but also as a portrait of a family descending into utter madness, and how the buried traumas of our childhood continue to haunt us all the way up to our adult lives.

Further reinforcing this theme is its parallel structure. The film opens with a quick establishing of the main crime at the center of the film: a father murders mommy-dearest in a fit of crazy rage, and the two children helplessly watch as they’re about to become the next victims. We then cut to these kids now grown up in the present day. Tim (Brenton Thwaites) has just been released from a mental clinic, having been thought to be the one who killed psychodad in self-defense, while Kaylie (Doctor Who‘s Karen Gillan) has interpreted the events of the past differently, believing that her parents’ more-than-abnormal behavior was caused by a cursed mirror that resided in their father’s office during the troubled years. As the older Tim and Kaylie set out to prove the existence of the supernatural entity living in the mirror, we witness flashbacks of their younger selves (portrayed excellently by child actors Garrett Ryan and Annalise Basso) slowly realizing something’s wrong with the way Mom and Dad (Katee Sackhoff and Rory Cochrane) are acting.

For a while, Mike Flanagan remains ambiguous as to whether or not the supernatural force influencing the family is truly real or just a figment of Tim and Kaylie’s clearly unstable mental states. Flanagan also played the ambiguous card throughout his debut feature, the Kickstarter-funded Absentia, which hinted at his potential as a talented horror director, but was marred by its severely cheap production values. That film, about a woman who believes that her husband – who disappeared for seven years – was taken by an eldritch monstrosity, was similarly coy with regards to whether or not the monsters were real or an imaginary means of coping with grief. Appearing to be a theme that fascinates the writer/director, the monsters of Flanagan’s films are born out of a simple absence of information, and he wisely never reveals too much nor too little. 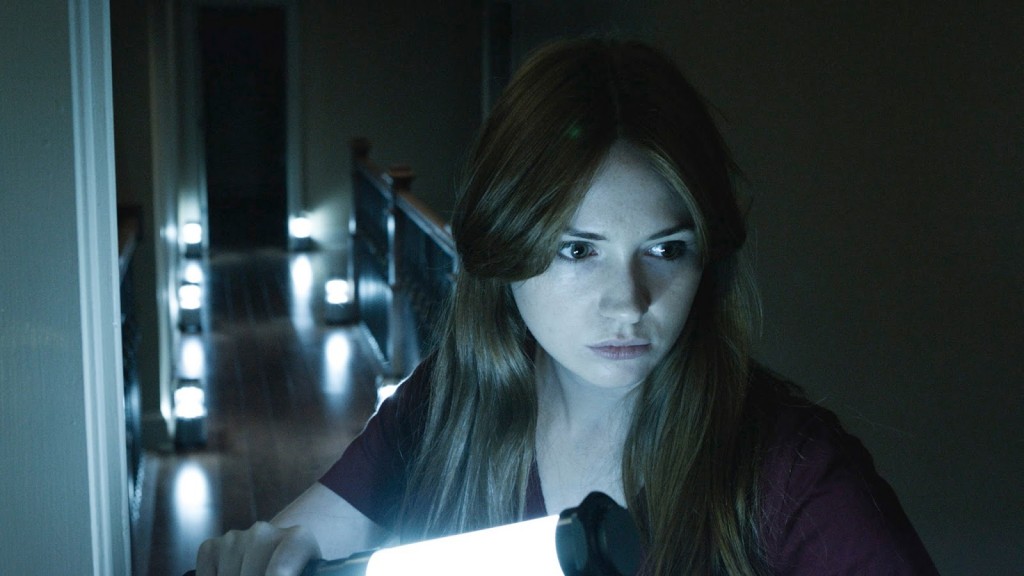 The way Flanagan toys with how much he reveals and then takes away is, in its own way, kind of genius. The first third entrusts the viewer so fully to go along with the mirror’s unique “rules” that it can be seen as a detriment to the film depending on the audience member and how willing he or she goes along. But Flanagan slyly – or frustratingly – subverts how the rules work, or breaks them completely depending on the scene. A good portion of the film is structured similarly to Lars von Trier’s Nymphomaniac, with flashbacks coming and going, intercut between scenes of Tim and Kaylie arguing over the validity of the events we’ve just seen, sometimes musing over how the mind creates its own information to fill in the blanks, or whether or not memory is as trustful as you believe. Oculus abandons that structure almost entirely in its second half, focusing more on pure dread than the digressions of our brother-sister pair. Thankfully Flanagan has improved considerably as a horror director in the time between Absentia and Oculus, crafting perfectly timed jump-scares, a deeply oppressive atmosphere, and some truly disturbing visuals (having not seen any of the trailers or ads for this film, the already spoiled “apple” scene was a real squirmer for me).

Gillan and Thwaites make a believable sibling duo, their arguments verbally suggesting a detailed history between the two of them. Gillan especially imbues her role with true conviction – exposition has rarely sounded more angry and driven. Even better are their younger selves, Basso and Ryan, who don’t strike up a false note in spite of the bizarre, grim material they’re working with. Sackhoff and Cochrane are saddled with the crazy-parent routine, but they manage to be deeply effective at that, with Sackhoff especially injecting a surprising amount of emotional heft and heartbreak to her unfortunately limited role. It’s also rare to get horror movie protagonists who act smart and prepared to face the incomprehensible horrors surrounding them. The older Kaylie sets up so many materials and tools to “fight” the mirror that it gives Flanagan and his co-writer Jeff Howard some truly devious ways of getting under the characters’ and audience’s skin. The entire cast is so game for the insanity Flanagan pushes on them – especially considering how batshit surreal the final thirty minutes get – that you can’t imagine a version of this movie without them.

But even more impressive is the editing, also done by Flanagan, which smoothly melds the present-day and flashback scenes so seamlessly that he not only successfully plays against audience expectations, he visually strengthens his themes as childhood traumas and/or nightmares literally invade the space of the present-day characters and remove complete comprehension from the equation. In spite of the way Oculus abandons its more argumentative, digression-heavy first half, it never leaves its commitment to ambiguity. There’s a very good chance that Tim and Kaylie are deeply unstable, and the events we see are simply products of their unreliable viewpoint.

But of course, Flanagan evades understanding, instead focusing on how these people rewrite memory to make a better present. After all, while it’s much easier to believe that Mom and Dad just caught the crazy-bug, Flanagan also suggests that the alternative viewpoint, a supernatural entity lurking in a cursed mirror, may be preferable to admitting that the people you cared about are the real monsters.

While it’s nice to get genre-exercises like The Conjuring, which focus squarely on the best possible executions of well-worn horror conventions, it’s even nicer to get a horror film whose horrors are so intrinsically rooted to very human fears and follies that they become one and the same. Oculus is that movie. Or it isn’t, depending on how you see it. And as the tagline seems to suggest: you see what it wants you to see.

5 thoughts on ““Oculus”: Turns Out It Was Just A Reflector”