Love him or hate him, Darren Aronofsky has always been a filmmaker with vision. Be it in the unrelenting close-ups and quick-cuts of Requiem for a Dream, the body-horror of Black Swan or the breathtaking celestial sights of The Fountain, he’s a director who revels in exaggerated, psychologically harrowing depictions of death, erosion and rebirth, his thematic concerns and core imagery consistent, even as his stylistic approach varies drastically from film to film.

Aronofsky’s latest film is his biggest by more than a $100 million. Yet from outside at least it appears to be right in his wheelhouse. The original tale of divine wrath, it’s a story rich in all the director’s signature themes, with a budget to birth grand and astounding images like he never has before.  Yet with money and scope come certain conventional obligations, to which the auteurist Aronofsky proves woefully mismatched. Chalk it up to studio interference, the realities of Hollywood filmmaking, or simply an artist whose reach has exceeded his grasp. Whatever the reason, Noah is the first film in Aronofsky’s body of work to feel unmistakably watered down.

Admittedly, the film is not entirely conventional either. Readers who remember their Sunday school lessons will no doubt be a little miffed by Noah’s take on the biblical hero (Russell Crowe), reimaged as a muscle bound wanderer and proto-environmentalist. Even bolder is the narrative invention of “the Watchers”, fallen angles covered in unwieldy shells of rock, who aid Noah and his family in the construction of the Ark.

Such outlandish theological liberties feel like classic Aronofsky. Yet the world and narrative that surrounds these creations is uncharacteristically bland. As the Ark takes shape and the unfortunately unconvincing CG animals begin to arrive, so too come other humans, intent on claiming the vessel for themselves. Obligatory mass action scenes follow, as Noah and his stony companions fight back the blaspheming masses. 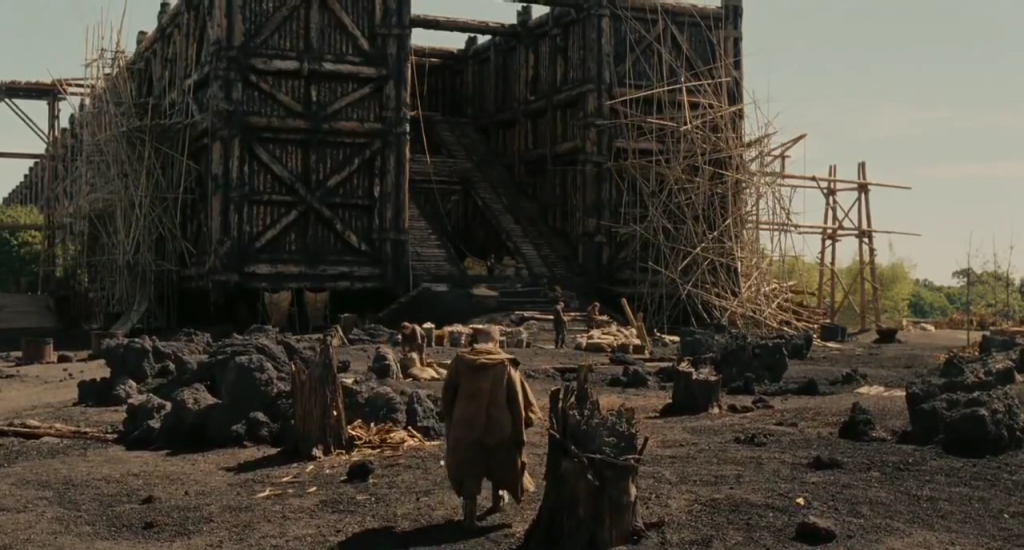 Amidst the would-be epic violence, Aronofsky attempts to explore the relationship between Noah and his sons Shem (Douglas Booth), Ham (Logan Lerman) and the preteen Japheth (Leo McHugh Caroll). Of the three, it’s Ham who you’d call the problem child, jealous of Shem’s relationship with their adopted sister Ila (Emma Watson). So conflicted and hormonal is the lad that, after Dad spurns his would-be love-interest, Ham finds himself drawn to his father’s enemy Tubal-cain (Ray Winstone). Like the battle sequences, the conflict feels painfully contrived; Lerman gives the part his all, but teen angst just doesn’t seem like a good enough reason to betray your entire family.

The film’s aesthetic, meanwhile, suffers the same problem as its plotting. Individual moments bear the director’s usual boldness – a mid-film account of the story of creation, in particular, will be rightly remembered as one of the most visually stunning moments in his filmography. For the most part though, Noah looks like just another generic, Lord of the Rings inspired fantasy film. Clint Mansell’s score is similarly disappointing, the normally bombastic composer delivering what sounds like little more than B-sides to his far superior work on The Fountain.

Yet despite the run-of-the-mill appearance and substandard storytelling, the worst thing about Noah is how little it engages with potentially fascinating religious concepts. The concept of faith is a non-issue, because everyone in the film, good and bad, knows that God is unequivocally real, albeit largely neglectful. Likewise, notions of fate vs. free-will go out the window when your Creator is choosing whether you live or die based on which son of Adam you descended from. Ultimately, Aronofsky affords neither God nor man much dimension, and many viewers may find themselves sympathizing more with the teeming leagues of humanity. Sure they’re unwashed and a tad on the rapey side, but at least they’re attempting to take control over their own destiny.