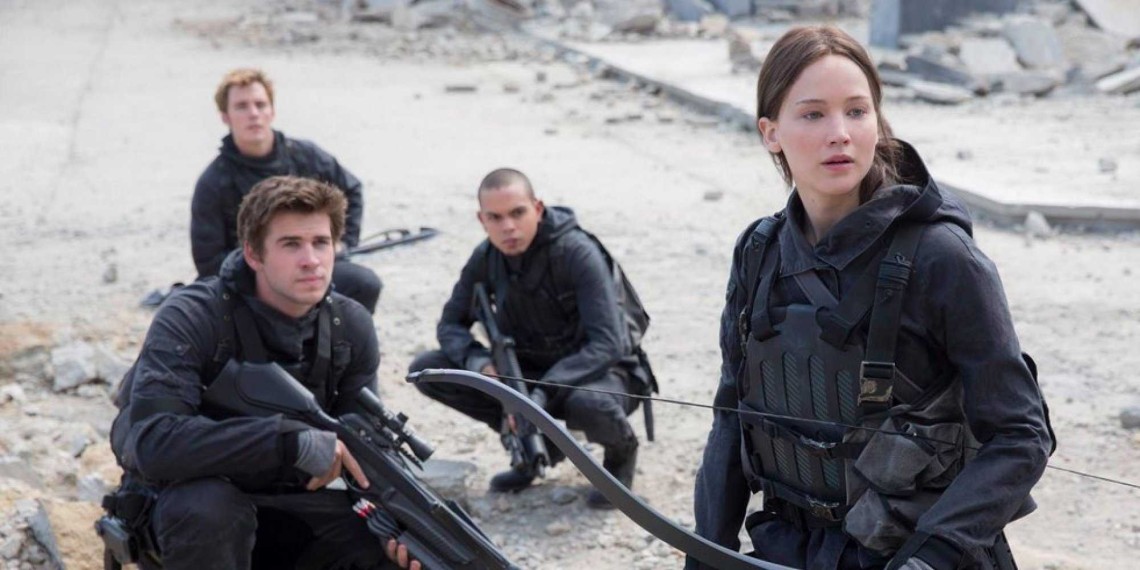 Yet again, splitting one book into multiple films proves to be a horrendous idea—artistically, that is: The two parts of The Hunger Games: Mockingjay will unquestionably make far more money than a single movie would have. It’s honestly surprising that a multi-part adaptation of a popular young-adult novel that isn’t the final installment in its series has yet to be announced. There’s even more money to be wrenched out of fandom, Hollywood. Get on it!

After the events of Part 1, the various Districts of the post-apocalyptic nation of Panem are now in united rebellion against its dystopian government, headquartered in the Capitol. (Someone has to have mentioned by now that it should be “Capital,” right? I’ll mention it, just in case.) Katniss Everdeen (Jennifer Lawrence) is severely burned out by her role as the “Mockingjay,” a living propaganda symbol for the revolution, and wants to make a real difference by being the one to kill Panem’s dictator, President Snow (Donald Sutherland). To that end, she sneaks off to the front lines as the rebels advance on the Capitol, ready to end the war. She’s joined on her mission by her boy toys Peeta (Josh Hutcherson) and Gale (Liam Hemsworth), along with a squad of other supporting characters and cannon fodder.

As in the cases of Harry Potter and the Deathly Hallows, The Twilight Saga: Breaking Dawn, and The Hobbit, the way that Suzanne Collins’s Mockingjay has been turned into multiple films has left most of the exposition and setup for the first part and most of the action for the second. One would think that this would be far less ruinous for the pacing this time around than it was for the interminable Mockingjay – Part 1, and yet Part 2 still feels the need to ladle ruinous padding onto what should have been a lean, mean war picture.

There’s a good framework in place here for a sci-fi (wo)men-on-a-mission film, but the series’ need to pay lip service to its allegedly complex portrayal of politics and revolution means that the movie stops itself dead after every action beat either to check in on the propaganda war between President Snow and rebellion leader President Coin (Julianne Moore) or to reiterate the love triangle that no one cares about with Katniss, Peeta, and Gale. The story is a disastrous refrain of alternating dullness and scrambling. The audience’s emotional investment is based solely on the momentum of the previous films—such is serialized cinematic storytelling now. Paradoxically, a large number of characters (and their actors, such as Jena Malone and Jeffrey Wright) are given almost nothing to do, robbing weight from the climactic proceedings.

Although there’s a decently tense sequence in a sewer, the action is otherwise as much of a headache as everything else in this series. Upon noticing that one character was missing after a fight, I was honestly unable to figure out at what point they had died. The brutality (characters are disintegrated, devoured, firebombed, and worse) is theoretically horrifying, but rendered artificial by CGI gloss and near-total bloodlessness. This series has always made a mockery of the MPAA’s standards for PG-13 violence, but there’s nothing mature about its look at war, no matter how po-faced it is.

The same extends to the film’s political worldview. Making Coin a possibly just-as-bad option as Snow doesn’t really add nuance to the conflict; it’s only emblematic of a quite basic “What do you do when both sides do bad things?!” concern. That’s only more complex than a good-and-evil battle in the same sense that three is a greater number than two. Ultimately, despite its grimness, The Hunger Games adds up to little more than an adolescent feel-good tale about an evil dictatorship getting overthrown by a bunch of teenagers—one of whom can beat trained gun-wielding soldiers with a bow and arrow.