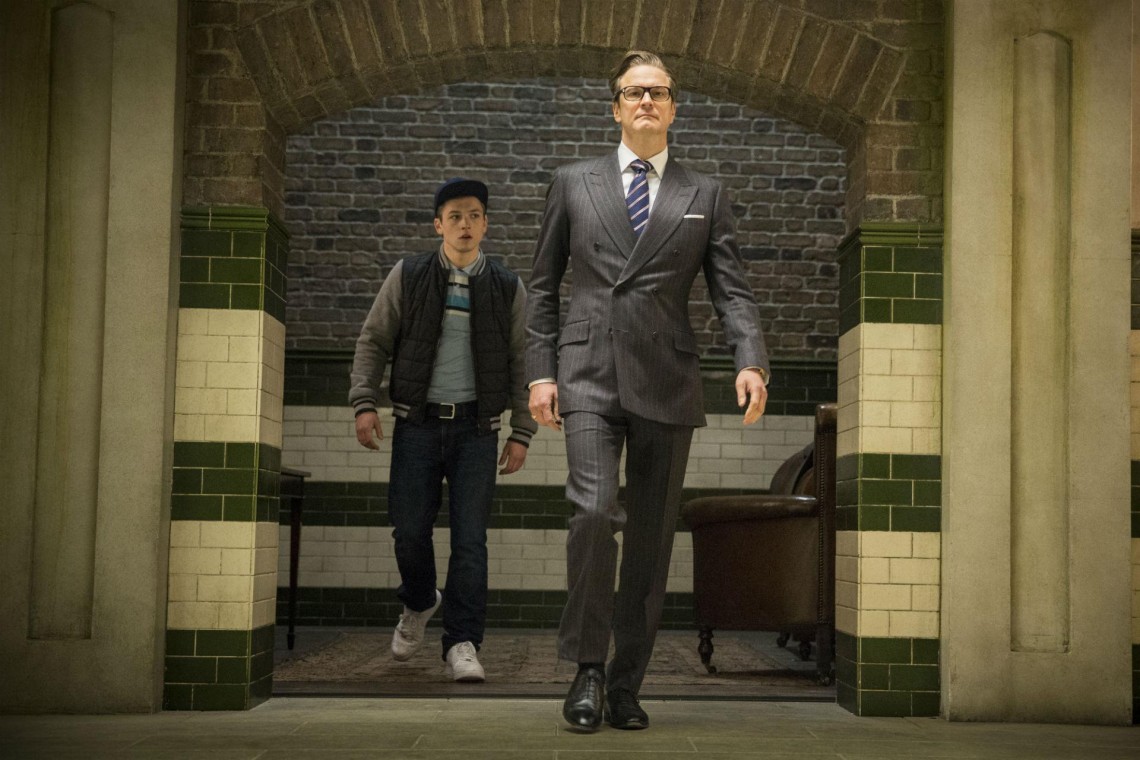 The mission of Kingsman: The Secret Service is to make the James Bond movie that has not been, to treat the earlier painfully-British entries from Sean Connery’s trilby-hat-wearing days with hyper action, while subsequently defying the broodiness of the Daniel Craig-era films with changed-up rules. Well, here’s a news flash for you, movie – the Connery-era Bond movies don’t need Mountain Dew-chugging X-Treme fight scenes shaken and stirred into their plots to improve their entertainment, and Skyfall is already a subversive ass-kicker itself, without resorting to shenanigans. That said, director Matthew Vaughn’s take on British spies tries way too damn hard to be the edgiest of the spy movie sub-genre, made by the same creators who thought juvenile gimmick Hit-Girl from Kick-Ass was a clever character.

Loosely based on the 2012 graphic novel by Mark Millar and Dave Gibbons, Kingsman: The Secret Service tells of a London hoodlum named Eggsby (Taron Egerton) who finds his way into a band of spies more mysterious than Bond’s MI6 crew. The group name themselves after the Knights of the Round Table, with CEO Arthur (Michael Caine) organizing the likes of Harry/Galahad (Colin Firth) and Mark Strong’s Merlin. Their headquarters can be accessed through a city suit shop that bears their name, and their gadgets create weapons out of various accoutrement like pens, shoes, lighters, rings, etc. The film is Eggsby’s humdrum origin story into being knighted, as he proves to be a singular talent throughout a Divergent-level sludge of training sequences. Eggsby uses his street-earned brawn and courage against uppity peers, encountering numerous life-or-death scenarios that make the association only seem vicious against their humane reality.

Intercut within Eggsby’s ascendance is the equally tedious plotting of the film’s villain, a billionaire named Valentine (Samuel L. Jackson, in some fly suits). A self-professed spy movie fan, he wanted to be a Bond but now he’s become the villain, but he also has a lisp and a distaste for seeing blood. His dirty work is executed first-hand by assistant Gazelle (Sofia Boutella), who has swords for legs. So revered by the world that his life story has been made into an awards-friendly biopic, Valentine’s plan involves turning our planet’s population into killers through free, brainwashing SIM cards. With Kingsman: The Secret Service taking more than just a glance at Watchmen’s playbook, Valentine sees a population lowering its numbers as a means to save the overall state of Earth.

Brought in as the movie’s initial ass-kicker, Firth is suited with the film’s best instances of action. In a movie that gets its kicks from mixing brows and class of high and low, his casting is the most efficient combo. He’s dapper per usual, and with a game attitude. If anything, it’s a pity that the movie doesn’t give more for him to do, with Egerton’s serviceable work as rookie Eggsby not making the film any stronger once he takes center stage.

It’s uncertain if a spy movie is always as good as its villain, but a plot is only as strong as the nemesis who forces heroes into action. Jackson’s Valentine is an aggressive yawn of an eccentric bad guy, whose lisp makes for a single joke that stands to lazily challenge the usual physical deformities in world-hating megalomaniacs. His presence considered wild enough, Jackson proves to be a lacking casting choice for an already underwhelming agitator.

Though posited as implausible genre glee, Vaughn’s fighting style has a sobering lack of stakes. Pimped-out gun battles and fisticuffs become robotic dance routines, lacking the vitalizing tension to make them exciting outside of showing off extensive choreography. Watching Mr. King’s Speech hit people is a unique visual, but he might as well be a CGI character despite Firth doing many of the stunts himself.  Even his finest moment, a surging free-for-all in the third act, only makes a great impression for how long he fights. When shoving its dull perfection in your face through such action, Kingsman: The Secret Service strictly shows that it has been stylized to death.

Vaughn’s film is proof that Bond has royally mucked up the spy genre, very likely until the end of the world finally ends, and that no movie that wants to vibe off the franchise’s influence can do so without acknowledging it. Kingsman: The Secret Service uses the comparison of other Bond films as a meta handicap, in which its plain subversion to the expectations is enough to make it seem dangerous, when it’s a less fun substitute to watching Austin Powers again. (The humor of Kingsman: The Secret Service flatlines with its simple opposite-choice attitude as well.) In the process, a conversation between Firth and Jackson about preferring “far-fetched, theatrical” spy films turns a wink into an eye-roll. And when characters later talk about themselves as players in a spy narrative, they only contribute to a tired self-awareness that doesn’t enhance the material, but claim to the audience a hollow canniness.

3 thoughts on ““Kingsman: The Secret Service””