Interview: How Jeffrey Combs Crafted The Psyche Of Would You Rather’s Villain Shepard Lambrick

When it comes to a movie like the new indie Would You Rather, you need a strong actor who’s as committed to the radical premise as the filmmakers want you the audience to be. This thriller stars Brittany Snow as Iris, a young woman drowning in medical bills, who accepts eccentric millionaire Shepard Lambrick’s offer to participate in a sadistic game of “would you rather” in return for the financial support she needs.

In many ways, this role is both familiar and unfamiliar for Combs. The character actor has attracted various subsets of fans after starring in multiple fandoms: He’s portrayed the star of H.P. Lovecraft’s Re-Animator series and appeared as the famous author himself; he played at least five different characters on various Star Trek series; and he’s voiced several characters in the DC Animated Universe.

Yet this might be the first brutally twisted character that Combs has been unable to make sympathetic for his audiences. Movie Mezzanine chatted with him about how Shepard justifies his insane games, what he thought of the movie’s ending… and of course, we had to ask him a “would you rather” question.

Jeffrey Combs: It’s an assault on your senses, psychologically. The things that creep me out are, like, the ice pick in the leg. It’s like, “Oh my God, no!” That makes me flinch every time I think about it.

NZ: What did you draw upon to play Shepard Lambrick? He’s twisted but still classy and has his standards.

JC: Reading the script, he’s front and center. He’s despicable. I always like to — in this one I don’t think it’s at all possible, but — I always like to tweak my bad guys so that the audience is maybe a little conflicted by actually being charmed by him or finding some aspect of him likeable. I think for Shepard Lambrick, that might be a bridge too far. There’s not much sympathy or empathy for him in this. I actually sort of liked that he was an enigma, that you never get to know him and that when you’re faced with sadistic power like that or somebody with a sociopathic nature, you’re never going to understand. That’s just sort of the most disturbing aspect of people like this, is that you’ll never be able to explore who they are because they don’t really have a soul, a center.

The director and I talked a lot about where he comes from and you really get a sense in the movie that this is kind of a legacy in this family, where it’s passed down from father to son. It’s not a game I [Shepard] came up with, it’s a game that I was indoctrinated in from a very young age by my father, and I’m doing it [now] with my son. It’s almost as if in a weird way I’m a victim of my upbringing. I don’t know anything different; this is normal to me. It’s almost like a cat is playing with an injured mouse — bats it around, takes great joy in its suffering. It takes a long time before a cat will kill a mouse. In a way, it’s sort of a really exaggerated extension of that.

On the other hand, there is a morality and an ethic that Shepard Lambrick does have. He doesn’t renege on his promise; he’s very proud of the fact that — “You see, we came through. You didn’t win and not get what you wanted. You won and you got everything that you did want. So we fulfilled our contract. We keep our word.” He takes great pride in that. There’s something really sort of sick about that. I don’t think you’re ever really gonna know this guy, so I had to resist any sort of attempt to flesh him out, understand him, give him a backstory. That’s what’s so chilling, is you’ll never get to the bottom of it.

NZ: Right! But then there’s that scene where his son Julian attacks Iris, and before they get back to the game, Shepard takes a moment to personally apologize to her.

JC: It’s just so awfully disturbing, isn’t it? Because in his world he thinks he owes her an apology because his son broke the rules here. What’s also scary is, someday Shepard Lambrick will not be there, and who’s going to be running this game but someone who’s even worse? I’m trying to teach you how to play this game the correct way, and the son — like any son growing up in that kind of weird milieu — is just going to think, “What are you talking about, man? There are no rules; I can do what I want!”

NZ: What was the shoot like — drawn-out or contained? High-energy, or was it necessary to take breaks?

JC: Very focused. We shot it in sequence, which is unheard-of in film. Usually someone is scheduled out of town, or we don’t have location at that date… But because we were shooting the vast majority in one location and in one room, we just started with the first scene we had together and we continued down the line. So we had a building, crescendo-ing sense of doom that we could all sort of latch into. Not like, “Wait, what happened before this?” Because it was like it had just happened. I just kept thinking with every sequence, My God, that was terrific! It just kept getting better and better and better. The focus goes to a different person; everybody kept stepping up. Great ensemble cast — and none of us knew each other before that! That’s a statement to David and the producers really meticulously picking the right people for the roles. 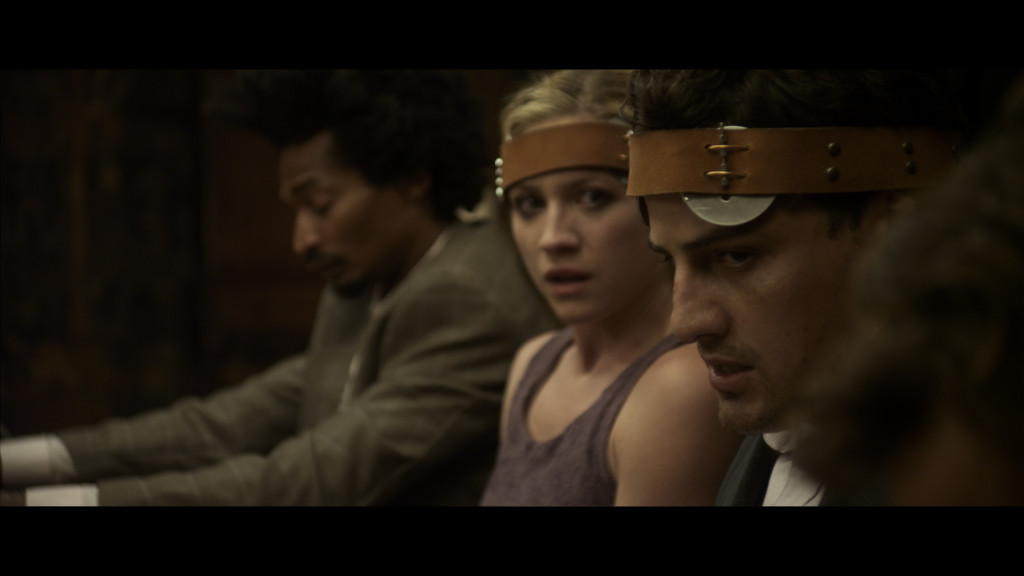 NZ: Were there ever moments that you dropped character?

JC: Well, I’ve been doing this a long time. When you’re in-between the lines, when you’re shooting, your focus just zeroes down into this. Your shutters go down; you’re just really in the zone. That’s the same with everybody. Of course, there were a lot of moments of laughter and relief. God, we had to, you know? But then everybody knows how to circle back around and get back to the intensity. I think also there’s a lot of dark humor in this piece. We were able to calibrate and not go too crazy. I just didn’t play Shepard crazy. I simply played him as “Isn’t this fun? I’m excited to play the game again.” I think it’s annual; there’s a lot of preparation to it.

It’s kind of like making a movie: “Hey, here we go!” You never know what’s going to happen, you have to kind of be flexible. We had a terrific time together, and it was shot in about three weeks. It wasn’t too terribly rushed, but at the same time there had to be a certain kind of efficiency. I think this production was so blessed in that we didn’t have overages, we always stayed on schedule. We were never a day or two behind. It was like a well-oiled machine; that doesn’t mean there weren’t problems but obviously we’re right on schedule. We were blessed that way.

NZ: You may have already gotten this from other journalists, but I couldn’t resist asking my own “would you rather” question. I found a great Reddit thread with really challenging ones, so here we go: Would you rather be forced to join Scientology, or name your first born child “Abortion”?

JC: I’d rather go with Scientology! Because I can always run for the hills and get out of there after the indoctrination. Naming your child that, that’s awful.

NZ: Well, unlike the challenges in the movie, there was a loophole in the Reddit thread: Someone responded to that question, “Little Abby is doing just fine, thanks.”

Would You Rather opens in theaters February 8th.

Next: Combs and I discuss the ending of Would You Rather, so beware of spoilers.

Spoilers for the ending!

NZ: I have to admit, I guessed the ending right before it happened. But I was impressed that you guys went to that extent, of having Iris’ brother kill himself while she’s out. Which of course renders her sacrifice irrelevant!

JC: On second viewing, there are several clues about what the brother is going to do. There are shots at the beginning of the movie where he’s saying, “Yeah, I think you oughta go out” and “It’s OK, I’ll just stay here.” There’s almost one shot where, once you know, you go back and watch it again: You see him make the decision, I’m gonna kill myself tonight. It’s really subtle because it’s internal. He can’t show it because he doesn’t want her to see it. He sees this as all is lost, bills can’t be paid, she doesn’t have a job, I am a drag on her having a better life. I said this to someone else — this is The Gift of the Magi.

NZ: That’s exactly what I said!

JC: He’s giving up his life so she can have a better one. She gave up any sense of being a whole, healthy, complete and moral person for the sake of her brother. Because once she blows that other guy away, she has crossed the rubicon here. She is a monster. It’s a choice she had to make, to break her soul, in order to save her brother and she wins the money she wins the operation and her brother has sacrificed himself for her. And they’re both lost.

NZ: And of course Brittany Snow is the perfect person for this. I’ve been following her career since American Dreams in 2002; she plays that great combination of hard-edged and sympathetic. How was it observing her in this role?

JC: She is the rock, the moral fiber, and it’s her journey. People care about her; she has such legitimacy and honesty and contained hysteria throughout this movie. She is who the audience says, “Oh my God, that’s me!” I don’t know if I would hold up as well as her, but my God, she’s in over her head. That’s what’s really important with these movies, is that you always have to have somebody that you care about, that their well being is important to you, that you’re invested in emotionally. And that’s not so easily done. A lot of horror movies don’t even bother with that. It’s just “set them up, knock them down, what’s the next ghoulish, unmotivated piece of graphic nonsense to top ourselves?” With this one, there is an emotional core that she personifies. I think she is just so terrific. I could see it on-set. Everybody was spot-on.

2 thoughts on “Interview: How Jeffrey Combs Crafted The Psyche Of Would You Rather’s Villain Shepard Lambrick”