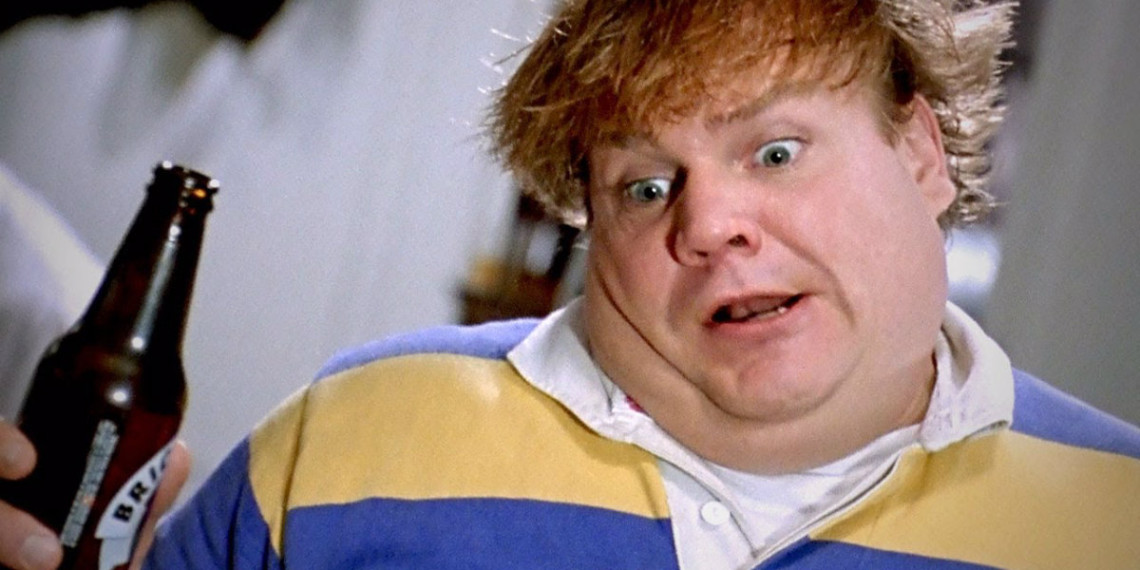 “I Am Chris Farley” Avoids Exploring The Man’s Dark Side

Toward the end of I Am Chris Farley, Brent Hodge’s biography of the late, great comic force of nature, Bob Odenkirk measures the tragic circumference of Farley’s death in one quote: “It’s just rare that a person has that much joy, and brings that much happiness to everyone around them. But with Chris…there’s a limit to how wonderful it is to me. And that limit is when you kill yourself with drugs and alcohol, you know? That’s where it stops being so fucking magical.” By happy accident, Odenkirk’s words summarize the film’s structure, too, though Hodge focuses more on the wonder of Farley’s spirit than the heartbreak of his passing. I Am Chris Farley is a warm and touching commemoration of its subject, but it’s also awkward and evasive, like your parents consciously avoiding talking about how grandpa died.

Calling the doc a puff piece would be unfair. Farley was, by all accounts, a pretty terrific guy, well-liked by his friends, family, and peers, so any movie Hollywood produces that tells of his life and times is naturally going to cast him in favorable light. But I Am Chris Farley doesn’t really care about the circumstances that put him in an early grave, or, put better, it doesn’t want to unpack them. You can do a Google search and find the details of Chris’ lonesome demise without troubling yourself beyond hitting a few keystrokes. That’s not the issue. No, what holds the film back is how skittish it is about diving into the factors that allowed Chris to flirt with sobriety until he couldn’t anymore.

Maybe that’s not all bad. Hey, maybe there isn’t even a story there, or at least a story we don’t already know far too well. Earlier this month, Asif Kapadia’s Amy made a study of Amy Winehouse’s losing battle with addiction, spurred on by men with vested interest in her commercial success; Kapadia’s film does the reverse of what Hodge’s does by profiling the vultures who exploited her, and examining the pop star meat grinder that encourages people to alternately exalt and dismantle celebrity with casual cruelty. I Am Chris Farley isn’t that film. You get the sense that Hodge wanted to make that film, but only fleetingly, and generally only in talking-head interviews with Bob Saget, Lorne Michaels, Odenkirk, and Chris’ brother Kevin.

These names make up a small percentage of the veritable crowd Hodge has called to his aid in memorializing the man who wrote himself into legend by playing the worst motivational speaker in the world. If anything, I Am Chris Farley’s lengthy guest list proves Hodge’s point far better than a 90-minute testimonial to the high quality of Farley’s character ever could. Chris was loved. Hell, he still is loved, almost two decades after his funeral. A movie like I Am Chris Farley could only exist on the strength of that love, that adulation, that lingering, haunted fondness. When Hodge gets close to the edge of catharsis, the film toes the line of getting somewhere. Every time the camera is on Saget, we can see his eyes begin to well up, and we can hear a lump crystallizing in his throat. He has so much more that he wants to say. It’s painfully obvious, but the film doesn’t let him say it.

Odenkirk, too, pushes us close to real talk about Chris’ fatal overdose. That aforementioned quote is delivered with all the contempt of a person who has something meaningful to say. But Hodge pushes back harder, and I Am Chris Farley remains mostly harmless. That’s an enormous shame. Hodge reminds us, through archival footage, of what made Chris such an incredible funnyman – his commitment to the act, his driving need to make everyone around him laugh, and his genuine humanity. The movie gives us each of these in spades. It’s a fine way to remember Farley’s career, and a pleasant way to kill ninety minutes, but when all’s said and done, too much remains both unresolved and unspoken. Hodge preaches to the choir. We know everybody adored Chris. I Am Chris Farley might have told us something we don’t know, but disappointingly, it sticks to fluff instead.