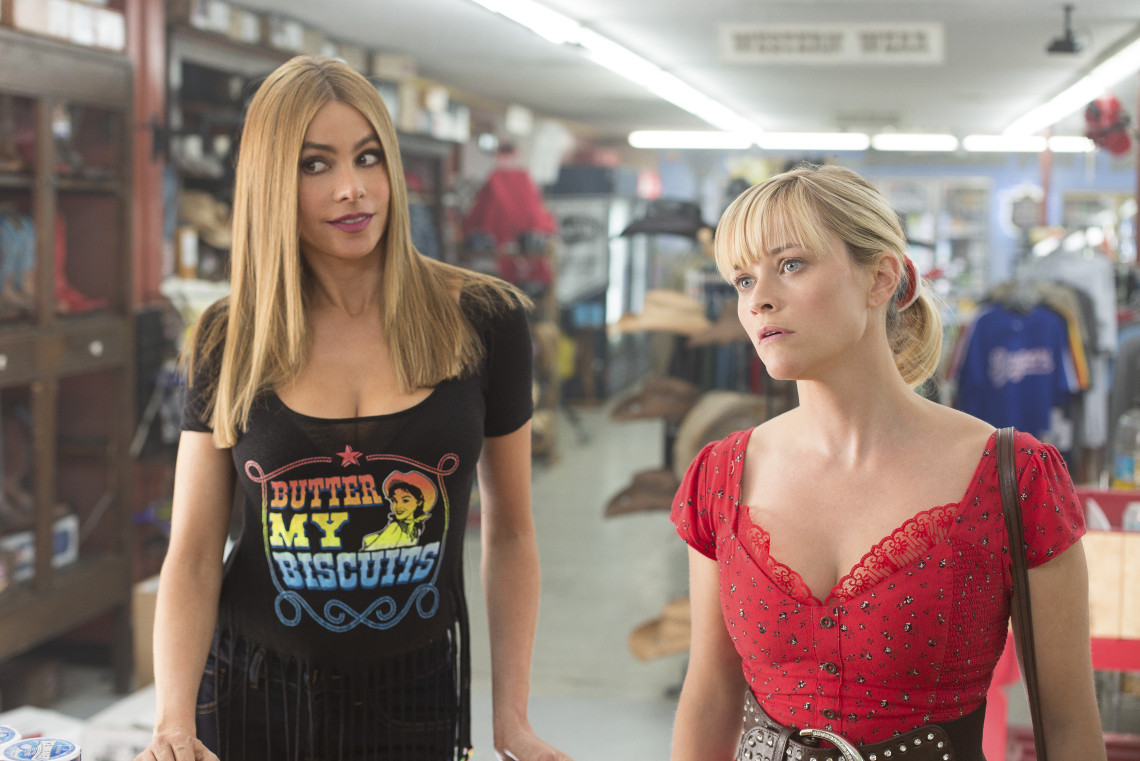 Hot Pursuit doesn’t aspire to much. It’s basically a throwaway lark that you can easily imagine producer-star Reese Witherspoon cooked up as a way to kick back and relax after exhausting herself with the performance of her career both in front of and behind the camera in Wild last year. This is a throwback to those old ’80s comedies you always find yourself watching way too often on cable on hungover Sunday afternoons.

It’s also very funny, and much smarter and more subversive than it looks.

Witherspoon stars as Cooper, a stumblebum deputy banished to a podunk Texas county evidence room after overzealously tasering the mayor’s son during a keg party one fateful evening. (She misconstrued what it meant when the kid called “shotgun.”) Thanks to a flukey footnote in federal law, she’s now the female officer assigned to accompany high-risk witness Daniella Riva (Sofia Vergara) on a road trip to Dallas for testimony that might bring down the entire cartel. But really, Cooper is just here to fulfill administrative functions and stand around while Vergara goes to the bathroom.  Boys do the rest.

That all changes when everybody starts getting shot, and before long, Witherspoon and Vergara are all alone being framed for murder and hounded throughout Texas by crooked cops, cartel hitmen, plus one pretty good-looking suitor. The two spend most of Hot Pursuit handcuffed together, spitefully hurling invective at one another while allowing us to enjoy the simple comic bliss of the diminutive, dowdy spitfire shackled to the gargantuan sex goddess. It’s a great sight gag that never gets old.

What’s so refreshing about the movie, which was directed by Anne Fletcher, are all the sly little feminist digs you can assume a producer like Witherspoon helped work into the proceedings. These two gals are constantly being underestimated – Vergara for her sheer va-va-voom and Reese for her clenched, constipated carrying-on. (It’s a glorious comedic performance, as if all Tracy Flick’s Type A tendencies imploded into a twangy black hole of Witherspoonian repression.) And yet when push comes to shove, they rise to the occasion.

Coincidentally, I was just reading Jane Fonda’s memoir right before heading out to the theater, and the best parts of Hot Pursuit have a good-humored 9 to 5 kick, as when the two fend off a couple of murderous male predators simply by talking about their periods. (Sofia Vergara’s pronunciation of the words “uterine walls” is downright superheroic.) There’s also a great bit when they foil Jim Gaffigan’s would-be vigilante by play-acting as lipstick lesbians until he shoots off his own finger in horndog apoplexy.

What’s neat about Hot Pursuit is that it’s always “punching up,” as the kids say these days, positioning our heroines as perpetual underdogs and having a great laugh at the expense of the idiotic men trying to chase them down. They’re only really threatened by each other.

But oh, what fantastic threats they are. Vergara is too often looked at as a figure of pity by my more enlightened liberal pals who can’t seem to understand she’s a smart lady giving a performance. Vergara’s actually giving several performances here, too – playing into stereotypes on purpose yet always the savviest person in in room, outwitting the DEA and cartels and such.

Reese rocks, as usual – fearlessly scrunching up and playing down her stature even while Vergara keeps referring to her as “the little lesbian.” (I know I have been saying this ever since Freeway back in 1996, but I still want to marry Reese Witherspoon.)

Hot Pursuit is a crappy-looking movie, but it is exceptionally well-edited. Fletcher (a rom-com  MVP who most recently helmed the not-bad The Guilt Trip) knows when to get the hell out of a scene, and this one goes fast, fast, fast. There’s none of the slack Judd Apatow improv-school of waiting around to shoot what happens next here, which makes the movie feel insanely propulsive by our current 135-minute-comedy standards.

It’s a fun movie. Nothing more, but nothing less either.