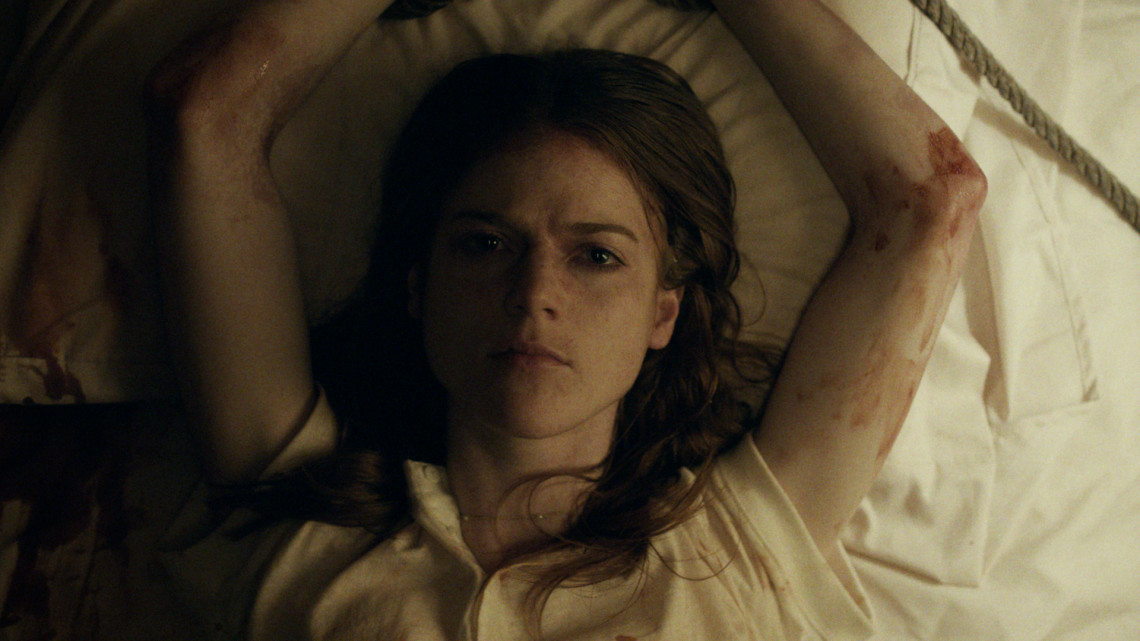 Honeymoon — or the more aptly titled, I’m Fine, Really —is an unrelentingly dough-headed horror-suspense yarn dressed up in the saggy skin of a relationship parable. It might help if the couple in the spotlight were one worth investing in, one that reflected any semblance of reality or relatability, and one that wasn’t in constant service of a go-nowhere plot and a screenplay that seems to be 75% made up of dialogue consisting solely of the two characters’names, Bea (Rose Leslie, HBO’s “Game of Thrones”) and Paul (Harry Treadaway, Showtime’s “Penny Dreadful”).

Though not without potential, Honeymoon never becomes anything more than a pre-credits teaser of a lower-tier “X-Files”episode eked out to feature length. It even provides the same lack of resolution and depth of such intros. Bea and Paul are newlyweds, elated to spend their titular getaway in Bea’s family’s secluded cabin. Cue the dread and odd goings-on: a spotlight impaling the windows of the cabin while the couple sleeps, and the catalyst for all ensuing weirdness, Bea’s naked pre-dawn sleepwalk into the woods. What follows are plenty of parallels to soured couples who feel like they don’t know their significant others the way they used to, though made much more explicit, as it’s immediately apparent Bea’s body has most definitely been snatched. It’s airy nosh for thought, quickly festered by too many phony hysterics and crass imagery, evoking the work of better and more nourishing filmmakers like David Cronenberg, Andrzej Żuławski, and even Steven Spielberg.

But it’s not the transparency of the filmmaker’s influences, or the amorphousness of the silly plot that makes this film a non-event. It’s the absolute torpidity of Bea and Paul’s relationship, not just to each other, but to the world as we know it. Too much time is spent with them in isolation, barely acknowledging the world beyond the woods. When new characters are introduced, they’re only done so as portents, not people. What little backstory is offered is so arduously monkey-wrenched in that only its awkward superfluousness registers. Marooning this pair of shrill dopes who seem allergic to asking the right, obvious questions doesn’t generate the kind of fraught tension of something like Lars von Trier’s Antichrist, but rather makes a compelling case that this is where they belong: far, far away from society. As dread is meant to mount within the cabin, it only leaves the room, gets in the car and goes on its own vacation.

It’s difficult —and likely with very little reward —to determine exactly what co-writer/director Leigh Janiak, making her debut, hopes to impart in Honeymoon regarding the relationship dynamic. Is it meant as a cautionary tale of fractured communication? A domestic abuse allegory? A manifestation of a fear of parenting? These germs are tossed up but splatter to the floor like brainless worms. The script bungling is a notable shame, since it slights a pair of hefty performances from Leslie and Treadaway, Scottish and English actors, respectively, playing Americans (though Treadaway has an easier time affecting the accent), who often hit the exacting notes of pleasure and pain they’re graphed to play. But the show is too easily stolen from them by utter pointlessness.

One thought on ““Honeymoon” A Phony, Unrelentingly Silly Horror-Suspense Yarn”