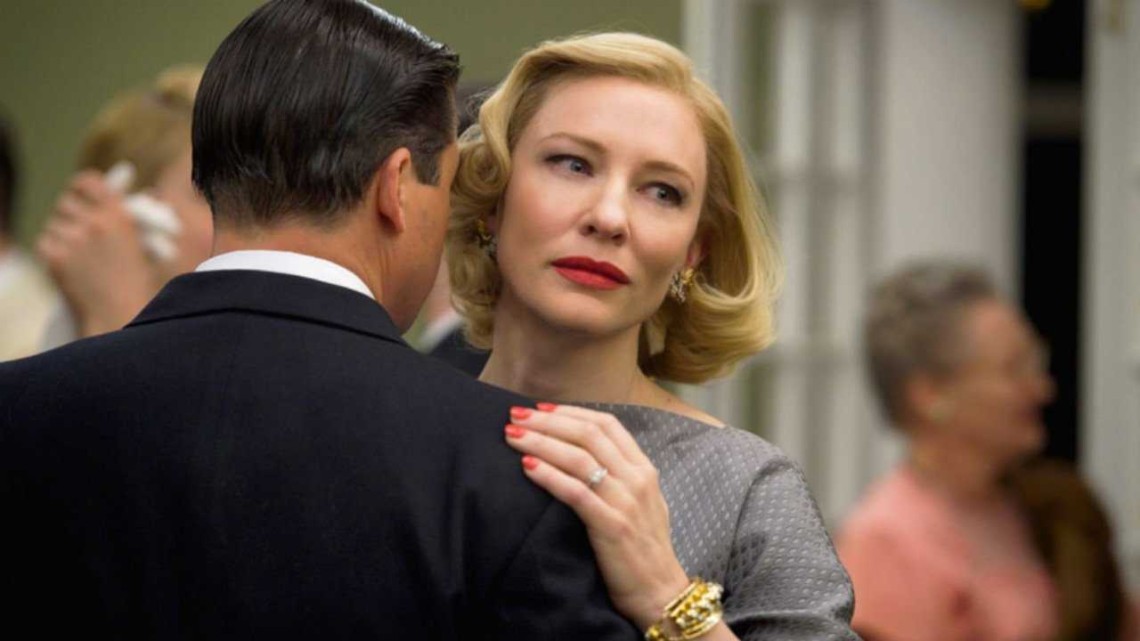 “Carol” Is A Hollow Exercise in Style

Carol is a well-made, technically proficient melodrama armed with a compulsive visual evocation of the time in which it is set. Director Todd Haynes’s latest is a sumptuous walk through the 1950s Spiegel catalog, taking its time to dote on and savor the shallow material things one covets. Like his more successful 2002 film Far From Heaven, Haynes tells the story of forbidden romantic longings against the backdrop of a more restrictive era. Unlike that film, Carol is less an homage to Douglas Sirk than a tribute to the gorgeous artificiality Sirk used as a cover for his subversive whims. Without the Sirkian sleights-of-hand Haynes masterfully evoked in that prior film, Carol comes off as a hollow exercise in style.

Haynes uses Patricia Highsmith’s novel The Price of Salt to return to the period and color palette of Far From Heaven. Cinematographer Ed Lachman’s work is as astonishing and brilliant on Carol as it is in Heaven; if nothing else, the colors pop off the screen with enough force to inspire swoons from the audience. If only the love story held the same sway for me. At my New York Film Festival screening, people openly wept as the credits rolled, yet I felt nothing of the emotional sort. Instead, I was nagged by something I could not put my finger on, something that required a second viewing to better examine my ultimate dissatisfaction.

Cate Blanchett plays Carol, a wealthy woman whose marriage to Harge (Kyle Chandler) is ending with some acrimony on his part, feelings that complicate the ensuing custody battle for their daughter. Carol keeps the origins of their marriage unexplained, but infers that their union was more for societal reasons than actual love and passion. Harge doesn’t want a divorce, and he casually tries to blackmail Carol with the revelation of her infidelities with a woman named Abby (Sarah Paulson). That relationship has long since ended, though Abby remains in Carol’s life as an older, wiser friend and advisor.

In the film’s opening, Carol hastily exits a restaurant, casting herself into a rain-soaked New York City evening. Carol then takes on a flashback structure to show how we got to this moment. We learn that Carol met her dinner companion, Therese (Rooney Mara), in a department store where she is a salesperson in training. Therese’s introverted demeanor freaks out her manager and the customers, so she vows to be more outgoing. Carol is the first recipient of Therese’s new, friendlier brand of customer service. An instant, though unspoken and understated, spark occurs between the two women. Their business transaction ends with Carol leaving her gloves behind. Since Carol lives not too far away in New Jersey, Therese decides to return the lost items to her. The seeds of a romance are soon planted.

Allusions to 1950s cinema abound in Carol, Easter eggs just waiting to be discovered by happy cinephiles who’ll mistake them for sustenance. The use of gloves as an object of romantic implication immediately conjured up memories of Marlon Brando with Eva Marie Saint’s glove in On the Waterfront, a classic set in the same timeframe and location as Carol. Brando, or more specifically Stanley Kowalski, is also alluded to in Chandler’s performance as macho brick wall Harge. In a film of good-to-great performances, Chandler’s stands out as the token bad one. Clearly Harge is in pain, but Chandler plays only one note of villainy. All he needed was a mustache to twirl, or in keeping with the period, a greasy A-shirt whose shoulder straps he could twist ad nauseam. He is used solely to stack the deck for us to root for the budding relationship between Therese and Carol.

Carol builds its romance by sending Therese and Carol on the ever-reliable staple of bonding, the road trip. “See the USA in your Chevrolet!” as the old ’50s radio commercials used to say. Throughout the trip, the duo try not to arouse suspicion while tiptoeing around their feelings for one another. The film plays these moments quite well, culminating in a moment of motel-based suspense and shock worthy of Hitchcock. As viewers, we’re conditioned to the Hollywood notions that same-sex romances can only end in disaster and/or death, and Haynes plays on those fears successfully. The film’s ending may or may not be what viewers suspect.

On my second viewing of Carol, I realized what bugged me about it. Everything is just too formal and painstakingly staged, as if the slightest breeze would blow it off the screen and into oblivion. There is pain in the story, but we’re never allowed to experience it as anything other than a construct. Of the three actresses, Paulson gives the most interesting performance simply because Abby feels lived in—she embodies the hardened yet comfortable-in-her-skin veteran Carol may become as a result of her experience with Therese. Her appearance feels real; it’s not the constant Audrey Hepburn imitation of Mara’s look or Blanchett’s perfect makeup that never cracks even in crisis. (Carol’s red-red-RED lipstick would give the Rocky Horror Picture Show lady spasms of jealousy.)

Mara, who won Best Actress at Cannes, has the hardest role to play here, and she does an excellent job portraying uncertainty laced with the kind of daring one only has when young. Blanchett’s is fine, though her performance unfortunately fits with Haynes’ overly fetishistic take on the 1950s. As good as they are, they just felt like placeholders for me, as the real star of this film is the way it looks, not the story it tells.

I hate being on the fence here, but for all its cinematic joys, I can’t recommend Carol. It left me emotionally cold, but led me to conclude that if the love story works for you, this is a masterpiece. All I was left with was a meal so daintily presented it should be served under glass, to be looked at in reverence but never consumed.

5 thoughts on ““Carol” Is A Hollow Exercise in Style”