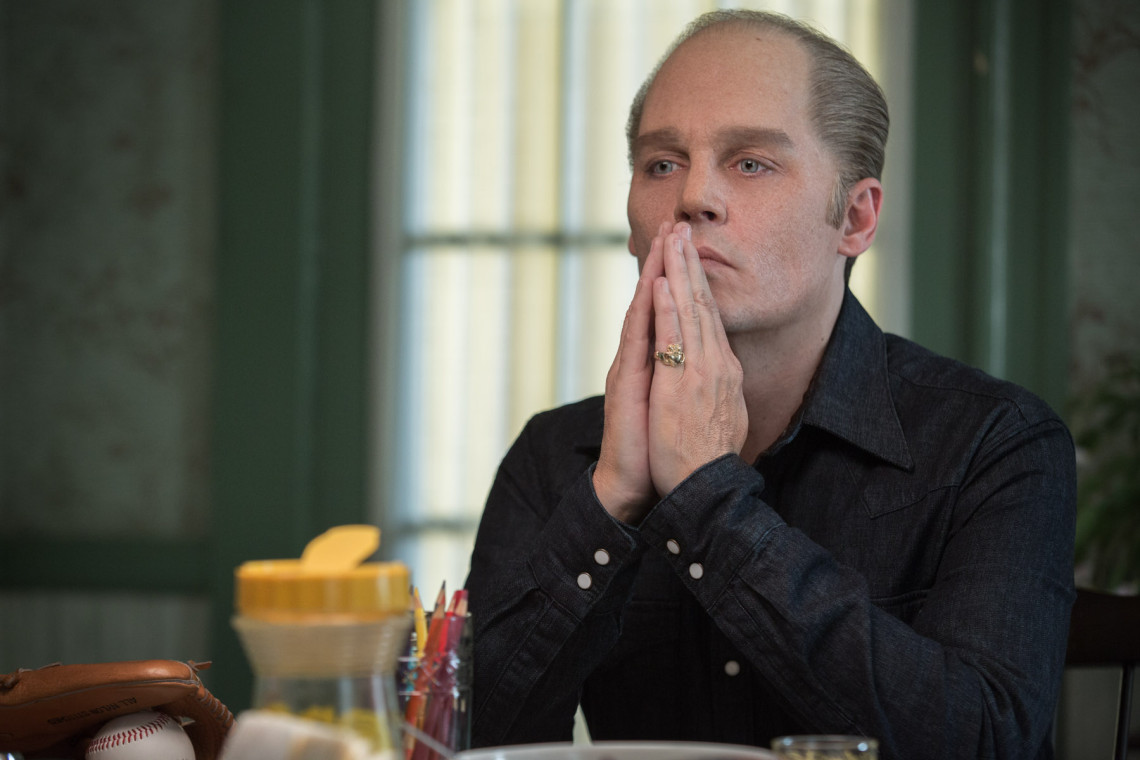 “Black Mass” Is An Ugly, Droning Nothing Of A Movie

What an ugly, droning nothing of a movie director Scott Cooper’s Black Mass turns out to be. This much-ballyhooed (at least here in Boston) take on the frankly exhausted Whitey Bulger mythos has nothing new nor particularly interesting to say, cycling through over-familiar scenes without a discernible point of view and absent any compelling reason to exist. Watching the film is like reading Whitey’s Wikipedia entry: Here’s a list of some shit that happened.

Said shit involved one James “Whitey” Bulger, a scumbag who was hailed for decades as a Robin Hood figure in the absurdly over-mythologized and deeply bass-ackwards neighborhood of South Boston, at least until his lieutenants came forward and started showing Feds where all the bodies were buried. But Whitey got away with everything for so long because acting as an informant, he helped the FBI take down the Italian Mafia, leaving these streets safe to be run by rampaging Irish pricks the way God intended.

Based on the best-selling book by Dick Lehr and Gerard O’Neill, Black Mass tells the official, FBI-approved version of the story that everyone in their right mind assumes is horseshit, sticking to Bulger’s defense attorney’s line that Whitey never actually ratted anybody out, and that –conveniently enough– the entire Federal Bureau of Investigation was hoodwinked for over 20 years by a single lunkheaded agent from the neighborhood named John Connolly.

If this is all sounding a bit familiar, that’s because Boston-born scribe William Monahan already pilfered the best parts of our Whitey saga and played them as a sicko comedy in his screenplay for The Departed. (That movie weirdly won a couple of Oscars, you’ve probably heard of it.) But we gotta admire the sheer balls on this guy Scott Cooper — who else would look at a story that Martin Scorsese and Jack Nicholson just told less than 10 years ago and decide that he can do it better with Captain Jack Sparrow? Dude’s got brass ones.

Johnny Depp plays Whitey Bulger in Black Mass, or at least I think that’s Johnny Depp underneath all the bizarre prosthetics. Wearing an oversized bald-cap that makes him look like the alien leader in a fifties sci-fi movie, plus a prominently rotting front tooth, ice-blue contact lenses, and jaundiced skin with blatant makeup lines visible from the back row of the theatre, he looks like we’ve just run into him on his way to losing a Halloween costume contest at a crummy bar.

The media narrative that’s emerged recently is that after a long time in the wilderness, Depp is finally “a serious actor again” now that he’s pounding his fist on the table and shouting the f-word in an Oscar-grubbing studio drama. Speaking as a fan of Depp’s inventive, very funny physical work in sadly unloved films like Dark Shadows and The Lone Ranger, I don’t quite get the big difference here because he’s still wearing a ton of makeup and talking in an insane accent. This performance just happens to be boring, as if they dumped a ton of Madame Tussaud’s wax on his head so he could pretend to be Ray Liotta.

Depp wears the collar of his black leather jacket turned up like a cowl and hangs out in the belfries of churches. Once he’s even photographed while sleeping from overhead, as if in a coffin. The increasingly grey fake hair jutting out the sides of his alarmingly immobile latex skull is swept up like batwings. We get it: Townie Nosferatu. Problem is, Black Mass doesn’t give him anything else to play. He’s a one-note ghoul, running endless permutations on the “Whaddaya mean I’m funny?” scene from GoodFellas without ever being funny in the first place.

Mark Mallouk and Jez Butterworth’s ambitious screenplay for Black Mass begins with Bulger cronies Kevin Weeks (played by Jesse Plemons of “Breaking Bad” and “Friday Night Lights” fame, still looking like Matt Damon’s twin brother who lost that particular genetic lottery) and Johnny Matarano (“Deadwood”’s own W. Earl Brown) turning rat and telling the real Whitey story to the FBI. But the movie can’t be troubled to keep up this structure for very long. Still, it sets up Cooper’s entire aesthetic approach: people sitting across a table from one another in empty industrial spaces, telling what he should be showing.

I’d wager that at least 80% of Black Mass is ugly people in bad wigs sitting at tables in nondescript locations, speaking names that will only ring a bell if you happen to be from my hometown. Cooper shoots everybody dead-center in the middle of the frame, talking directly into the lens.  There’s no arc to the story, no rise and fall, just bullet-points over two decades. Whitey killed a lot of people and got away with it until he didn’t anymore. The filmmakers have no angle, no larger themes. The depositions haven’t been sculpted into anything resembling a story. It’s a dull recitation of tired material that will feel like the Stations of the Cross to anyone who reads The Boston Herald.

Joel Edgerton is an embarrassment as John Connolly, supposedly the Judas of this Passion Play and yet I can never get a read on this guy, no matter how often Hollywood tries to shove him down my throat in leading roles. He’s a potato-faced oatmeal sandwich of bland, giving nothing. Most of the dudes here just drop their R’s and act with their neck muscles, including Peter Sarsgaard in a career-worst cokehead turn. The only male actor having any fun is Kevin Bacon as a fictitious FBI supervisor, delivering a broadly comic performance violently at odds with the rest of the picture, but indicating that Marty really missed the boat not finding a spot for him in The Departed.

I did like the women, though. Regular movie-savers Dakota Johnson, Juno Temple, and Julianne Nicholson pack a whole helluva lot into a miniscule amount of screen time, hinting that maybe the only way this sapped material might feel fresh again is if someone hits it from the female point of view. Hell, any point of view would be greatly appreciated here. Black Mass is just a long, unpleasant list of shit that maybe might’ve happened.